After over 45 years of disrupting the media, Troma explodes into 2019
with their latest production, MUTANT BLAST! 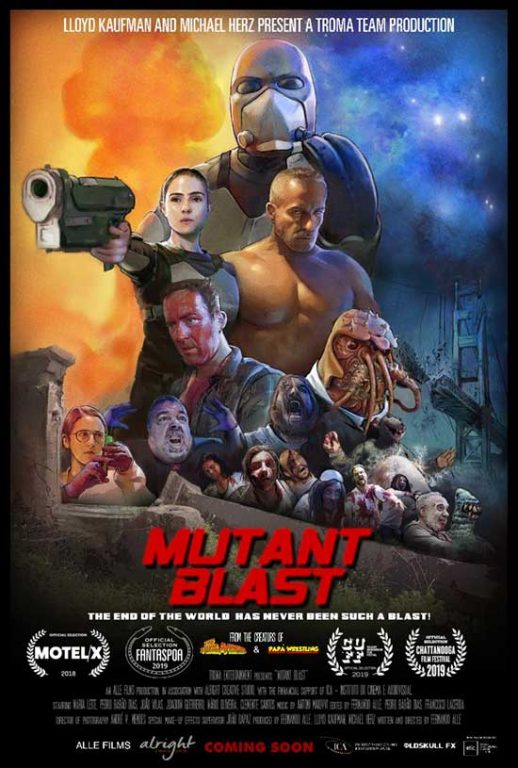 After exploding in the ether with its thrilling, tromutant theatrical teaser and blasting minds and bodies of everyone who’s seen it, visionary director Fernando Alle and producer/creator of The Toxic Avenger Lloyd Kaufman have premiered the all-new brain crushing trailer for Mutant Blast, sure to become the hottest new addition to the Tromaverse, only on Troma Now!

A man with superhuman strength, a ferocious, fearless female soldier and a slacker with a little furry friend for a hand (not to mention a mean hangover) must band together as the human race’s only hope for survival against a zombie apocalypse in a world that’s about to become a nuclear wasteland!

Fernando Alle’s remarkable work on Lloyd Kaufman’s Return to Nuke ‘Em High saga resulted in Troma Entertainment releasing Alle’s impressively violent early films Papa Wrestling and Banana Motherfucker on Troma Now and DVD! Kaufman has gone on to say about the director: “Fernando is an extremely talented filmmaker, and he also created the prop dog that we threw over Niagara Falls in Return to Nuke ‘Em High Volume 1, which received one of the biggest laughs from the audience! I can’t wait for Troma fans and audiences to see Mutant Blast in it’s full uncut, wild glory!”