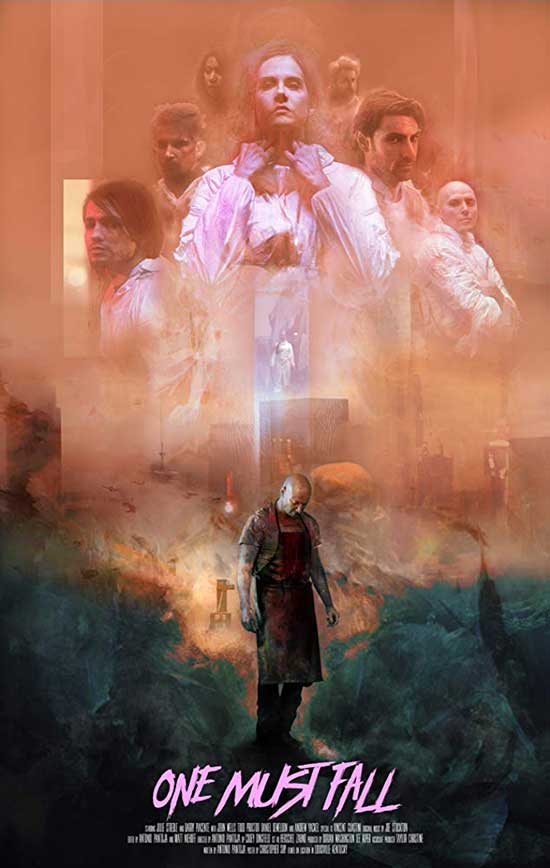 A horror-comedy slasher set in the 80’s about a woman wrongfully fired from her office job and forced to take on a temporary job on a crime scene cleanup crew. With a maniacal serial killer on the loose leaving them lots of work, did he ever leave the scene of the crime?

When I was, oh, ten or so I got my first glimpse of the master director of the suspense film, Alfred Hitchcock, and his paean display of psyche under fire in 1944’s Lifeboat. The plot of that picture was one very rooted in the World War II environment that engulfed both country and world at the time. About the survivors of a torpedoed merchant ship who end up in the same lifeboat as one of the men of the U-boat responsible for the first ship’s sinking. What it really boiled down to was a character study of humanity’s ability to cope under the most extreme situation of stress and duress. It is our determination to survive that forestalls a complete withering of our mental state. The formula of the motley group thrown together by circumstance and forced to roll with these punches was just one more notch on the illustrious career belt of Hitchcock. It’s also a formula that has proven reliable in other genres (John Carpenter’s more crime and exploitation-oriented shocker Assault on Precinct 13 from 1976 comes to mind). Yet I’ve often wondered how it would play out if you juxtaposed it with a serial killer chiller. By rights that would present an odd mix as serial killers would not likely be targeting a group for one kill and they tend to pick and choose a type before any attack. Up-and-coming helmer Antonio Pantoja more than meets the challenge of creating a funny, deliriously original construct that offers up a killer who embraces luck even if it mucks up his modus operandi some.

Sarah has just been fired from her office job by her lecherous boss as fallout due to spurning his sexual advances. To make ends meet, she takes a temporary job as part of a crime scene cleanup crew. The crew’s latest job takes them to a warehouse where there are all sorts of corpses littered about and one very active serial killer still lurking on the premises. A kidnapping and more killings abound as Sarah and her co-horts fight for both their sanity and their lives, even as they seek a way out of this chamber of horrors. 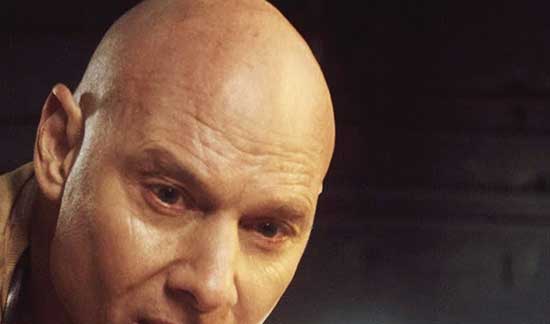 Pantoja really shows a flair for injecting complexity along with the buckets of blood, blending the elements into a brand new grue. I found myself quite intrigued by a display early on of another human monster, that of the scheming and sexual harassing Brad, to compare and contrast with main beast. Is this a nod that evil predator types come in many forms?

No doubt. And, while there is humor in Sarah’s creeped out response to Brad’s advances, it contrasts wildly with the stark terror and revulsion she feels later in the grips of the no-named murderer (referred to only as the Killer in the credits). That he allows for the antagonist dialogue that is a treatise on religious beliefs and the notion of how quickly God answers prayers and to whom he does it for will either have you ruminating for some time after the end credits roll or at least gripped by the killer’s ideology. In truth, I found myself doing a bit of both, which is rare in this age of spewing horror fodder out of a machine for the fastest buck profit imaginable.

Serving dually as screenwriter for this affair, I found it refreshing that Pantoja knows how to display humor that is not forced or awkwardly inserted into the story. The difficulty that many directors and writers have in creating a piece that is both chilling and funny is that the right level ends up being not quite achieved, with one being dominated by the other. Pantoja keeps things on the most even of keels by having the guffaw bits come from the characters naturally. A flow that would seem plausible in a real-life similar circumstance. One of the best exchanges, a sequence that had me convulsing in laughter so much that I had to pause the viewing, is between Sarah and a cleaner co-worker named Todd and is as funny for its casual unfurling as it is for the wording itself. 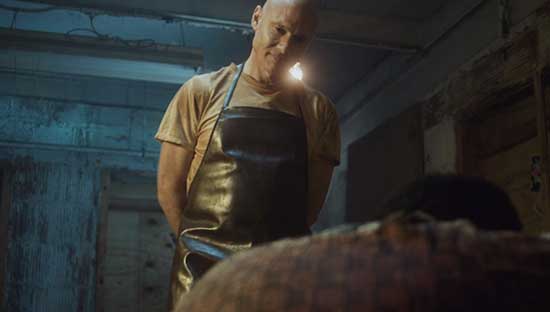 Sarah: “You’re eating a sandwich?” Todd: “Yeah, why? You don’t eat meat?” Sarah: “No, I don’t”. Todd: “Fucking vegans. If we were not meant to eat meat, why are animals made of food?” The irony that this is said while standing near and over mutilated corpses made it ever more priceless.

Filming was done entirely on location in Louisville, Kentucky. Though I couldn’t find the name of the warehouse location used, it appears very much like the foundries often used for their bleak, rusted, dark and metallic look (recalling the finale of the original classic Blacula from 1972 at the moment) that suggests bluntly dank and depressive. As if Pantoja wanted to present some physical manifestation of our heroes unknowingly entering the twilight zone of the psycho mind when opening the door to this building. The trap is set once the door closes and locks.

In fact, it is once this door closes that the real thrust of Pantoja’s script is played out. That is the afore-mentioned courage under fire. It is eminently compelling to watch the mindsets of each player unravel as the gory antics commence. Remember the base instinct notion of fight or flight? Once the human being is stripped to their soul due to the violent acts around them, it seems what is left is the fight or flight reaction. It reveals truly the type of being we are under this intensive duress. Only a director with confidence in his cast and script would allow the camera eye (and, indeed, his own instinct) to put the focus on the emotions and reactions of the actors. Many lesser types would quick cut to gore, kill scenes and the endless chase while editing with hyper-kinetic abandon. Equally, a talented cast is required to engage the audience enough that they do not recognize the scene is actually playing out for two minutes while the camera hasn’t shifted for at least ten seconds. No small feat with today’s short attention span youth!

I’ve had discussions at length with one of the stars of the piece, Daniel De Weldon, about the importance of nuance and expressing emotion with face, hands and body. This is method acting that is taught at prestigious institutions such as the famed Actor’s Studio in New York. Mr. De Weldon is a longtime member and an ardent proponent of the teachings of Konstantin Stanislavski, Uta Hagen and Lee Strasberg among others. The art of conveying emotion in a scene where dialogue either is sparse or simply insufficient. His character Daniel is a meth addict, using a surface wisecracker guise to hide the fact that he is a terrified young man suffering not only from the throes of the methamphetamine demon but severe Post Traumatic Stress Disorder as well. This on top of all the death he has seen while 10 years on the job makes for one wrecked bundle of man. De Weldon goes so far as to develop affectations such as a shoulder stoop, trembling hands, and a total lack of anything resembling lengthy eye contact with another person.

If he didn’t utter a word, one would still glean from the physical tics that he is the epitome of psychological damage. Likewise, I found Julie Streble’s lead heroine Sarah a prime example of a person, not unlike Daniel, battered by society and events and reduced to emotional rubble. In the end, however, an element in Sarah arises like a Phoenix from the ashes: self-worth and survival. Verbally, she claims it is for her son. I’ve a sneaking suspicion there is a base self-preservation flaring up in her gut that she refuses to consider as it may seem selfish in a bizarre way. In either case, her ferocity is raw and magnetic. The rest of the cast is quite solid, uniformly. Vincent Lee Alston is quietly charismatic as a man already a captive of the killer early on.

There’s an inner strength to him even as we see the terror and confusion on his face. I got a hint of a struggle to keep from mentally collapsing in front of his tormentor as a show of bravery and defiance. Andrew Yackel is a revelation as Sarah’s gay friend Alton, an ultimately tragic combination of scared kid and devoted protector of his friend. Francis Whitaker lends an odious, and slightly dense, air to the lecherous boss Brad. Barry Piacente is a portrait of cold, calculating, driven slayer here. Less of a psychopath and more of someone led fully by conviction and a twisted self-righteousness. He truly believes he is some depraved vessel for God’s judgment. This makes him ever creepier than your stock movie nutjob archetype, in my opinion. If I had to sum up the entire cast with just a single, blanket compliment it would be that each of the characters is fully fleshed out and much like ones you might run into on the street or at the office (one hopes we do not rub shoulders with people who have serial killer makeups, truthfully, but can never know I suppose! LOL). In a nod to the cult film universe that helped forge artists like Pantoja and his entire cast and crew, there’s a hilarious cameo by Troma guru/kingpin Lloyd Kaufman that fans won’t want to miss. 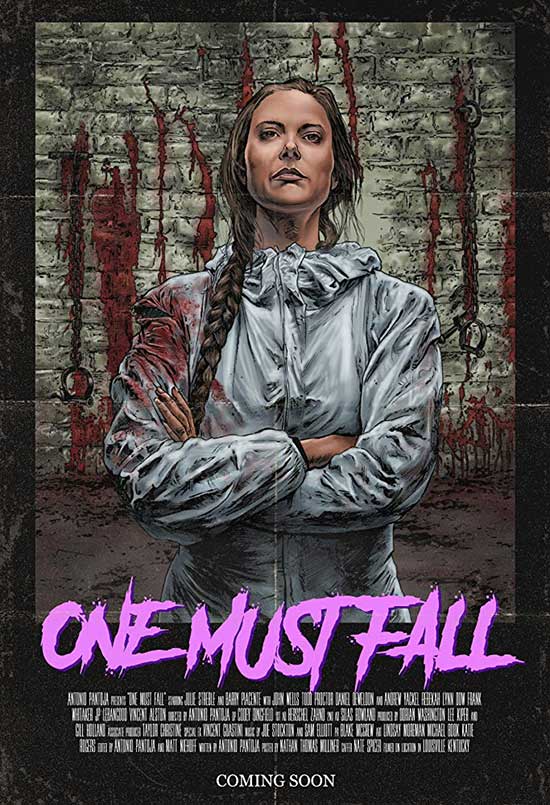 Like the proverbial little engine that could, One Must Fall is truly gaining traction and fandom on the festival circuit (proving that great taste still is the order of the day!). It has run, so far, in 11 festivals and have entered into 86 more fests thus far and counting. Oh, and along the way it’s snagged a quite tidy 43 awards (most recently winning for Best of Festival and Best Actor (Barry Piacente) at the Crimson Screen Festival in Charleston, South Carolina). These would be impressive attributes for some Hollywood mainstream projects. For an indie feature, it is on the level of purely amazing. Film distribution deals remain a work in progress as of this typing. However, I’ve no doubt that it will be forthcoming and Pantoja and company will have a veritable runaway hit on their hands. Although he might’ve bristled at the more overt gore, I fervently maintain that even the great maestro of suspense himself, Mr. Hitchcock, would beam with pride that young talents like Pantoja are keeping the torch of fully realized characters, isolation and nerves on edge over stock kills alive.