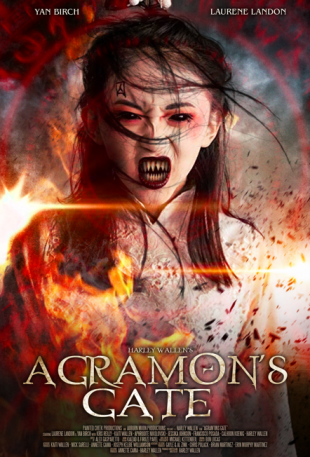 Check out the scary new poster for Agramon’s Gate. This much anticipated film is a riveting new horror feature film brought to you by Painted Creek Productions. It is written, produced and directed by multi award-winning filmmaker & actor Harley Wallen (Betrayed, Moving Parts, Bennett’s Song) and stars Laurene Landon (Maniac Cop 1 & 2, The Stuff, It’s Alive III: Island of the Alive) and Yan Birch (Wes Craven’s The People Underneath the Stairs, Death House).

This film is about a psychic reader and medium who is invited to a party. Some thing goes astray and something comes from the other side to haunt the party goers. They must solve the mystery before it’s too late. Agramon will not be easy to stop.

“I’m really excited to see how well received Agramon’s Gate has been on the film festival circuit so far, winning awards and being nominated at so many festivals. I felt we had a great script and story with really intriguing characters and such an amazing team to make it all come to life. We are currently in talks with our distributor about the game plan for the film, I’m excited to see how everyone seems to be about it. It’s also really cool to have Calhoun Koenig so shortly after guest starring on Law & Order SVU. It’s a great cover I think, it made me want to see it,” said Harley Wallen.