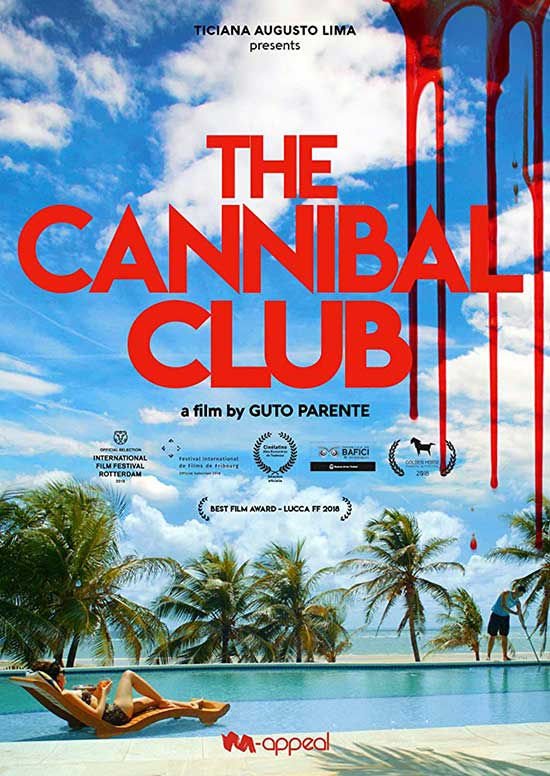 Otavio and Gilda are a very wealthy couple of the Brazilian elite who have the habit of eating their employees. Otavio owns a private security company and is a notable member of The Cannibal Club. When Gilda accidentally discovers a secret from Borges, a powerful congressman and the Club’s leader, her and her husband’s lives are in danger.

The Cannibal Club, or O Clube dos Canibais, is a Brazilian horror film that takes a look at the current state of Brazil’s social climate and class issues through a very bloody lens. Written and directed by Guto Parente (My Own Private Hell, Doce Amianto, The Monsters), this is an award-winning film – “Best Feature” at the 2018 Brooklyn Horror Film Festival as well as “Best Film” at the 2018 Lucca Film Festival in Tuscany, Italy – that first premiered in January, 2018, at the International Film Festival Rotterdam in the Netherlands, and now having run the film festival circuit will see an “official” American release in March, 2019. While this is a Brazilian movie dealing with specifically Brazilian topics, the themes are universal, not unique to that country, and so many audiences around the globe will no doubt relate to the subject matter at hand.

Otavio (Tavinho Teixeira; Sol Alegria, O No do Diabo) and Gilda (Ana Luiza Rios; The Last Breath) are a very wealthy couple living a life of luxury. They rub elbows with the nation’s elite, live on a large piece of land in a very nice mansion, have workers to take care of things around the house, and even have their own armed guards watching over their property thanks to Otavio’s security company. They have it made, and the opening scenes show as much: calm waves lap at the smooth sand of a private beach, while Gilda lounges in a bikini in the pool, enjoying peace and quiet while others work and sweat to ensure her serenity. As we soon learn, however, this calm is artificial, and underneath are secrets that could easily destroy not only reputations, but lives, and this façade of peacefulness quickly devolves into treachery, paranoia, and bloody chaos.

Secrets abound in Parente’s blood-soaked story, acting as the glue that holds everything together throughout the film. But once that glue is weakened, things take a turn for the worse. The luxury that Otavio and Gilda share is, in large part, thanks to the workers they employ to take care of their needs. The couple takes advantage of the large income gap between the rich and everyone else, bringing in people desperate for employment. These blue-collar folks are disposable in the eyes of the wealthy elite, and Otavio and Gilda treat them as such. This is the plight of the working class in Brazil, as it is in America and in most capitalist nations. The Cannibal Club displays this through extremes, starting with poolboy Josimar (Bruno Prata): he is enticed into steamy sex with Gloria, then murdered by Otavio mid-coitus with an ax to the head, and finally carved up into choice cuts and eaten by the rich couple. This appears to be the only way Otavio can reach sexual satisfaction, which is bad news for his wife. But fittingly, in public they put on the “happy normal couple” masks to hide their secret. 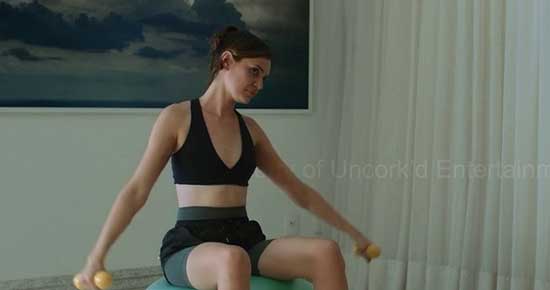 While Otavio and Gilda share this secret, they each have their own as well. Otavio belongs to a secret club that he hides even from his wife, which leads her to question his sexuality and intentions. The Cannibal Club, the namesake of the film, is comprised of the wealthiest men around who watch as a chained couple have sex and then are brutally slain and eaten. When one of the members tells the secret to someone outside of the circle, he is quickly and quietly done away with. Even more damning is the secret Gilda has: while at a party, she catches her security guard, Lucivaldo (Galba Nogueira; My Own Private Hell), and deeply religious, family values congressman Borges (Pedro Domingues; My Own Private Hell, O Shaolin do Sertao) together sexually. If this secret about the hypocritical congressman were to get out, it could cost him his job, which means he’ll no doubt go to great lengths to keep it quiet. This, of course, is where the real fun begins.

The Cannibal Club is unapologetically critical about the state of politics and class in Brazil, and it tells its tale in an action-packed, horrific way. There are great performances all around, from Teixeira and Rios as the greedy, perverted, flesh-hungry husband and wife, to Ze Maria as Jonas, the new worker hired on in the middle of the film. Cinematography by Lucas Barbi (O Prefeito) and editing by Luiz and Ricardo Pretti (The Monsters) help make this film look its absolute best: whether it be the raw, primal sex scenes or the bloody slaughter scenes, there are expertly-filmed artistic shots at both extremes. Along those same lines, the makeup by Guilherme Funari (first credited crew position) and special effects by Rodrigo Aragao (best known as director of horror films like Mud Zombies and Dark Sea) really put the carnage in the ultraviolence, allowing this cannibal film to shine in its brutality. 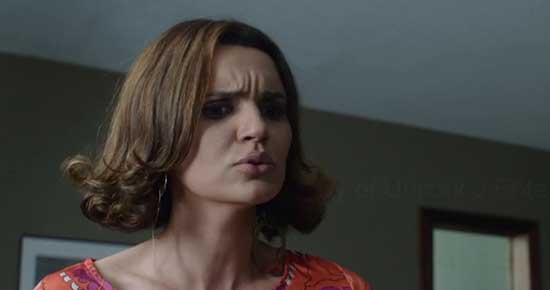 This is a film that takes the phrase “Eat the rich” and flips it around to skewer the wealthy ruling class and make a statement on the class warfare currently on display in much of the “civilized” world. Rather than taking a soapbox stance, writer/director Parente opts for the George Romero/Dawn of the Dead approach, working his commentary within a fascinating, bloody, gory horror movie. Some truly great horror films have been coming out of Brazil for some time now, and The Cannibal Club is right up there in the conversation. This is a must-see for any fans of Brazilian horror films, cannibal films, and class/social commentary as told through film.