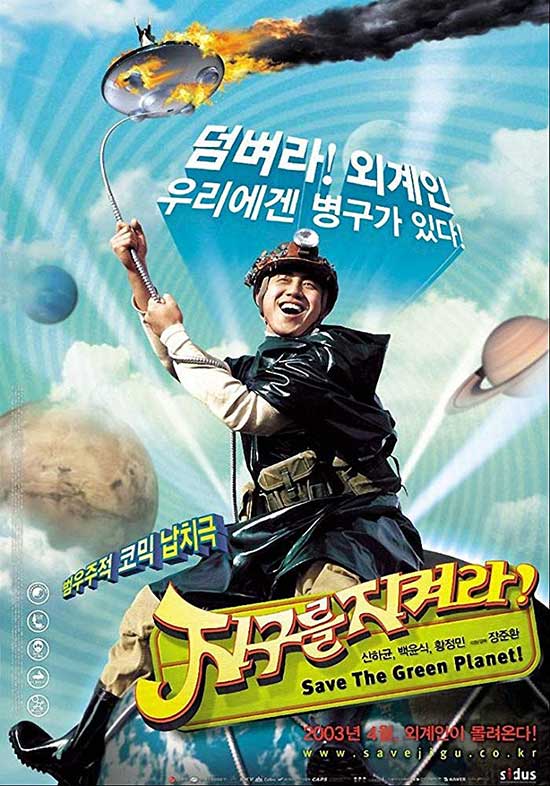 Byeong-gu believes that the world is on the verge of an alien invasion, and sets out to save the world

Save the Green Planet! Is a horror/thriller/sci-fi hybrid by the writer-director Joon-Hwan Jang.  While these three genres crossover each other in regular intervals with variable degrees of success, you would be hard pressed to find another film that matched the fantastic way Save the Green Planet! does it.

The basic premise is quite simple: Byeong-gu (Ha-kyun Shin), a young man with traumatic past, has become convinced that an alien race originating from galaxy of Andromeda have infiltrated earth in order to destroy it. Together with his circus performer girlfriend Su-ni (Jung-min Hwang), he plots a plan to kidnap Kang Man-shik (Yun-shik Baek), a top executive of a chemical company and expose him as the alien that he believes he is. 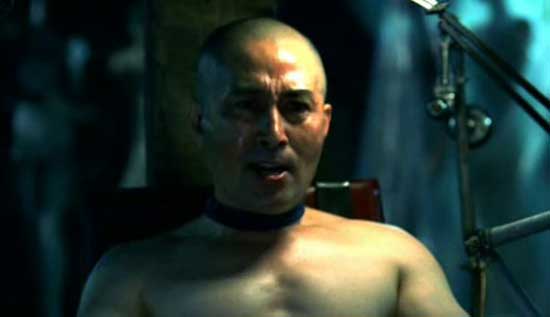 The start of the film very much sets you up to expect a dark comedy. The opening scene of the kidnapping is filled with little comedic moments, from Byeong-gu and Su-ni’s outfits modeled out of trash bags and topped with goofy helmets with whirling gadgets, to Byeong-gu’s rather acrobatic antics to subdue his victim. You really might very well be fooled into thinking that you are in for a light-hearted sci-fi comedy, but you would be dead wrong. While the rest of the film still has a certain comical side to it, the plot very quickly takes a much darker turn as our “heroes” take their victim into their specially designed basement torture chamber.

However, this is where the film really gets interesting. Throughout the various torture scenes and the police investigation closing in, the most intriguing part of the story is the possible existence of the aliens. Considering that Saved the Green Planet! is Joon-Hwan Jang’s first feature film, he has managed to do an amazing job in creating a story with real tangible suspense and mystery. Much of this is thanks to Ha-kyun Shin’s fantastic role as the deranged Byeong-gu. 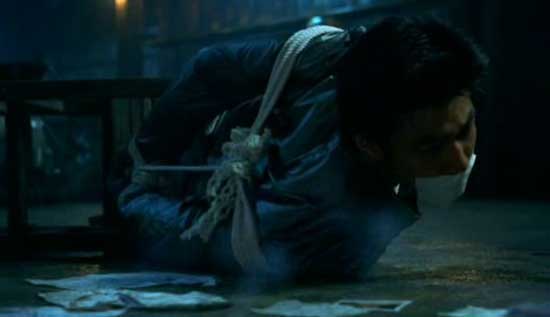 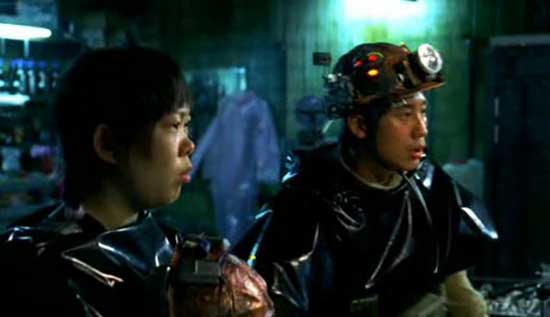 He has brought the character alive in such a way that makes him simultaneously loathsome and sympathetic, so while you might feel some empathy for this poor, misguided spirit, you will also kind of want to see him get caught. On one hand this weird guy in a tin foil hat could just be an unfortunate victim of horrific circumstances, who rather than dealing with the trauma life has dealt him, has chosen to fixate on a story of alien invasion and uses it as an excuse to take revenge on those who wronged him. On the other hand, the possibility of actual aliens amongst us seems almost as plausible as a demented serial killer. The real brilliance, of course, is that you just can’t know for sure. Not until the very end. 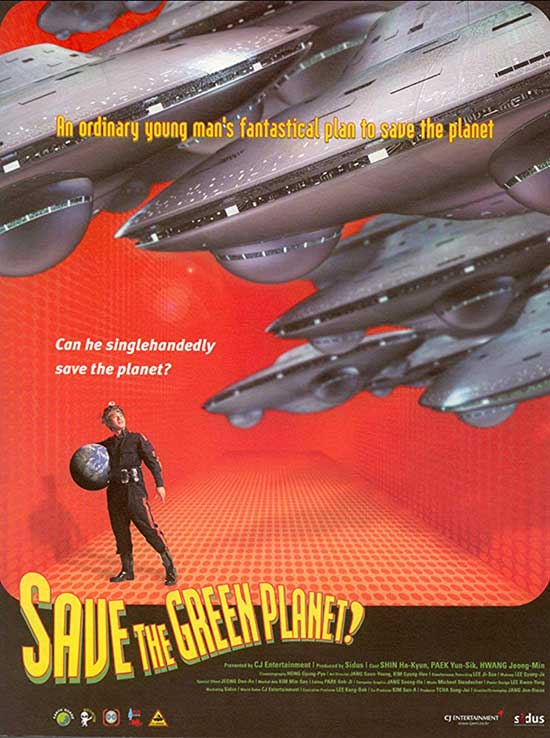 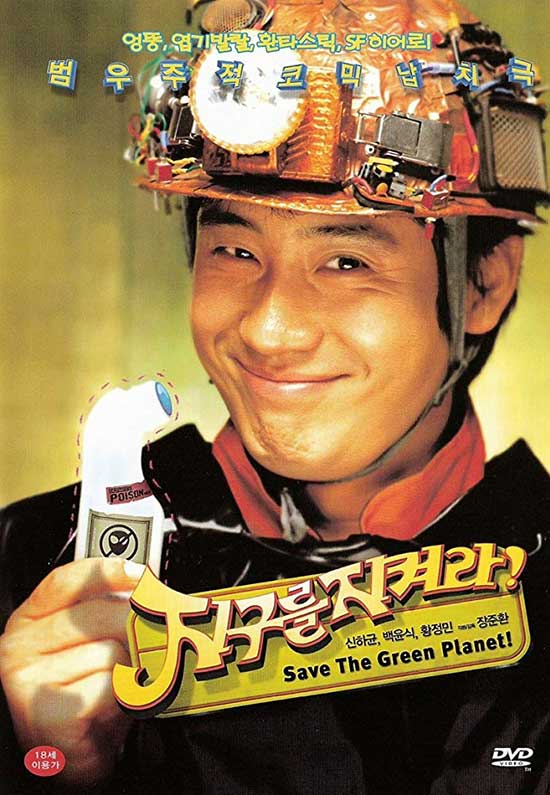 Besides the great acting talents, Save the Green Planet! has surprisingly high production values. For some reason I was waiting for something much cheaper looking, but the special effects and set designs are all executed to a very high standard. There are few scenes where the CGI lets the rest of the film down somewhat, but these scenes are few and far between. When the film gets violent, it really gets violent and the brutality of some of the gorier scenes really took me by surprise. The make-up effects on these scenes are expertly done and a true joy to watch. 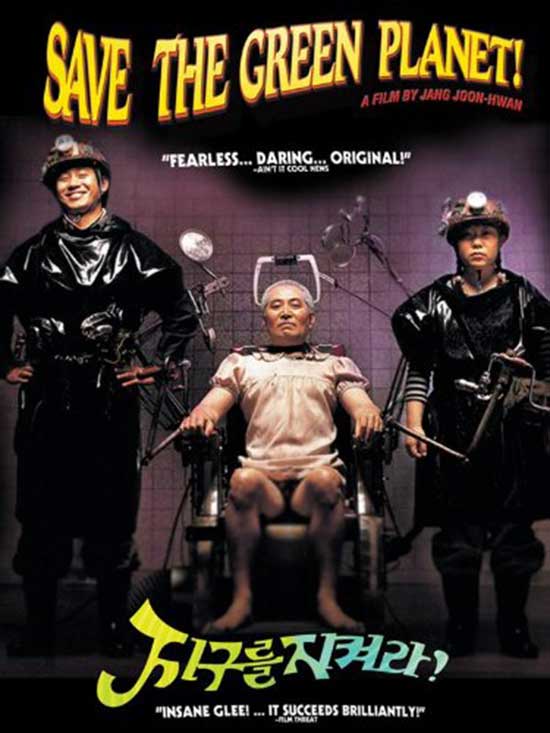 Save The Green Planet! is not a perfect film. With its rather schizophrenic way of mixing different genres, it does suffer from slight unevenness as the plot jumps about between them. The first half also drags on somewhat and for a while the film feels quite aimless. Luckily this gets corrected once the plot gets going again and a more definite direction takes shape. All that being said, I would most definitely recommend Save the Green Planet to any fans of Korean cinema. It’s a weirdly wonderful mixture of a myriad of genres, and should have something to please most viewers.