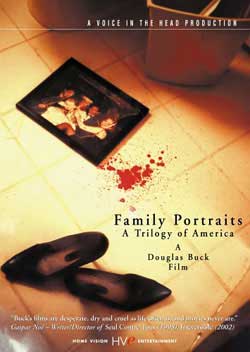 Deceit, long kept secrets, and grisly murders surrounded in mystery – all this and more can be found in Bloodbath in the House of Knives. What starts as a harmless visit to a hypnosis demonstration turns into a roller coaster ride filled with dead bodies that start to pile up around poor Ivy (Anne Reiss). What can be the true meaning of all this? Who would be capable of such crimes? Could it have anything to do with Ivy’s past relationship with sleazy p*rnographer and drug dealer Nick Lemenza (Damien Colletti) and the secret he’s been holding over her head? Maybe it has something to do with her sister Violet (Monica Moehring), and what really is their current relationship? What about the Hypnotist (John Link) who started this whole mess? Does he have something to do with it? What does her lawyer, Mr. Delgardo (Lloyd Kaufman) make of it all? Or will he soon end up in a body bag like so many others have? Join Ivy and her ever dwindling group of friends and family members as she realizes she is on a terrible journey that won’t end! Or, will it finally end but with her very own life? You’ll have to watch this action packed murder mystery chilling horror film thriller to find out!

Your mom listens to Machetazo! And Machete banged her too! Damn, I can’t wait for that movie to come out! But until that day comes I will divert your attention from the excruciating wait with a review of a little film called FAMILY PORTRAITS: A Trilogy Of Amercia.I don’t know what made me click on the review of this movie. It didn’t sound like a horror movie and even though the cover of the dvd did have some blood on it it doesn’t really tell you much at all of what the movie might be about. But I read the reviews and each one described it as a riveting cinematic viewing experience. Bleak, shocking, upsetting, and bloody. And the more reviews I read the more intrigued I was but at the same time I was thinking, ” Can it really be that shocking? ” I mean, I’ve seen alot of the horror and exploitation movies that most of us have seen. HENRY: Portrait Of A Serial Killer, ICHI THE KILLER, the original LAST HOUSE ON THE LEFT, NEKROMANTIK, AFTERMATH: Genesis, CANNIBAL HOLOCAUST, CANNIBAL FEROX and most others and I know your about to pounce on me and name one of your faves but I just want to get the point across that I have seen alot gore and disturbing stuff onscreen so while my curiosity was piqued I still felt like a jaded hardcore horror fan that has seen it all.

So I put FAMILY PORTRAITS: A Trilogy Of America aside in my mental rolodex of horror movies to check out at a later date. There are other movies that are much more higher profile on my movie radar screen; flashier and more outlandish stuff like SAMURIA PRINCESS, SUKIYAKI WESTERN DJANGO, MARTYRS, INSIDE, and so many others that I figured someday I will get around to FAMILY PORTRAITS. Months, and months, and months, and months passed by and I found out my local Hollywood Video was closing down and they were having a sale so I went down to pick up some movies and lo and behold I found FAMILY PORTRAITS! It wasn’t till a few weeks later that I finally watched. It was on my 1 day off and I was badly hung over and I was laying on my couch in a half coma like state and figured it was a good time to watch it.

I read the liner notes before I popped it in my player and I found out that the director did not intend for it to be a anthology piece. He made each short years apart but slowly realized what his films were dealing with and it turned in to what it is. All three short films deal with the extreme situations that occur within families and the violence that can and does erupt. You read about it in the papers and see it on the news about a family that dies horribly in an explosion of violence most often perpetrated by the father where they kill the family and usually do themselves in as well. I know that this is kind of a bad thing to say but when there is a report about this on the news we only get to see the aftermath of what happened, we never get to see the crime actually go down. Sometimes we do if someone has a camera handy but that is very rare. Well, in the first short film of FAMILY PORTRAITS we get to see the blood, violence, and death! 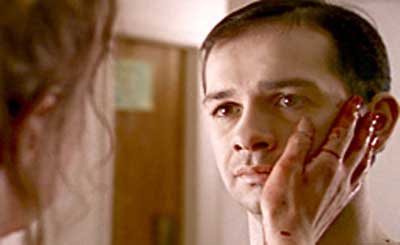 The first short is called CUTTING MOMENTS and is the bloodiest and nastiest of the three short films. It all starts with the mundane act of a man cutting his bushes with a pair of hedgeclippers. His wife stares at him through a window as the son plays with his toys on the front lawn. The father goes to his son and talks to him and right away you see that something is wrong within the family. And I read about this in other reviews, about the sense of uneasiness and palpable despair permeating between the family members and it comes off the screen and I felt it. It’s definitely there between the husband and wife as they talk to each other in measured tones and they don’t even look at each other when they do talk.

Director Douglas Buck made a really strong short first film debut. I know he has a small budget and limited tools to work with but the look and feel really works and he got really good performances out of his actors. I don’t want to say I was lucky to see the horrific, bloody and downright morbidly depressing ending but I am glad I did. I can’t tell you what happens but if you are a gore fan you really need to see it and all I will say is that Tom Savini helped a bit with the efx and that it really lives up to the name of CUTTING MOMENTS! I showed it to my uncle and his comment was ” I aint never seen no sh*t like that before! ” Rest assured the ending is bloody and disgusting and you sick bastard gore hounds will love it! And I count myself among those bastards.

And I totally stand behind the statement that I believe this first short, CUTTING MOMENTS, is worth the price of a feature length dvd for us hardcore horror fans but as a whole FAMILY PORTRAITS: A Trilogy Of America truly transcends the genre and dips into a level of drama and esoteric film making that few movies reach. And where ever that place is, and what ever movies you think they may be be it THE EXORCIST, THE SHINING, A CLOCKWORK ORANGE, TEXAS CHAINSAW MASSACRE, HALLOWEEN, FAMILY PORTRAITS goes there. 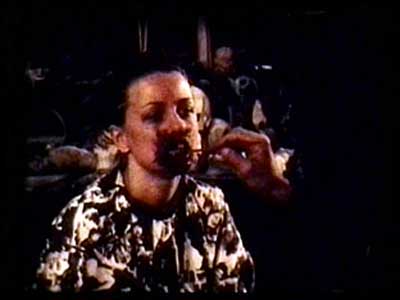 The other 2 short films are not as viscerally gut wrenching as Cutting Moments but on a technical and storytelling level they are superior and almost as compelling. The 2nd short called HOME, again deals with a small family in the midst of a deep and troubling turmoil coming pretty much from the father and his childhood problems and ends in a horrible manner that we se every few weeks it seems on the nightly news. It is no where near as graphic as Cutting Moments but still very bloody and has a powerfully sad and destitute ending and you can see how Douglas Buck was becoming a better film maker.

The last short, titled PROLOGUE, is almost a hour long and is the most professional looking of the three and even has some Hollywood actors. PROLOGUE deals with the aftermath and after effects of a violent event and how everyone involved deals with it. And unlike Cutting Moments and HOME it has a kind of forgiveness and sentimentality or as close to those emotions that someone can get to when something this horrible happens to someone. It’s about a young girl coming home after a lengthy stay in a hospital. She is in a wheelchair and has these metal claw like appendages in place of her hands and after seeing her you really want to know how this happened to her but we don’t find out until almost at the end of the film and you find out through a news report and it is somewhat chilling just hearing about it and when I saw it with my uncle he said he remembers a news story almost exactly like it a few years ago.

Eventually the girl confronts the person who did it to her and she does forgive him a little but I do not think he deserved forgiveness after you realize what else he has done even though he is a somewhat sympathetic and definitely a lost and pathetic character. PROLOGUE has no onscreen violence or gore but it does have a blanketing sense of despair, loss, anger, helplessness, but also a glimmer of hope that the other 2 shorts do not have. So overall FAMILY PORTRAITS is pretty damn depressing and ugly but is a really strong entry into the horror genre and is definitely a must see for fans. I got the dvd and it has a good amount of extras that delve into the movie and even Peter Straub and film maker Larry Fessenden, the guy who made WENDIGO are fans and Larry Fessenden even comes out in one of the shorts Again I am glad I picked this one up and I hope this review sways you in the direction of getting it as well. Lastly I suggest watching PROLOGUE, first, then HOME, and save Cutting Moments for the end. Yes it is that good.