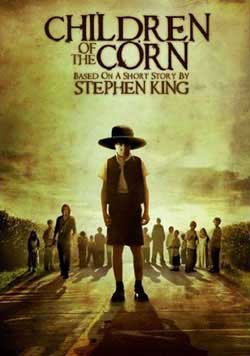 In an effort to bring their marriage back from the dead, Burt (David Anders) and Vicki (Kandyse McClure) take a second honeymoon, but their road trip takes an unexpected detour when they get stuck in an empty farm town, where the tall rows of corn hide a horrifying secret. The Sci Fi Channel’s remake of Stephen King’s scary tale also stars Preston Bailey as child preacher Isaac and Daniel Newman as his brash sidekick, Malachai.

In tradition of horror movie remakes, Children of the Corn did not escape this trend releasing a made for TV version in September 2009. Donald B. Porcher’s version has ties that link the traditional Stephen King short story, but strays away slightly from both the short story and original film released in 1984. The names are still intact, but the rest of the story is a bit skewed.

The movie begins with a young boy dressed in Amish-style regalia giving a sermon to a congregation of children. The preacher, Isaac(Preston Bailey), is a powerful speaker that all the kids look up to for guidance. His sidekick, Malachai(Daniel Newman, stands close by being an elder in a society that over eighteen year olds must be eliminated.

The plot turns to our two main protagonists, Burt(David Anders) and Vicki(Kandyse McClure). Burt is driving an old style car, and both are arguing, as they do almost fifty percent of the movie. Burt is a army veteran, and lets Vicki hassle him about every little thing as they are driving down a country road in Nebraska. Their attempt of a second honeymoon is intercepted with uncontrollable bickering, and a feeling of not knowing where they are going in the Nebraskan farmland. They come upon the town of Gatlin, where all that is seen in cornfields for miles. Amongst arguing, Burt accidentally strikes a young kid that dashed in front of him. Sticking to the original, Burt goes into the cornfield to figure where he came from, and comes upon the little boy’s suitcase. While Burt is searching, Vicki is sought out by Malachi, which is reported to the rest of the child congregation.

Burt comes back to the car with the luggage, and hands it to Vicki, in which she is still in an argumentative state. Her gripping puts Burt into a bossy state, just wanting her to quiet down and figure out what to do with the kid’s corpse they just mutilated. When coming upon Gatlin, they see a deserted town with not much help. They come upon the kid congregation’s church, and Burt decides to go in and investigate. When Vicki pleads to go in, Burt declines her wishes, and goes alone. Vicki is surrounded by the children, and when Burt returns, he sees his car shoot up in a fiery blaze.

Instead of being happy that the woman that would not get off his case was dead, Burt is set on the fact that the children have taken Vicki hostage, and goes on a searching spree deep within the corn to find his wife. Long chase scenes, accompanied by a shot of the way the children have rituals of adding to their race of youth, gives way to an ending that proves unhappy for both main protagonists.

The back story of where all the adults went is not introduced in this version, as the original gives a glimpse of with a young boy’s flashback of a Sunday morning massacre of adults. Another thing that bothered me was the new portrayal of Isaac by Preston Bailey vs. the old version’s portrayal of Isaac by John Franklin. While watching the original children of the corn, the eeriness of Franklin’s voice gave me a lasting impression of the creepiness of the film that did not shine thru in the remake.

Porcher’s Children of the Corn provides a new telling of the old nightmarish tale of what if children took over society. Explosions and bloodshed give the film its rightful place in the horror genre. Even though Porcher’s version is significantly different from the original ventures of telling the story of Children of the Corn, the initial plot is still there of children taking over society and eliminating any “Outlanders.”