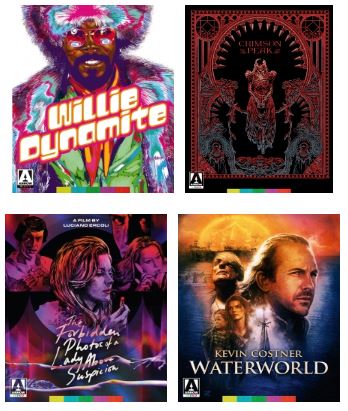 Ring in 2019 with a brand new batch of Arrow releases! The festivities begin on January 8th with the release of the blaxploitation classic, Willie Dynamite. While Willie doesn’t have the popularity of your Shafts and Sweetbacks, he certainly has every bit as much swag and star Roscoe Orman delivers a truly dynamite performance. This release features Kiss My Baad Asss, a guide to blaxploitation hosted by the legendary OG, Ice-T.

Also hitting shelves on the 15th of January is The Forbidden Photos Of A Lady Above Suspicion, from acclaimed Italian director Luciano Ercoli. This twisty and winding tale takes viewers through a triangle of friendship, sex and murder. Featuring a brand-new 2K restoration from the original camera negative, Italian & English audio tracks and plenty of special features to keep you busy once the film ends, this is is a must-own for Italian horror fans everywhere.

The month of releases comes to a close on January 22nd with Kevin Costner’s infamous Waterworld. This dystopian tale about Earth being completely submerged in water was notorious for being the most expensive film ever made at the time of its release and wasn’t well received by critics. Time has been much kinder to the film, having since developed a cult following as an action spectacle that isn’t to be missed. This new release features a 4K restoration and three cuts of the film, including the extended US TV cut that runs 40 minutes longer than the theatrical release.