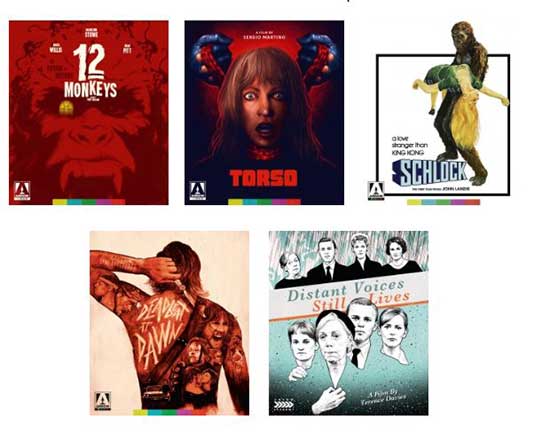 DISTANT VOICES, STILL LIVES (10/23) [Blu-ray]
via MVD Entertainment Group
This October Arrow is All Treats, No Tricks!
We have officially entered fall which means it’s finally time to get those Halloween decorations up to the scare the neighbors and enjoy pumpkin spice variations of your favorite treats. More importantly, it’s that time of year when you gather ’round the television with your closest friends and watch the spookiest of movies. This Halloween you’re going to want to invite over your good friends Arrow.
For those looking to stay in the horror realm without watching only horror, then perhaps it’s best you start with Schlock from John Landis and hitting Blu-ray on October 16th. This raucous comedy pays loving tribute to monster movies of the past as it follows a prehistoric ape named Shlock on a rampage throughout southern California. This genre mashup launched the career of Landis and makeup effects wizard Rick Baker and now it will finally have a proper home video release. The new Blu-ray comes with a brand-new 4K restoration and monster-sized list of special features that includes an audio commentary with both Landis and Baker.
If you like your horror gory and raw, then Arrow Video has just what you need. Releasing October 23rd is Jim Van Bebber’s blood-soaked cult classic, Deadbeat at Dawn. This is the story of Goose, a gang leader trying to go straight until his girlfriend is brutally murdered by his rivals. Now pulled back into the world he was desperately trying to escape, Goose is hell-bent on getting retribution. This 80’s gem comes with a new 2K restoration and is decked out with plenty of bonus content featuring Van Bebber discussing his outrageous career.
Looking for some Italian horror? Then you’ll want to be at your local video store on October 30th to snag a copy of Sergio Martio’s masterpiece, Torso. This heart pounding giallo about a sex craved maniac prowling the streets of Perugia looking for his latest victim is a personal favorite of Quentin Tarantino’s and with good reason. With copious amounts of violence and a vicious game of cat and mouse, Torso is sure to meet your Halloween needs. This new Blu-ray features a brand-new 2K restoration of both the 94-minute Italian cut and the 90-minute English cut.
Also hitting shelves on October 30th will be Terry Gilliam’s 90’s sci-fi classic, Twelve Monkeys. Based off a short film by Chris Marker, Twelve Monkeys opens up in 1996 with a group known as the Army of Twelve Monkeys releasing a deadly virus upon the world. Flash forward to year 2035 where Bruce Willis is ordered to travel back in time to find a cure. Nominated for two Oscars, Twelve Monkeys received rave reviews with Roger Ebert calling it a “celebration of madness and doom.” This new Blu-ray features a brand-new 4K restoration approved by Gilliam.
What’s that? You want to mix up your October viewing and have a bit of a reprieve from horror? Well, then you’re going to want to grab Arrow Academy’s Blu-ray release of Distant Voices, Still Lives on October 23rd. This critically-acclaimed debut from Terence Davies allows viewers to peer into the life of a working-class family in 1940’s and 1950’s Liverpool. This brand-new 4K restoration was carried out by the British Film Institute.
Share