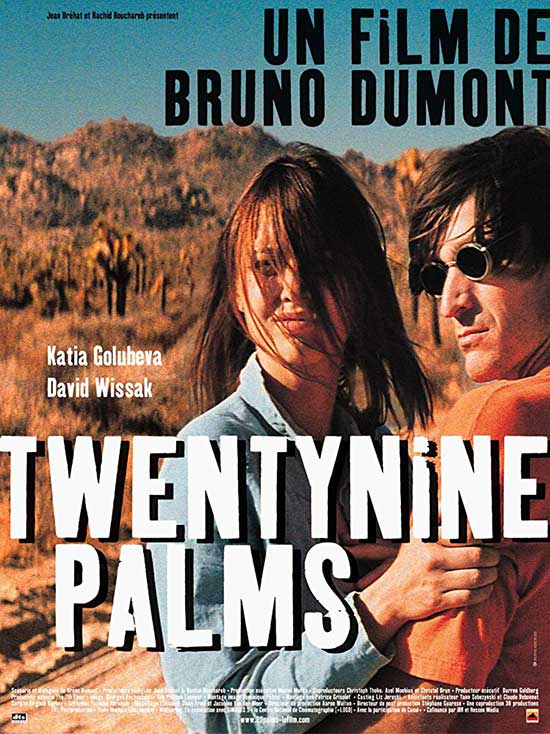 David, an independent photographer, and Katia, an unemployed woman, leave Los Angeles, en route to the southern California desert, where they search a natural set to use as a backdrop for a magazine photo shoot. They find a motel in the town of Twentynine Palms and spend their days in their sport-utility vehicle, discovering the Joshua Tree Desert, and losing themselves on nameless roads and trails. Frantically making love all the time and almost everywhere, they regularly fight, then kiss and make up, with little else going on in their empty relationship and quite ordinary daily life–until something horrible and hideous brutally puts an end to their trip.

Bruno Dumont’s third film, 2003’s Twentynine Palms, is an absolutely fascinating film that deserves to be studied and dissected from a number of different angles, from a technical aspect to an historical one, psychologically and sociologically, and even pertaining to the dynamic between genders and the way other countries view America. This film is often seen as the veritable “patient zero” when it comes to the discussion of the New French Extremity (see the chapter on this film and Ozon’s Criminal Lovers in Alexandra West’s book, Films of the New French Extremity). Some say it takes a gratuitous approach that shocks viewers just for the sake of shocking them, while others praise the simple, seemingly redundant and monotonous story as appropriately lulling of the audience, kind of the quiet before the absolute hellstorm of an ending. Either way, it is a film that sticks with you long after it’s over, and one that gets people talking.

Set not in France, but in the middle of a vast desert-area of California, Twentynine Palms follows two characters: David (David Wissak; Surviving Paradise, Willoughby), a photographer on the lookout for a good location, and his girlfriend Katia (the late Yekaterina Golubeva; Pola X, I Can’t Sleep). For much of the movie, the couple goes out and explores parts of the nearby area, argues about something innocuous, and then has often rough, often public sex. Rinse and repeat. Perhaps they have communication issues. Maybe they’re just not meant for each other. But their arguments often border on the ridiculous and inane: he snaps at her when she asks what he’s thinking about; he gets upset when she asks a waitress what someone else is eating; she gets mad when he glances at a woman walking past him; and on and on. None of these issues are ever worked out – it becomes more of a “We don’t talk much, but the sex is great!” scenario – but an argument could no doubt be made that either of them have some psychological issues that need help. 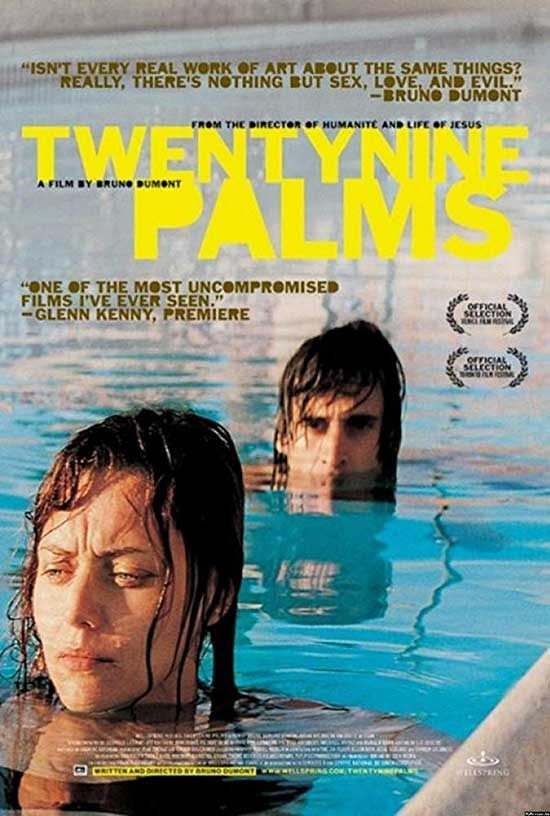 What’s interesting about this film is the utter paranoia it induces as compared to what it actually shows on screen. We have a man and a woman wandering through unknown (to them) territory, strangers in a strange land. Often times we have very long shots showing the couple as very small figures against a vast, sprawling background of sand and rock and mountain landscapes. Sometimes the shot remains on them for extended periods of time, and all we can think about is who or what is about to attack. Of course that’s what comes to mind, because horror films have shown us again and again that in this scenario, that is exactly what happens. This is Dumont’s Twentynine Palms, but there are a number of scenes where it might as well be Craven’s The Hills Have Eyes or Mason’s Blood River. But after the second or third time when Katia and David wander the wide-open deserts and still nothing happens, aside from some sun-drenched sex, we, the audience, finally relax a bit, realizing that maybe we’re assuming too much. And *spoiler alert* that’s when it hits us, right when we’ve let our guard down. If the first 98 minutes of the film toy with our emotions, the last 15 demolish them. 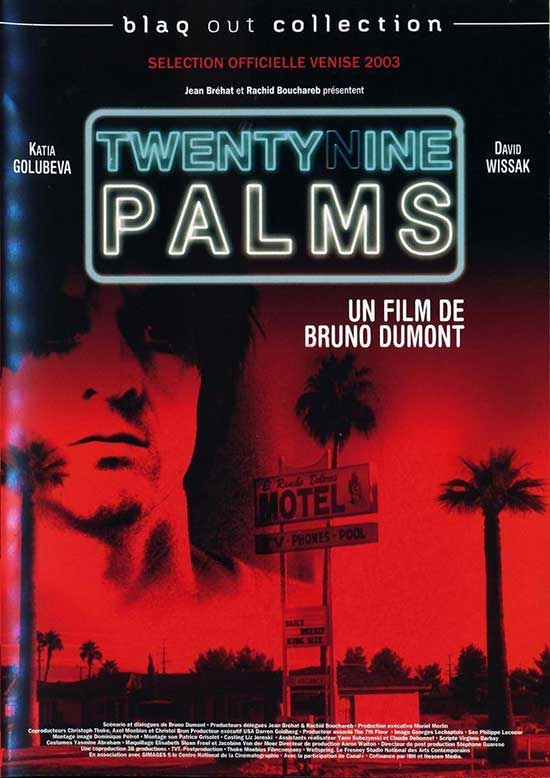 We know from a variety of sources that part of Twentynine Palms is based in writer/director Dumont’s (2018’s recipient of the Locarno Film Festival’s Pardo d’onore Manor lifetime achievement award; see also L’humanite, Flanders, and Hors Satan) impression of America. This would explain its casual resemblance to the classic American film, Deliverance (RIP Burt Reynolds), both of which find a small group of people exploring nature and ending in finding trouble. Twentynine Palms seems to take it one step further, presenting David as an insecure character who needs to prove his manhood in typical macho “American” ways.

He drives a Hummer, a rugged all-terrain vehicle, but throws a fit when he lets Katia drive and she accidentally scrapes against some brush. It’s as if he is attempting to follow through on his own personal manifest destiny – he wants it all, to the point where early in the film, when Katia goes off to pee, he says he wishes he could watch her. He needs it all, especially those things he’s told he can’t have, and he needs to conquer it all. Every new place they stop, he insists on having sex, often rugged sex where he is able to assert his dominance: the side of a hill, the motel room, the outdoor pool. He is always right, she is always wrong – even when he is driving and hits something, he blames her. And ultimately, in the end, when he feels his masculinity and his pride stripped away, through no fault of Katia’s, he still takes it out on her.

Twentynine Palms is, in Dumont’s words, about the “horror of banality.” It is a wonderfully shot film, capturing the beauty of the desert alongside the terror that often lies just under the picturesque surface. At just under two hours long, much of it devoted to establishing the two main characters (almost the only real characters, with a couple minor exceptions) and their bland routines, the horror fan looking for blood and gore and slaughter may find themselves losing interest after a little while. There is a payoff, a shocking, disturbing, bloody, sadistic payoff, but it requires a bit of patience to get there. Highly recommended to all audiences, horror or other, that don’t mind investing a bit of time to experience something truly unique.