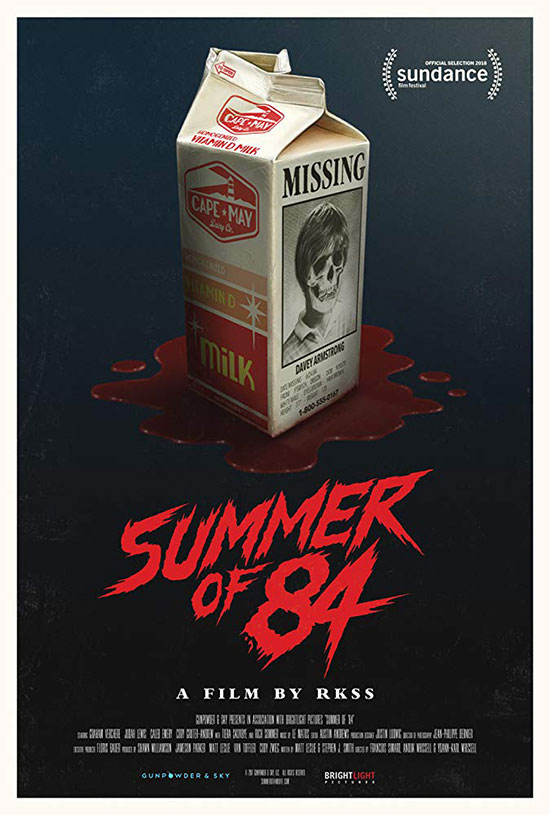 SUMMER OF 84 stars Graham Verchere (“Psych,” “Once Upon a Time”), Judah Lewis (The Babysitter, Demolition), Caleb Emery (Goosebumps, “Dear White People”), Cory Grüter-Andrew (“Fargo,” “The 100″), Tiera Skovbye (“Riverdale,” “Once Upon a Time”), and Rich Sommer (“GLOW,” “Mad Men”).  The film is directed by the Montreal filmmaking collective RKSS (Turbo Kid) which consists of François Simard and brother & sister Anouk Whissell and Yoann-Karl Whissell, from a script by Matt Leslie and Stephen J. Smith.

Summer, 1984: The perfect time to be 15 years old and care free. But when neighborhood conspiracy theorist Davey Armstrong begins to suspect his police officer neighbor might be the serial killer all over the local news, he and his three best friends begin an investigation that soon turns dangerous.”

This film starts off good. It has a different vibe to it. It sort of feels like a mixture between something Stephen King would write and this secret scary world that we have been watching for years with serial killer inspired films. There is a hint of “Stand By Me” with the feeling of the teens and the friendships they maintain. 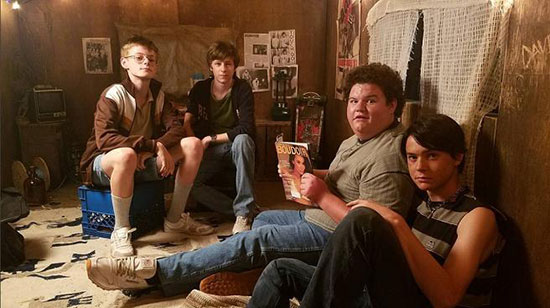 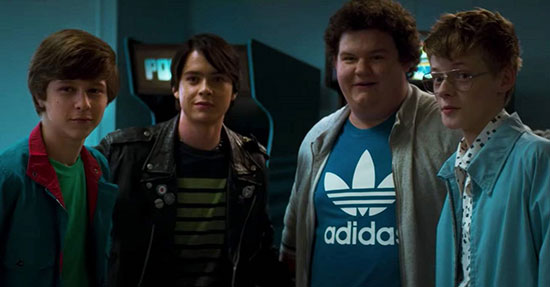 “Disturbia” is also sort of hinted at with the creepy neighbor who you never quite know what they are doing for hours in the garage? (What are they doing?) It starts off with Davey Armstrong (Graham Verchere) who delivers an excellent speech about his crazy suburban neighborhood. We meet Wayne Mackey (Rich Sommer) who plays one of the neighbors. You get creepy vibes from him right away but we shall see.

Davey is going full speed ahead with his paper route while delivering the real deal facts about his neighborhood. He pedals and pedals and boom…. Creepy neighbor Wayne. It is 1984 when serial killers had been thrown into the spotlight and there was no escaping Dahmer, (Ipswich, Oregon of all places) Bundy, John Wayne Gacy and more. It is a creepy fact when you move into a neighborhood. This film throws all sorts of questions out there. Do you really know your neighbor? Are the suburbs the safest? Why do people assume this?

This film answers a lot of these questions. Of course the creepy neighbor wants Davey to help him. (Don’t go in houses people.) This seems similar to what John Wayne Gacy would do. Luring people into his home and well there is a basement involved.

A locked room in the basement and “storage.” That is what all potential serial killers say. Davey seems like a smart kid so hopefully he makes it out alive. The neighbor chat turns weird and Davey quickly gets out of the house. 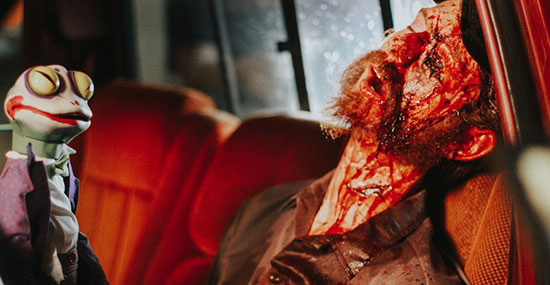 We also meet Nikki Kaszuba (Tiera Skovbye), Sheila Armstrong (Shauna Johannesen.) The kids seem to be on a mission. The funny retorts and mischief they get into makes the movie funny. The kids seem to be the ones who believe the strange events happening. The grown-ups calling it conspiracy theories and more. Davey’s walls are covered in articles about murder, serial killers…. Wait, is this “Supernatural?” Sam and Dean Winchester seem to have an influence here.

The kids have walkie-talkies and they are talking back and forth. The film is slightly slow-paced but the story and how it is going makes sense. There are slight homages and the great old school 80’s music we all know and love. “Cruel Summer” plays.

There is also the cool babysitter, Nikki. Doesn’t every great 80’s film have one? The film is shot well and you can sense the vibes and how they have everything set up for the eighties. Even divorce is discussed and seems taboo. Davey seems to have turned into DEXTER and feels he knew was right all along. They describe the serial killer in typical fashion.

The kids…. Think it is the “coolest thing that has ever happened.” But, some of his friends do not agree. “The Cape May Slayer.”  We have learned over the years with films like, “The Burbs” and “Donnie Darko”, “The Stepford Wives” that all may not be what it seems as life in suburbia is what some people dream of. It is also the perfect hiding ground for the serial killer, murdering, pod people types. 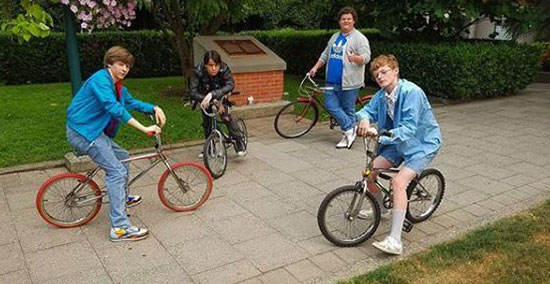 The slow building relationships and the eerie lights give “Halloween” vibes. Although, there is no comparison to Halloween. They certainly pay tribute and you can see it visually. Even, a slight nod to “A Nightmare on Elm Street.” No one ever wants to be chased down a dark alley.

The visuals in the film brings back memories and it shows that kids can be kids but also get in trouble in the strangest ways. There is mystery, horror, terror, suspense and the fact you cannot go to a store and buy a pick-ax without being public enemy number one may hurt a serial killers feelings.

The kids begin to follow some leads and you begin to realize that there is a Laurie Strode, an Annie and a Lynda in some form of these kids. (Even The Frog brothers portrayed “The Lost Boys” by Corey Feldman and Jamison Newlander.) You feel the homages to these films and the actors do a good job of conveying what needs to be done.

Bring on the storage units and Ted Bundy’s car. This movie may feel a little slow paced but you need the pace to collect all the thoughts. This film keep you on edge. The Atari posters, the milk cartons with the missing person on it. There is nostalgia in many ways. The fact that the kids didn’t have smart phones and they have depend on instincts, books and each other is important.

The kids get to confront whom they are accusing, thanks to the father. “It is hard to pass up an adventure.” The film takes a slight turn and it is always someone telling someone they have “quite the imagination.” They discover secrets. It just seems people move in slow-motion when they should be moving at warp speed sometimes. The jump scares are intense. They are not regular jump scares. They are scares that scare the shit out of you because it is something that unfortunately could happen.

This film was good. The fact that the suburbs seem to have this allure to people is fascinating. Serial killers, strange people and more lurk in the shadows. The truth is no matter where you are that is a possibility. Make sure to see this film and relive the eighties and all its glory. The ending will leave you shocked and feeling as if you will need to check the entire house and triple lock the doors. Stay scared folks and living in horror.