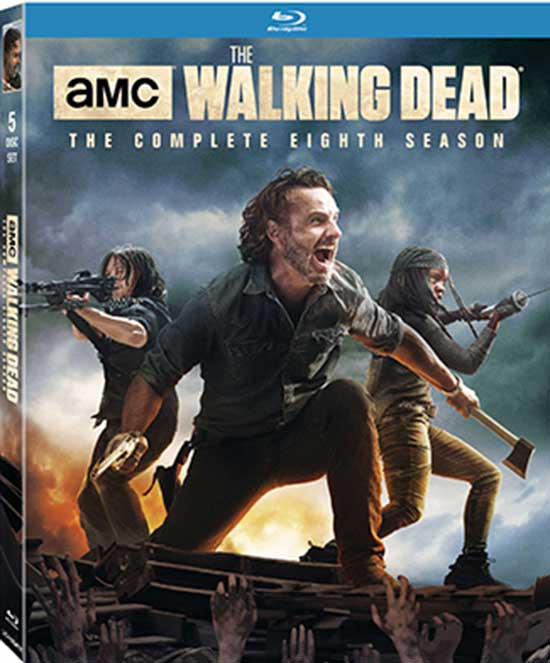 Ok WD fans, you’ve made it this far with so much more to go! Season 8 launched October 22, 2017 concluding on April 15 of 2018. The series is a much heralded fan favorite TV show often receiving the praise of countless fans and celebrities (also supported by an exclusive talk show “The Talking Dead”, that appears following every episode on a weekly basis) The TV series is a product of the AMC network of which has spawned SO much interest that it created a sister show called “Fear the Walking Dead” (a show that covers an earlier timeline and location). 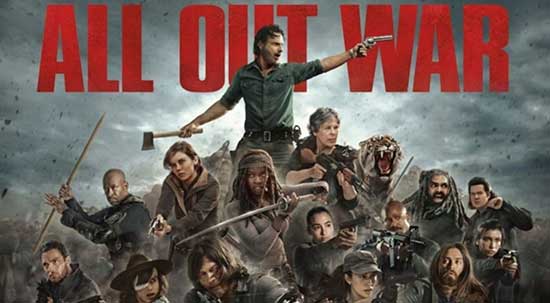 The Walking Dead Season 8 spans 16 episodes that has already won numerous awards for best horror TV series. Season 8, is in fact an important one that continues the saga left off in season 7 that left on a note of Rick and his team now empowered to wage war again the scourge of Negan and company. Fans will remember that Negan viscously bashed in the heads of 2 important members from their group (just to make a point about his need for control and power). Rick at the time, standing down and accepting momentary defeat to the new order of things has found new inspiration to rise forward and conquer.

Season 8 again focus’s on the conflicts that have arisen between Rick’s group and our new favorite villain Negan (Jeffrey Dean Morgan). More specifically the season focuses on the entire renegade group under Negan’s lead who call themselves the Saviors (sort of a play on the idea (and disillusioning notion) that despite saving people they really have done more haRm than good) 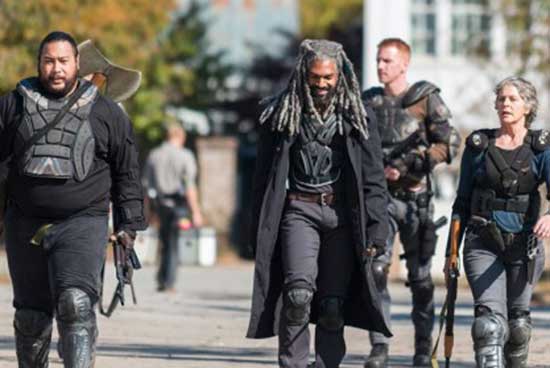 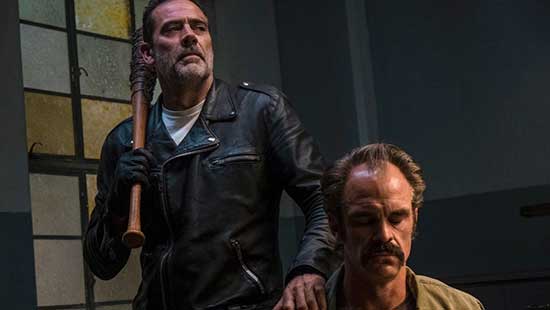 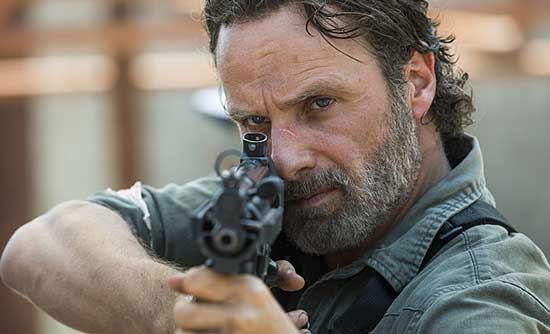 While you might make this statement about “any” season of “The Walking Dead”, season 8 comes chock full of surprises, misdirection, character deaths, carnage-worthy scenes, back-stabbing-turn-arounds, plot changes, and of course a whole lot of zombie (dare I say the word!) executions and attacks. It is well known that the series of WD is one that puts its focus on the evils of man and its struggles, however make no mistaking that lying in the backdrop of it all is still plenty of head-ripping, gut-wrenching, flesh gnawing action moments seeping its way into the elaborate story line concocted here.

So what does the season entail?

Hilltop residents prepare for battle under Maggie’s lead while she is still dealing with the horror of Glenn’s execution (and the notion that she is at odds with keeping the captured Saviors as prisoners or just executing them in cold blood). Rick and company begin to second guess Negan’s plans by constructing a series of battle scenarios designed to use the elements of the present against them. Ezekiel and his group become empowered to take on a direct battle attack against some of the Savours, while things take a turn for the worst. 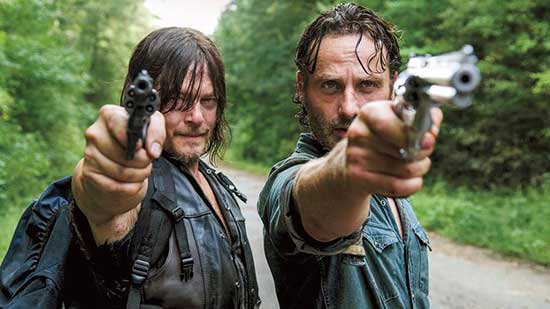 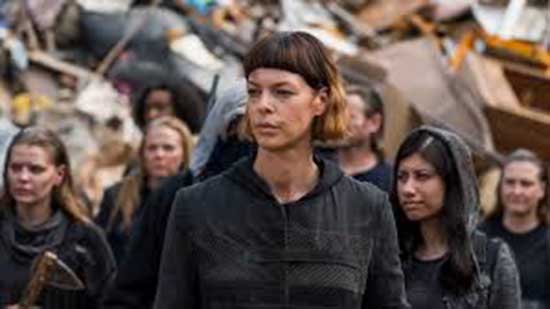 Gabriel and Negan become trapped together under a Walking Dead onslaught which in isolation reveals some personal moments for both of them. Rick and Daryl argue about moments of moral consequences painting an unexpected divide between them. Eugene appears to drink Negan’s koolaid by becoming one of his top soldiers tasked with creating much of the group’s ammunition. Jadis fades more into isolation even rejecting Rick’s call for her help in defeating Negan.

The Saviors begin to attack all 3 of the Alexandria, Hilltop, and Kingdom locations further taking the lead in the dominance of forces. Aaron and Enid attempt to enlist the Oceanside team to support Rick’s efforts. Dwight, as usual, plays both sides of the fence, while never really revealing which team he has chosen loyalty to. Morgan seems to fall more into his self-disillusionment resulting at times in hallucinogenic moments. In short, the pressure here gains momentum. 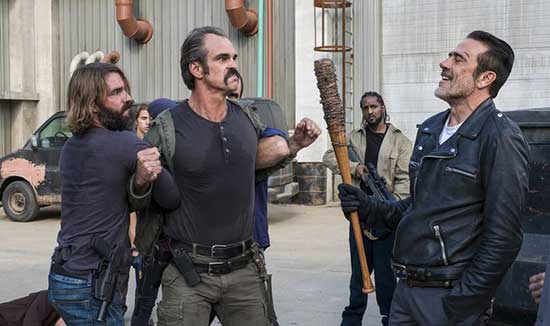 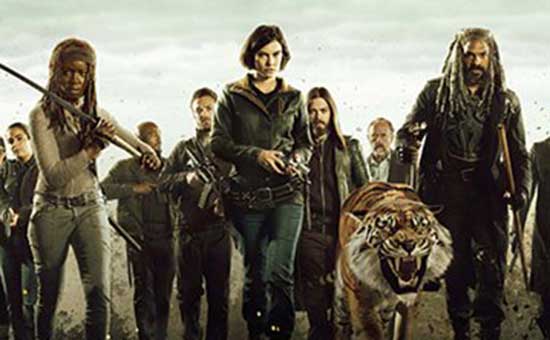 All this and more play out in the Walking Dead dramatics as tension builds, a conflict comes head to head, and all are called upon to play a part in this ultimate face off,

The season will bring resolutions while (as always) leaving quite a few unanswered directions for the next season to take the lead on. Fans of the Negan chapters will gain a few surprises as all the stakes are laid out on the table.

Season 8 essentially is Season 7 part 2, a season where we were exposed to Negan’s cruelty and the demise of Glenn and Abraham. While the timeline here is much quicker than the actual season plays out, it is reminded (per Talking Dead series), that this whole dramatic conflict has still only been a matter of weeks. With that said, new fans (if there are any for that matter that aren’t already) could easily enjoy the whole epic binge-watching this and the last 2 seasons into full resolve! 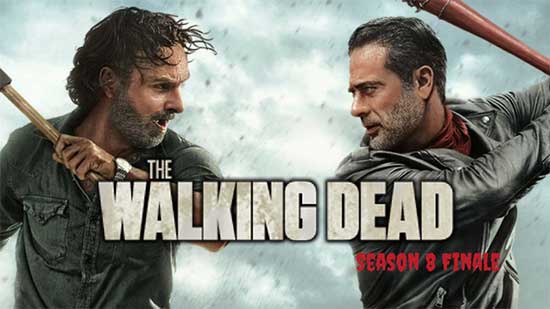 Walking Dead Season Eight arrives on bluray per Starz / Anchor Bay offering a smattering of Behind the scenes goodies and making of’s. For many of us, this just means 1 more important purchase to add to our extensive WH collection (see details below).

Like previous releases, this one is no exception delivering a full package of WD high definition episodes and goodies (Note: my favorite bonus is the inclusion of subtitles for those hard to understand moments in the series)

So without further ado, make sure and support the series by picking up this latest release which promises to be a well deserved horror epic worthy of anything ever seen!

The Walking Dead – season 8 bluray is now available on Amazon