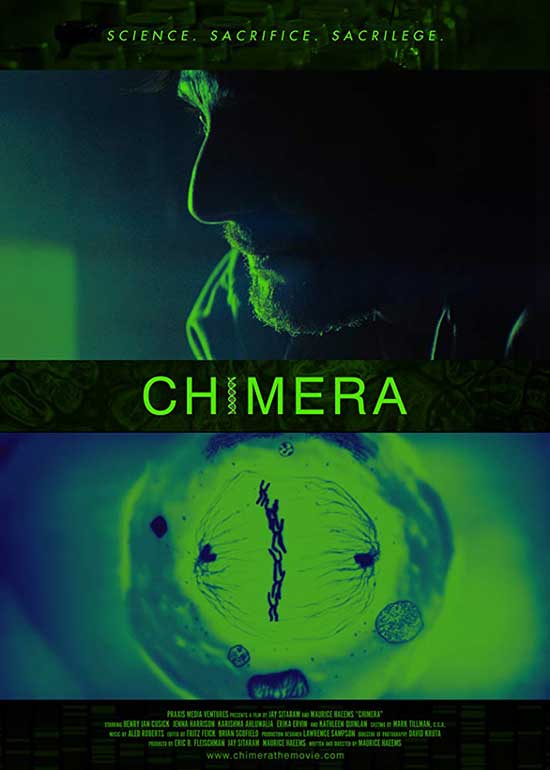 A brilliant but disturbed scientist freezes his children alive, while he races to cure their deadly genetic disease by decoding the DNA of the immortal Turritopsis jellyfish.

Chimera is the first feature film from Writer/director Maurice Haeems, who is fascinated with science fiction and themes of immortality. The film stars Henry Ian Cusick, who I remember fondly from the TV show Lost, as Quint. He is a scientist whose wife is comatose due to a mysterious disease and his children are showing signs of developing the disease as well. The film takes a deep dive into hardcore Sci-Fi and is an impressive first feature from Writer/director Haeems.

In order to cure and keep his children alive, Quint is experimenting with jellyfish that possess a substance that could lead to immortality. The biggest obstacle he faces in his quest to keep the children alive is that he needs stem cells to complete the process he has developed, and those are very hard to acquire. Masterson (Kathleen Quinlan) is a devious fellow scientist who is trying to cure her husband of a strange disease and she has access to stem cells. Charlie (Jenna Harrison) is a scientist who worked with Quint in the past and wants to help him, but she is also romantically involved with him. Henry Ian Cusick is a fantastic actor in any role and he completely envelopes himself in the character Quint. 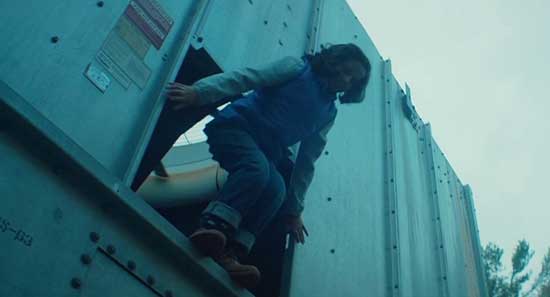 Chimera presents an intriguing story, but the fact that the majority of the dialogue is in extremely scientific terms that are a bit difficult to follow is the major issue I have with this film. Most people don’t know that before I started writing about horror movies, I was a medical professional for many years and have extensive knowledge of medical terminology. I’ve certainly never been a scientist or been involved with research, but I found myself feeling frustrated by the conversations about how Quint intended to extract a substance from the magical jellyfish and also planned to impregnate his comatose wife in order to get stem cells.

Quint slowly begins to lose his grip on reality and there are several dreamlike sequences involving his children that cause you to question what is real and what is fantasy that he has created. His children, Miles (Raviv Haeems) and Flora (Kaavya Jayaram) almost don’t seem real as he explains to them how he is going to freeze them in order to save their lives. He won’t accept that his wife cannot be revived and even though he has a romantic relationship with Charlie, he still believes that he can recreate his family with science and they can all be together again.

Masterson is selfish and evil and makes a deal with Quint, promising that she will give him the stem cells he needs. In reality, she is freezing women against their will and only cares about saving her disfigured husband. Erika Ervin, known for being the tallest model in the world for being 6’8”, menacingly plays Masterson’s assistant Dita. Dita towers over everyone and physically threatens anyone who doesn’t do as Masterson says. Kathleen Quinlan is a well-known, super talented actress and she’s believable and scary as Masterson.

Chimera successfully creates an enthralling, mystical , Sci-Fi fantasy world, but I think the film would be easier to navigate if the scientific dialogue was made simpler to understand. Despite the issues I have with some of the writing, this film features some truly strong actors, an entertaining storyline, and the lighting and cinematography are done well. The special effects are simple, but effective.

Ultimately Quint freezes his children, while also trying to survive Masterson’s attempts to steal his work and kill him. Charlie has developed a plan to guarantee her own survival and future scientific fame and it may not include Quint. At this point, the fate of his children Miles and Flora remains uncertain, as they are frozen and supposed to be reanimated in the future. This is an enjoyable movie, but again the dialogue is too heavy with scientific terms, which can be distracting at times. It is a notable film for a first time writer/director.