“A barnstormer of an entertainment, a fairground ride with dodgy brakes”
– Peter Bradshaw, The Guardian 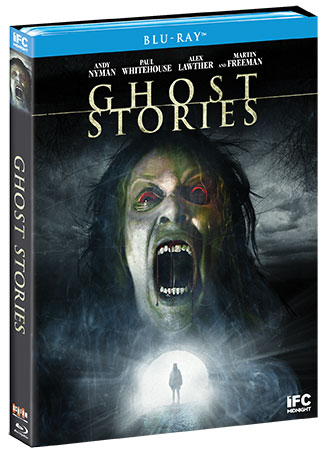 Experience three spine-tingling tales of terror to haunt your dreams! On September 4th, 2018, the delightfully devilish horror anthology film Ghost Stories will make its Blu-ray and DVD debut from Scream Factory, in conjunction with IFC Midnight. Fans of this critically acclaimed film can pre-order their copies now by visiting ShoutFactory.com

A debunker of all things paranormal, Professor Goodman (Andy Nyman, Black Death) has devoted his life to exposing phony psychics and fraudulent supernatural shenanigans. His skepticism is tested, however, when he receives a case file on three chilling and inexplicable incidents: a night watchman (Paul Whitehouse, Corpse Bride) haunted by disturbing visions as he patrols an abandoned asylum; an edgy young man (Alex Lawther, Freak Show) involved in a hellish car accident deep in the woods; and a wealthy former banker (Martin Freeman, Sherlock, Black Panther) visited by the spirit of his unborn child. Even more disturbing is that each of these macabre stories seems to have a sinister connection to Professor Goodman’s own life. Will they make a believer of him yet?