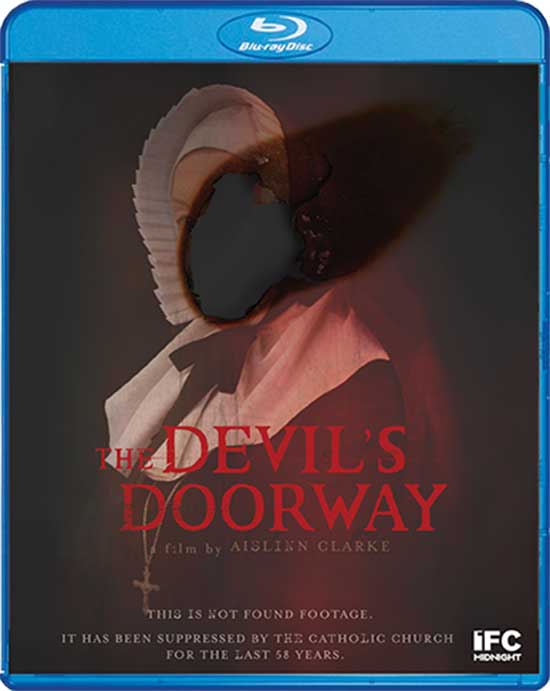 In the fall of 1960, Father Thomas Riley and Father John Thornton were sent by the Vatican to investigate a miraculous event in an Irish home for ‘fallen women’, only to uncover something much more horrific.

Magdalene laundries, also known as Magdalene asylums, were a readily utilized form of confinement and brutality in Ireland from the 18th century to the late 20th century. Run by the Catholic church, these institutions housed “fallen women”, a sugar-coated label to describe prostitutes, young mothers out of wedlock, and women charged with crimes or severely mentally ill to the point of burdening their families. However, several women were arrested and held on false claims. An estimated 30,000 women were housed in these establishments in which they were forced to partake in manual labor with little to no compensation. The abuse and secrecy was so appalling, a mass grave containing 155 corpses was found at one of the laundries in 1933. 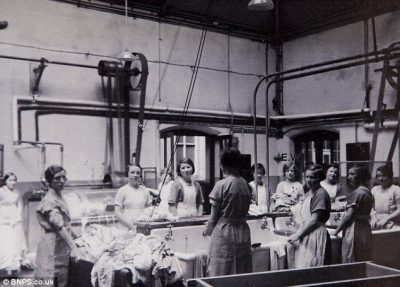 This dark piece of Ireland’s history is explored in Aislinn Clarke’s debut film, The Devil’s Doorway. In an interview with The A.V. Club, Clarke states, “human drama is always the heart of a good horror movie.” The historical context allows viewers to immediately relate to the characters in the film. There is a sense of emotional gravity and genuine investment with a horror film when its premise is grounded in realism whether that be historical fact or relatable humanistic themes and life experiences. Her choice to utilize found footage as the method to convey her story is particularly apt with this sort of history.

Set in the 1960’s, the story follows Father Thomas Riley (Lalor Roddy) and John Thornton (Ciaran Flynn) who are sent by the Vatican to respond to claims of Virgin Mary statues weeping blood at a Catholic Church-run Magdalene laundry. Consulting Mother Superior (Helena Bereen), the two are met with cold skepticism and a secretive reservation that unfolds slowly throughout the narrative. Her pessimistic attitude is anchored in her dissatisfaction of the institution’s funding, and she resents the responsibility of literally having to clean up the church’s dirty laundry. Father Thomas is calculated and logical in his approach to the apparent “miracle” occurring at the laundry as he has debunked several false claims of religious miracles. However, John is a recent seminary graduate who is hopeful and idealistic that a true act of God is occurring void of rational, scientific explanation. Their character foils provide a delicate balance that drives the plot and allows the audience to critically assess both possibilities, but their chemistry is somewhat lacking in terms of an emotional bond between a predecessor and his protégé. 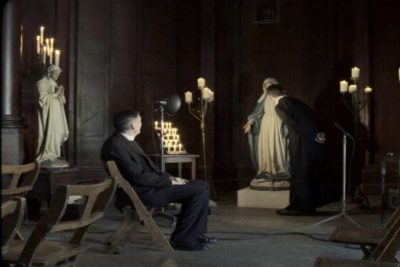 The divine duo discover evil lurks within the walls of the church as they encounter a young girl chained in the basement.  A wall adorned with numerous crosses lay above her head while she is shackled and seemingly possessed by a diabolical force while she is pregnant. Father Thomas demands that she be treated humanely while he examines the nature of her apparent possession or potential power. There are layers of secrets hidden beneath the Laundry and within the nuns who run the Church’s operation. A tunnel filled with eerie yet playful apparitions and cryptic symbolism explores the notion of demons in both the religious sense and the human sense, as man is ultimately capable of committing just as much evil in the world as a supposed demon. 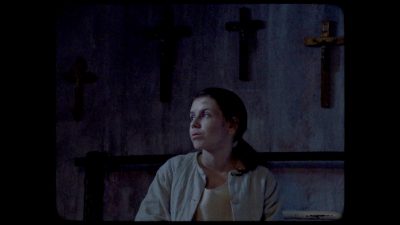 The film is shot as a compilation of Bolex reels and cinematographer Ryan Kernaghan captures the faded and alluring 16mm aesthetic throughout. The vintage visuals accurately mirror the worn-out optimism of the fallen women as the story spirals into the corruption of the church. Recent found footage films such as Unfriended and Creep employ present-day technological approaches to propel the subgenre forward and capture realistic terror through technology and connections among each other through the internet. Shying away from this convention, Clarke makes an apt decision to go back in time and explore a piece of haunted history through the lens of a dated camera method, thus resulting in a cinematic impact that feels both antiquated and relevant in present-day. While other films such as The Blair Witch Project and As Above, So Below utilize found footage to explore folklore and mythology, The Devil’s Doorway is more politically driven in its manner of spotlighting female oppression and the religious agenda in a hostile environment that in reality did not cease to exist until 1996 when the last Magdalene Laundry was shut down.

The use of tension and sly editing choices create disturbing sequences that otherwise could have been easily saturated with jump scares. The fact that the film is a slow burn and focuses more on mood than cheap fear tactics alongside an abrasive sound design allows the story to set in deeper and really conveys the strength of Clarke’s directorial talents. While the acting is not entirely engaging at times and there are a few overly noticeable nods to The Exorcist that can almost come off as trope, the artistic talent is present and the story line is unique alongside its approach within the genre. 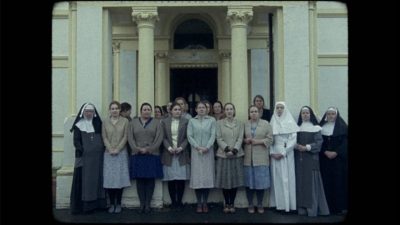 Clarke gave birth to her son the same year as the last Magdalene Laundry. She has openly stated that she could have been one of those women, and therefore has a great empathy for those who were imprisoned and had their lives stolen. In a way, The Devil’s Doorway is a love letter to women, “fallen” or not. A cathartic representation and allegory to the hell that these women did in fact truly live.  Clarke shines light on a malignant history through captivating storytelling that appears to be seasoned instead of the work of a first-time director. She possesses a strength for scares rooted in realism but also in cinematic language that translates on screen through her craft. The horror genre is blessed to welcome another innovative female director who is telling stories and rebelling against the traditional gaze–pushing the envelope and experimenting in true artistic fashion.

The Devil’s Doorway is currently streaming on VOD and available in select theaters.
and can be order per Shout Factory in bluray