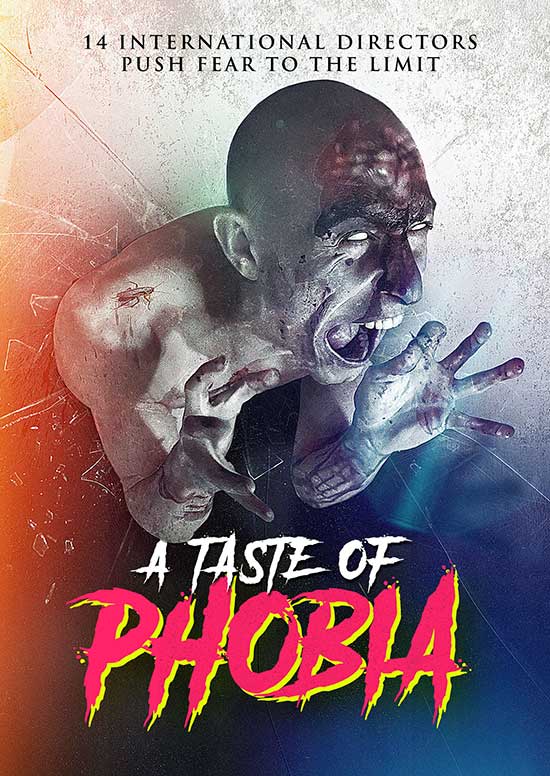 For this anthology movie, producers Vestra Pictures assigned international directors with a phobia and set them to work making a horror short about it.

A Taste of Phobia is a horror anthology film put together through the cooperation of Vestra Pictures, Trash Arts Productions, and Artsploitation Films. The theme here, fairly obvious by the title of the film, is fear. Much like the set-up of The ABCs of Death, where a letter was assigned to each participant, here each filmmaker was given a fear (some familiar ones, and some not so common ones) and the task of creating a short horror film somehow incorporating it. While most of the participants were invited, a handful of spots were open to a submission call in early 2017. These films are from a variety of places – a few from the United States, and one from Nigeria, but most come from Italy and the UK – and are made by a variety of filmmakers – some familiar names, some first-time directors. A Taste of Phobia contains 14 segments which span from creepy to goofy to nasty and disgusting, and while the afore-mentioned alphabet-inspired anthology had definite hits and misses, most of these short films are pretty enjoyable.

The whole thing starts with “Chaetophobia” (fear of hair), written by Luca Nicolai (writer of short films Mirror and The Colorful Life of Jenny P) and directed by first-time filmmakers Lorenzo Zanoni and Alessandro Sisti. This bloody Italian film is a strong start, setting the overall tone by presenting a woman tied up in a basement while her captor carefully shaves his body in her apartment. Things get violent when she escapes, and we discover that while razor blades can be dangerous, sometimes waxing is even more brutal – eat your heart out, Cabin Fever!

“Pharmacophobia” is the fear of medication, and in US writer/director Chris Milewski’s film (see short films The Cold Eyes of Death, The Ghosts of Eden Hall, and others), we learn why some people have every reason to be wary of the elixirs prescribed them. This one is full of snot, bile, and assorted bodily waste…and speaking of bodily waste, “Coprophobia” is not only the fear of feces, but the title of UK writer/director Jason Impey’s short (he’s already directed over 100 films, shorts and features, since 2000). Impey throws a little blood at us, but it’s mostly poop splattering the screen, as we follow one man’s journey to stave off the deadly BM that is tormenting his insides.

“Mysophobia” features and all-star crew of up and comers, with writers Domiziano Cristopharo (Red Krokodil, House of Flesh Mannequins) and Tony Newton (founder and CEO of Vestra Pictures, director of numerous short films) and director Poison Rouge (director of the much-anticipated American Guinea Pig: Sacrifice). It’s not surprising that this is one of the gorier segments, seeing not only who our filmmakers are, but also what the title means: fear of germs. The premise is that a man with an obvious OCD phobia stays the night at a motel, and soon his precautions to stay clean are thwarted. Let your imagination run, it probably won’t match Rouge’s bloody vision.

Speaking of Cristopharo, he later returns with his own written and directed segment, “Mageirocophobia.” This segment delves into the fear of cooking and manages to be highly disturbing and a little campy and silly all at the same time, which is quite often a winning combination. Going right along with this disturbing + silly = great equation, “Somniphobia,” the fear of sleep, by the American filmmaking team of Michael J. Epstein and Sophia Cacciola (see Blood of the Tribades for a great display of their teamwork), manages to combine dark comedy and bloodshed with excellent results as well. Director Epstein stars as an over-worked employee whose boss pushes his demand for productivity to a whole new level. These two segments, along with Impey’s, are the more light-hearted of the group, and all three work on both the humorous and grotesque levels.

Some segments unfortunately don’t work as well as others, although each still brings something worthwhile and entertaining to the table. Writer/director Dustin Ferguson, master of the lesser-known sequel, tackles “Mazephobia,” the fear of mazes (obviously), and manages to take the subject in an unexpected direction, but while his message is appreciated, the delivery comes across on the bland side. Similarly, British writer/directors Jackson Batchelor (“Politicophobia,” fear of politics) and Sam Mason-Bell (“Oneirophobia,” fear of dreams) present stories that are adequate for the anthology – Batchelor takes a They Live approach, while Mason-Bell delivers a colorful, surreal vision – but in overall quality fall toward the lower third of the group.

Surrounding the various segments, working as both the wraparound story as well as its own segment, “Hemophobia” (fear of blood) by Italian writer/director Davide Pesca starts with a woman sitting alone on her couch, flipping through channels and finding the short films on TV, but ends up becoming a veritable blood feast of scenes involving murder and nude, blood-drenched women. Finally, with an asterisk next to it, is Italian writer/director Alessandro Giordani’s (Sator, Videoblog) “Astrophobia,” which is the fear of stars. This is the story of a normal man falling for a semi-famous woman and what becomes of their time together. It looks interesting though. 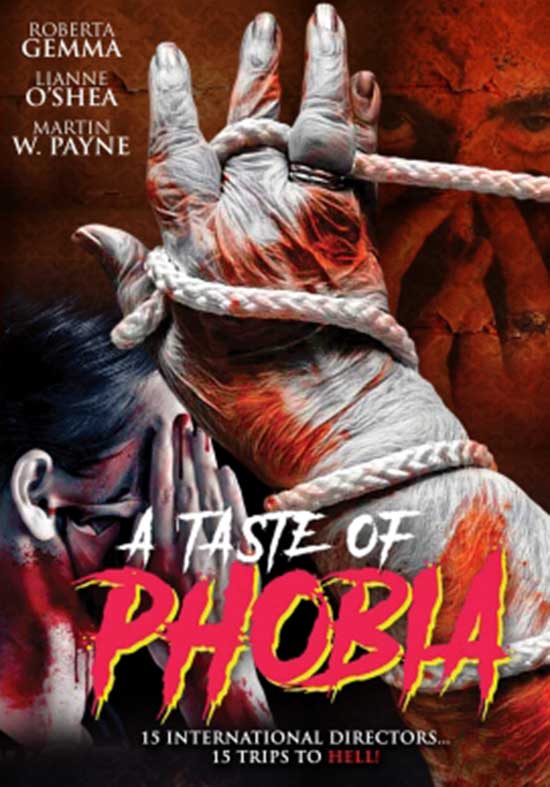 The two segments that seem to really stand out in this collection – which is saying quite a bit, seeing as how every segment has strength to it – are British writer/director Rob Ulitski’s “Gerascophobia” (fear of aging) and Nigerian writer/director Sunny King’s “Nyctophobia” (fear of the dark). Ulitski (VR, Awake) presents a short film reminiscent of some of the better Twilight Zone or Outer Limits sci-fi shorts. His story presents an anti-aging process, and dips into the universal desire to stay young and pretty, and what lengths some might take to achieve this. It strikes that familiar, creepy futuristic tone from the start, and then takes a twist or two to bring us to a jaw-dropping conclusion. King (Unspoken, Signs), on the other hand, takes a very familiar fear of the dark and tells a somewhat conventional story of a woman afraid of the dark that ends up delivering what might be the creepiest moment of the whole anthology.

A Taste of Phobia, along with so many other Trash Arts and Vestra Pictures productions, proves not only that the short film is alive and well in the horror genre, but also that there is a market for it. As a whole, this is a well put together anthology film – there is a clear theme tying all of the stories together, all of the shorts are of similar quality, both technically and in content, and at no point does the film slow down or lag. These are independent filmmakers doing what they do best, so of course the budgets are on the lower side and the names involved aren’t Hollywood names. But in the big picture of horror anthologies over the years, A Taste of Phobia is one of the good ones. A must-see for fans of the ABCs of Death franchise as well as Tales of Halloween and Holidays.