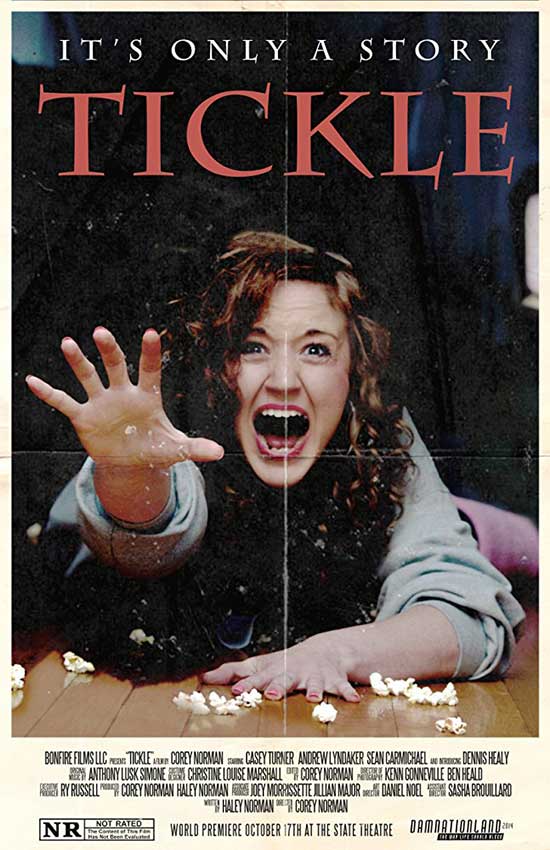 We all know how 80s horror movies start: a babysitter and a little boy alone in a house. When things go bump in the night , are they the imagination of a scared little boy, or is someone- or some thing- in the house with them?

More short films, kiddies! Today we have TICKLE, written by Corey Norman and directed by Haley Norman. This is a kickstarter funded film.

The classic 1980s babysitter scenario – Trudy (Casey Turner) is trying to get her young charge Charlie (Andrew Lyndaker) to go to bed so she can watch movies with her boyfriend Donnie (Sean Carmichael) when he gets out of work. Trudy tells Charlie a scary story about a troll called Tick Tack who tickles children’s feet when they sleep, and if they don’t laugh the troll cuts their feet off.

Of course she’s trying to scare the kid. There’s no such thing as trolls, right?

If you’ve ever seen the classic babysitter horror movie, then you already know how this is gonna end. The film is set in the 1980s, and the attention to detail is pretty good.  Nothing too over the top, but just enough that you get the idea.

I do want to call out the gore and FX work on this film. Liam McCarthy is listed as the effects artist, and he really did a good job on this. His IMDB lists only three films in total for his credited work, but he definitely has some serious skill. The monster (played by Dennis J Healy) is really nasty looking.

Good stuff all around on this one.

Using my special short scale of one to five, five being awesome, I’m giving this film 4 feet.