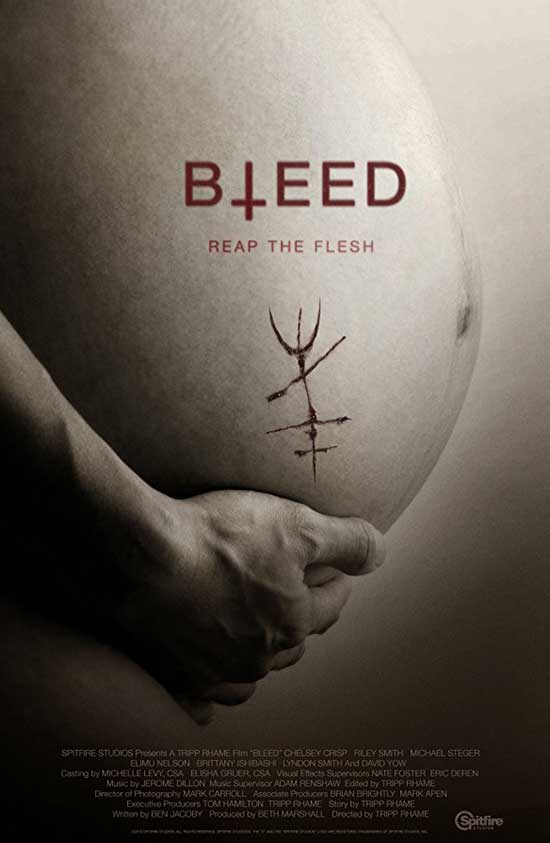 It seemed perfect – a new house, a new marriage, a child soon to be born. But when Sarah and Matt invite their friends to celebrate, the situation turns deadly as they enter a burned-out prison on a ghost hunt.

It seemed perfect – a new house, a new marriage, a child soon to be born. But when Sarah and Matt invite their friends to celebrate, the situation turns deadly as they enter a burned-out prison on a ghost hunt.

Bleed was written by Tripp Rhame (Ruby Falls) and Ben Jacoby (Borderland, The First Omen) and directed by Rhame. Fun fact: The bar used in The Walking Dead in the episode of Season 2 where Hershel decides to start drinking again and is rescued by Rick and Glenn is the same bar in the opening scenes of this movie.

The film begins in 1979 when nine year old Ana goes into town to buy some candy and is chased and kidnapped after the locals realize she has a moon shaped birth mark on her wrist. Fast forward to present day where Sarah (Chelsey Crisp) and Matt (Michael Steger) are expecting a baby and have just moved into a new house. Sarah has a flat tire and the when the local sheriff stops to help her, he begins acting oddly after he notices she has a moon shaped birth mark on her neck. This is the first indication that Sarah and Matt have moved to the wrong town. After Sarah returns home, the couple invites their friends Bree (Brittany Ishibashi) and Dave (Elimu Nelson) over to see the new house and Sarah’s free-spirited twin brother Eric (Riley Smith) shows up uninvited with his girlfriend Skye (Lyndon Smith).

When the group of friends discovers little Ana’s grave near the house, Eric and Skye tell everyone about their ghost hunting adventures, which no one else takes seriously. Eric even tells them that he and Sarah were attacked by ghosts as children, but they were saved by a bunch of butterflies, which upsets Sarah and causes her to go for a drive alone. Dave tells the rest of the group about a local serial killer who allegedly ate his victims called Cannibal Kane (Raj Kala). Kane was captured and sent to a nearby prison, which burned down, killing everyone inside. There is a rumor that the burned out prison is haunted so the friends decide to go ghost hunting at the site. Throughout all of this, there are flashbacks showing that Kane tried to help young Ana before she died, but there is no explanation of why Kane wanted to help her.

This is a low budget film, but overall well done. The characters are pretty believable. The fact that the story becomes puzzling by the end of the film is the biggest issue I have with Bleed. Once the friends enter what’s left of the prison, they begin experiencing violent paranormal activity. The ghost of Kane is a prominent character and appears several times in the film. He attacks everyone except Sarah and at one point he offers her a butterfly, which is obviously a reference to the butterflies that saved her and Eric when they were children. The bloody special effects work in favor of the film and are effective. Ghosts of the townspeople are pursuing Sarah while her friends meet with gruesome deaths in the prison.

The subtle symbolism in the film indicates that witchcraft may be involved, but the plot becomes so convoluted by the culmination of the story that it’s really not clear who or what wants Sarah and her baby and why. Will Sarah survive the carnage around her? Will the baby survive? Are any of her friends left? You’ll have to watch the movie to find out. 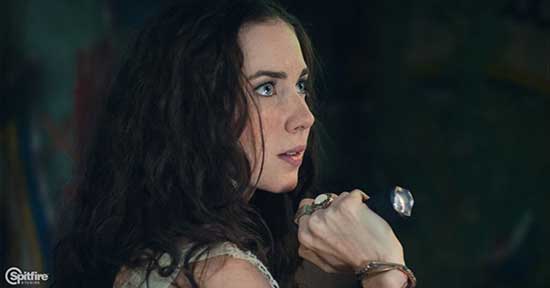 I enjoy films that leave plot points up to the interpretation of the viewer, but I find it frustrating that this story picks up steam and then goes nowhere. Touting somewhat strong performances and entertaining special effects, Bleed is a supernatural horror film that I want to recommend, but the final act leaves a lot to be desired.