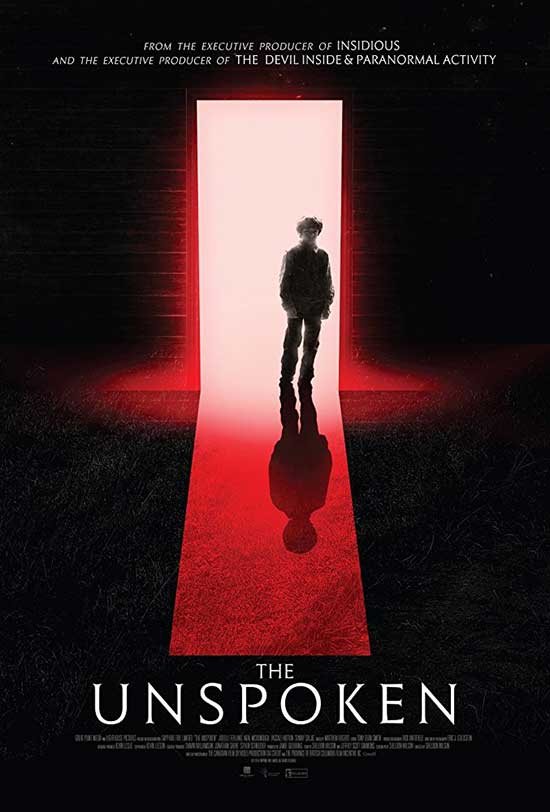 In 1997 the Anderson family vanished from their home without a trace. No bodies were ever found. For 17 years the house has remained undisturbed… until now.

The Unspoken is a 2015 horror film that was written and directed by Sheldon Wilson. I previously reviewed The Night Before Halloween, which was also written/directed by Wilson and I had some serious issues with the story. The Unspoken is definitely the superior film and has an intriguing plot, despite the use of some common horror tropes, but we’ll get into that in more detail later.

The film opens with a somewhat familiar scenario. Police arrive at a home late at night to find the family that lived there has vanished without a trace and the interior of the house is covered in blood. There are lots of crucifixes in the house and a book open to a page with instructions on how to perform an exorcism. If you’re thinking to yourself, “Oh no, not another possession movie,” stay with me; you may be pleasantly surprised.

Fast forward seventeen years since the family disappeared and The Unspoken introduces Angela (Jodelle Ferland), a teenager plagued by nightmares since her mother took her life several years earlier. Angela’s father (Lochlyn Munro) is out of work, so when the owner of the daycare where Angela works tells her about a part-time babysitting job, she jumps at the opportunity. The downside is that the prospect of a new job to help pay the bills comes with a catch. It seems that a new family has moved into the old house where the strange events took place seventeen years earlier and the idea of even stepping foot inside the house horrifies Angela, but she’s not sure why. 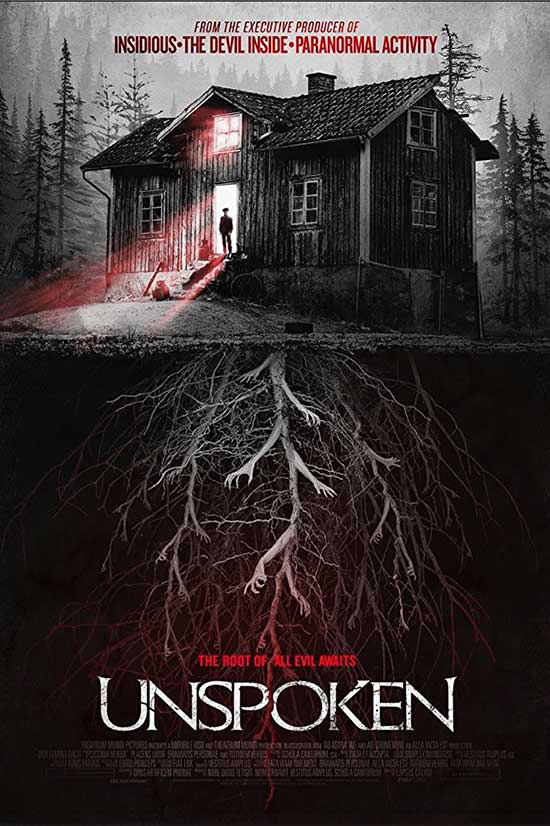 Jeanie (Pascale Hutton) and her son Adrian (Sunny Suljic) move into the old house that has stood empty since the unexplained tragedy took place there. When Angela meets them for the first time during her job interview as the new babysitter, Jeanie explains that nine year old Adrian stopped talking completely after his father passed away. Sunny Suljic spends the majority of his time onscreen as Adrian staring blankly into space, but he is one of the creepiest kids I’ve ever seen and doesn’t even need dialogue to be effective in The Unspoken.

Ignoring the warnings of her girlfriend Pandy (Chanelle Peloso) and also going against her father’s wishes, Angela accepts the job and begins taking care of Adrian and that’s when paranormal activity begins whenever she’s in the house. I’m not even sure why the secret romantic relationship between Pandy and Angela is even hinted at in this film when the two share a kiss. It seems unnecessary because there is no other mention of it in the film and apparently it’s a disgusting idea to be a lesbian in the small town where the story takes place, and it seals the fate of the doomed lovers, which seems to be the case in almost every film depicting female characters who are more than just friends.

The unexplained activity in the house consists mainly of objects moving on their own and it’s as if the house itself is killing off the undesirable characters in the film. Aside from a scene where a guy is inexplicably nailed to the floor, which borders on being humorous, there is nothing terrifying about The Unspoken. The special effects are minimal, but sufficient. As I mentioned earlier, on the surface this film looks like just another possession story, but the plot twist and big reveal of what’s really been going on in the old house is incredibly creative and not something I’ve seen before in other films.

Pascale Hutton and Jodelle Ferland both give strong, memorable performances in The Unspoken and I’m also impressed with just how damn scary Sunny Suljic can be without saying a word. The twist of the story is so original that it almost makes up for the stereotypical characters and lack of meaningful dialogue. The Unspoken contains a lot of generic horror, but it’s never boring and I think a feature length film about Jeanie and Adrian’s backstory could actually be fascinating. 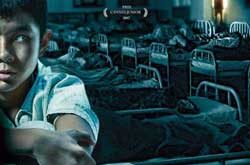