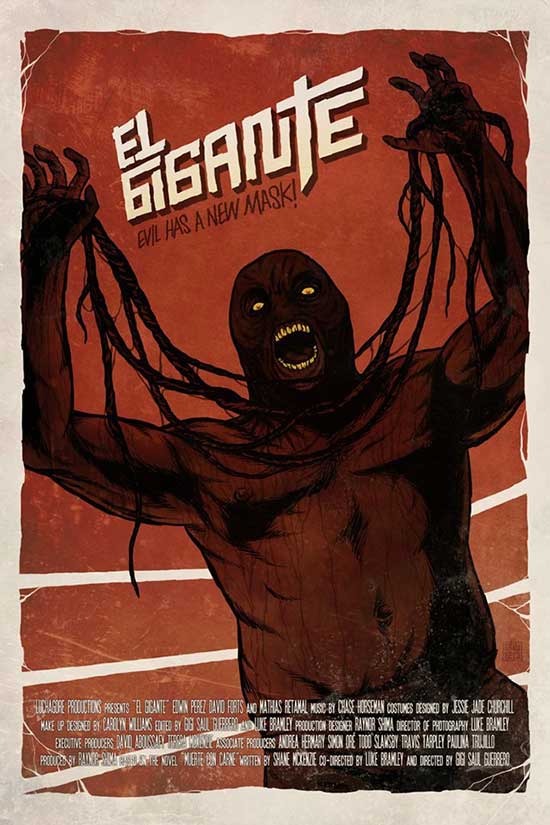 After attempting to cross the US/Mexico border in search of a better life, Armando awakens in an unknown room, his body broken down and a Lucha Libre mask sewn into his neck. He attempts to escape, but is surrounded by a sadistic family, who watch him with hungry eyes. The only chance for Armando’s survival in this hellish nightmare is to last in a wrestling match against the most terrifying villain of all: GIGANTE!

More short films, kiddies! Today we have EL GIGANTE, written and directed by Gigi Saul Guerrero and Luke Bramley. The film is based on a novel called MUERTE CON CARNE by Shane McKenzie. This is a Kickstarter funded film, featured on CryptTV and winner of many festival awards.

The production company is called LUCHAGORE PRODUCTIONS. Now, when I saw that, I was already a happy panda. I LOVE Lucha Libre and horror films, so if someone puts the two together, I am in hog heaven, people.

Our story opens on Armando (Edwin Perez) negotiating with a coyote (human smuggler, if you don’t know) to get his family across the US border to a better life. In the real world, this is a dangerous proposition at best. You never know if they’ll just take your money and dump you in the desert. 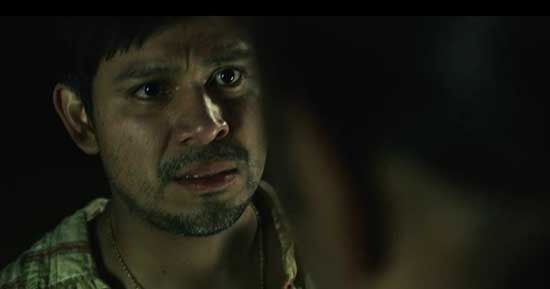 Poor Armando can pay for his wife and daughter but doesn’t have enough to go himself. He appeals to the coyote’s better nature, something the coyote apparently lacks. Armando is sent on his way, determined to cross the border and meet his family on the other side no matter what it takes.

He almost makes it, too. But he passes out from dehydration just as he climbs the fence. There is a guy there, though. A guy who gives him water and Armando thinks maybe he’s gonna be ok.

Armando wakes up with a Lucha mask sewn to his face, and finds himself faced with a massive luchador (played by David Forts) who is ready to beat his scrawny butt. The only way out of this is to win the match, which doesn’t seem likely.

This film is pretty gruesome. I’m not gonna lie about that. Some amazing gore work, and the violence is well choreographed. The supporting cast are few but so well done. SO many creepy, bizarre characters that you just wanna know the story behind. I assume the novel gives us far more about these characters.

LuchaGore Productions has many other films in their catalogue and they are definitely worth checking out.

Using my special short scale of one to five, five being awesome, I’m giving this film 5 luchadors.