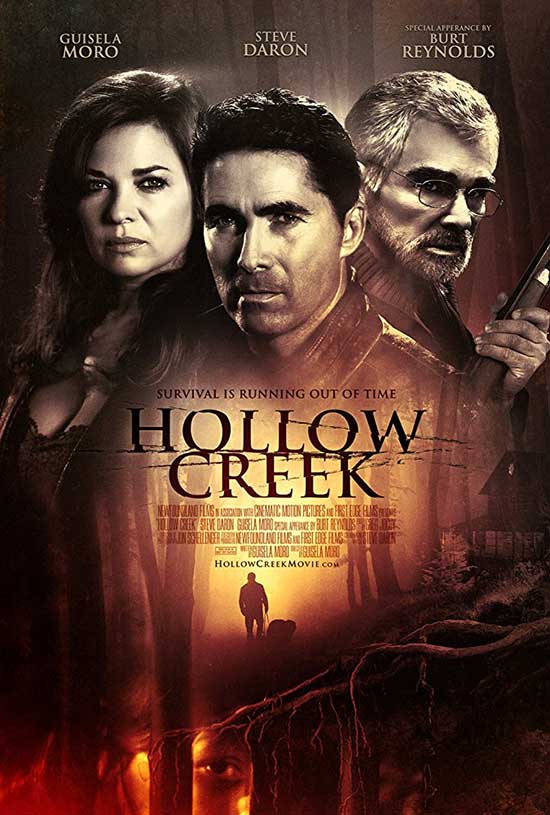 Seeking inspiration for his latest horror novel Blake Blackman, a writer from New York, retreats to a remote cabin in the Appalachian Mountains. He is secretly accompanied by his lover Angelica Santoro a book illustrator who he’s been having an affair with. She brings her dog along with them. Upon arrival they hear an amber alert on the radio and first learn about the case of several boys missing in the area. Soon after the arrive to the cabin her dog starts acting strange like there’s someone or something out in the woods. A twist of fate turns the romantic interlude into an abduction-murder case when Angelica follows a lead to one of the missing boys and she mysteriously goes missing. Blake then becomes the prime suspect of her disappearance.

Hollow Creek was written and directed by actor/director Guisela Moro, who is also known for A World of Pleasure (2014) and Tierra de Pasiones (2006). Hollow Creek was filmed in West Virginia, where the story takes place. Writer/Director Guisela Moro actually adopted a puppy, Brandy (who appears in the movie), from a breeder in Wyoming County, West Virginia and was so blown away by the mountain landscape that she wrote the thriller Hollow Creek around the location and shot the film there. 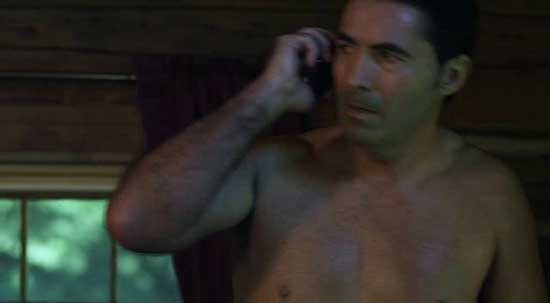 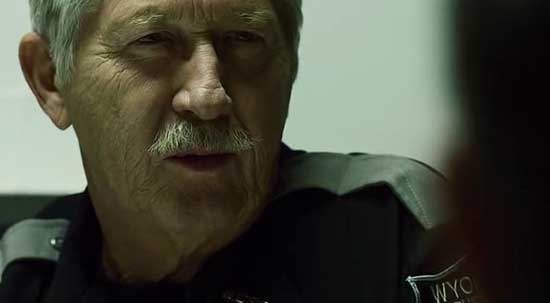 Hollow Creek tells the story of a horror novel writer, Blake Blackman (Steve Daron) who goes to a mountain lodge to write and takes his lover Angelica Santoro (Guisela Moro) with him. The cabin belongs to Blake’s publisher and he doesn’t tell anyone that Angelica is with him. His wife has no idea that he is having an affair with Angelica. Angelica brings her dog Brandy along and almost immediately she begins experiencing strange occurrences.  What she and Blake don’t know is that several young boys have gone missing in the area and they have not been found yet.

The locations in West Virginia where Hollow Creek was filmed are stunning and the weather was very cooperative, but the story suffers from repeated plot holes as well as pacing issues. The film plays out a lot like a soap opera or Lifetime movie. Steve Daron isn’t very convincing as Blake and he lacks the passion the character requires to carry the majority of the film alone. 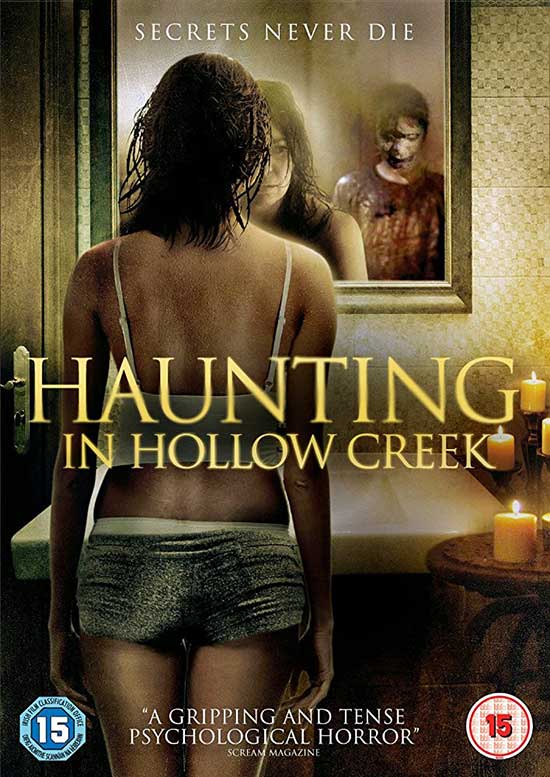 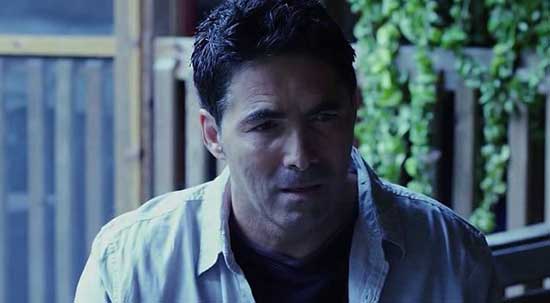 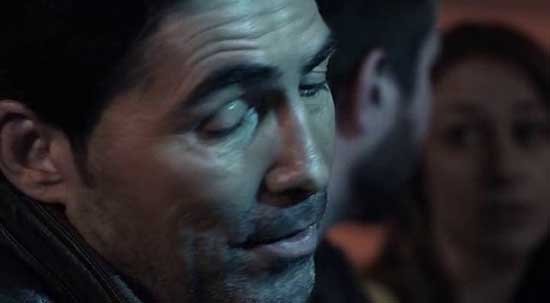 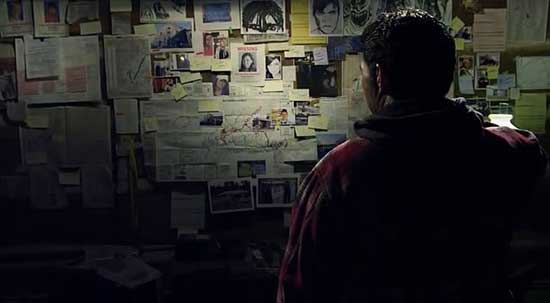 On the other hand, Guisela Moro is fantastic as Angelica and gave a remarkable effort with the direction of the film. Although the story of the kidnapped boys is familiar, the movie had the potential to be an entertaining thriller, but in my opinion it instead focuses too much time and energy on the romance between Blake and Angelica. I would have preferred more of a backstory on the kidnappers and how they went about committing their horrible crimes. 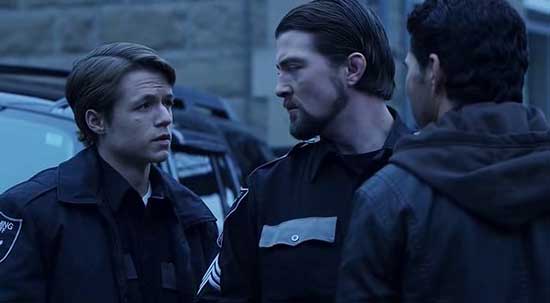 The legendary Burt Reynolds has a brief role in this film as the grandfather of one of the kidnapped boys and I really wish he would have had more screen time. His character is the most interesting character in the movie and of course his performance is enjoyable.  I am impressed with the fact that he is a part of this project. 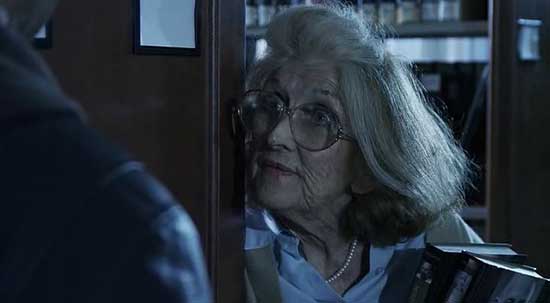 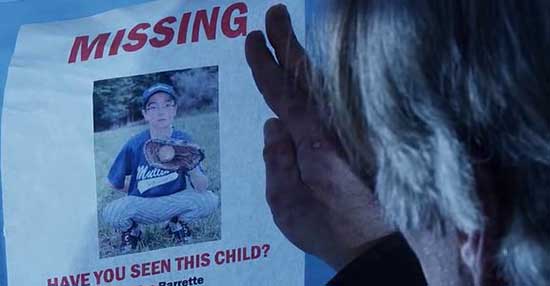 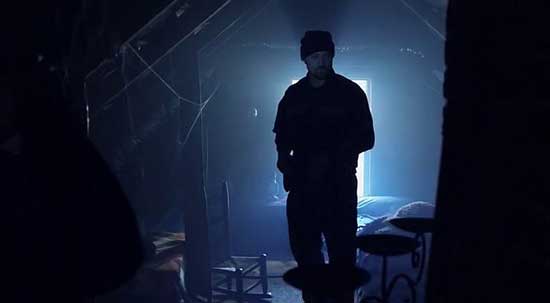 After seeing what looks like a mysterious little boy and learning the shocking truth about her own health, Angelica disappears without a trace. Blake is heartbroken and frantic to find Angelica and attempts to enlist the help of the local police. Unfortunately, the police suspect that Blake is responsible for Angelica’s disappearance and subject him to repeated questioning and even a polygraph test, which he fails. Blake’s publisher and friend tells him he can stay in  the cabin in West Virginia as long as he needs to, but the company attempts to cut all ties with Blake due to bad publicity surrounding the missing Angelica. Once Blake is able to convince the police he is innocent and he persuades them to help him, it may be too late for Angelica.