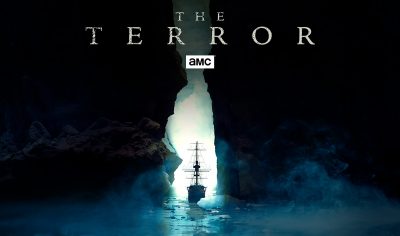 The Terror is a fictionalized account of Captain John Franklin’s doomed expedition to discover the Northwest Passage. Based on the 2007 Dan Simmon’s novel of the same name the story follows the crew members of the ships HMS Erebus and HMS Terror as they are lost among the ice, chaos, fear, and monsters of the Arctic.

You have to know a couple things about me before we jump into this particular review. When I am not overindulging in horror television I am a theatre costume designer with a preference for working on period dramas, and I am obsessed with accurate historical detail. I am one of those terribly annoying people who will rant about the misplacement of a pocket watch or a miscolored button (and don’t get me started on zippers in clothing that is meant to exist before about 1920). Second to costumery I analyze every detail of a room in a scene waiting to shout “but that Wedgewood pattern wasn’t in production until 1812!”, this explains why I always find myself watching TV alone. More than once I have ditched an entire series that has received rave reviews because of one too many anachronistic errors and off-kilter detail (I’m looking at you “Penny Dreadful”). So I begin every new period series with trepidation. I am also terribly afraid of the sea, so I’m a little on edge as the series begins.

And yet, every detail is exquisite. The craft of this production alone is worth a dedicated viewership. When the ship is in motion the overhead lights sway, when the ship is frozen in ice the lights are all still. The sound artists deserve every award possible as a lot of the atmosphere and high production value is based solely on the perfectly timed, creeping and urgent sounds. The costumes are unsurpassed in accurate detail and I found no fault in the sets which made me feel cold and slightly seasick. I have digressed mightly, however, the fine art of viewing “The Terror” is not the only reason this is a grand entry into the pantheon of this golden age of television. 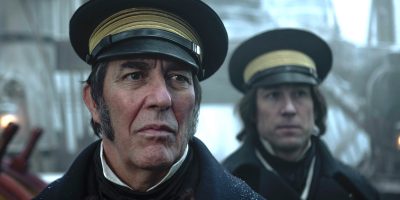 At the heart of the story is the character of three men wrapped in their delicate professional and personal relationships with each other as well as other members of the crew. Captain John Franklin (Ciarán Hinds) the optimistic, often short-sighted and God-praising commander of the expedition as well as captain of HMS Erebus,  Captain Francis Crozier (Jared Harris) the intelligent, hard-pressed and often discounted second in command of the expedition, and captain of the HMS Terror and the gallant and charming,  capable Commander James Fitzjames (Tobias Menzies) third in command of the expedition and exemplary “right hand man” through the story are the nucleus of the ill-fated adventure. 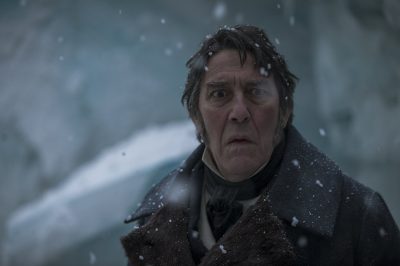 Yet there are many other members of the crew including kind-hearted, adeptly skilled Dr. Harry Goodsir (Paul Ready) and the cagey Cornelious Hickey (Adam Nagaitis) who weave in and out of the story with great skill and importance. Though there are few female characters, most of whom show up in flashbacks within personal stories, Nive Nielsen as the quiet and mysterious Inuit “Lady Silence” is the perfect contrast to often stuffy Britishness of the men and what becomes of their stories. 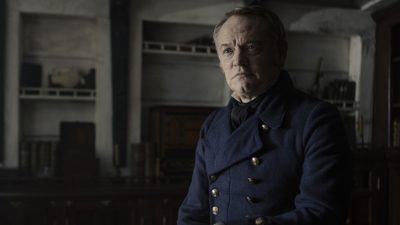 The bulk of the story takes place while both ships are frozen solid in ice just north of King William Island. The characters and relationships of each man become extremely important in how they handle the daily struggle and strife of being lost in an Arctic wasteland. Originally full of the spirit of adventure the men’s hearts begin to darken as supplies, options and hope thin out. As “The Terror” is based on historical facts and you are essentially told at the beginning of the series how it ends you feel a brooding sense of urgency in every scene, from the nonchalant pour of liquor to the laugh among mates. The bleakness of the ice and snow with reminders of the clawing gray-blue of the frigid deep ocean all around feel claustrophobic, edged with dare I say – a terror. As someone who tried to overcome their fear of the ocean by scuba diving wrecks (and serving only deepen said fear), the underwater scenes induced near panic attacks upon viewing – that is a huge thumbs up from my horror loving little heart. 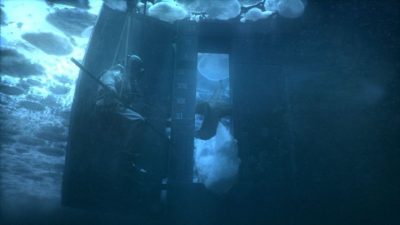 While the art of high production value and the creeping sense of cold terror draw you in suddenly you are bludgeoned with real-world horrors like descending madness, cannibalism, and desperation. And then an actual monster shows up to rip things up a bit. “The Terror” does indeed have a monster, even if the real horror is being reminded of the brutal chaos that tends to plaque ungoverned men. Swirled within the near anthropological story about what happens to humans when all odds are against them is a fair dose of the magical and mythically terrifying. Antediluvian Inuit mysticism and haunting, hunting ice monsters plague the already beleaguered crew within a perfectly crafted, engaging and oftentimes deeply emotional story. For history nerds, horror fans and appreciators of good television I would say this is highly recommended viewing. 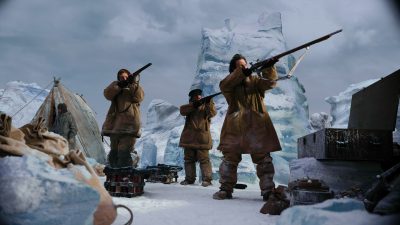 As of this writing “The Terror” airs Monday nights on AMC in the United States.