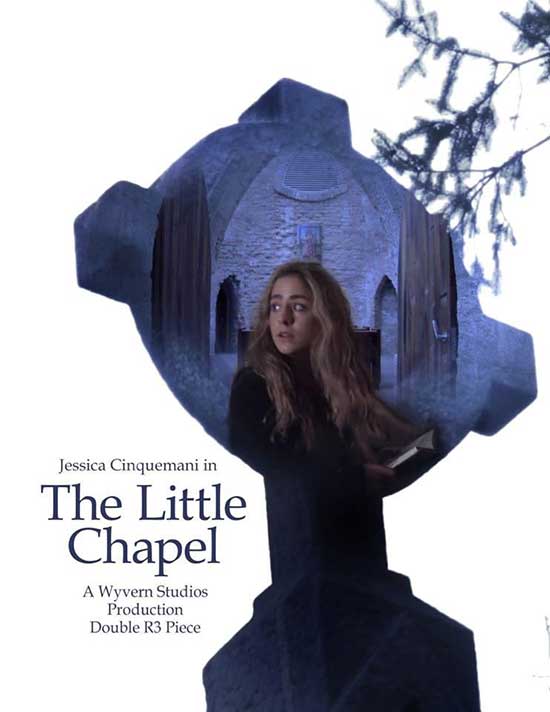 A woman goes to a little chapel and reads from a book of spells (I think), only to unleash an evil spirit.

I love short horror films and have seen a ton of great ones in my lifetime. At the same time I have seen my share of mighty bad ones too, and after watching Richard Schertzer’s  “The Little Chapel” I guess I would have to say that it falls somewhere in the middle. It isn’t great but it also isn’t horrible and is at least worth a look to see what it is all about if you are curious. Some parts of it works while others don’t, so after everything was said and done I suppose that it could best be described as being just so-so.

The short focuses on a young woman who goes to a small chapel and starts reading from a book (I think it is supposed to be a book of spells but I’m not sure since there is no sound other than footsteps, laughter, and the like for some odd reason) when suddenly we hear an eerie laugh and the woman looks on in horror as the door of the chapel slams shut. I wasn’t exactly sure what was supposed to be happening until I looked it up on IMDB and the synopsis there says that the woman is trying to bring back her dead friend but to be honest I would have never known this if I hadn’t looked it up. The main reason (and probably the biggest weakness of the film in general) is because there is really no sound so we don’t have a clue as to what is going on in the film. I think that not having sound was a mistake for a couple of reasons mostly due to the fact that the viewers really doesn’t get why this woman has gone to a chapel and is reading out of some book. I get what the filmmakers were going for as it makes things a little more artsy and probably sounded great on paper but it doesn’t quite work and I have a feeling that it just confuses viewers more than anything.

I also thought that it was just a little too short and it doesn’t have a whole lot of substance. Clocking in at two minutes and thirty seconds there just isn’t a whole lot going on here and there could have been a little more to it. As with the whole no sound thing I get what the people behind it were going for but I’m not sure that it worked. They could have added just another minute or two to it and shown the evil spirit that is laughing at the woman if nothing else just so we could get a look at what is so terrifying to her. I also think that a quick flashback scene (about thirty seconds to a minute in length) would have been nice just so we would know who her friend was and what happened to the person. While I think that the film itself has an interesting premise (once I looked it up and saw what it was) it just seemed like something was missing and that the people behind it didn’t exactly know what they wanted to do with the concept so they just shot a quick two- and- a- half minute film and called it a day. I wonder if the original script wasn’t a bit longer and if so I am a little puzzled as to why they didn’t shoot that one if that was the case. 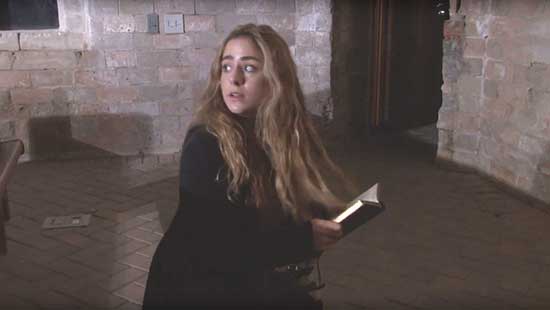 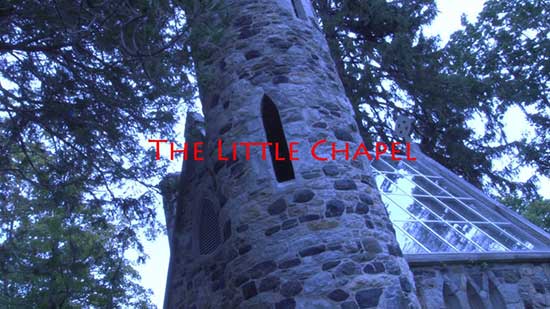 On the plus side I thought that the film looked good. It’s dark and bleak and the chapel itself if more than a little creepy (speaking of creepy, I loved that laugh at the end as it is creepy as hell and sure to freak some people out when they hear it). I also thought that it looked professionally shot and to be honest it looks a lot better than some bigger budgeted full-length horror films that I’ve seen of late. I suppose that the woman (Jessica Cinquemani) does a decent job as well though it is sort of hard to tell since we don’t hear her speak during the course of the film but her body language, gestures, and facial expressions are fine. I just wish that she’d had a little more to do in the film.

I thought that “The Little Chapel” was okay but it could have been a lot better. It isn’t bad but at the same time it just seems like there is something missing that could have made it quite awesome. Had it had sound and a little bit more explanation as to what exactly it is the woman in the film is trying to do it could have really been something special (but then again maybe I am overthinking it) Check it out if it sounds like something that you may be into as you may really dig it.