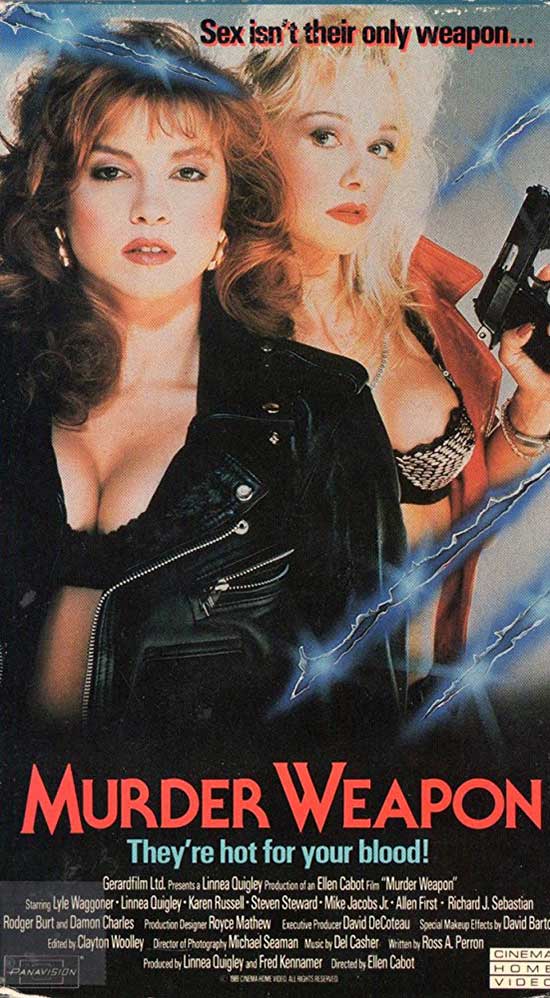 Two daughters of mobsters get out of the sanitarium after having killed a boyfriend in the shower, supposedly cured and on the right track. They hold a party and invite all their old boyfriends, making all of them think there is still hope for a relationship. Then the boyfriends start disappearing one by one.

The movie Murder Weapon centers on two friends, Dawn (Linnea Quigley) and Amy (Karen Russell) who were the daughters to some mob bosses. They had spent some time in an insane asylum after having slaughtered one of their boyfriends while he’s taking a shower. (Not much explanation is given to why they were committed instead of thrown into the slammer, but then, logic isn’t a high priority here). The movie proper begins after they just been released from the sanitarium, and they’re throwing a party to celebrate their freedom. They also invited some of their ex-boyfriends to join the fun, and shortly after the guys arrive someone starts slaughtering the party bros one by one.

Murder Weapon was directed by David DeCoteau and was also produced by and starred legendary scream queen Linnea Quigley. If you were someone in the 80s/90s and had a habit of watching schlocky flicks late at night, odds are you’ve run into the work of either person. Both were very prolific during that time frame, and it wasn’t uncommon to see them working together. A lot of their films tended to be fun little excursions into complete cheese. Murder Weapon is as equally entertaining as their other works, but mainly because it’s a terrible train wreck of a film. 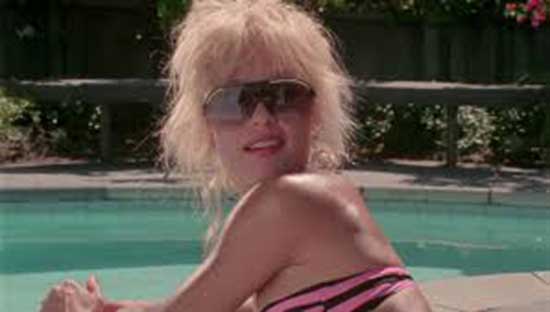 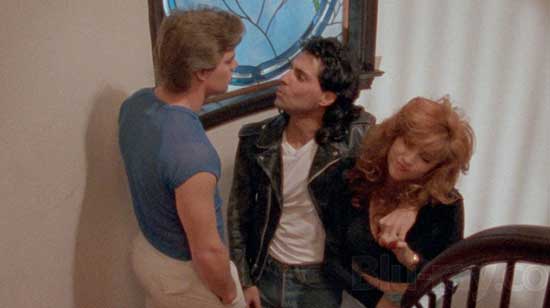 DeCoteau, as he was known for doing, directed the movie under the pseudonym Ellen Cabot. If I was him, I wouldn’t want my real name to be linked to the film either. For a man with his experience, the directing here seemed like it was made by someone who never been behind the camera before. As was pointed out to me by someone else when I was trying to collect my thoughts on the film, the editing was sometimes abrupt and almost harsh, the pacing was off, and the camerawork sometimes bordered on atrocious. I doubt anyone would ever accuse Decoteau being a great director, but he’s normally not this incompetent either.

Linnea Quigley own acting has never been award wining, and one can argue that the main reason why she got so many roles is that she was affordable and was normally willing to get naked. She at least can give a reasonably adequate performance in most of her efforts. Not so here. I don’t know what was with her this time around, but she was the very definition of the concept of “couldn’t act her way out of a paper bag.” This is even true during her sex scenes. I don’t know how, but she found a way to mess that up. It was amazing to see her fail at every possible level of acting here. Mirroring DeCoteau’s own contributions, it’s almost like she never made a film before. 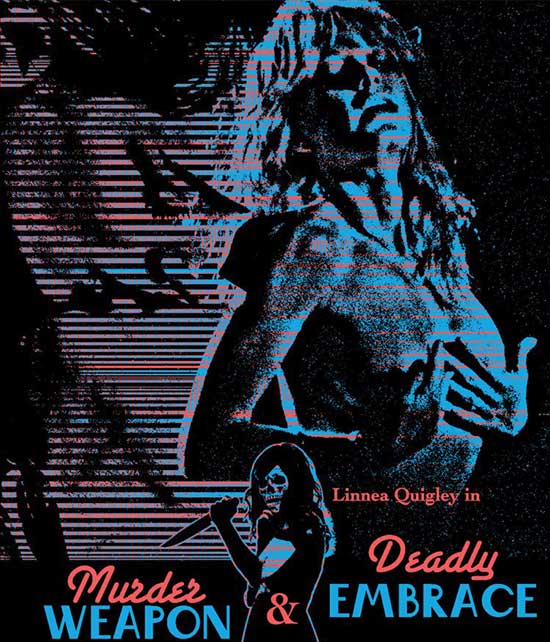 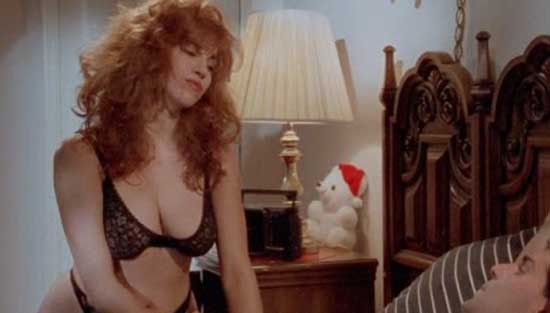 Don’t go looking for anyone to be much better, either. Karen Russell can’t act at all, and the only thing she seems to provide is another beautiful body to ogle. The rest of the cast seems to practically sleepwalk their way through the majority of the film, only showing any kind of spark when they have a love scene with one of the two actresses. Otherwise, they show about as much life as store mannequins.

The story itself doesn’t make a whole lot of sense. For instance, I’m not sure why a bunch of guys would accept invitations from their exes. Either they were really desperate, just wanted the ladies’s money, or they still had feelings for them. If it’s the last one, there should have been some kind of tension between the guys when they see that the other gents are there. Instead, they all seem to go with it. The fact that the women were in an insane asylum instead of prison was never adequately explained, and their way of getting released seemed rather convenient. Even the identity of the killer verges on the ridiculous, especially if you consider there’s no way the person involved has the physical strength to commit some of the murders that transpire onscreen. Murder Weapon is one of those films where you find yourself saying “Uh…what?” repeatedly during its run time. 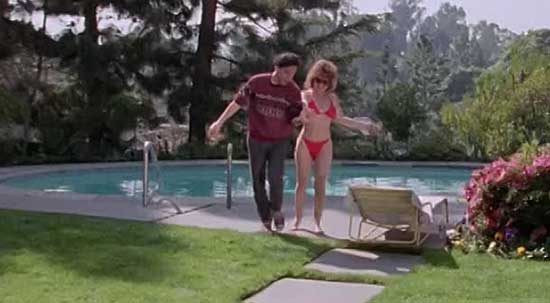 To give the movie some credit, it was interesting to see the stalk and slash formula turned around. Instead of the victims being a bunch of scantily clad women it was a bunch of party bros getting slaughtered. Some of the kills themselves were pretty interesting and fun. The special effects, however, weren’t always executed terribly well, which detracted from a couple of the scenes. 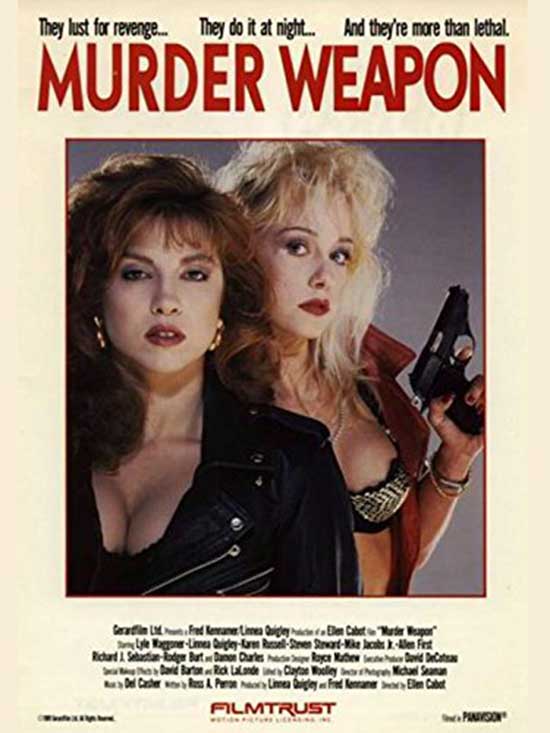 I said it before, but I’ll say it again, this movie is terrible. It manages to fail on multiple levels. The directing, acting, story, and special effects are all amateurishly done, which would have been more forgivable if this was something done by film-school students. Murder Weapon, however, is strangely compelling because of all the ways it is bad. It has some kind of strange synergy of awfulness that actually makes it fun to watch.