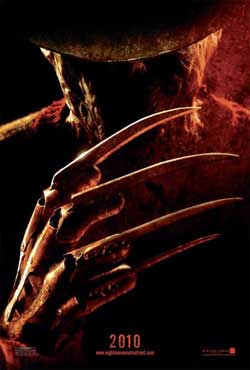 A re-imagining of the horror icon Freddy Krueger, a serial-killer who wields a glove with four blades embedded in the fingers and kills people in their dreams, resulting in their real death in reality.

I was ready to hate “A Nightmare On Elm Street”. I really was. How could a film of this pedigree be remade & be as potent & terrifying as the original? Especially with the demon known as Michael Bay producing it?

Well I have to say that while I wasn’t pleasantly surprised by it, I was surprised. Surprised that it played out as well as it did. First & foremost it was entertaining. The writers (Wesley Strick & Eric Heisserer) wisely played it close to the bone & really didn’t change too much of the original story. Some of the scenes are lifted cleanly off the original as a matter of fact. But the script held up fairly well which should give you an idea of how good the original was.

Now to the most important part of the movie (for me anyway). The casting. I still don’t understand why Robert Englund didn’t reprise the role of Freddie Krueger. Maybe he was offered it & turned it down, He isn’t getting any younger. But the role isn’t a particularly stunt filled one, and under all the makeup what could it hurt? He doesn’t even have a cameo in it as is the norm for all of these remakes as of late. But all that aside, Jackie Earle Haley is a great Freddie. He has the gravitas that I think the role needs to be effective. He fills out the sweater & Fedora admirably. My only quibble with his take on the part was his voice. I don’t know, maybe it’s me but he didn’t sound particularly menacing. He sounded like a normal voice actor trying to sound menacing by lowering his voice into a gutteral growl. I didn’t like the way he sounded & that leads to my next problem with the movie…..

That problem being Freddie talks way too much in the film. In the original I don’t think Freddie had more than 10 lines…maybe less. I gotta watch it again & count. But this Freddie practically filibusters to his victims before & after he kills em’. More menace & less talking would’ve made a big difference to the characters effect on the audience.

The other actors were perfectly adequate in their roles. Nothing more & nothing less than that. One difference between the kids in the original & the remake is that the kids have all graduated from High School this time out. I appreciated that rather than the usual approach of hiring 25 yr old actors to play 15-18 yr. olds. They looked older & I thought that was a nice touch. And one of my favorite actors, Clancy Brown plays a fairly major character although he isn’t in the film much. But when he is he out acts everyone around him with the ease of an old pro.

The makeup effects have to be addressed as well. We are all of course familiar with the original Freddy Krueger look…The burned skin, Red oozing sores, etc…etc. The original makeup was always tweaked from picture to picture but basically remained the same. In this movie the make up is far more realistic. Freddy is made up to look like an actual burn victim. If you’ve ever seen actual pictures of burn victims you’ll understand what I mean. Some of the skin on his face looks like bad skin grafts & some of it straight out burned black & bloody. It was effective, especially since you really don’t get a good look at it for a while.

The movie has the prerequisite Michael Bay “Jump as the music blasts” scenes in it & a few of them were mildly effective (to me). But the audience I saw it with jumped & shrieked far more than I thought was necessary. Which leads me to my next point…

The movie is not really scary. As I stated earlier the script hasn’t changed all that much from the original so a lot of the same scenes were used & those of us who had seen the original recognized them right away & while they’re better on a technical scale they’re not particularly scary. There isn’t all that much gore in the film either. When it comes it comes quickly & cut to the next scene. I was expecting a lot more gore, especially with the film being rated “R”. But what gore there is in the movie is effective.

I should mention that the screenwriters did put in a twist that turns out not to be a twist in the script. When I heard the first twist I thought to myself “That’s an interesting spin” & I thought they had something special going on. But then they “Reversed” the twist & I was upset that they didn’t follow up on what they started. “What’s The Twist” you ask? Dudes, Raw meat left in the sun spoils, I don’t. You’ll just have to see the movie for yourselves to see what I’m talking about.

And as to the ending of the film? Well like I just said, I’m not a spoiler. It would be very hard to match the way the original ended in it’s own spectacularly surprise ending so let’s just say that the door is left WIDE open for a sequel. But really in this age of sequels to sequels is that really surprising? I should add that the film looks great & Director Samuel Bayer keeps things moving along smoothly. If you’re not familiar with his work look up “Until It Sleeps” by Metallica or “Angels” by Robbie Williams on Youtube. He directed some great music videos in the past. I wish he would do more feature work.

All in all as I said in the beginning of this review, the movie surprised me because I didn’t hate it. It’s a quick 90 min. of mediocre scares. But I believe they could have done so much more with it to bring freddy to a new generation of budding gore lovers. It doesn’t do that & for that I’m saying that it’s worth seeing if you haven’t seen the original. If you have I would think before spending $12.00 or more because you’ve basically seen it already.