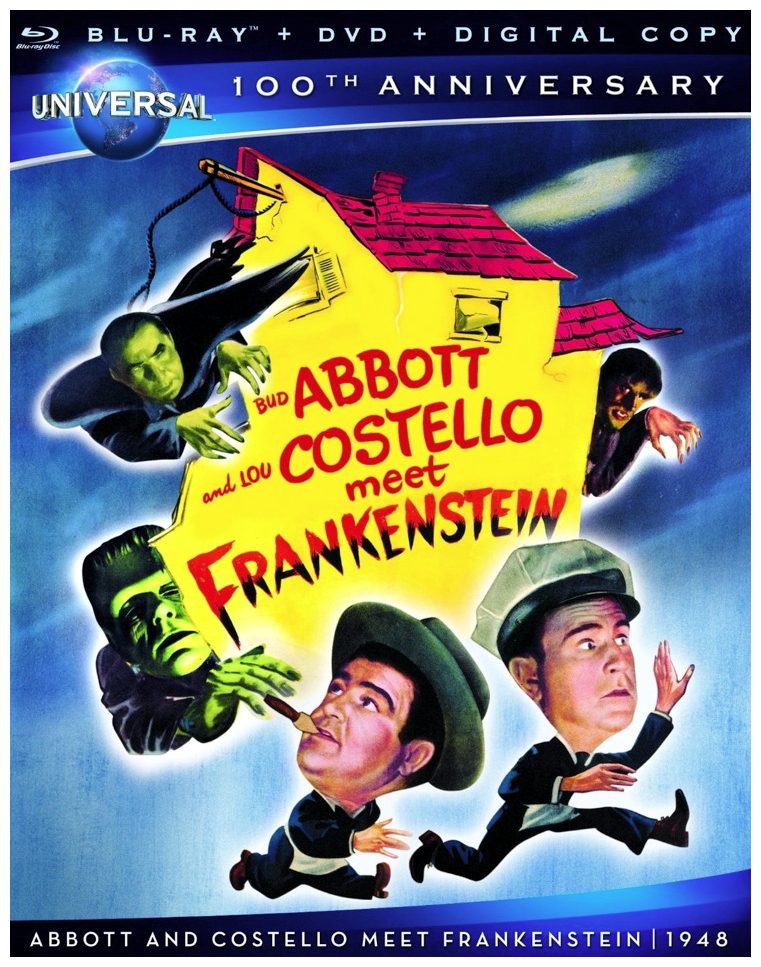 “The world of freight handlers Wilbur Grey and Chick Young is turned upside down when the remains of Frankenstein’s monster and Dracula arrive from Europe to be used in a house of horrors. Dracula awakens and escapes with the weakened monster, who he plans to re-energise with a new brain. Larry Talbot (the Wolf Man) arrives from London in an attempt to thwart Dracula. Dracula’s reluctant aide is the beautiful Doctor Sandra Mornay. Her reluctance is dispatched by Dracula’s bite. Dracula and Sandra abduct Wilbur for his brain and recharge the monster in preparation for the operation. Chick and Talbot attempt to find and free Wilbur, but when the full moon rises all hell breaks loose with the Wolf Man, Dracula, and Frankenstein all running rampant.” (courtesy IMDB)

In 1940, Universal Studios signed up a new comedy duo named Bud Abbott and Lou Costello for a musical called One Night In The Tropics (1940). They stole the show with several classic routines and their second film, Buck Privates (1941) was a huge hit, earning US$4 million and launching Abbott & Costello as superstars. All their early films drew big crowds and the duo were voted the third biggest box office attraction in the country. Unfortunately, a rift developed in 1945 and they refused to speak to each other except when performing. The following year they made Little Giant (1946) and The Time Of Their Lives (1946), both big flops primarily because they appeared as separate characters instead of a team. The rift was resolved when Abbott suggested naming Costello’s favourite charity for underprivileged children, the ‘Lou Costello Junior Youth Foundation’ and they reunited for Buck Privates Come Home (1947), The Wistful Widow Of Wagon Gap (1947) and The Noose Hangs High (1948). 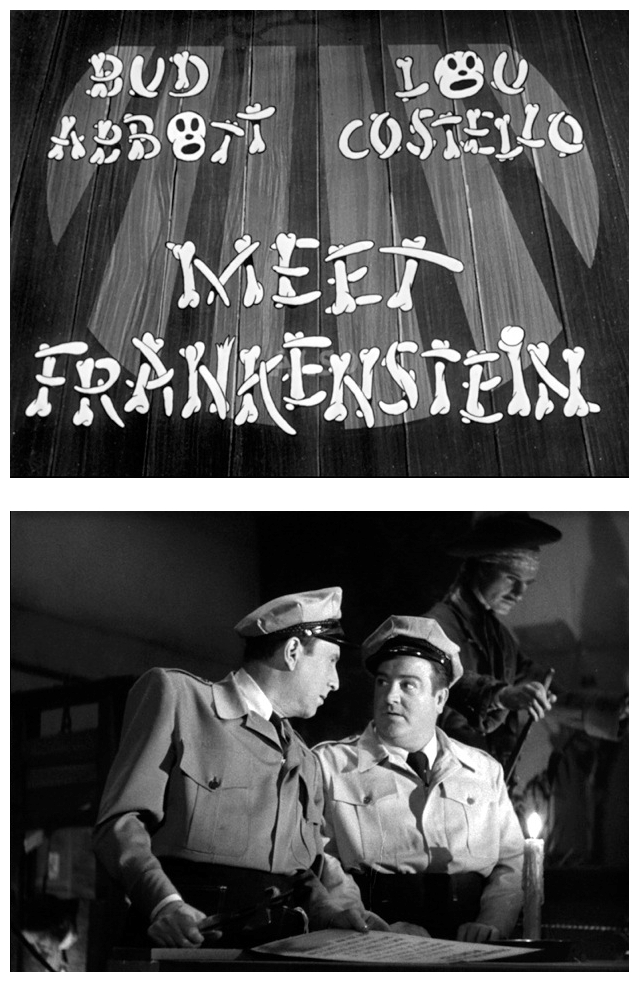 Meanwhile, over at Universal Studios, it was becoming obvious that audiences were bored with the classic monsters of yore. World War Two had provided the public with quite enough real horror through the pages of magazines, newspapers and, more importantly, on a weekly basis at their local cinemas as millions of feet of newsreels were unspooled showing first-hand the devastation of war. Out of the war emerged a double-threat villain – the Bomb and Communism – both of which would prove a fruitful source of fantasy film makers throughout the fifties. But in the closing years of the decade, Universal found one more way to squeeze just a little more cash out of their gallery of monsters – they would meet Abbott & Costello! Under Charles Barton‘s direction, Abbott & Costello Meet Frankenstein (1948) was to prove the best of a quickly deteriorating series. Bela Lugosi was back as Dracula, Lon Chaney Jr. as the Wolf Man and Glenn Strange as Frankenstein’s monster. 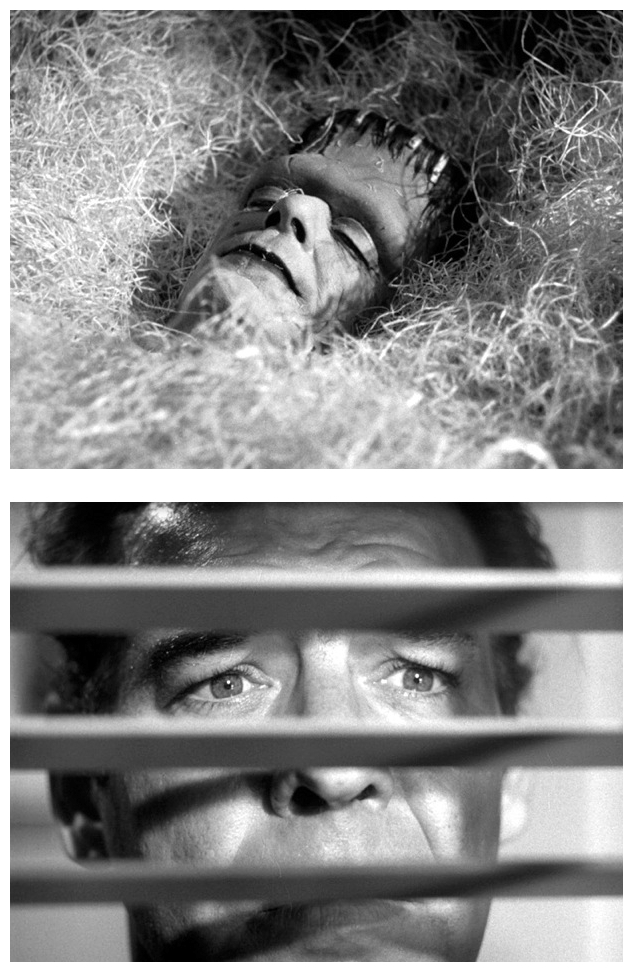 The plot hinges on the search for a new brain for the monster, and what better one to use than Lou Costello‘s? Where Abbott & Costello Meet Frankenstein succeeds is the treatment of its horror scenes, all played straight, with a high production standard attached to them. Sadly, this attitude was not adopted for the series of films that followed. In rapid succession the ex-vaudevillians met the Invisible Man, Jekyll and Hyde, the Killer, Boris Karloff and, in the worst of the lot, the Mummy. Abbott & Costello Meet Frankenstein started life as a script entitled The Brain Of Frankenstein which was changed during filming because it sounded too much like a straightforward horror movie, as well as to capitalise on the comedians’ marquee value. Costello hated the script at first, saying his five-year-old daughter could have written something better, but changed his mind once filming got under way. 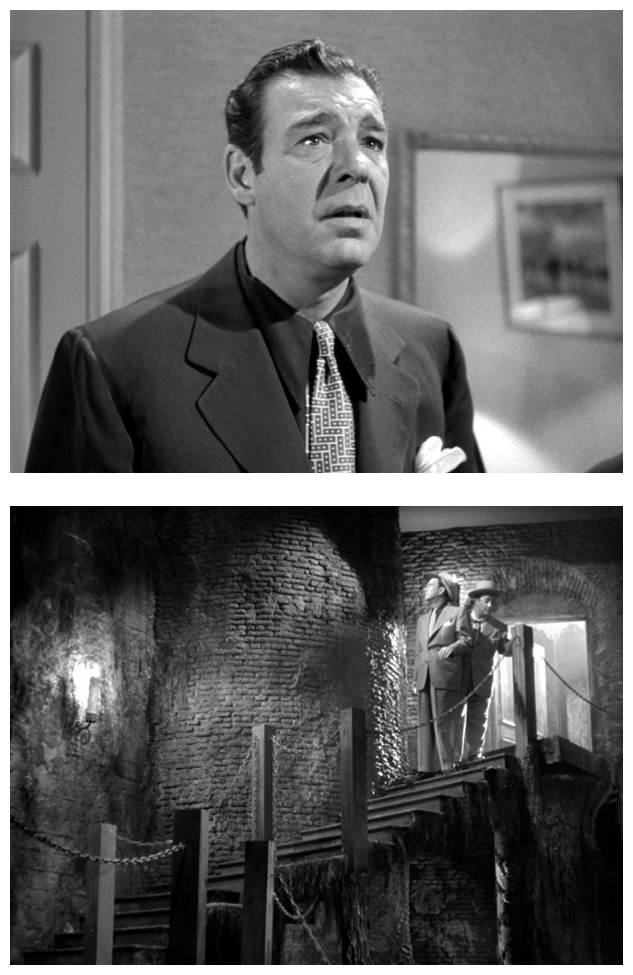 Chick Young (Bud Abbott) and Wilbur Grey (Lou Costello) are working as baggage handlers when Wilbur gets a call from Larry Talbot (Lon Chaney Jr.) who is in London and tells Wilbur of two large boxes bound for McDougal’s House Of Horrors. One contains the remains of Doctor Latos, better known as Dracula (Bela Lugosi), the other contains the hibernating Frankenstein monster (Glenn Strange). He tells Wilbur not to deliver the crates until he arrives but, before they finish their conversation, the moon rises transforming him into the Wolf Man and he tears up his own apartment. Wilbur hangs up the phone just as McDougal (Frank Ferguson) arrives to supervise the delivery of his crates. After delivering the boxes at McDougal’s house, Wilbur witnesses Dracula and the monster revive but, of course, Chick doesn’t, and McDougal has them arrested for theft. Meanwhile, Doctor Sandra Mornay (Lenore Aubert) invites Dracula to her castle home on a nearby island, and insists that she has found the perfect replacement for the monster’s brain: Wilbur’s. 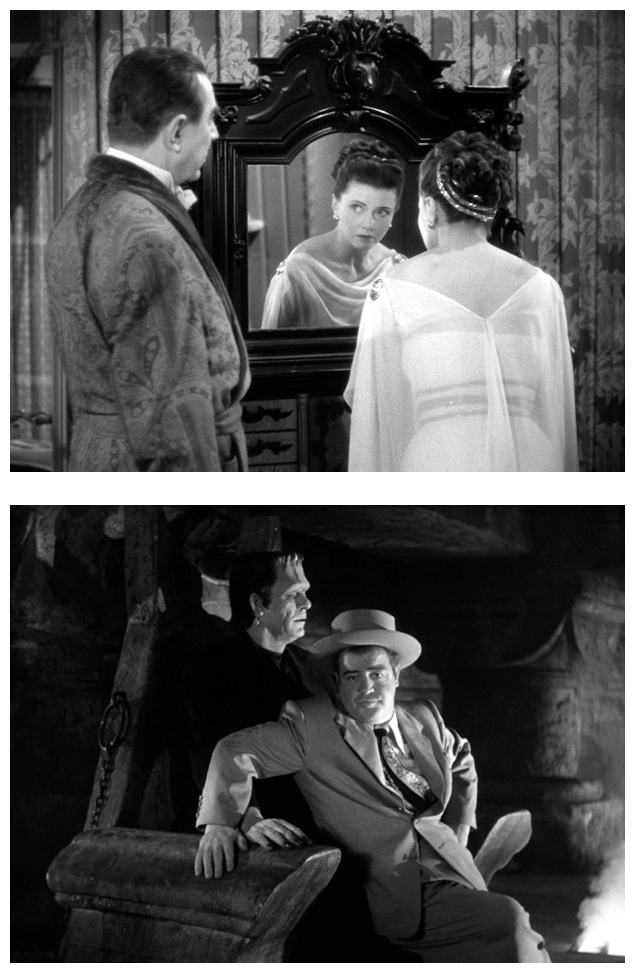 Some smug critics refer to this title as an indicator as to just how low both Universal’s top comedy team and its famous monsters had sunk by 1948, but they’re wrong on both counts. Most Abbott & Costello fans consider this the duo’s finest film, their interplay is particularly sharp, and their routines are strikingly funny (like when the not-so-innocent Costello arranges a double-date with Abbott in which he gets both women). In one of the few movies to deftly combine horror and comedy, the monsters are treated with respect and affection, a far cry from the lampooning they’d be subjected to in future years. Horror fans should appreciate the nifty special effects and makeup, and find the monsters appropriately frightening. One great visual during the climax has the Wolf Man and Dracula fight to the death and, just as Dracula turns himself into a bat (animated bats courtesy of Woody Woodpecker creator Walter Lantz), the Wolf Man grabs him and jumps out a high window into a raging rocky river. 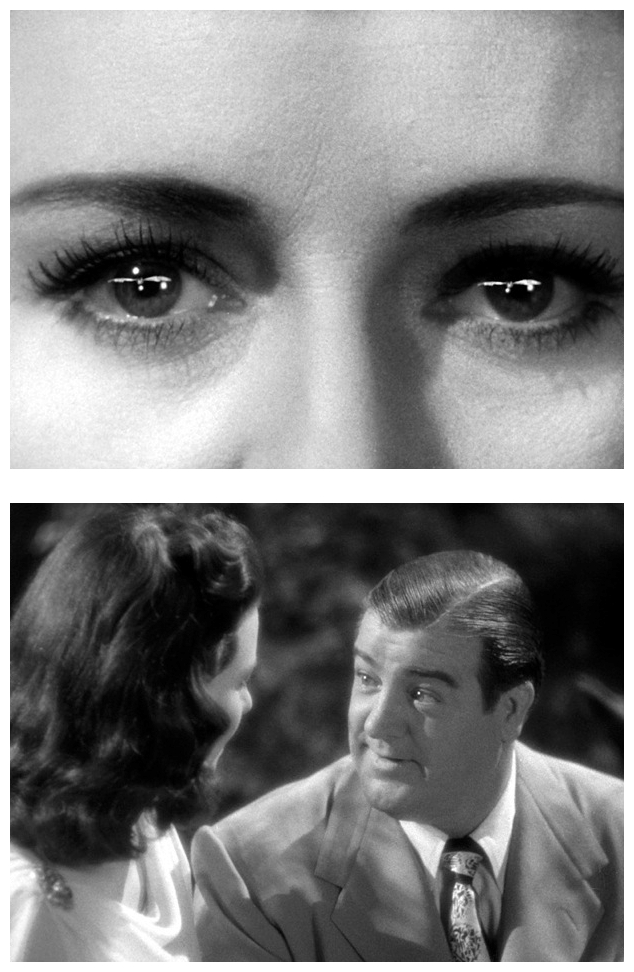 The monster pursues Chick and Wilbur on to a pier and the pair jump into a boat. Joan sets fire to the pier which attracts the monster who walks into it and burns to death. Wilbur scolds Chick for not believing him, and Chick sadly states that now that all the monsters are dead, “There’s nobody to scare us anymore.” They suddenly see a cigarette floating in the air and hear a disembodied voice (Vincent Price uncredited): “Oh, that’s too bad, I was hoping to get in on the excitement. Allow me to introduce myself, I’m the invisible man.” The boys jump out of the boat and swim away while the voice laughs maniacally. Capably directed by Charles Barton, responsible for many other Abbott & Costello hits, comedy highlights include the scene in which Costello speaks to Chaney over the phone just when he transforms into a growling werewolf, and the scene in which Costello is unknowingly sitting on the lap of Frankenstein’s monster required multiple takes due to Costello improvising wildly, which caused Strange to constantly break up laughing during takes. 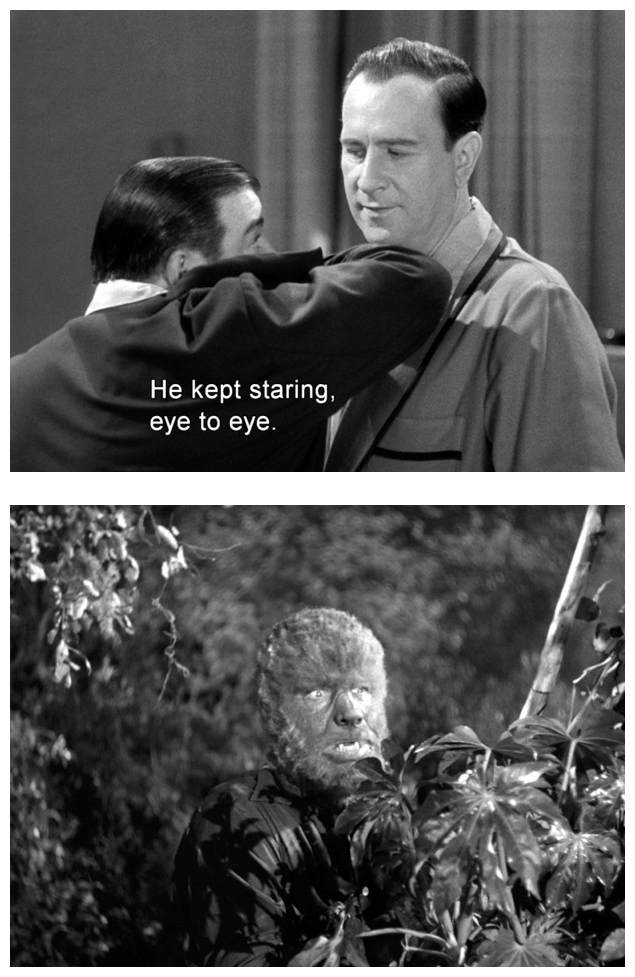 For only the second (and final) time in his career Lugosi played Dracula on screen, in a performance that was amazingly layered – both menacing and humorous. His scenes with Costello were incredible, as when Dracula strokes the nitwit’s ego so he can implant his simple brain into the body of the monster: “What we need today is young blood…and brains!” While the comedy is deft and precisely timed, the studio made sure not to mock the monsters themselves. Already seen as remnants of a bygone era (just seventeen short years after the the original Dracula and Frankenstein were released in 1931), Universal still treated them with the respect they deserved. For one last time, the classic monsters got to bask in the applause of appreciative audiences. Furthermore, this was the final Universal film to feature their holy trinity of Frankenstein’s Monster, Dracula and the Wolf Man until Stephen Sommers‘ misconceived mess Van Helsing (2004), but that’s another story for another time. Right now I’ll ask you to please join me next week when I have another opportunity to make your stomach turn and your flesh crawl with another lusting, slashing, ripping flesh-hungry, blood-mad massacre from the back side of…Horror News! Toodles! 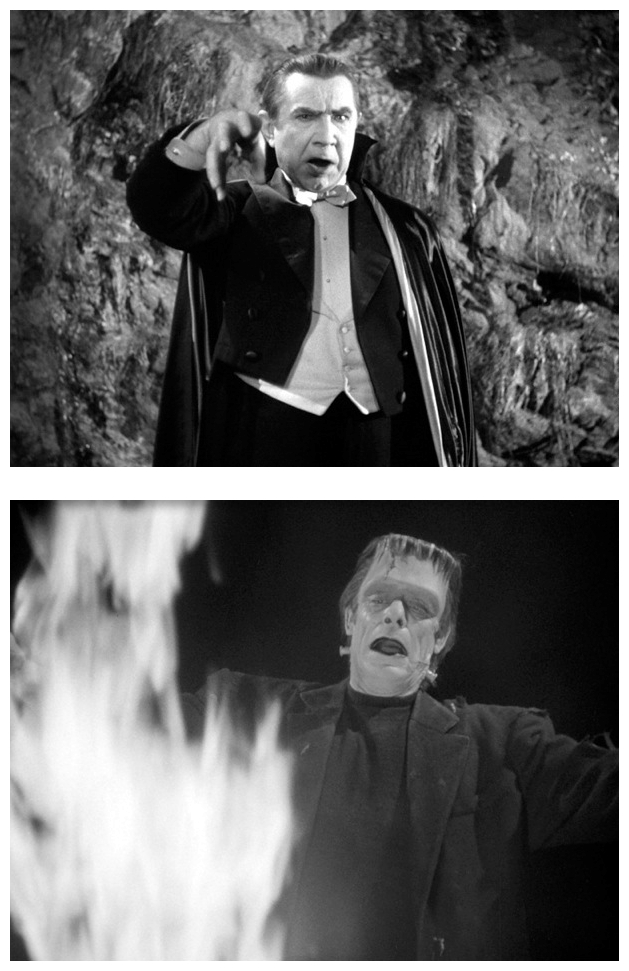