The cast and crew of a horror film encounter the vengeful spirit of a cursed demon.

As I’m sure you’ve heard by now, the big news coming out of Unearthed Films is the return of the exorcism film with the upcoming release of American Guinea Pig: Song of Solomon. As if to whet our appetites while we wait, just a few weeks ago Biro and crew dropped another possession/exorcism film, this one coming to us from Italy, called Lilith’s Hell. Serving as Vincenzo Petrarolo’s directorial debut, this found footage thriller approaches things a bit differently than the audience might be used to when it comes to stories about demonic possession. It is this new angle that ultimately saves the film from becoming just another found footage disaster.

Marco (played by director Petrarolo) and Ryan (Marcus J. Cotterell) are planning on making a found footage-style horror movie about a maniac who attacks a party, traps the people in the house, and then records them with various cameras, intentionally pushing them toward cannibalism.

They recruit Alberto (Federico Palmieri, from Hope Lost) to run the cameras, and Marco gets them into his grandmother’s place, which he’s “borrowed” for the shoot. They all arrive at the house to set up a couple days before the shooting begins, but then actress Michelle (Manuela Stanciu) and her makeup assistant, Sara (Joelle Rigollet), arrive early as well, so the whole crew decides to try and make the best of it. That’s when the noises start, and strange things start happening, and when people start dying, the fleeing survivors find a strange room littered with dead bodies and a video camera that recorded how it all happened.

Lilith’s Hell was written by Davide Chiara, and it’s in his writing that the story shines. The premise is interesting and allows the found footage approach to the film work. The fact that he brought the idea of “Lilith” into the story, as in the symbol of feminism, the original wife of the biblical Adam before Eve was “created,” is a huge positive for the film: this is territory that hasn’t (to my knowledge) been tread before when it comes to possession-based films. Because of this unique angle, the audience is not able to start making assumptions based on their previous knowledge of exorcism films, which in turn keeps the suspense and tension dialed up through the finale.

The Sara character is a bit brooding, kind of gothic in style and attitude, and is able to give the others (and the audience) a bit of explanation as to who Lilith is, but doesn’t come off as unexplainably brilliant on an obscure topic that she wouldn’t seem to know about. All of these successes are thanks to a well-written script.

On the other hand, there are other aspects of Lilith’s Hell that fall a bit short. Much like Atroz (which I can’t say enough good things about), Lilith’s Hell is another “Ruggero Deodato presents…” film, but this one also finds Deodato (director of Cannibal Holocaust) in front of the camera. This time he plays himself, and he explains at the beginning of the film that he was asked to help out a couple of young filmmakers (Marco and Ryan, obviously). He shows up again only at the end, when he discovers the aftermath of what we’ve just seen happen. This wraparound feels unnecessary, but at the same time this minor mistake is forgivable; can’t blame a first-time director for being excited to have an Italian filmmaking legend in his film.

Unfortunately, there are other problems that are not so easy to look past. A lot of the violence and potential gore is obstructed from the audience’s view, and whether this is for effect or because of lack of budget for effects, this is a film that would benefit from putting the blood on screen. There’s an even bigger problem than that: there are unlikable characters in films, and then there’s Ryan, the new king of annoying.

Perhaps his arrogant attitude is intentional, that’s fine, but Cotterell’s overacting makes things tough. From his obnoxious delivery of lines and his exaggerated gestures, to his constant looking at the camera, his performance is almost enough to take the audience out of the story. This is a found footage film, which means Cotterell needs to be acting not like a character, but like a real person, and it’s hard to believe that Ryan is a real person.

I hate to condemn any film, especially one that involves Deodato and is coming from Unearthed Films, one of my favorite purveyors of extreme horror. But I guess now you know I am, indeed, objective. Lilith’s Hell is not all bad by any means. There’s a great, creepy opening credit sequence, and the set is well-made, from the fancier rooms of the lavish house to the Satanic/demonic imagery all over the walls in the hidden part of the basement.

Like I said, I think the story is fresh enough to overshadow the bad acting of a single character, and there’s some fun stuff toward the final act when it gets into potential exorcism rites and all hell (literally) attempts to break loose. This film is certainly not one to completely write off, so if you’re an exorcism fan, or just a fan of Unearthed releases, by all means give this film a chance. 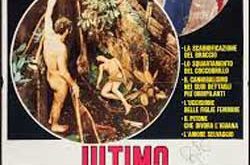