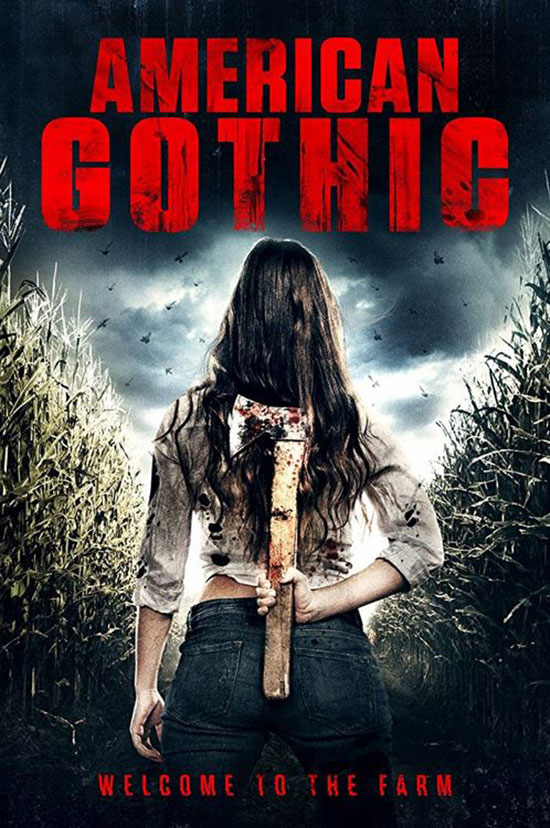 A quiet couple. An isolated farmhouse. A pair of desperate fugitives. Everything breaks under pressure.

A prison bus carrying inmates has an accident and everyone is killed, with the exception of prisoners Nick (Slate Holmgren) and Guy (Mark Barthmaier), who see this as their opportunity to escape. I found it hard to believe that everyone else on the bus died in the accident, except for two prisoners and Nick and Guy didn’t seem like they were injured at all, but I’ll get to that later.

They do manage to escape, and despite the fact that they are chained together at the ankles which makes running difficult, they limp through the woods until they come to an isolated farmhouse. They immediately break into a barn and begin looking for any kind of tool that could help them remove their chains. When they find the perfect tool, it has a chain and lock on it that requires a key. Who puts a lock on their bolt cutters and why? 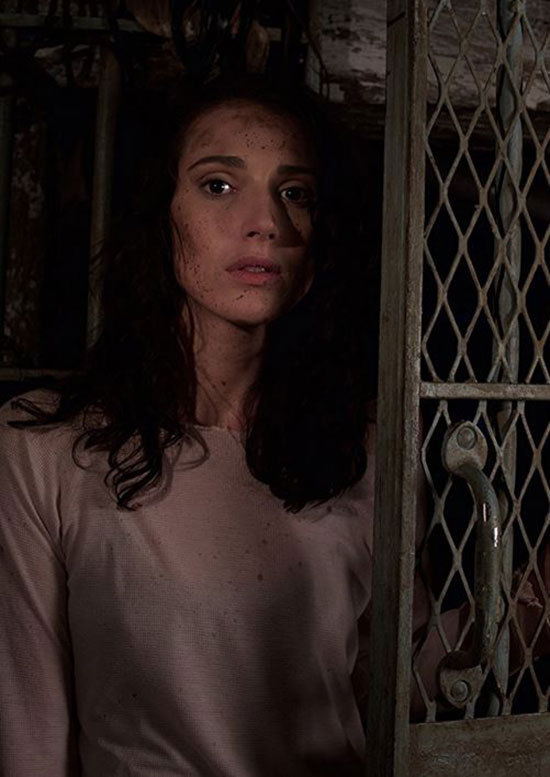 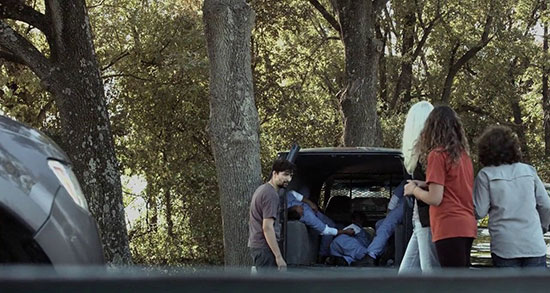 Unable to cut off their chains, Nick and Guy hobble to the farmhouse hoping they can find the key to the bolt cutters. They realize one of the owners Sarah (Rochelle Bostrom) is home, but don’t know that her husband Bill (Ned Luke) is in the basement doing work. They try to force their way into the farmhouse, and even though Bill comes up from the basement and tries to intervene, they manage to get inside and demand that the couple hand over the key so they can unlock the bolt cutters. Overall the actors in this film are casual participants, with the exception of Slate Holmgren, who gives a strong performance as Nick.

American Gothic is a fictional story, but several aspects of the plot push the boundaries of belief and this is problematic. Once Nick and Guy are no longer chained together they quickly realize that Sarah and Bill are not as harmless as they appear, and the couple has plans to subject the escaped prisoners to a different type of incarceration. Sarah and Bill force Nick and Guy down into the basement, where they discover the couple has been holding a young woman hostage in a makeshift cage. It becomes clear to the prisoners that Bill and Sarah intend to hold them all there until they kill them. Far too much time in this film is spent on what seems like a never ending game of cat and mouse between the captors and captives. Nick and Guy escape and Bill and Sarah chase them throughout the farmhouse and the whole sequence is repeated several times. In the process the prisoners find out that the young woman’s name is Katrina (Susannah Hart Jones) and she tells them an outrageous story about how she ended up in the basement. Her story only gets wilder and more unbelievable as the movie progresses. 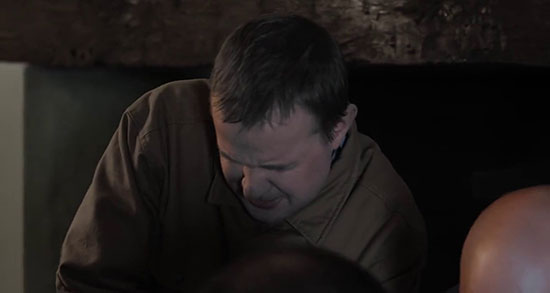 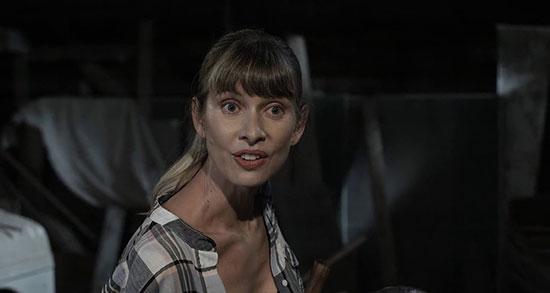 Once the police become aware of the prison bus crash and the fact that two prisoners have escaped, a police officer (Dina Engel) pays a visit to the farmhouse to alert the owners and to search the grounds. The involvement of the police eventually leads to the revelation that Bill and Sarah are not who they claim to be and also the real reason they are attempting to hold Nick, Guy and Katrina against their will. 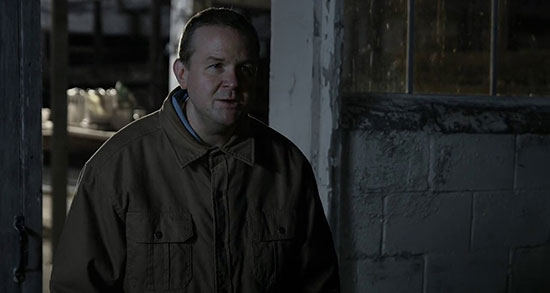 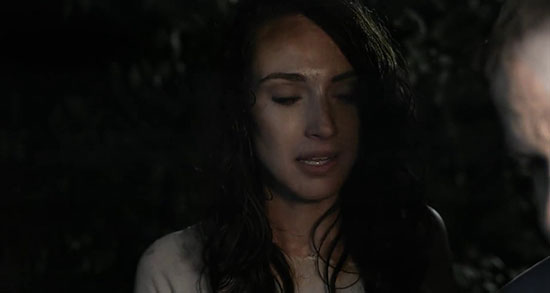 I thought exposing the truth about Bill and Sarah, including the fact that they intentionally caused the prison bus to crash, would improve on the plot being full of holes, but that wasn’t the case. Unfortunately, the story became even more convoluted when the actual motive was explained and Katrina’s identity was finally unmasked. 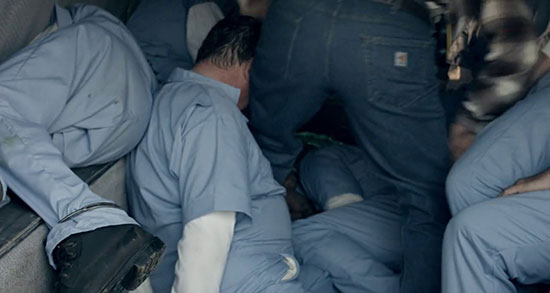 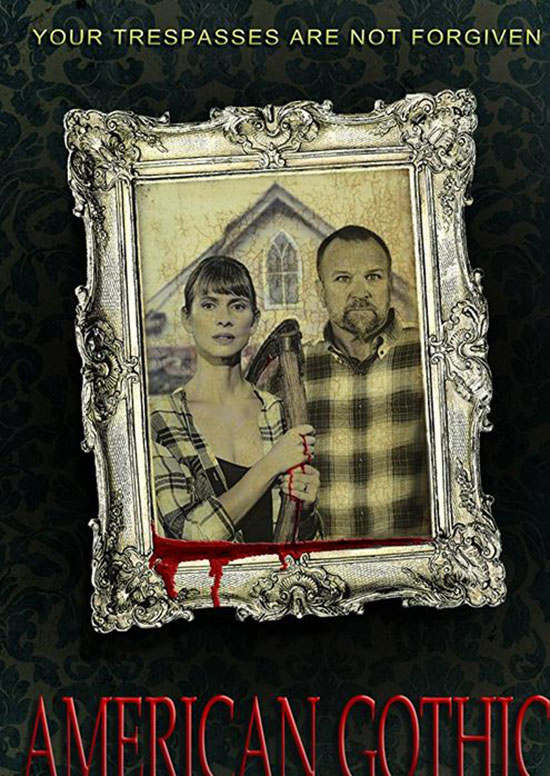 Once the real identities of the characters are divulged, several times in fact, there are still a lot of questions, and by the time the movie was over I had lost interest in finding out the answers. This movie definitely suffered due to the plot twists instead of having them work in it’s favor.