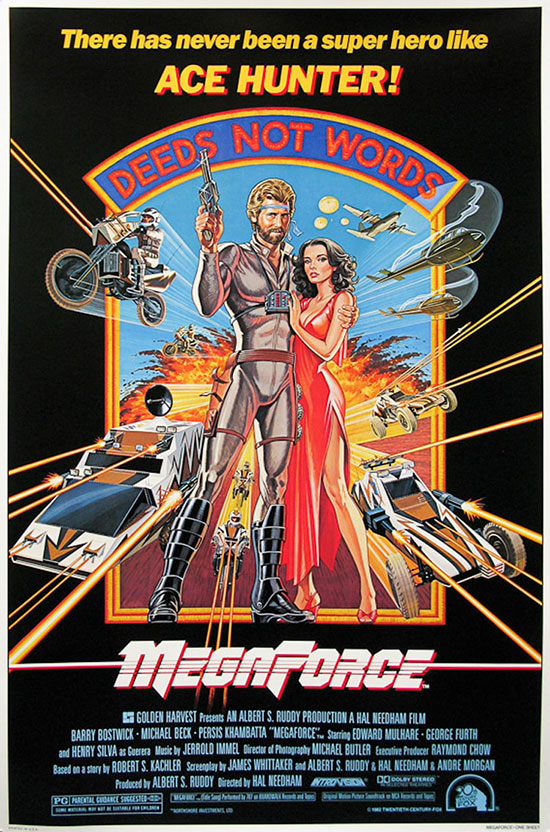 Story about a rapid deployment defense unit that is called into action whenever freedom is threatened.

Ever watch a movie and think to yourself “Man, if I was 6 years old, this movie would be awesome! As an adult… not so much”. Megaforce is one of those movies where had I been younger when I watched it, it would have been great. I actually realized, while watching, that I had seen it when I was around 10 or 11 years old. It hadn’t exactly rocked my world then either.

Megaforce centers on the conflict between two nations. One is the peaceful Sardun, and the other is the neighboring nation of Gamibia. While both nations sound like the names of warring planets in a schlocky space opera, there’s actually located in some undisclosed continent here on Earth. Gamibia has been particularly naughty lately, Sardun sends one of their generals, along with a major in their army, to enlist the help of Megaforce. 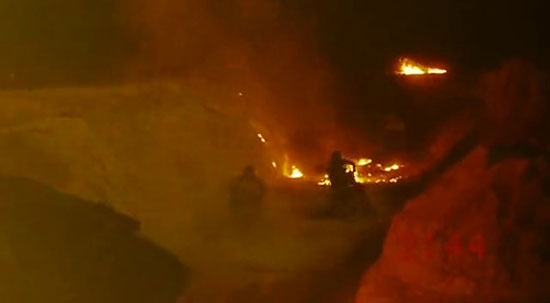 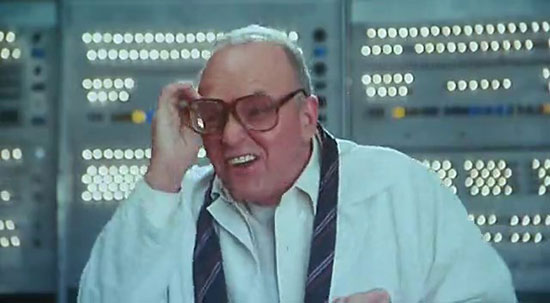 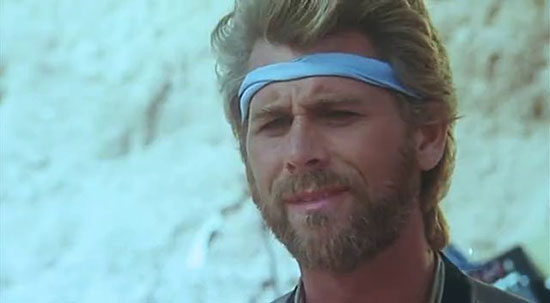 Megaforce is a multinational army secret army that uses advanced weapons, vehicles, and other gadgets. The leader of MegaForce, Commander Ace Hunter (yes, groaning at his name is allowed and encouraged), comes up with a plan to help Sardun’s military have a decisive victory over Gamibia. Things don’t quite go as planned, and before Hunter can sing “Let’s Do The Timewarp Again” his team is stuck behind enemy lines with and squad of tanks between Megaforce and their only hope of escape.

Ever watch the old G.I. Joe cartoons from the ‘80s and think to yourself “Gee, I wish someone would turn that into a live-action movie, but make it dumber with a shoestring budget”? If so, then have we have the film for you. MegaForce has stealth motorcycles, holographic technology, lasers, and land based vehicles that are suddenly capable of flight when the plot calls for it. It really is like a cartoon from the 1980s.

However, our elite fighting force’s equipment and weaponry really didn’t look so advanced. They looked like what they were: motorcycles, dune buggies, and regular weapons poorly dressed up in a vain attempt to make them look more science fiction-y. The outfits the members of MegaForce were sand colored spandex suits that I assume was meant to give you the impression that they were more than just an ordinary strike team. Instead, the outfits made them look like they were refugees from an ‘80s jazzercising video. 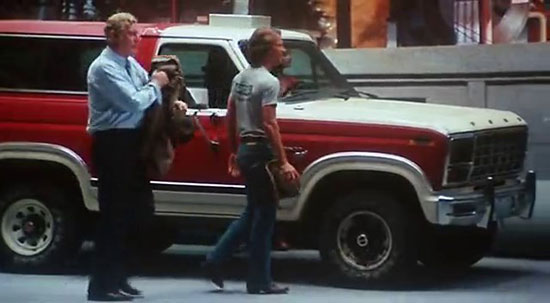 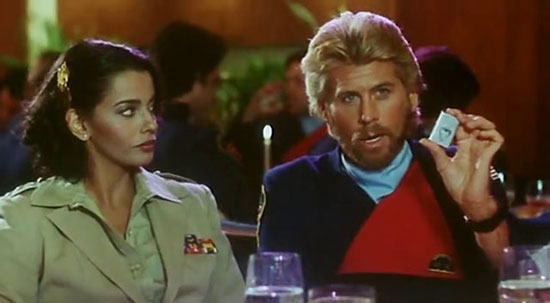 The dialogue is clunky and sometimes downright silly, as if the writer wasn’t familiar with how most people normally talk. There’s not much in the way of character development or growth. The special effects, not surprisingly, are of the cheapest variety. There are times when it’s so obvious that the actors are just spliced in front of a background image that any suspension of disbelief is stretched past its breaking point. The few action scenes there are, while having some decent stunt work weren’t all that exciting with the exception being the movie’s climax.

The acting from the most part, was decent. The main actors do the best they can with the material they’re given. It was nice seeing Persis Khambatta, better known for her role in Star Trek: The Motion Picture, but she’s not given much to do to really justify her presence in the film. Henry Silva, a long time character actor who’s made a career out of playing villains, was the main antagonist. However, his character never really does anything to make him seem truly evil or unbeatable. Silva was kind of wasted in the role. Barry Bostwick played the main protagonist, Ace Hunter. He added a kind of Errol Flynn swashbuckler persona to the role, which itself was fun. While Bostwick is a fine actor, he really didn’t do much to really sell himself as a viable action hero. Of course, his outfit, headband, and hair just made him look kind of goofy. He’s also get these ridiculous expressions on his face that just ruined his credibility. Actually, he made me wonder if a good portion of the movie’s budget was spent on illegal substances. 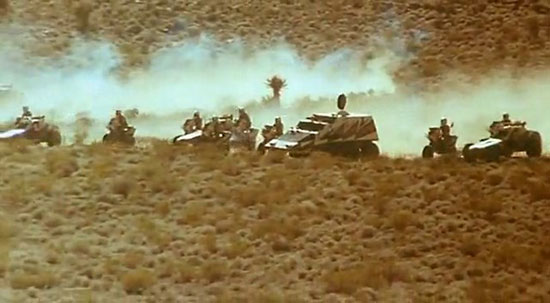 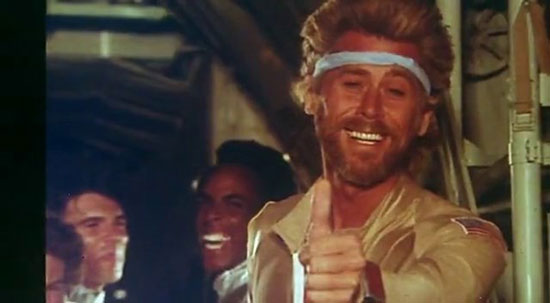 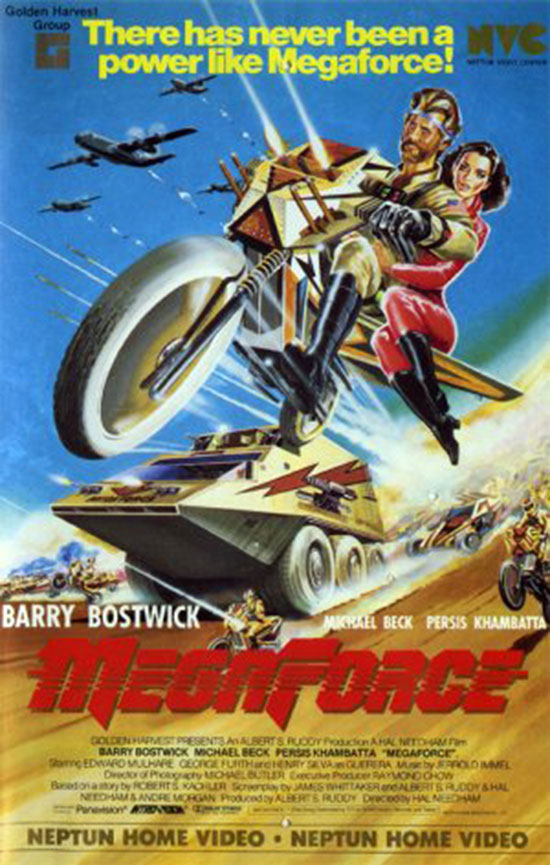 With that said, this movie is one of the cheesiest 80s films I have ever seen. It’s ridiculous, but in all the right ways. I should have hated the movie, since the it had so much bad going into it. However, the overall concept, the dialogue, the films final battle, and Barry Bostwick occasionally breaking out a goofy expression, just made it hard to really hate the movie. If you want to watch something that’s a glorious trainwreck of over the top schlockfest that could have only been made in the 1980s, then give it a look.