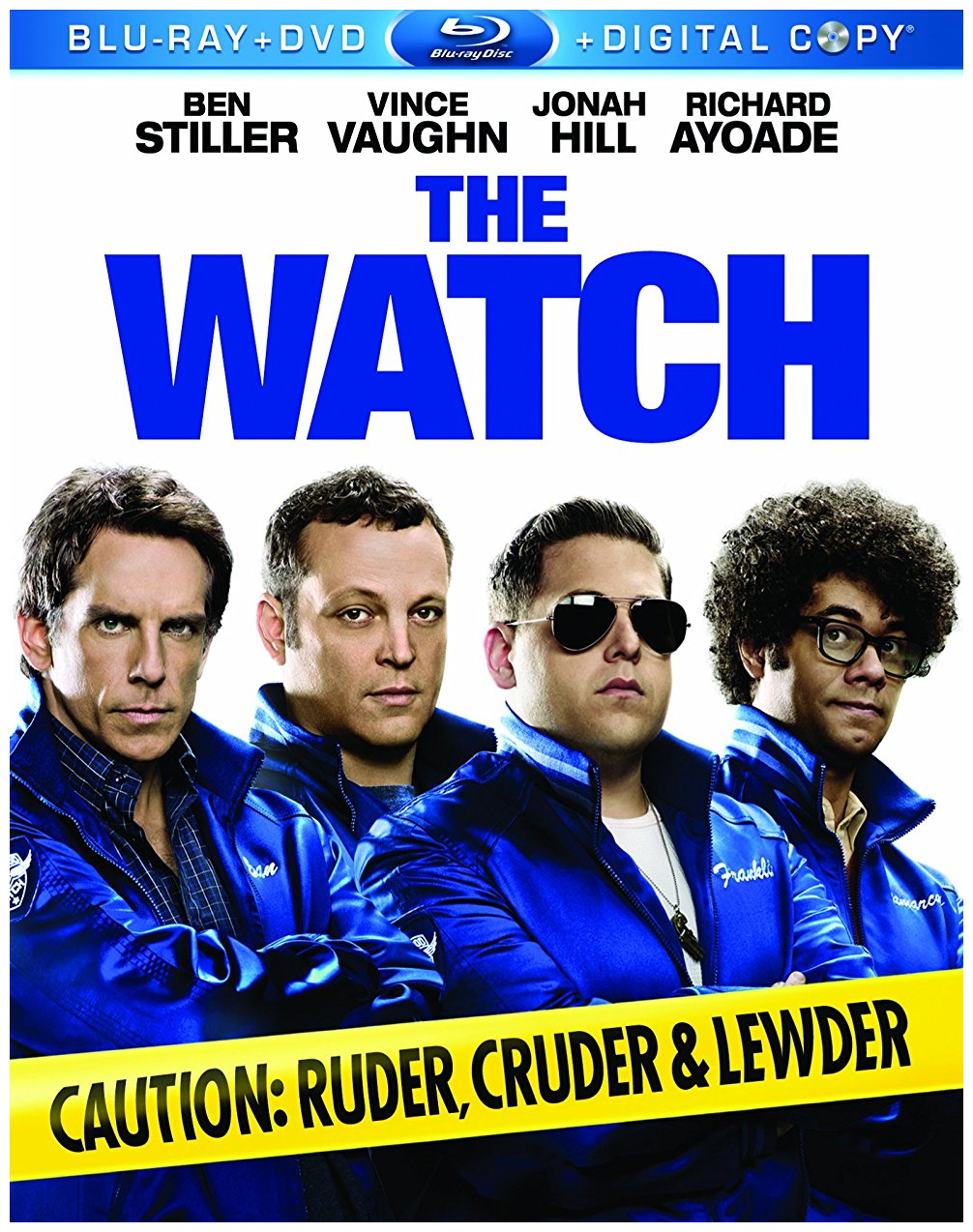 “In Glenview, Ohio, Evan is the manager of the Costco department store and married to Abby. When the Costco night watchman, Antonio Guzman, is mysteriously murdered, Evan organises the Neighbourhood Watch, a watch team with his suburban neighbours Bob, Franklin and Jamarcus to protect the neighbourhood and find the killer of Antonio. Soon they discover that the murderer is an alien that is preparing to invade Earth, and they become the last hope of mankind on Earth.” (courtesy IMDB)

‘Guy humour’ is its own animal. It revolves around the idea that men fully understand there are some things they should never confess to their wives, they think about sex with goldfish-type regularity, and believe they should be the protectors of the womenfolk and younglings. Put this mix in the blender with a couple of humorous writers, some established as well as new comedic talents, and you get a funny adult film about an alien invasion in the suburbs. Hollywood producer Shawn Levy had been developing an idea since 2008 entitled Neighbourhood Watch which he pitched as a Ghostbusters (1984) kind of idea for younger audiences. Levy hired Jared Stern to write the screenplay and started negotiations with director David Dobkin and actor Will Ferrell. 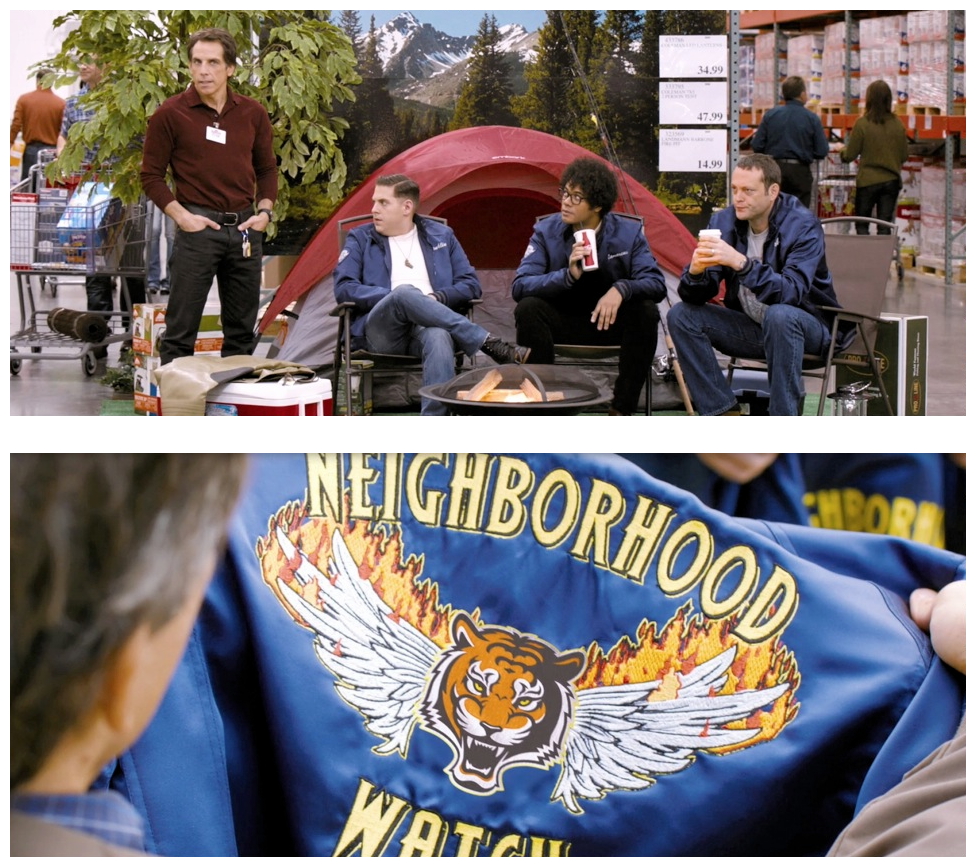 When these negotiations fell through, Seth Rogen and Evan Goldberg were brought in to rewrite the script as a more adult-oriented film, and Saturday Night Live alumnus Akiva Schaffer – director of the hilarious Hot Rod (2007) – was hired to helm the project, which was retitled simply as The Watch (2012). Now, if you know the writers of Superbad (2007), Pineapple Express (2008), This Is The End (2013), The Interview (2014) – and the players include seasoned comedy actors Ben Stiller and Vince Vaughn with relative newcomers Jonah Hill and Richard Ayoade are involved, you can assume you’re in for a buddy movie that should hit the spot for any guy over the age of thirteen. This ridiculously silly send-up of Invasion Of The Body Snatchers (1956) casts Stiller as Evan Trautwig, an uptight Ohio Costco manager whose store’s security guard is killed under mysterious circumstances. 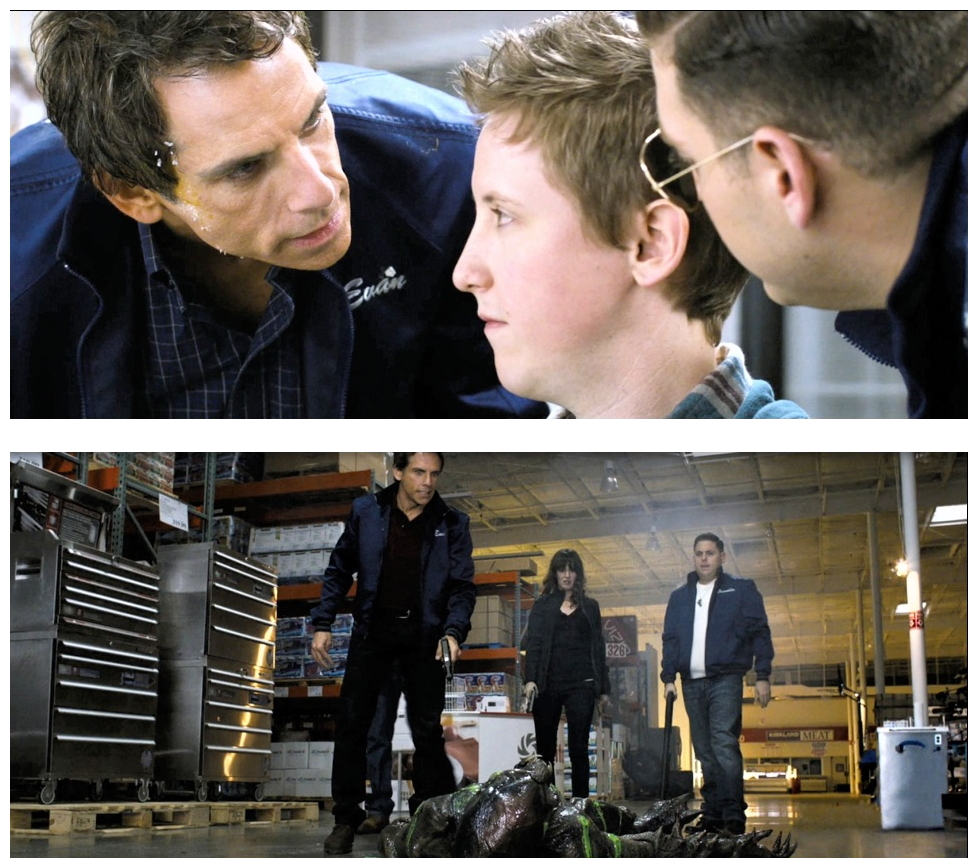 Evan’s response? He rounds up a group of three other volunteers to form a neighbourhood watch: Overprotective father Bob (Vince Vaughn) is obsessed by what his teenaged daughter’s date might be doing with her; Franklin (Jonah Hill) is a ‘mummy’s boy’ survivalist with an arsenal under his bed; and British import Jamarcus (Richard Ayoade) thinks that joining the group will somehow improve his love life. The guys rapidly discover the joys of hanging out in Bob’s man-cave and sinking beers instead of conducting stakeouts. When Evan does manage to bully them out on the road patrolling they have an accident and find they have stumbled across an alien invasion – but who’s going to believe them? In a move of exceptional and misplaced self-confidence, they decide to take on the intruders themselves. 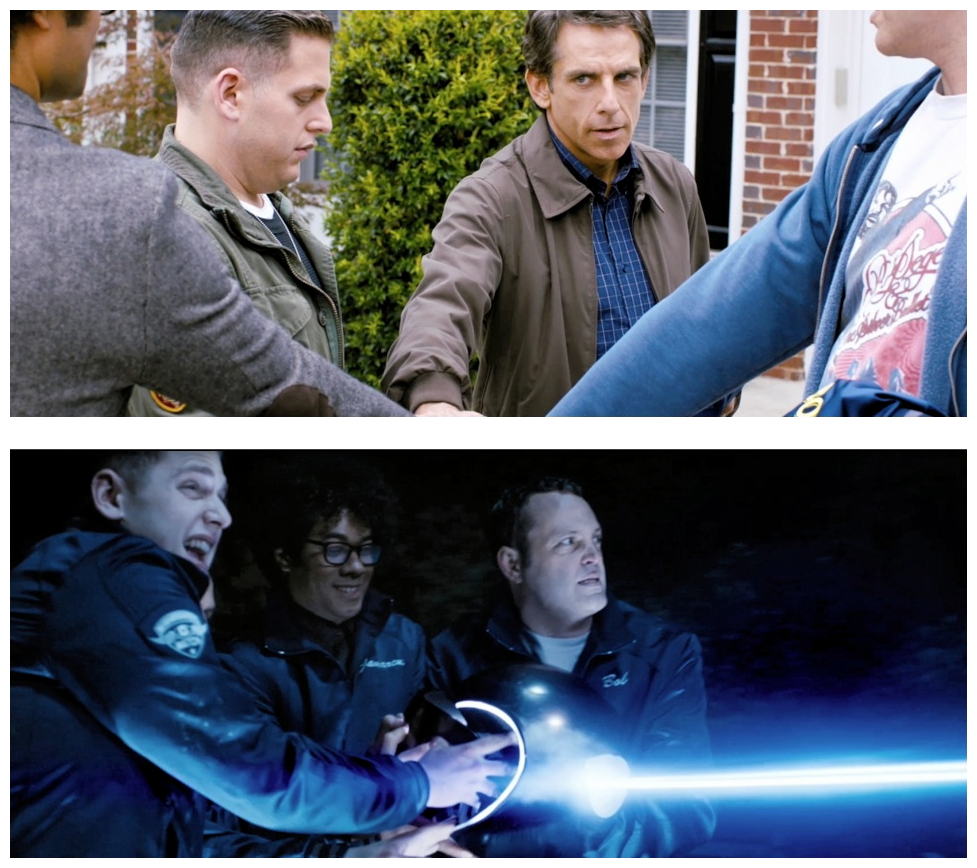 This all sounds extremely promising but the end result is all below par, even for your average ‘Guy’ movie, and is ultimately disposable and forgettable. (Variety: “Lowbrow, lame-brained mash-up of buddies-on-patrol comedy and sci-fi actioner, held together -barely- by an endless string of penis jokes.”) The lead actors are in their element, although Richard Ayoade brings an unpredictable element to the group dynamic and deserves to be in a better film, while the supporting cast, in particular Erin Moriarty as Vaughn’s teenaged daughter and Rosemarie DeWitt as Stiller’s wife, make you want to like the movie even more. (Rotten Tomatoes: “The Watch uneasily mixes sci-fi elements with gross-out gags and strands its talented cast with a script that favours vulgarity over wit at nearly every turn.”) The plot moves at a decent pace and there are some individual funny moments in which the cast improvise but things go pear-shaped during transitions. 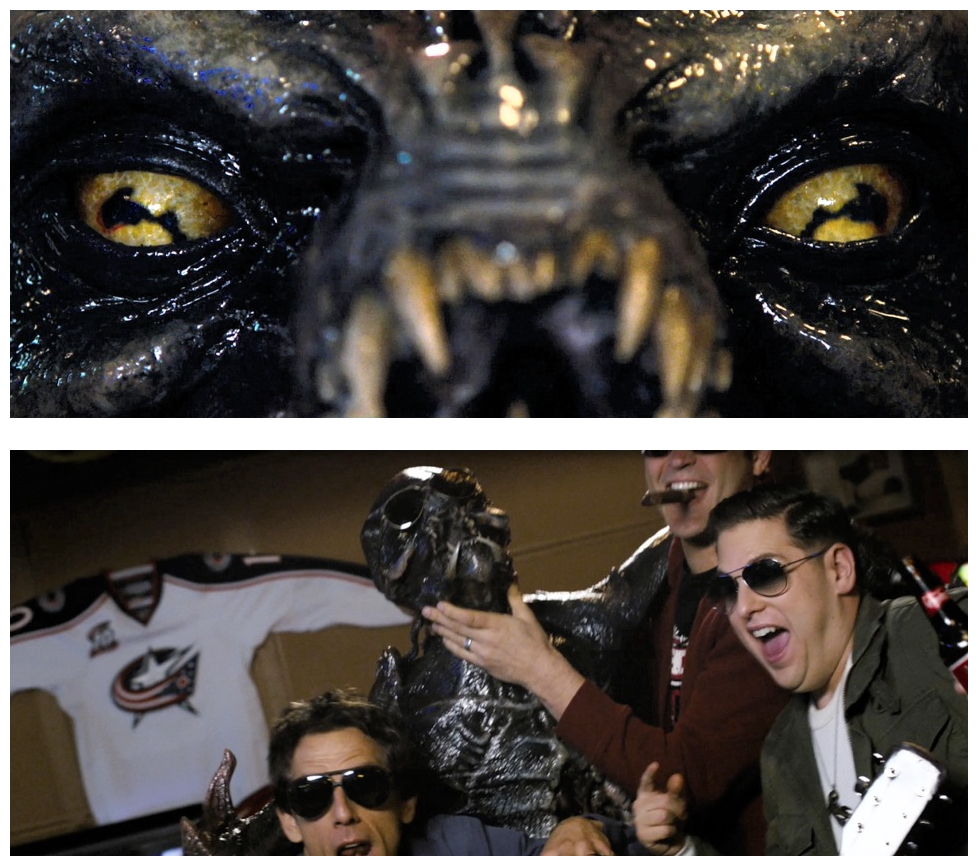 I put this down to director Akiva Schaffer‘s previous experience making sketches and shorts for Saturday Night Live. The sequence in which they accidentally trigger an unrecognisable weapon to detonate a cow demonstrates the dynamic between the actors as much as the characters. (Roger Ebert: “Has lots of energy but not much inspiration. Crude, vulgar and offensive.”) Hill says he tried to play his character straight but found it hard not to laugh at the other guys during filming – the script called for ad-libbing in several scenes, including fooling around with an extraterrestrial, dressing it up as a woman, posing with it for photos, and even indulging in a hokey slow dance number. If you’re not moved by exploding cows, then the over-the-top sci-fi action during the final act might raise a smile. (Rolling Stone: “Should be crazy stupid fun but settles for just stupid.”) 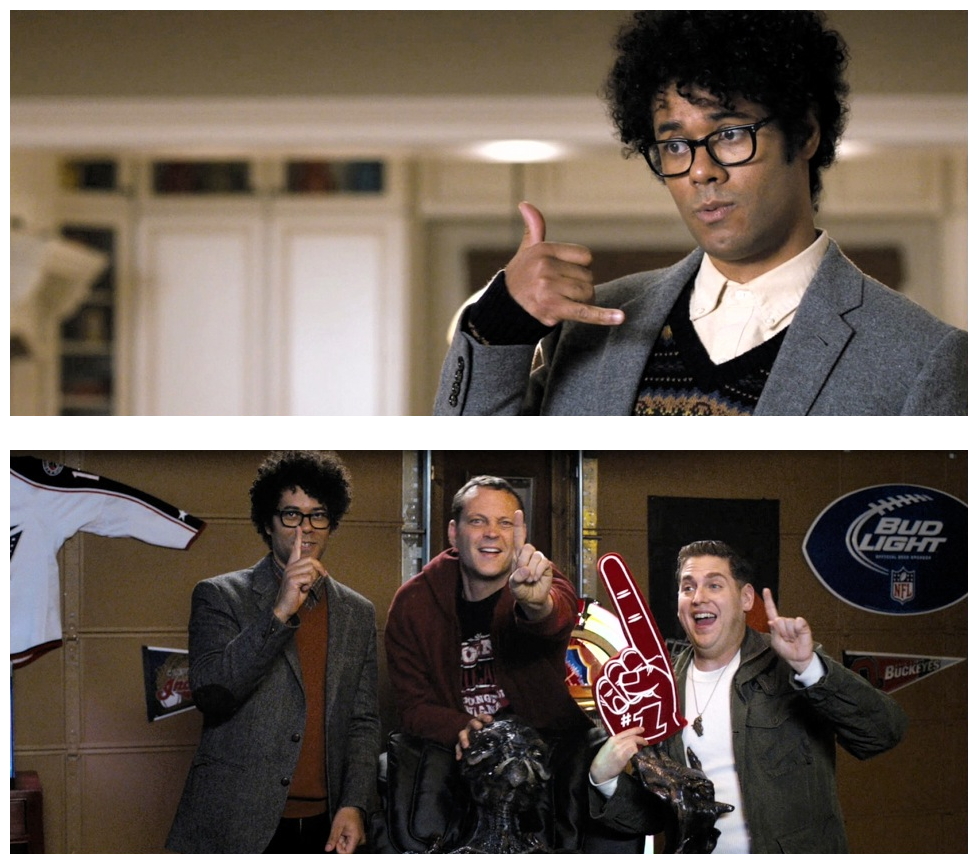 The four leads clearly had a ridiculous amount of fun making The Watch – the double entendres fly thick and fast, there’s knockabout humour aplenty and, by the end, the guys have been forced to face up to more than a few home truths – but you’ve seen them all before in far better form in far better films. I also find it very difficult to believe the budget was almost US$70 million, but it’s very easy to understand why it failed to make its money back. Essentially this is ‘secret men’s business’ through-and-through, not to be watched on first dates or with your mum – unless, of course, she turns out to be an alien too. It’s with this sad thought in mind I’ll bid you a good night and look forward to your company next week when I have the opportunity to put goose-bumps on your goose-bumps with more ambient atmosphere so thick and chumpy you could carve it with a chainsaw, in yet another pants-filling fright-night for…Horror News! Toodles! 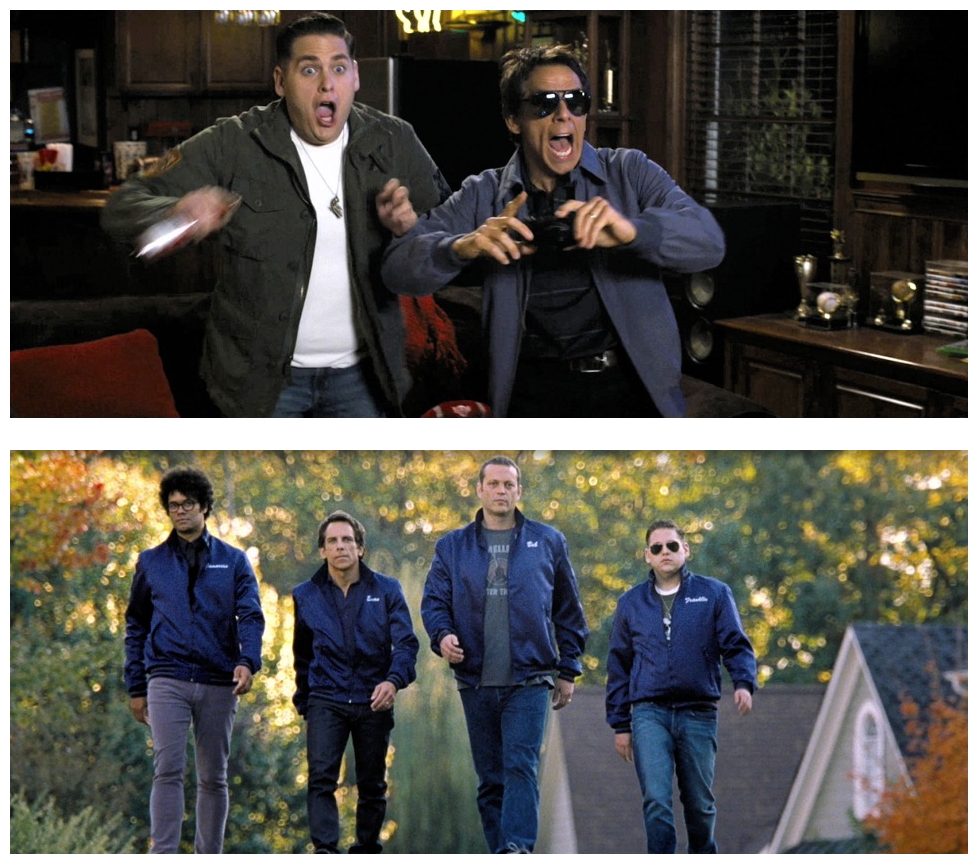