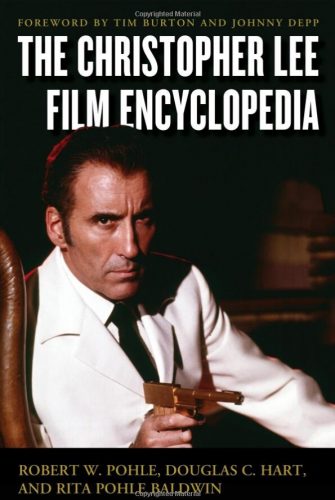 Countless (no pun intended of course) books have no doubt been written about the career of the late Sir Christopher Lee, the actor arguably best known for his portrayal of Count Dracula and his appearance in scores of science fiction, fantasy and horror films.

I was introduced to Sir Christopher’s work when I was five and caught several scenes of Horror Express (1972) on television. I recall him being tall, surly and authoritative before those concepts were even apparent to me. Horror Express was the result of a wonderful bit of last-minute inspired moviemaking and rumors concerning its origins have swirled for years long before the availability of the Internet to the masses: the leftover train from Doctor Zhivago (1965), or Nicholas and Alexandra (1971), or (as contended by the producer) Pancho Villa (1972), the last of which is probably the case as it was also directed by Eugenio Martin and also starred (I kid you not) Telly Savalas, was the inspiration for this nifty horror outing that has remained a favorite of mine for over four decades.

The Christopher Lee Film Encyclopedia is an excellent book that covers every role that Sir Christopher has played over eight decades(!) Arranged alphabetically, each film is listed by title, cast and the major behind-the-scenes personalities, a synopsis, notes/reviews, and finally Sir Christopher’s own personal comments about most of these roles. Some appear in the form of lengthy interviews. Don’t expect him give himself a pat on the back over each part in his life’s work, however. There are numerous titles that he completely dismisses.

In addition to the A – Z film titles, the appendixes consist of shorts, television appearances, voice over work, alternate film titles and foreign language titles.

The book has a heartfelt forward by Tim Burton and Johnny Depp. It must be a true delight to both men to have had careers that afforded them the opportunity to work with Sir Christopher. Douglas Fairbanks, Jr. reminisces about the sheer versatility the Sir Christopher possessed, something that he contends most people were unaware of. Finally, Sir Christopher himself, who had appeared in over 150 films, doesn’t like to call horror films by such a name, and laments the low budgets on such films to say nothing of the challenges that he and his co-stars were forced to overcome in order to make the “unbelievable believable.”

The book is primarily a tome of information and therefore sporadically illustrated with a minimum of black-and-white photographs. However, if you’re a fan of Sir Christopher, this book is an absolute must. With Halloween approaching, don’t wait!