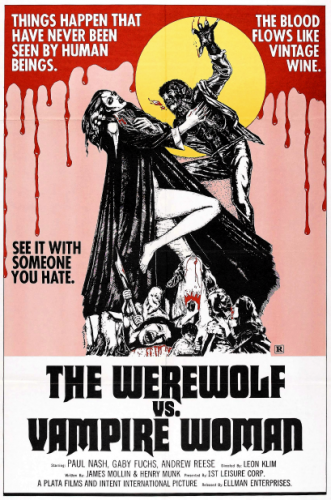 “Elvira is traveling through the French countryside with her friend Genevieve, searching for the lost tomb of a medieval murderess and possible vampire, Countess Wandessa. They find a likely site in the castle of Waldemar Daninsky, who invites the women to stay as long as they like. As Waldemar shows Elvira the tomb that supposedly houses the countess, she accidentally causes the vampire to come back to life, hungrier than ever. Daninsky has a hidden secret of his own, but will it be enough to save the two girls from becoming Wandessa’s next victims?” (courtesy IMDB) 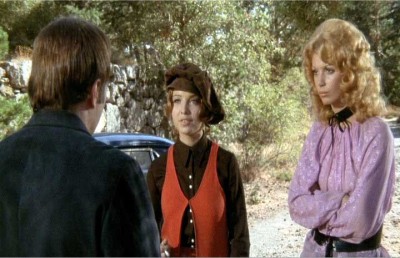 There’s the opening scene of The Werewolf Versus Vampire Woman, with Two Men In A Morgue – sounds like a new hit sitcom – anyway, two guys examine the body of a gentleman who was supposedly a werewolf. One man posits that the corpse was indeed a werewolf. The other guy is obviously a Man Of Science, because his reply is a derisive one. However, he is willing to entertain his friend’s notions to the point of trying to disprove them. Now, anyone who has watched a few horror movies must have been covering their eyes in disbelief. Not only is this scientist Meddling With Forces He Does Not Understand, he is doing it in the middle of the night, during a full moon, which is of course the worst time to do anything around a werewolf, even a dead one. 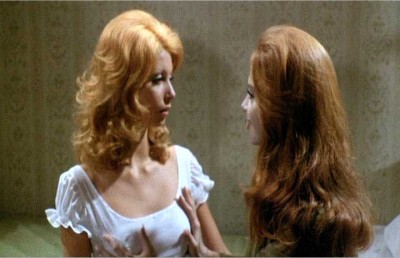 Meanwhile in Paris, Elveera says goodbye to her boyfriend. It must be Paris, because the windowless bar in which this scene takes place has a small display of postcards featuring Paris landmarks. Really! I’m not saying that a film must be made on location to be convincing, but they could have tried just a little harder at faking it. Even a bit of Seine stock footage would have helped this case. Elveera doing some kind of study on a notorious figure in French history named Countess Wandessa. Wandessa drained virgins of all their blood, and then killed them. How exactly she managed to drain their blood without killing them first isn’t made clear, but they’re described as separate acts. 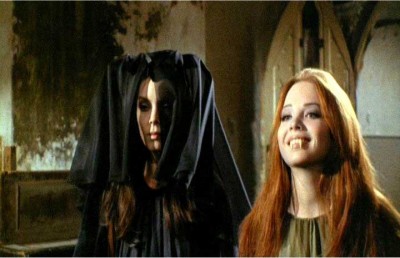 Wandessa is obviously based on the notorious Hungarian Countess Elizabeth Bathory, though the movie has moved her to France. Oh, and Elveera has determined that she may have been a vampire. You reckon? Elveera’s hot girlfriend Genevieve is played by Barbara Capell, and she’s the main reason not to change the channel. They head off into the, ahem, ‘French’ countryside. It also happens that this estate comes equipped with Waldemar’s crazy, homicidal sister and a shack out the back with chains and bloodstains on the wall. But none of this deters Elveera, who manages to fall in love with Waldemar and disturb Wandessa’s grave, releasing the vampire lady to stalk the land again.  If the scene in the morgue wasn’t bad enough, there’s an even dumber scene later on. When Elveera, Genevieve and Waldemar find the tomb of Wandessa they find the remarkably well-preserved corpse with a silver crucifix sticking out of its chest. Genevieve blithely pulls the crucifix out. Then she cuts herself on something and the blood drips in the corpse’s mouth. Waldemar proceeds to recount the legend about how Wandessa will come to life if the crucifix is removed and the red breath falls into her mouth. And then they all just walk away, apparently unconcerned that they have released ultimate evil. Come on, it’s not like these people don’t believe in the supernatural! One of them is a damn werewolf, after all!

Jacinto Molina aka Paul Naschy aka James Molin, the screenwriter, has squeezed out dozens of mediocre horror flicks, twelve of which feature the Waldemar Daninsky character. Through the application of tenacity and fake fur, the multi-monikered man has made himself a screen legend. I think the real, ahem, ‘showpiece’ of The Werewolf Versus Vampire Woman is the final few minutes, when Wally goes on a hairy rampage and gets around to fighting the titular vampire woman. It makes Mexican wrestling look like Jackie Chan, and might be the best time to wander off to the kitchen to put the kettle on. Anyway, please join me next week when I have the opportunity to give you another swift kick in the good-taste unit with a far better terror-filled excursion to the dark side of Hollywood for…Horror News! Toodles! 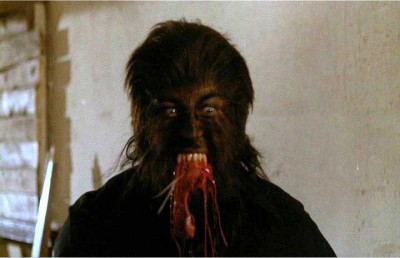 The Werewolf Versus Vampire Woman (1970)