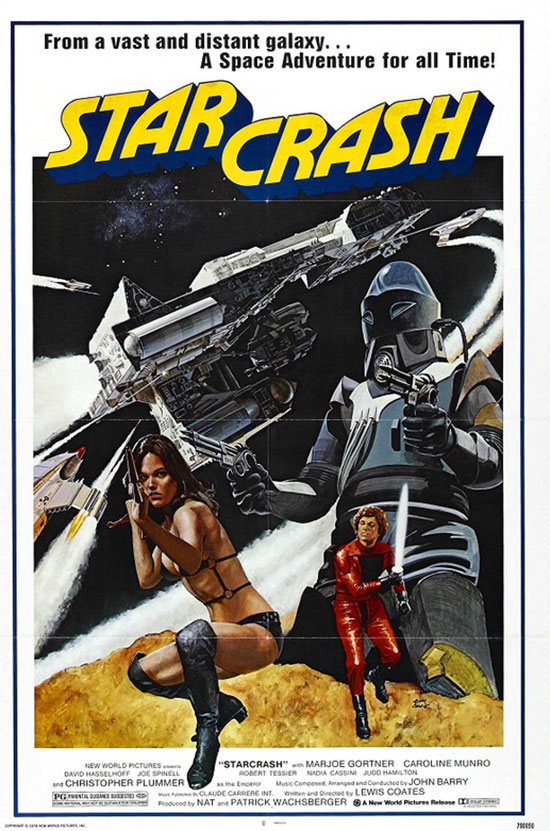 An outlaw smuggler and her alien companion are recruited by the Emperor of the Galaxy to rescue his son and destroy a secret weapon by the evil Count Zarth Arn.

If you’re a fan of the show Mystery Science Theater 3000 and watched the Netflix continuation of that show, you might recognize Starcrash. It was one of the flicks they covered in the first half of the season. Rest assured that watching the movie without the on screen presence of Jonah and the ‘bots is a painful experience. It also may damage your personal relationships if you force others to watch it with you. For instance, my girlfriend finally started speaking to me a few days after watching the movie. I’m hoping we’ll get back to making eye contact again, but that can take a while since I’m not sure she’s ready to forgive me for making her watch Starcrash with me.

Starcrash follows the smugglers Stella Star and her navigator/sidekick Akton. After getting arrested for their many crimes, they’re given a chance to commute their sentences if they help the emperor. Apparently, the evil Count Zarth Arn (Really? Zarth?) has a new secret weapon. The Emperor wants Stella to get her groove back and find the location of the Zarth’s hidden base while being accompanied by the lawmen that captured her. With lawmen and sidekick Akton in tow, Stella heads off into Count Zarth’s territory to try to stop him from using his new weapon on the imperial home planet. 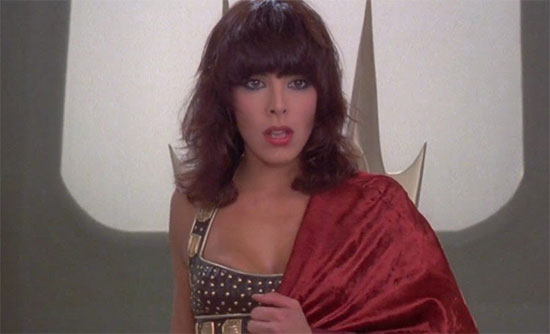 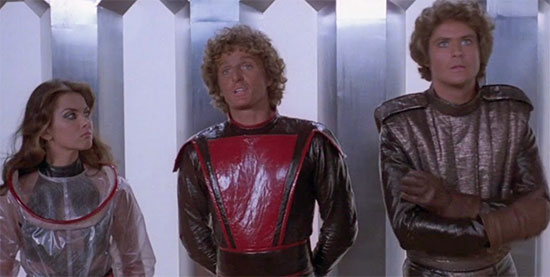 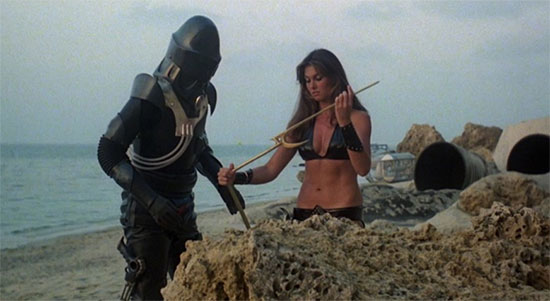 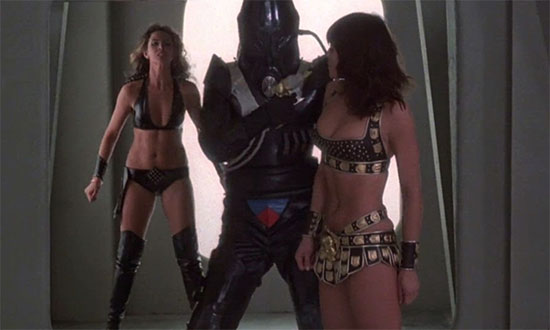 As many of you may be familiar with, Italian filmmakers in the late ‘70s and ‘80s had a heyday of trying to cash in on popular American properties by either making movies and passing them off as sequels or flat out ripping a film off. Starcrash is such a blatant rip-off of Star Wars that I’m surprised the Lucasfilm lawyers hadn’t tried to sue the entire production team out of the industry. Not only do we have a robot with an annoying accent, a secret superweapon that could spell disaster for universe if the bad guys can get it to full power, and a “massive” space battle, we also get have a blonde headed dude with mystical powers wielding a lightsaber. Seriously, these folks must have found a plum legal loophole to avoid the wrath of George Lucas.

Like many Star War clones of the era, this movie barely had any budget. It obviously had far less than George Lucas had to work with when he made Star Wars. I’m willing to bet they had less than what he had to work with when he made American Graffiti, and they didn’t have enough of a talented special effects team to make up for it. The laser fire from weapons looked like the horribly cheap animation that it was, the stop motion animation on some of the miniatures looked like it had been done by people that barely have a grasp on how to do it. When the characters make the jump to hyperspace, it looks like they’re traveling through a Windows 95 screensaver. The “space battles” managed to be so underwhelming it was actually kind of sad. 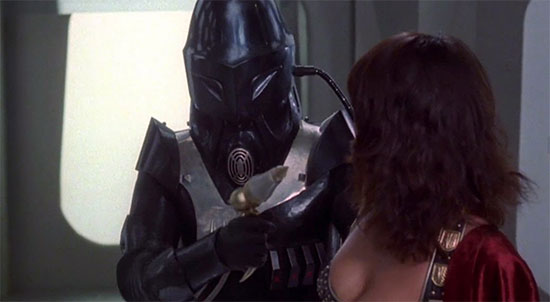 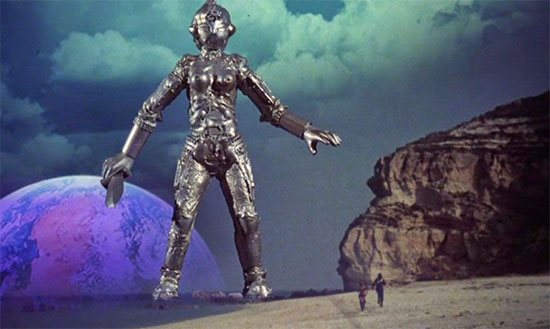 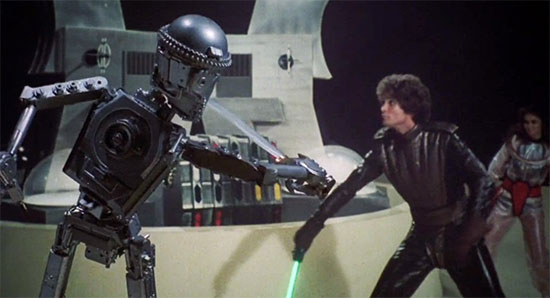 The movie also asks you to go along with things without asking a lot of questions. Like Akton having mystical powers. We’re never told that he has them until he starts using them, and he starts to use them whenever the plot needs him to. No clear explanation to what his powers can do, what his limits are, and how he even has them. Is it something unique to his people? Maybe his power from his blonde Afro he’s sporting? Don’t worry though, you’ll stop caring about these details. You’ll be too praying for the movie to end or for sweet merciful death to finally embrace you to end the misery. 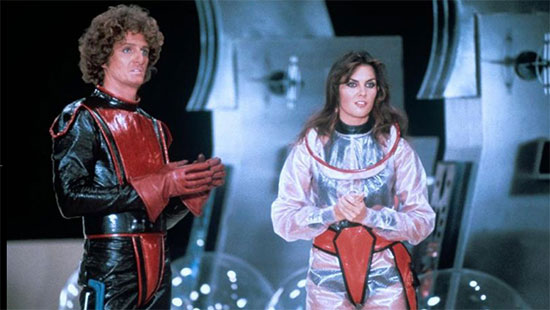 We’re also supposed to believe that Stella Star, an alleged master smuggler who lives in constant danger, would choose to not wear any kind of practical clothing while placing herself in danger. She spends 75% of the movie wearing high heeled boots and a skimpy outfit that seems to get skimpier throughout the movie. Apparently dressing like some kind of space stripper is appropriate for the most dangerous missions. Personally, I’d try to wear something that offers a modicum of protection from both the elements and laser fire, but I guess I’m just weird that way.

The combat scenes we’re subjected to makes William Shatner’s own fight scenes from the original Star Trek series look like well choreographed martial arts masterpieces. The acting is painful to watch, which is saying something. Most of the performers look like they barely passed a first term of acting classes.This movie even has Christopher Plummer in it, and he’s an amazing actor. However, I have to wonder how badly he needed the money to take this part. He was slumming it, and he looked like he was slumming it. You can almost feel his shame radiating off him in each of his scenes. Sadly, not even he could give a good performance in this film. 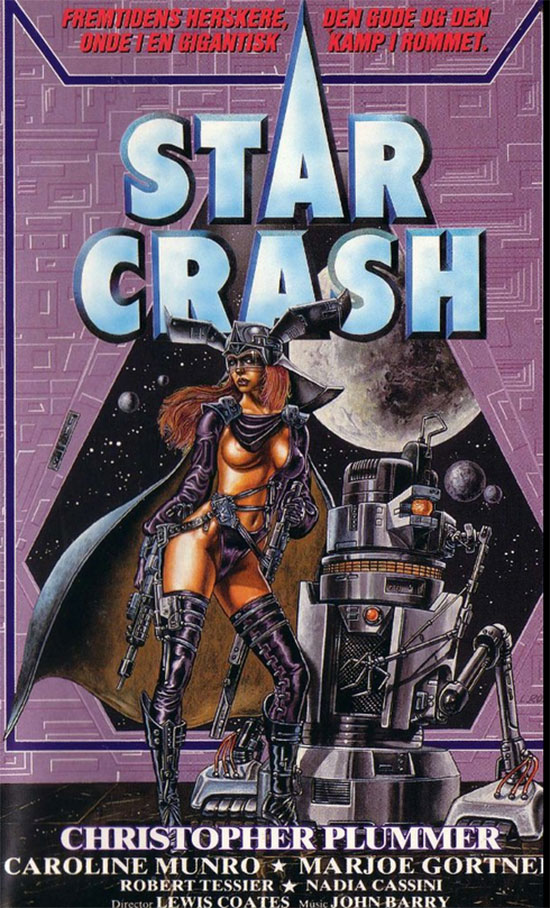 But hey, Starcrash has a very young David Hasselhoff in it. That has to account for something right? (If your answer is derisive laughter, that is the appropriate reply). 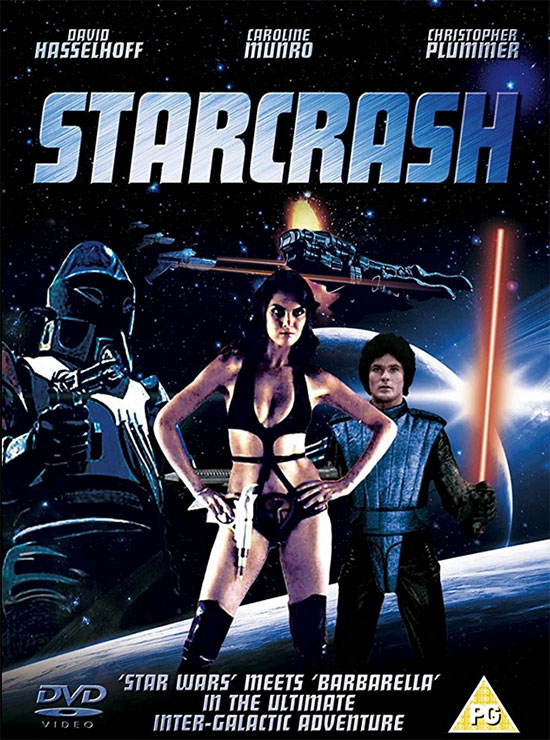 The fact that this movie was riffed on in the new Mystery Science Theater 3000 should be all the warning you need about what you’re getting into. If you even have the tiniest shred of curiosity about sitting through this abomination, do yourself a favor and don’t watch it by itself. Fire up your Netflix and watch the MST3K version instead. Otherwise, be prepared to suffer. 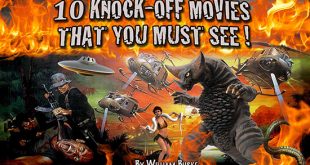 10 Knock-off Movies That You Must See!