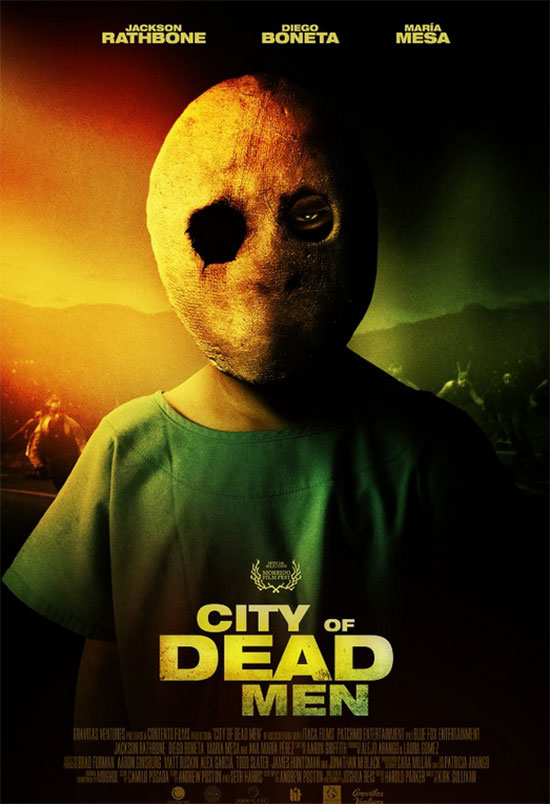 An American traveling in South America ends up living with a group of misfits at an abandoned hospital with a troubling past.

I gotta be honest with everyone reading this:  I haven’t been much of a fan for movies made after 1990. It seems that too many films made since then rely on rehashing (often poorly) what has gone before. Add to that the recent unstoppable trend of remakes, reboots, re-imaginings, etc., and you have an industry that seems to be eating its own feces. So, I will admit a bias going into the film under the scope today as it has the misfortune of being made in 2014.

All the above being said, I do try to give a film an honest viewing and do my best to keep the review locked within what the film itself gives me. What CITY OF DEAD MEN gave me was, for the most part, a headache.

The first few minutes of the movie showed great promise even though it felt like I had been there before. You get a dark hallway in a medical facility. The camera shows you children locked in rooms as they act out in strange ways, while you get a young girl telling you about insanity. The setting is moody. The children look miserable. The environment looks corrupted. And there is one seriously weird-looking bug that becomes a repeated image throughout the entire film.

One kid, who seems to be worse off than the rest, commits suicide in a rather brutal fashion. While you are spared seeing the actual death, you hear it just after seeing what is about to happen. That was a nice touch. After he commits suicide, you lead to believe that the rest of the kids also commit suicide as the young narrator tells you that the insanity is infectious.

Leap ahead a number of years later to meet Michael, played by Diego Boneta, in Columbia where he is pulling scams to make ends meet so he can basically live in the streets and avoid going home to America, or wherever as they never make it clear where his home really is. He illegally crashes in the back of a random vehicle. The next morning, he wakes up to find the vehicle in motion just as his phone alarm sounds. The car’s driver, understandably pissed off at having an unwanted stowaway, attempts to teach the “gringo” a lesson until a pretty young woman, Melody (Maria Mesa) helps break up the fight.

Lo and behold, she knows of a party that night and suggests Michael go. Since the movie will die in the water like a great white shark that stops moving forward, he takes her up on the suggestion. 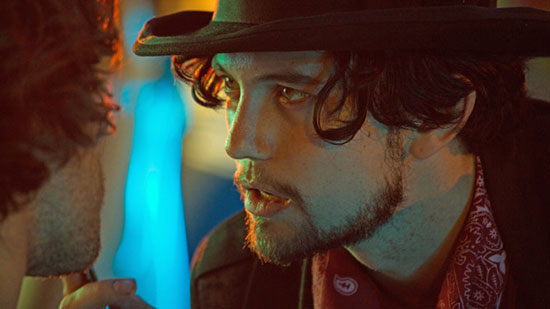 Here is the first major downturn the movie takes, in my opinion. Yes, I was young once and did many very stupid things. Most of us have. Unfortunately, as I’ve gotten older, I find I have little patience with characters. in movies and books and TV series and even video games, who make bad choices for no reason other than to lead to the next part of the story. I cease to care for or about these characters. At this point, I threw up my hands and hoped Michael gets all the misery his idiotic behavior deserves.

Michael arrives at a run-down building in the apparent middle of nowhere. Inside, a rave seems to be underway. The guy in charge of the event notices the out-of-place visitor and calls Michael over. We now meet Jacob (Jackson Rathbone), who is the leader of “The Lost Boys” — no, wait, “The Dead Men”. He is charming, intelligent, and more than a bit spooky.

Jacob welcomes Michael to stay the next morning, and they seem to have a kind of kinship, though Michael, wisely, maintains a hint of distrust. His distrust seems well-founded after his new “friends” give him a mind-altering substance without telling him what it is. Yet another in a series of stupid, stupid choices our “hero” makes.

While whacked out on the drug, Michael starts seeing images of the building where The Dead Men are squatting. Turns out that it was a medical facility, the same one from the beginning of the film, and, of course, the spirits of the dead children are everywhere. Oddly enough, Michael sees his younger brother among them. The brother died, and Michael is carrying around a steamer-trunkful of guilt about the death.

Is anyone keeping a running list of the clichés and tired tropes? I’ve run out of fingers and toes.

The Dead Men make Michael one of their own after he makes more bad choices like riding a skateboard down a mountain road and standing in the middle of the road while a pack of motorcycles roar around him with ample room to spare. Yep, that’s living as if you are already dead, which is how I was starting to feel inside at this point. 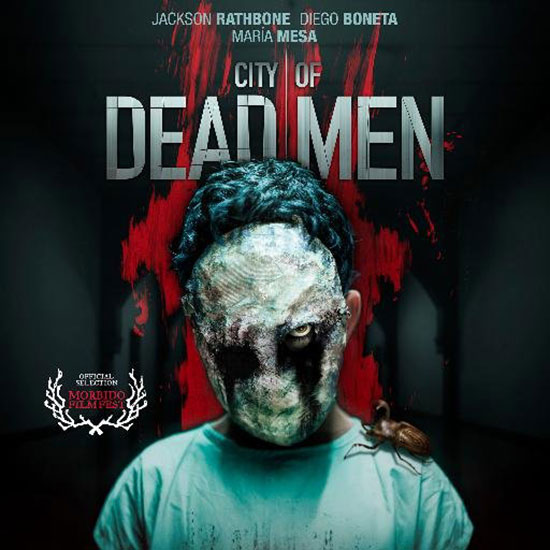 Golly, but it turns out that Peter Pan – sorry, Jacob isn’t quite the person he pretends to be, and he has plans for both Michael and the rest of the Dead Men that has something to do with some ancient ritual hinted at in those opening scenes with the kids.

THE CITY OF DEAD MEN does lift a bit from THE LOST BOYS, but that is the least of its issues.

You are given very little reason to connect with any of the characters as they just seem to be on the screen to move the plot along. Michael makes bad choices; Jacob is obviously mental, and Melody is only there to provide Michael with a sounding board for exposition and as a bargaining chip towards the end of the film. I will grant Jackson Rathbone a cookie for giving his rather one-dimensional character a boost that almost makes Jacob a worthy character, but it still falls short.

The padded film seems to rely on endless shots of the Dead Men having fun with motorcycles, four-wheelers, guns, and what have you when they aren’t drinking, doping, or dancing like brainless zombies to dubstep. I understand this is to show their carefree lifestyle, but all I can think is “Where the hell do they get the money for all of this if none of them seem to work?”. Yeah, how dare I confuse common sense with movie “reality”! 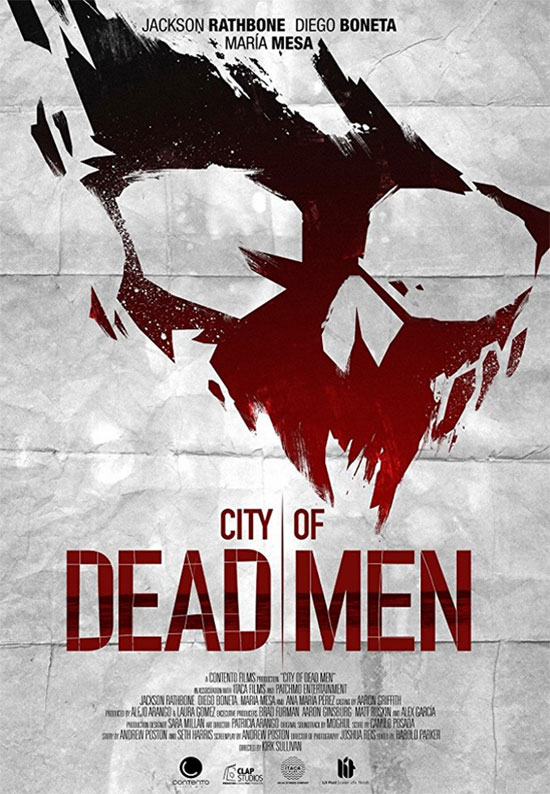 The story cannot decide what it wants to be as it basically throws a bunch of crap at the wall and hopes to hell some of it sticks. You get a mystery, a supernatural spook show, a drama about loss and recovery, a rather limp love story, a thriller that isn’t terribly thrilling, and a social commentary on lawlessness in Columbia. Don’t expect any of these threads to be properly woven together by the ending.

Another issue I would like to address is the sound in this film. Well, that and the dialogue. Half the time I couldn’t make out what was being said, resulting in backing the film up and cranking the sound. More often than not all I got was mumbled dialogue that I had to piece together with what I could hear to figure out what was being said. Add to that the fact there are chunks of the film that are in Spanish, namely when Michael goes to a shaman for help. The version I watched provided no subtitles for this and other such conversations, so if there happened to be crucial plot points made during these scenes, they were lost. While I get this is an age of “all-inclusiveness”, some of us out here are not multilingual. Hopefully the DVD provides English subtitles for these parts. If not, then good luck following what is being said.

I have made it sound like the film is a total wash. It isn’t. It does have a solid set up. The acting isn’t bad, though some of the actors give more to their roles than others. Visually, the film is actually impressive with the choice of locations, camera set-ups, and lighting making the film dark and brooding or mind-bogglingly colorful. Plus, the creators made an effort to develop something different than your usual torture-porn flick with stupid tourists as the targets. I applaud the effort. As a whole, it just doesn’t work, but I would definitely be interested to see what else these filmmakers attempt in the future.