As a child of the 80’s, I didn’t grow up with the luxury of dolls being very friendly toys.  Movies such as Child’s Play, Puppet Master, and Dolls overshadowed any enjoyment that I could find while playing American Girl Dolls with my friends.  Instead, I was paranoid and always thought they would come to life and murder me in my sleep. 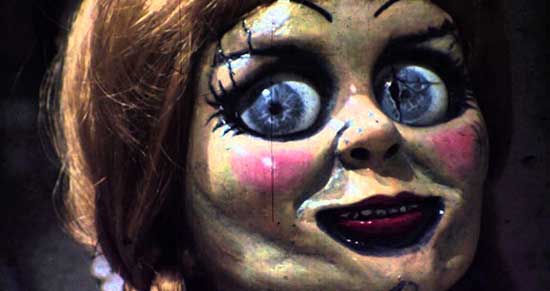 So, I’m actually pretty pleased that this whole killer doll genre has come full circle to terrorize kids again with the Annabelle franchise. The best part is that Annabelle is actually real and currently biding her time quietly tucked away in Connecticut behind a locked case for eerily justifiable reasons. Her tale is one of mischief and deceit that caused even world renowned demonologists grave concern. So, sit back, relax (if you can), imagine you’re around a crackling campfire in the dead of night, and let me tell you the story of Annabelle.

The year was 1970. A nursing student named Donna was gifted a classic Raggedy Anne doll by her mother from a local hobby shop. Thankful and sentimental for the gesture, Donna and her roommate, Angie, went about their busy lives until they started noticing Annabelle… change. Feelings of unease and confusion clouded the apartment as they would find Annabelle regularly out of place and in different positions from how she was left. 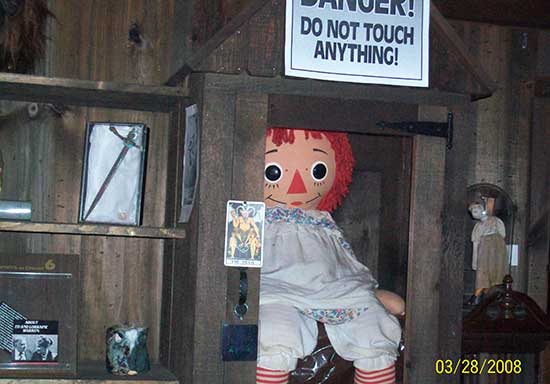 Now, these changes were slow. First, her legs may be crossed when they weren’t left that way. Then as time went on, Annabelle began to take on a life of her own. If she was left on a bed, she was found later on the couch calmly staring back at them once they entered the door. At times she was even found to be standing upright as if ready to pounce once her beloved owner discovered her.

A month into these abnormal movements, Donna began finding pieces of parchment paper littered around her apartment with one word frantically scribbled on them: HELP.  Not only was no one there…but the girls did not own parchment paper. Donna brushed off the scene until one day, she found the doll sitting on her bed with her hands and back mysteriously covered in thick, red liquid.  Let that sink in a minute. They stuck it out and ultimately put lives at risk as a result. Not knowing what to do, they called a medium to help as soon as possible. 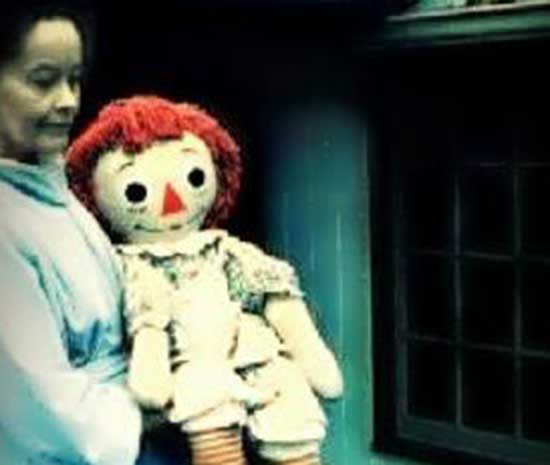 During a seance, the medium warned the girls that the doll was possessed with the spirit of Annabelle Higgins, a deceased seven year old whose decomposed body was found long before their apartment complex was built. Overcome with compassion, they decided to keep Annabelle after the medium relayed her desire to innocently be loved and looked after by them.  However, their friend Lou saw through the plea and was wary of Annabelle from day one. 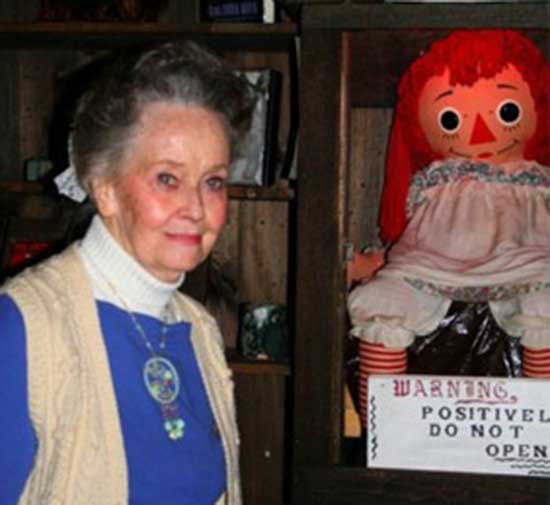 One evening when Lou was asleep, he froze into an episode of sleep paralysis and conjured up a disturbing dream where Annabelle slowly slid under the sheets… climbed up his body…first crawling on his leg…then up his chest…and stopped abruptly inches from his face. Her hands then firmly wrapped around his neck until he violently woke up struggling to breathe.

As if that wasn’t bad enough, he found himself back at the apartment preparing for a road trip with Donna.  Random rustling sounds began permeating the walls. They went to investigate and as the door slowly creaked open, there was Annabelle… pensively perched in the corner gazing back at them with solid black, abysmal eyes and that taunting grin.  Lou suddenly had a feeling that a dark presence was firmly hovering behind him. As he cautiously turned around, fearful of what his eyes would encounter, nothing was there.

Then, BAM!  A piercing pain penetrated his chest and he immediately doubled over to the floor. His chest was viciously cut and blood was freely seeping through his clothes. Frantically trying to figure out what happened, he unveiled what looked like seven distinct claw marks, three vertical and four horizontal, that were radiating heat and burned into his flesh. 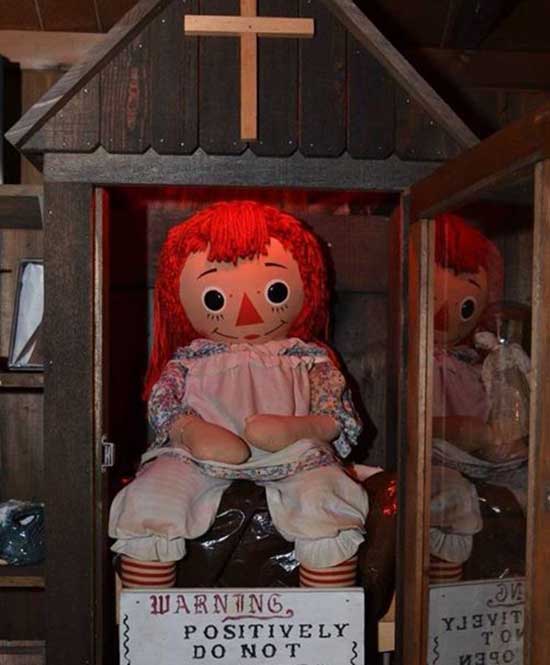 After two days, the wounds mysteriously disappeared. Convinced Annabelle was not possessed by an innocent spirit but something else…something more sinister…more satanic, they called their Episcopal priest to assist. Not able to contain the entity alone, the priest contacted renowned demonologists Ed and Lorraine Warren.  Experts in the occult, the Warrens immediately concluded that Annabelle was not possessed. 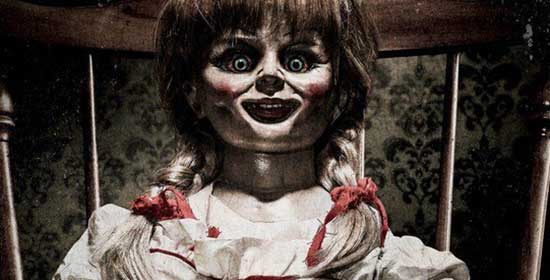 People become possessed by spirits not objects.  There’s only one kind of inhuman entity that attaches itself to objects like houses and toys and that was demons. Once obtaining recognition, the goal of the entity was eventual possession of a human host.  Currently in the stage known as infestation, previous experiences had all been manipulative stages where the entity accrued strength.  Teleporting around their apartment, materializing handwritten notes, symbolic drops of blood, and inflicting the mark of the beast upon Lou had all been carefully crafted plans for possession. Had these instances lasted two or three more weeks, Annabelle would have been strong enough to kill any one of them or at the very least, inhabit their body. 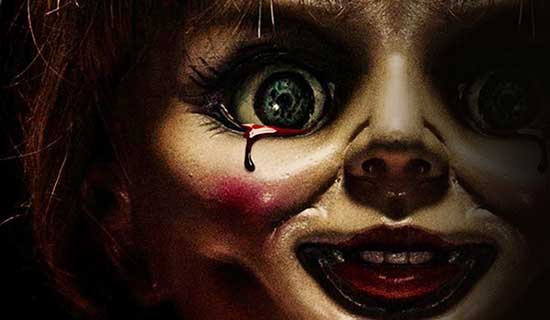 A recitation of an exorcism seven pages long was conducted in the home.  The Warrens ended up leaving with Annabelle but not without precaution.  They constructed a locked box to keep Annabelle concealed within their museum of haunted artifacts and a priest regularly blesses the area to this day.  Although she is physically restricted, Annabelle is thought to have been responsible for the death of one museum visitor.  After banging on the glass and teasing her with his girlfriend, this man declared that she was just a doll and couldn’t hurt anyone.  On their way home, the couple were laughing about the incident and getting kicked out of the museum.  Suddenly, their motorcycle lost control and the man flew head first into a tree, dying upon impact while his girlfriend was hospitalized for a year afterwards. Visitors to the museum have had to sign a waver ever since. 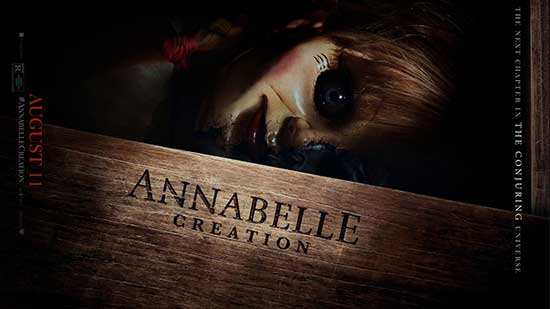 Annabelle: Creation is the second installment in the franchise and dives into the doll’s backstory.  Her features are strikingly different than her real-life counterpart in order to convey a balance of creepy and innocence more relatable to a child’s doll they may grow up with.  While the aesthetic is more frightening, just remember her story and what influenced this film franchise while you watch it.  Behind all of the scares and movie magic, know that The Warrens Occult Museum exists. Know that Annabelle is patiently waiting, plotting for her optimal time to be released out of that box while we all just innocently enjoy our popcorn in cinematic delight. 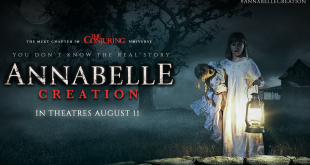