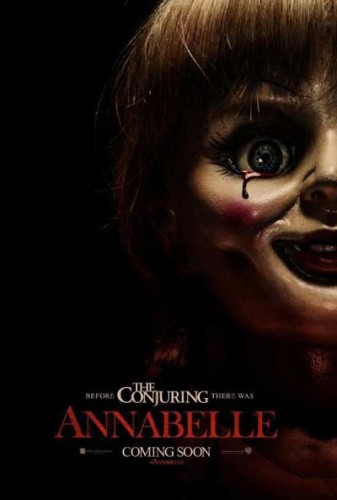 A couple begin to experience terrifying supernatural occurrences involving a vintage doll shortly after their home is invaded by satanic cultists.

Ever since Ananbelle was announced, there hasn’t been a day when someone hasn’t needled me ever so slightly as to its impending arrival. Why you ask? Because it’s no secret that I have an aversion to dolls, especially creepy looking ones that talk and attempt to kill their owners for some god forsaken reason. The overwhelming success of The Conjuring (2013), the film where Annabelle made her debut, ensured that we’d be seeing more material related to that film, but a film featuring the doll that was essentially a red herring for most of that film came as something of a surprise to me (was The Conjuring 2 already spoken for?). And now, after finally facing my fear and sitting down in a darkened theater to watch Annabelle, I can safely proclaim that I shouldn’t have worried all too much.

The film opens with the doll’s introduction scene from The Conjuring, with the two girls explaining their plight to the Warren’s. From there it goes back in time one year to tell the tale of how the doll came to be imbued with the demonic force that resides within it. We’re introduced to John (Ward Horton) and Mia (Annabelle Wallis), an incredibly bland couple who are expecting their first child, as they’re attending Sunday services at their local church. They’re with their neighbors, Pete (Brian Howe) & Sharon (Kerry O’Malley) Higgins, and it’s here we discover that the Higgins have an adult daughter (named Annabelle) who’s been missing for a while (It’s later explained that she ran off with some sort of Manson like cult). Later that evening, as everyone is asleep, Mia hears a scream come from her neighbor’s home and asks John to investigate. Turns out that the Higgins’ daughter has come home (with another cult member) – and they have murder on their minds. After murdering her parents, the duo go over to kill Mia, John & their unborn child. And although Mia does get stabbed in the side, John manages to fend off her attackers until the police arrive, shooting Annabelle’s partner while she slits her throat in another room. But she expires with Mia’s brand new doll in her arms (She collects dolls & it’s given to her as a gift from her husband). And a drop of her blood, falls onto the doll’s face… 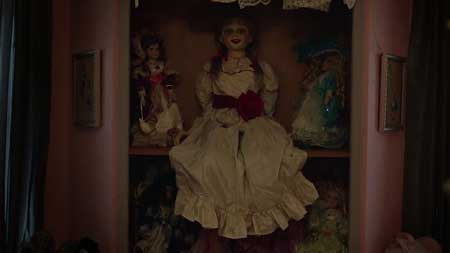 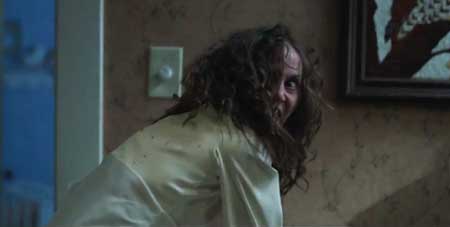 Luckily, the unborn child is unharmed, and after a mysterious kitchen fire (which puts Mia into labor – giving birth to a baby girl), the couple move out of their rented home and move into a nifty apartment with plenty of space for their growing family. As they’re unpacking, the doll (Who’s never referred to as “Annabelle” in the film) suddenly appears in a box – and John swears he didn’t pack it. But, despite the eerie visage the doll suddenly has, Mia decides to keep it anyway. It’s not too long after this decision that odd things begin to happen around the apartment, odd sounds, hallucinations and something that seems to be the ghost of Annabelle, begin to plague Mia. Over the course of the rest of the film, we learn exactly why all of this is taking place, and what it has to do with Mia and her baby.

Although I’m pretty sure the creators will deny it, Annabelle wants nothing more to rehash of a lot of what made Rosemary’s Baby (1968) so successful. So much so, that it sometimes feels like more of a remake of that venerated film that the TV remake of it that played on NBC over the Summer. The grand apartments featured in both films are similar, the basements featured in both films are similar, and a lot of the satanic imagery that comes later in the film is exactly like what you’ve seen in Polanski’s classic. Hell, they even named the lead character Mia! None of this can be construed as coincidence, I don’t care what anyone says. Oddly enough, it’s these elements of the film that are the most effective things going on in Annabelle. When director John Leonetti focuses on these aspects of Gary Dauberman’s script, Annabelle manages to generate a fair share of dread & tension. Leonetti made his name in Hollywood as a cinematographer and his wealth of experience shines through here, his camera slinks around corners and lurks behind the characters here like a jaguar, ready to pounce on its prey. There are also a few nicely tuned tracking shots here that amp up the frights nicely. 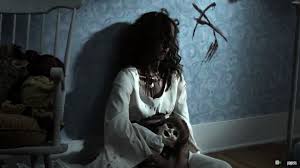 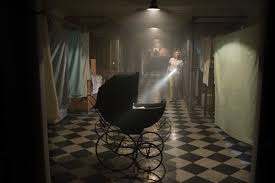 There are a few things that drag the film down though. It’s slavish dependency on recreating images from Rosemary’s Baby don’t help give it much credibility/originality. Additionally, despite its title, Annabelle doesn’t really have all too much to do with the titular character. I was reminded of this year’s Godzilla as I watched it, because much like this year’s Kaiju hit, its titular character is essentially pushed into the background, while different elements of the film are featured. To be fair, we eventually did get some of the Big G in his movie, but Annabelle remains curiously in the background throughout much of the film using her name as its title. Although I understand that the doll isn’t supposed to do much more than sit & stare as it steadily gets uglier (it looks just like Bette Davis via What Ever Happened To Baby Jane?), I think if she did a little stalking on her own, the film would’ve been a lot scarier. Alfre Woodard adds a bit of class to the film in her role, but she’s literally the only African American in the movie, and her character ends up doing something that felt to me as if the producers realized that they neglected the rule that states that “All important black characters in Hollywood films MUST DIE needlessly before the film ends“, and hastily wrote in a scene doing just that.

Ultimately, that’s my biggest hang up with Annabelle. It feels like a completely different script that was hastily rewritten to shoehorn the doll into it, in order to get the film into production quickly, and take advantage of the popularity that The Conjuring developed during its successful theatrical run. Take the doll (who really doesn’t too very much more than look nasty) out of the film, think of a different title – and you might have something. But it does have a few moments of genuine fright (none involving the doll), and there were a few members of the audience I watched it with who were jumping/screaming at the top of their lungs throughout, so it does do a few things right. 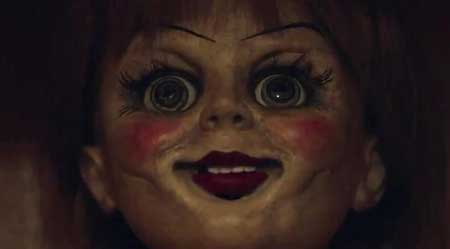 It didn’t really scare me at all (so screw all of you who were waiting for it to turn me into a mass of quivering jelly), but it’s a well made film with enough style & atmosphere to warrant a watch this weekend. It’s nowhere near the film I expected it to be, but maybe that’s a good thing (for me anyway).