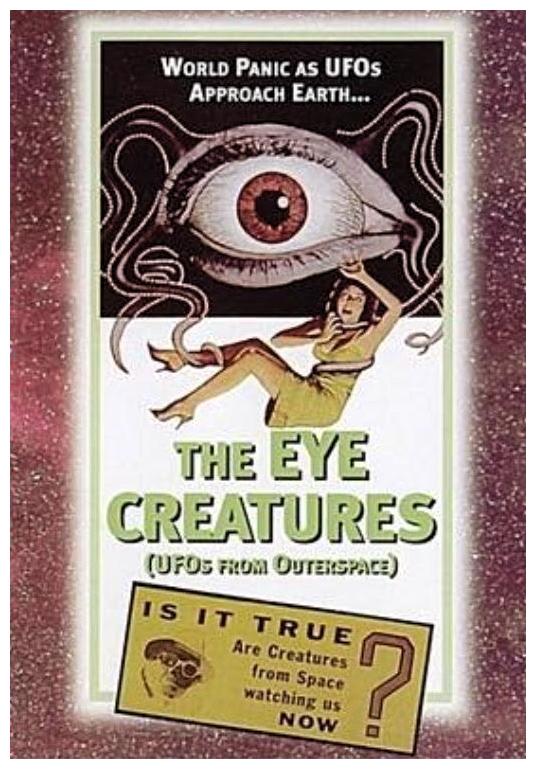 “A highly classified saucer landing is expected by top people in military. The local army base is instructed to keep watch for activity in the sky, but instead they use an infrared scope to watch local teens make out. The saucer lands. Meanwhile, the two main characters are trying to elope. Keeping headlights off to avoid attention, they run over an eye creature. They report this, but in the meantime the eye creatures have possessed the body of a young drifter and so the two are arrested. The army finds the saucer, cordons it off and blows it up. The teens escape from the police station and discover that the eye creatures explode when exposed to bright light.” (courtesy IMDB)

I love B-grade films – and so do you, or you wouldn’t be here – but I think in some ways the films from the sixties were way more ‘Out There’ in both concept and sheer silliness. Take this week’s movie for instance, Attack Of The The Eye Creatures (1965): That’s not a typo – the opening title card has two ‘The‘s (this was fixed on the 2005 DVD release, reducing the title to simply The Eye Creatures); the monsters look like bubble-wrap; the exteriors look like it was filmed in someone’s back yard; more effort was put into making the lead actress’s hair stand up than the actual monster costumes; the mistakes are too many to list, but I’ll give it a go. To make matters worse, it’s a rip off…I mean, a remake of a movie that was already bad to begin with, Invasion Of The Saucer Men (1957), with only half the budget of the original! Which studio would be brazen enough to green-light a film under such dubious circumstances? Who on earth would want to take credit for the resulting mess? 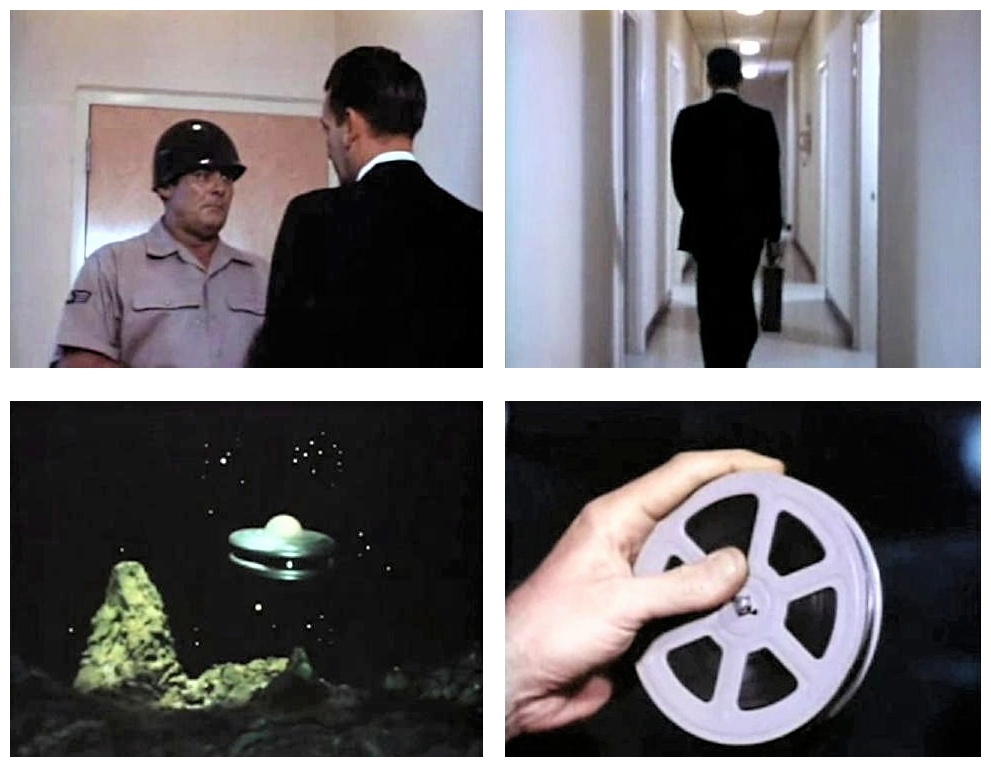 That’s right, no other than American International Pictures and Larry Buchanan, the idiot savant behind Zontar The Thing From Venus (1966), Curse Of The Swamp Creature (1966), Mars Needs Women (1967) and the optometrist’s nightmare known as The Eye Creatures starring John Ashley, Tony Huston, Cynthia Hull and the disembodied voice of Peter Graves! You see, in the mid-sixties, Buchanan was contracted by AIP to remake some of their already impoverished films as part of a television package. These became a ready-made late-night movie program – just insert one hammy horror host with an assortment of bad puns, and you have your late-night time-slot taken care of…hey! Anyway, AIP movies like The Day The World Ended (1955), It Conquered The World (1956) and The Astounding She-Monster (1957) were remade at a fraction of their already minuscule costs – not since Mary Martin gave birth to Larry Hagman has a Texan done such an outrageous disservice to the entertainment industry. 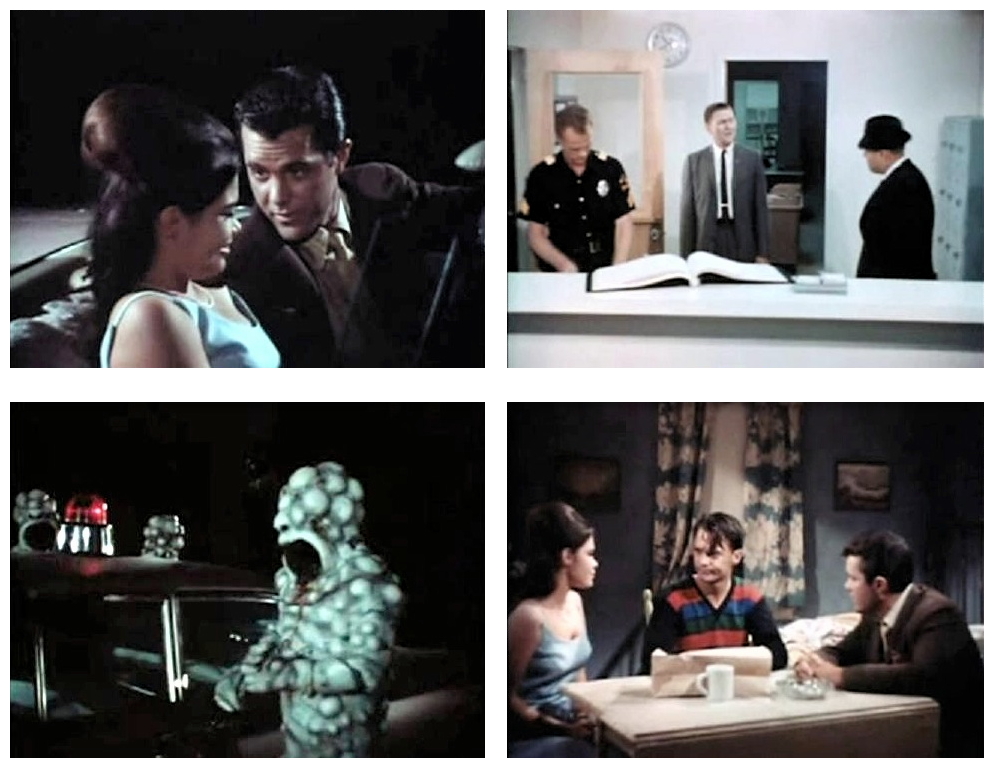 I went to the optometrist the other day, guess who I bumped into? Everyone! But I digress, As I was saying, back in the sixties, film studios like Universal were earning money by making their older titles available for television screenings. This seemed like a pretty good idea, so AIP decided to release their catalogue to TV as well, except there was one small problem – colour TV had just been introduced in America increasing the demand for anything in colour, so AIP contracted Texas producer Buchanan to remake some of their old black-and-white movies in colour specifically for TV audiences. The results were uniformly awful, although The Eye Creatures fights grimly to be the worst of the lot. The movie was shot in 16mm over several weeks in Dallas, and lead actor John Ashley, whose salary took up more than half the budget, was imported from Hollywood but the rest of the cast were locals. 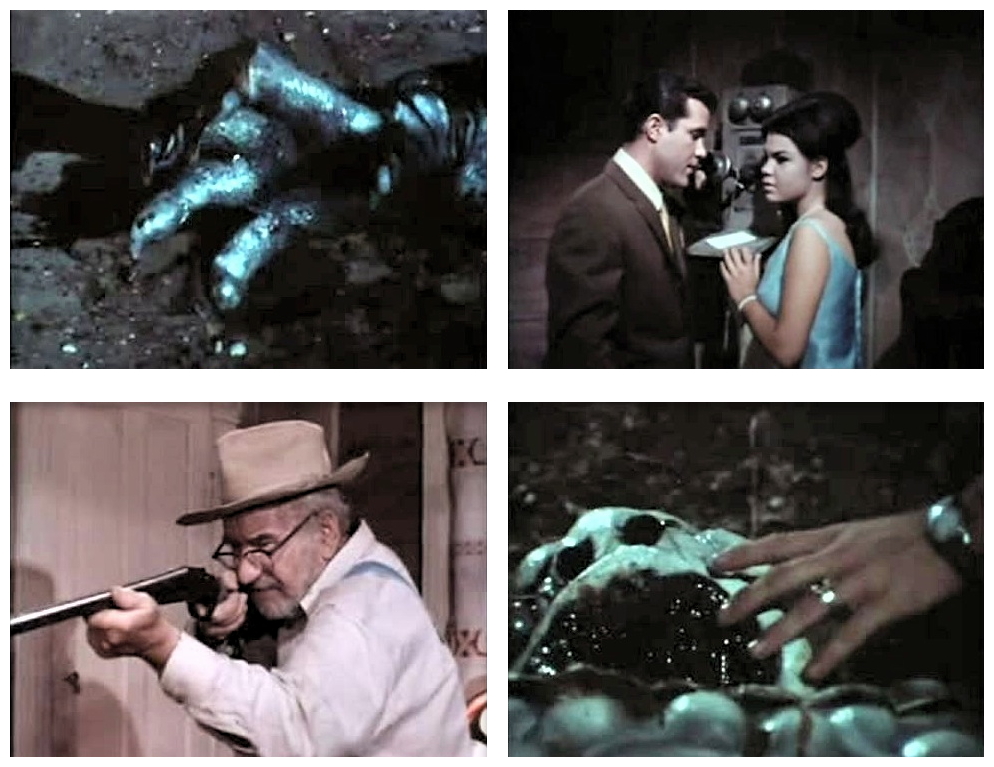 A small group of lumpy oozing aliens in rubbery costumes land on Earth and proceed to just kind of hang out in the woods for a while. The military knows they’ve landed, and they have their spaceship surrounded. Too bad there’s no one inside it. The local teenagers know what’s going on too, but no one believes them because, you know, they’re just kids. When a greasy drifter named Carl (Bill Peck) is accidentally killed by an Eye Creature, the aliens, acting out of self-preservation, pin the blame for the accidental killing on an innocent Earthling (the police attribute Carl’s death to heart failure as the result of alcohol poisoning. This is a holdover from the original film, in which the aliens inject their victims with fatal doses of alcohol, but this is never explained in the remake and remains unresolved). Clean-cut bad-boy Stan Kenton (John Ashley) is blamed for Carl’s death, but the teenagers all know the truth and decide to vanquish the slimy extraterrestrial enemies themselves! 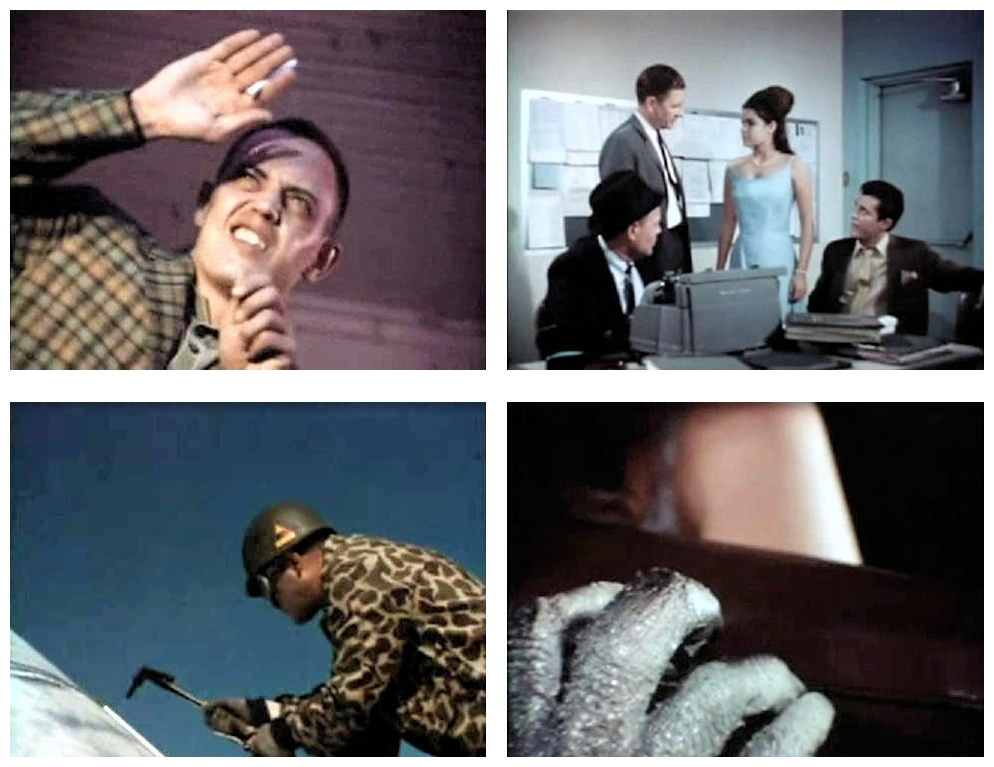 Author Paul Fairman published his short story The Cosmic Frame in May of 1955, which was adapted a couple of years later as Invasion Of The Saucer Men. Fairman was given proper credit in the original film but not so in The Eye Creatures. Fairman’s short story Deadly City (published 1953) was filmed under the title Target Earth (1954) about an alien invasion of Chicago and five characters in search of an exit. Stories adapted for television include the Times Square Playhouse episode Some Day They’ll Give Us Guns (1952) and The Twilight Zone episode People Are Alike All Over (1960). Lead actor John Ashley wisely retired from acting shortly after this and went on to become a rather successful producer, working on films like The Big Doll House (1971) and Apocalypse Now (1979), and popular TV shows like The A-Team and Walker Texas Ranger. 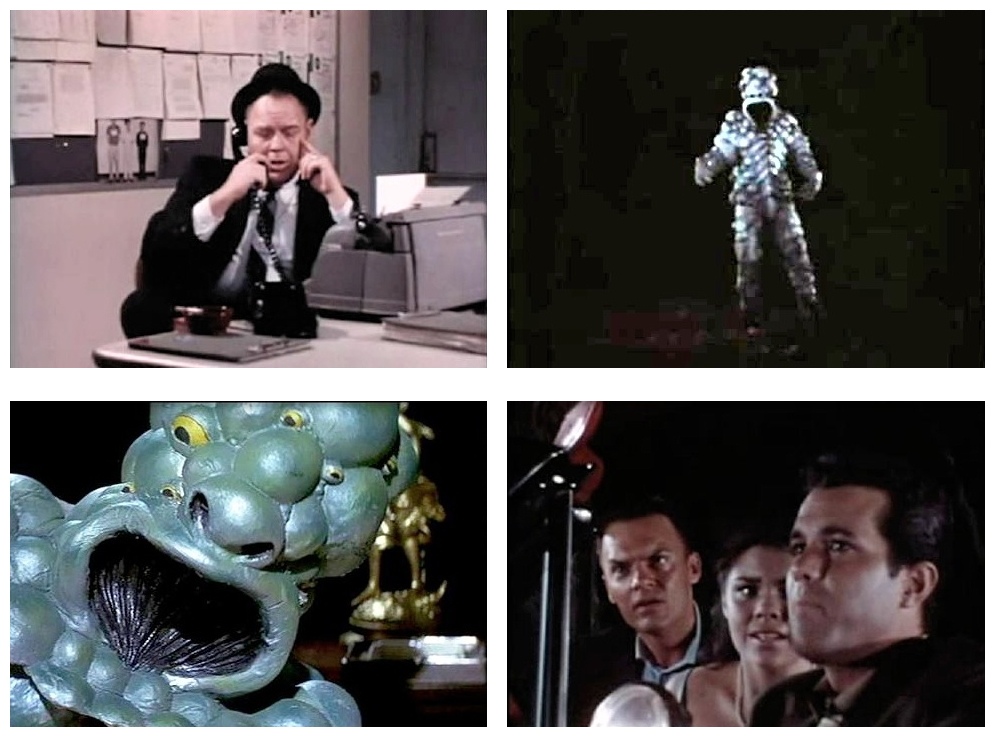 Along with his usual cost-cutting low-budget trickery, Buchanan also stole…I mean, borrowed the music from previous AIP productions composed by Les Baxter and Ronald Stein – Attack Of The Fifty-Foot Woman (1958), The Hypnotic Eye (1960), Beach Party (1963) – and shots of the alien spaceship landing were taken from Invaders From Mars (1953). And those, would you believe, are its good points. Bad points include:

* Zippers can be spotted on the back of the alien costumes.

* Day changes to night and back and forth in the same scene many times.

* During night shots one can clearly see deep shadows and stray sunbeams all over the place. 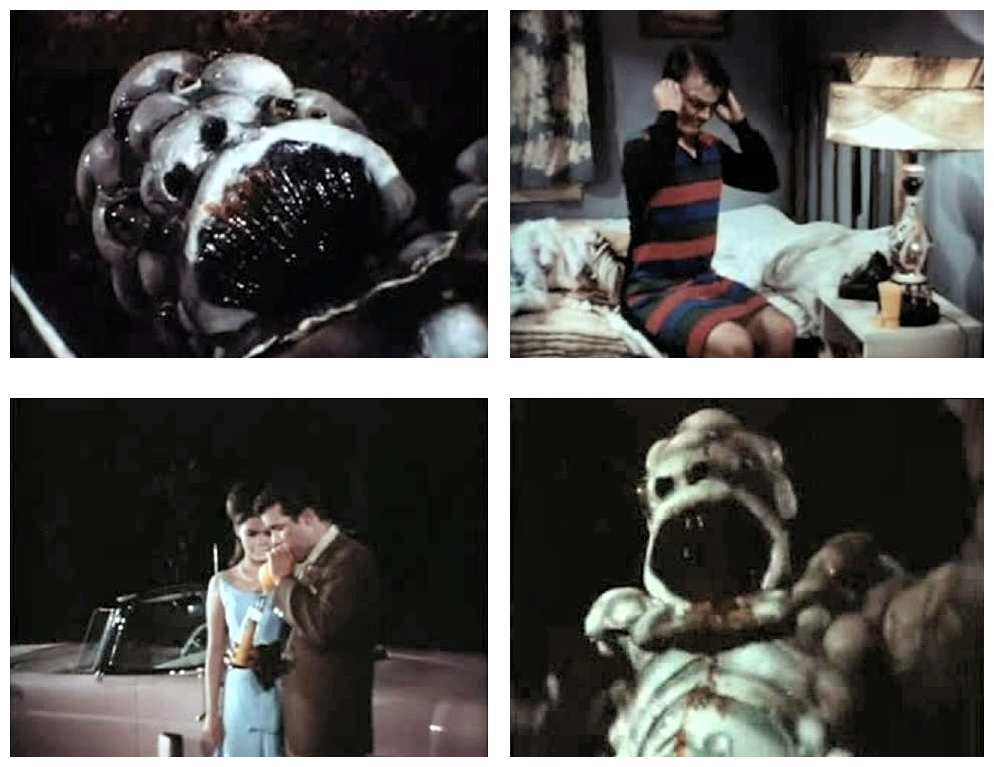 * The alien spaceship looks like a couple of hubcaps stuck together with a few Christmas lights.

* Arguably the most uniformly repulsive supporting cast imaginable, and only Susan emerges with a shred of decency.

* The severed hand in the car has a very obvious string tied around one of its digits being pulled to make the hand appear to move.

* Many of the aliens wear just the head of the costume with a black jumpsuit and sneakers (there were not enough full costumes for crowd scenes).

* The foul and sweaty Air Force soldiers who combat the evil extraterrestrials by watching a monitor, spying on necking teenagers and making smarmy comments.

* The aliens look like Styrofoam packing material instilling absolutely no sense of terror as they lumber about vomiting up blackberry jam and exploding into smoke when exposed to bright light.

Admittedly, it is these very elements that make The Eye Creatures so watchable, not unlike a train wreck or a road accident. Critic Dennis Schwartz hit the nail on its proverbial head when he wrote, “It is a film that can never go out of style because it is so bad that it never was in style.” Now that I’ve provided you suitable warning I’ll bid you farewell and look forward to your company next week when I have the opportunity to freeze the blood in your veins with more sickening horror to make your stomach turn and your flesh crawl in yet another fear-filled fang-fest for…Horror News! Toodles! 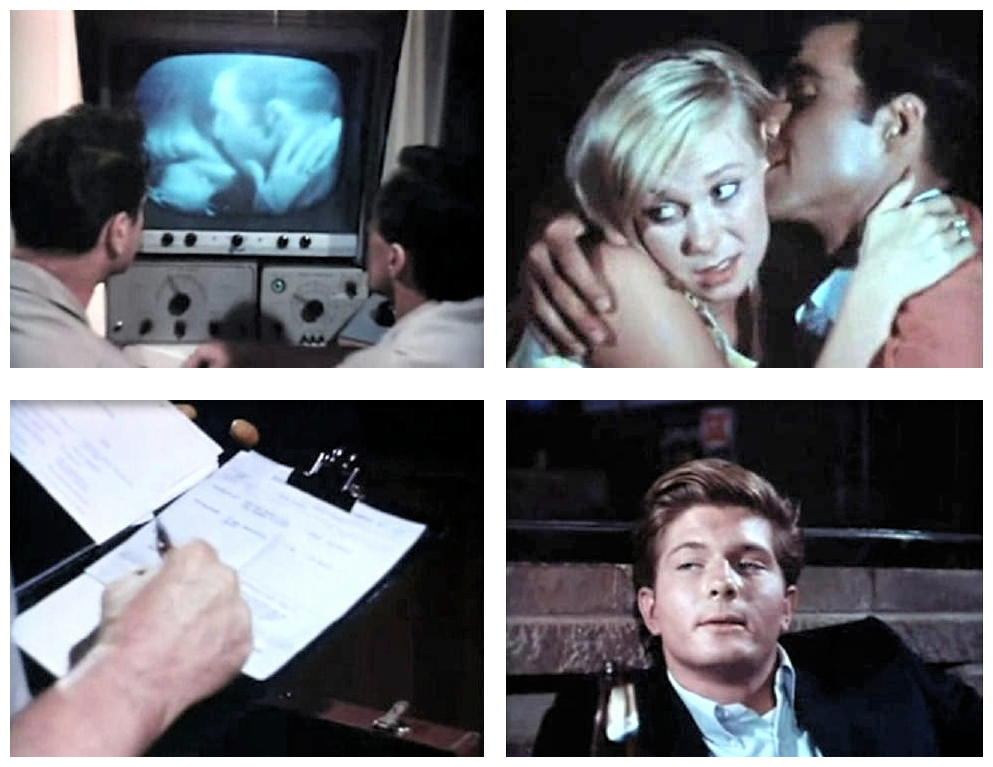 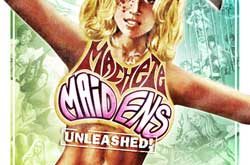