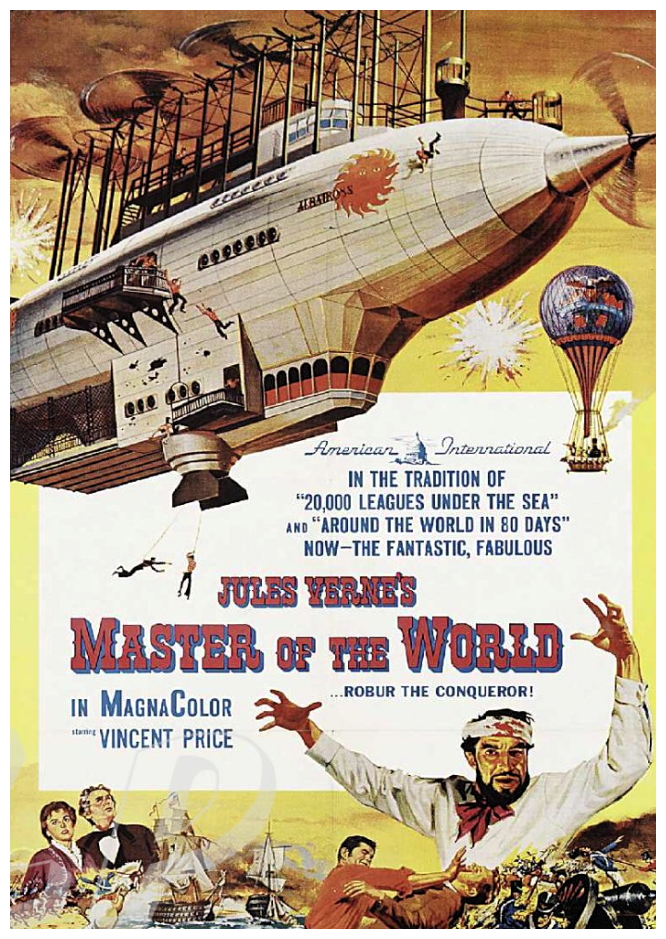 “In Morgantown Pennsylvania in 1868, the local residents hear a booming voice coming from the local mountain, the Great Eyrie. John Strock from the Department of the Interior is tasked with finding out just what is happening there and approaches Philip Evans for the use of his balloon which would allow him to view the mountain from air. Accompanied by Evans’ fiancée Dorothy Prudent and her father, they come under attack from rockets fired from inside the mountain. They are soon the prisoners of Captain Robur, a pacifist who is in command of the Albatross, a 150-foot-long airship. His mission in life is to stop all wars, even if he has to make war on nation states in order to achieve it.” (courtesy IMDB)

Many writers during the 19th century used existing technology as a basis for extrapolation. Edgar Allan Poe, for instance, along with Mary Shelley, helped to fuse science fiction with the Gothic, a development from which the genre has never fully escaped. But the first generally-recognised science fiction author was the Frenchman Jules Verne who, after writing a number of plays, began producing novels in the 1860s and kept up a prodigious output until his death in 1905. Much of his work dealt with marvellous machines or inventions that provide the means for exotic journeys of exploration but, whilst he was something of a visionary, Verne lacked that radical spark – a subversive way of looking at life and the universe – which marks the modern science fiction author. Verne was basically a conservative and while a few of his characters (like Captains Nemo and Robur) posed as outcasts of society, he himself was a pillar of the establishment and a good Catholic (I believe he’s still the only science fiction writer to be blessed by the Pope for his work). His attitude toward technology was ambiguous – he relished machines, as is evidenced by his long and loving descriptions of their workings but, as he grew older, he doubted mankind’s ability to control them. 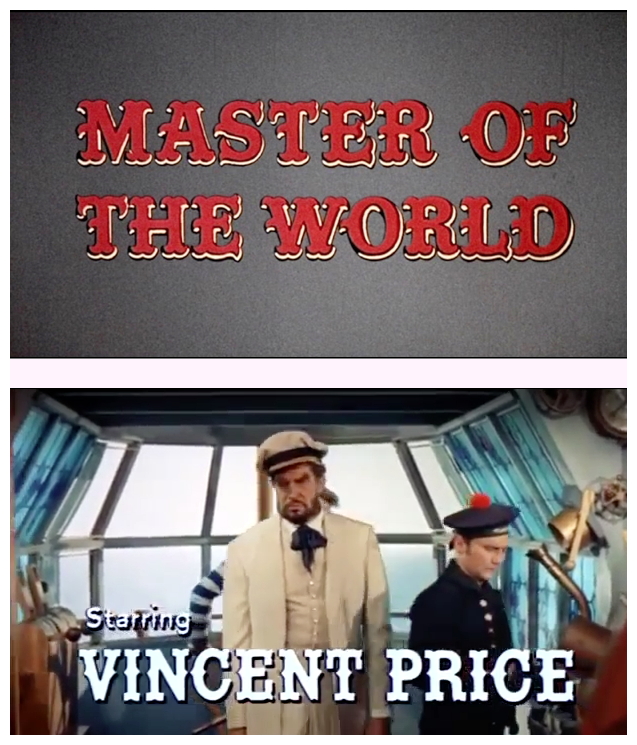 Significantly, in one of his last books published a year before his death, Captain Robur is destroyed by a bolt of lightning, presumably of divine origin, when he declares himself, “Master of the world!” Now we fast-forward half a century to meet the prolific Richard Matheson, a writer who based his career on exploring aspects of paranoia. His novel I Am Legend, which has been filmed at least three times, is possibly the ultimate paranoia story, though his script for Steven Spielberg‘s Duel (1971) comes a close second. Matheson was responsible for a record number of unforgettable genre hits which include The Incredible Shrinking Man (1957), The House Of Usher (1960), Pit And The Pendulum (1961), Burn Witch Burn (1962), Tales Of Terror (1962), The Raven (1963), Comedy Of Terrors (1963), The Devil Rides Out (1968), The Legend Of Hell House (1973), What Dreams May Come (1998), Real Steel (2011) as well as made-for-television movies like The Night Stalker (1972), The Night Strangler (1973) and Trilogy Of Terror (1975). Matheson also scripted sixteen immortal episodes of Rod Serling‘s original Twilight Zone series, and a sizeable percentage of The Simpsons Treehouse Of Horror stories are inspired by Matheson’s work. 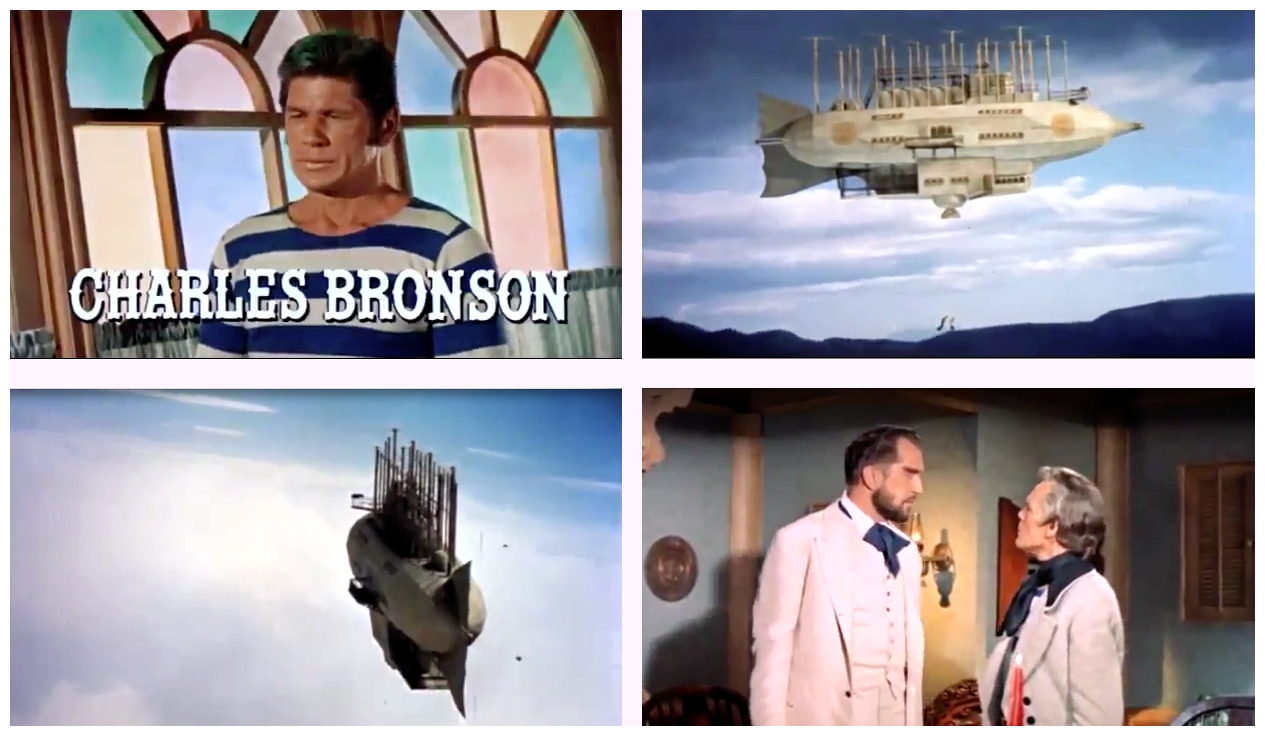 The unlikely writing team of Jules Verne and Richard Matheson collaborated, despite a gap of fifty years between their working lives, on the American International Pictures production of Master Of The World (1961). It was supposedly based on two of Verne’s novels – Clipper Of The Clouds (published 1886) and its sequel Master Of The World (published 1904) – but its plot seems to be based instead on Walt Disney‘s version of 20,000 Leagues Under The Sea (1954). Just like the Nemo character created by Earl Fenton and Richard Fleischer for the Disney film, Captain Robur (played by my old friend Vincent Price in one of his favourite roles ever) doesn’t bear much resemblance to Verne’s creation but is rather an anti-war fanatic who uses his flying machine, the Albatross, as a weapon against the nations of the world in an attempt to force them to renounce war (in the original story the Albatross could not only fly, but also travel on land like a tank, float like a ship, and go underwater like a submarine). 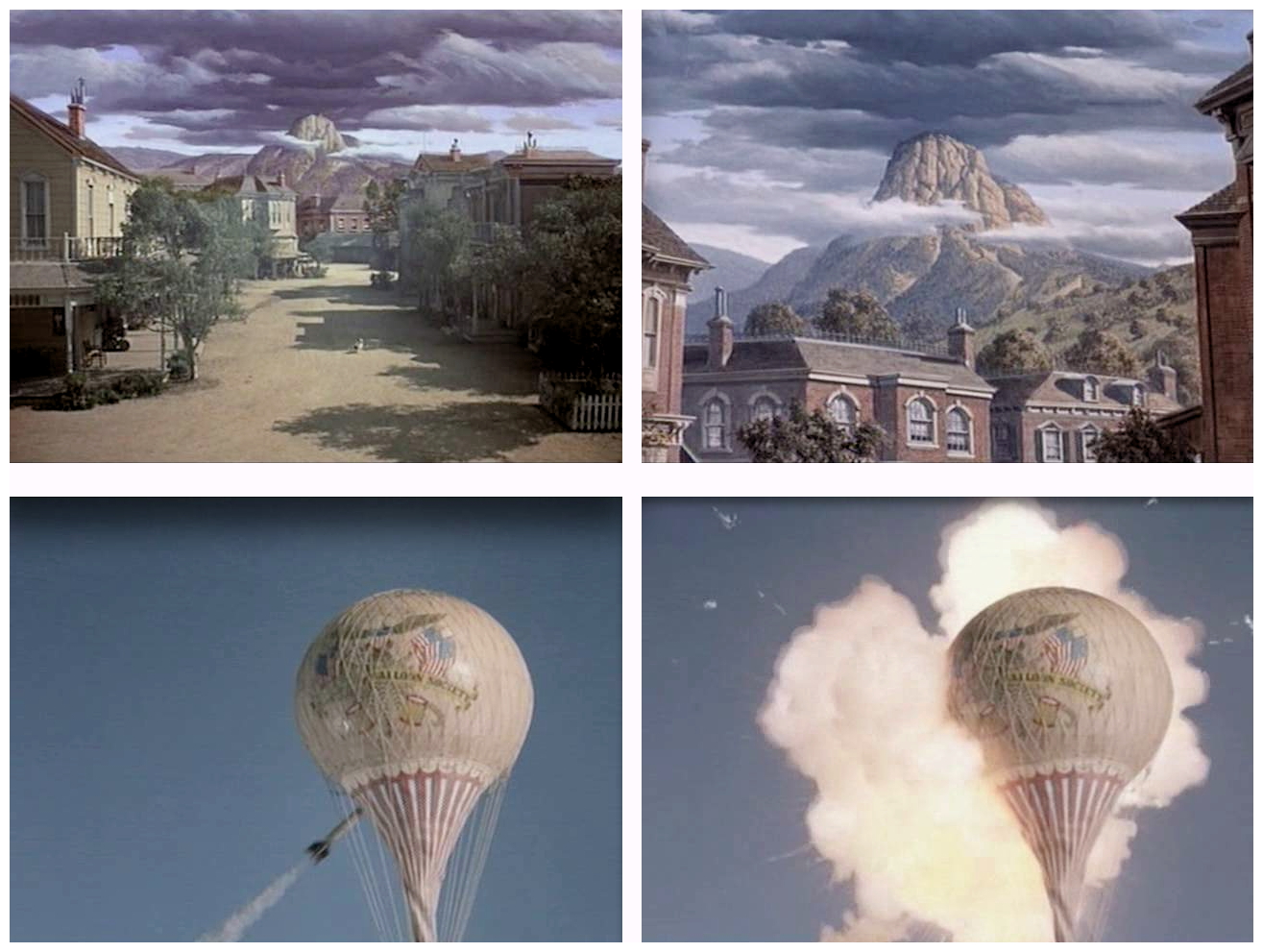 As in the Disney film, Master Of The World concerns a group of people captured by a mad genius who keeps them imprisoned in his mysterious vehicle while he travels the globe wreaking havoc and destruction. Finally Robur’s captives succeed in sabotaging the flying ship and make their escape just before it blows up and hurtles out of control across the sea in a death-dive, giving Vincent Price time to give his loyal (though doomed) crew a morale-boosting lecture along the same lines as the one James Mason delivered in the Disney film. The model of the Albatross is quite impressive, resembling an airship with a forest of propellors on top, but the special effects have an air of desperation about them. The effects team – Tim Barr, Wah Chang, Pat Dinga, Ray Mercer, Gene Warren – had to use every trick in the trade to stretch the available money, and this included using as much stock footage as possible. For instance, in one sequence the Albatross is supposed to be hovering over mid-19th-century London, but the shots of the city reveal the medieval skyline lifted directly out of Henry V (1944). Another example is the sea battle in which the Albatross attacks a fleet of black-and-white battleships in an otherwise colour movie. 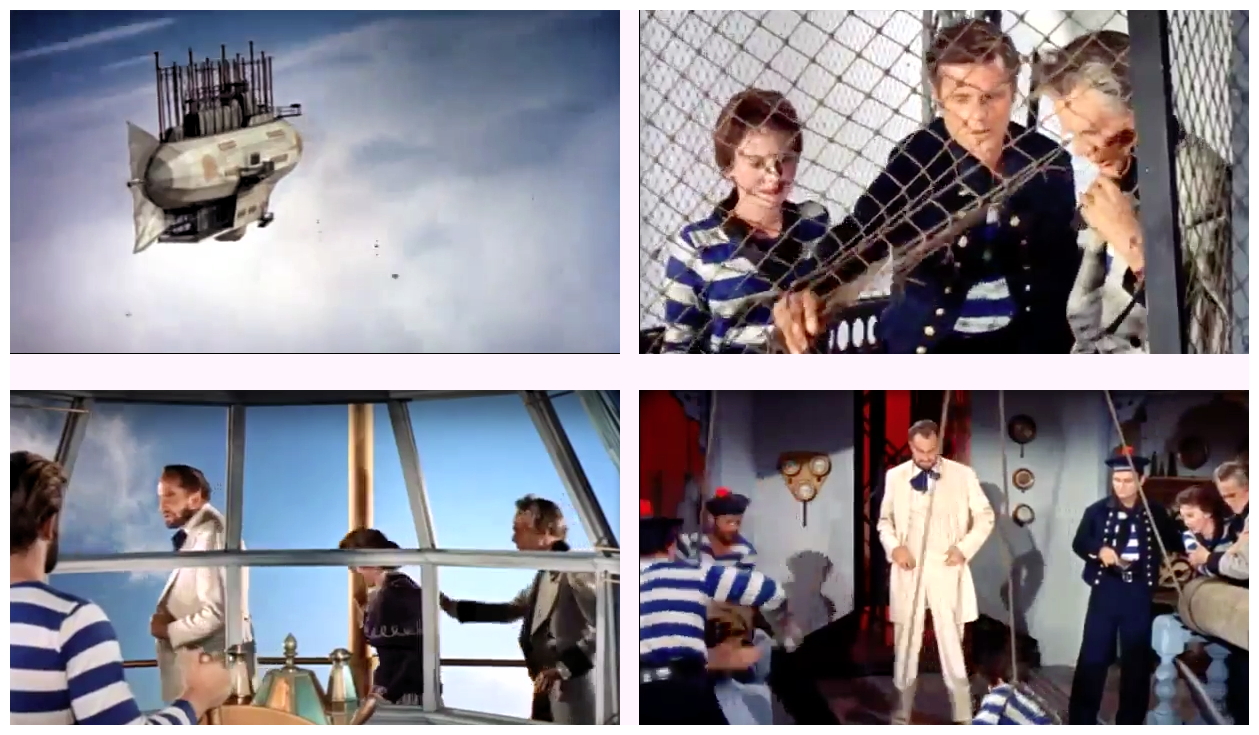 Although the end titles credit the song Master Of The World with music by Les Baxter, lyrics by Lenny Anderson and sung by Darryl Stevens, there is actually no song in the final film. It was replaced at the last minute by a haunting instrumental version but the credits remained unchanged. The somewhat awkward lyrics may contain some clue as to why the song was eliminated:

Supporting the scenery-chewing Vincent Price is David Frankham, Mary Webster, a young Charles Bronson, and an elderly Henry Hull, who was lured out of retirement by the promising script, but looks like he wishes he had stayed in bed. 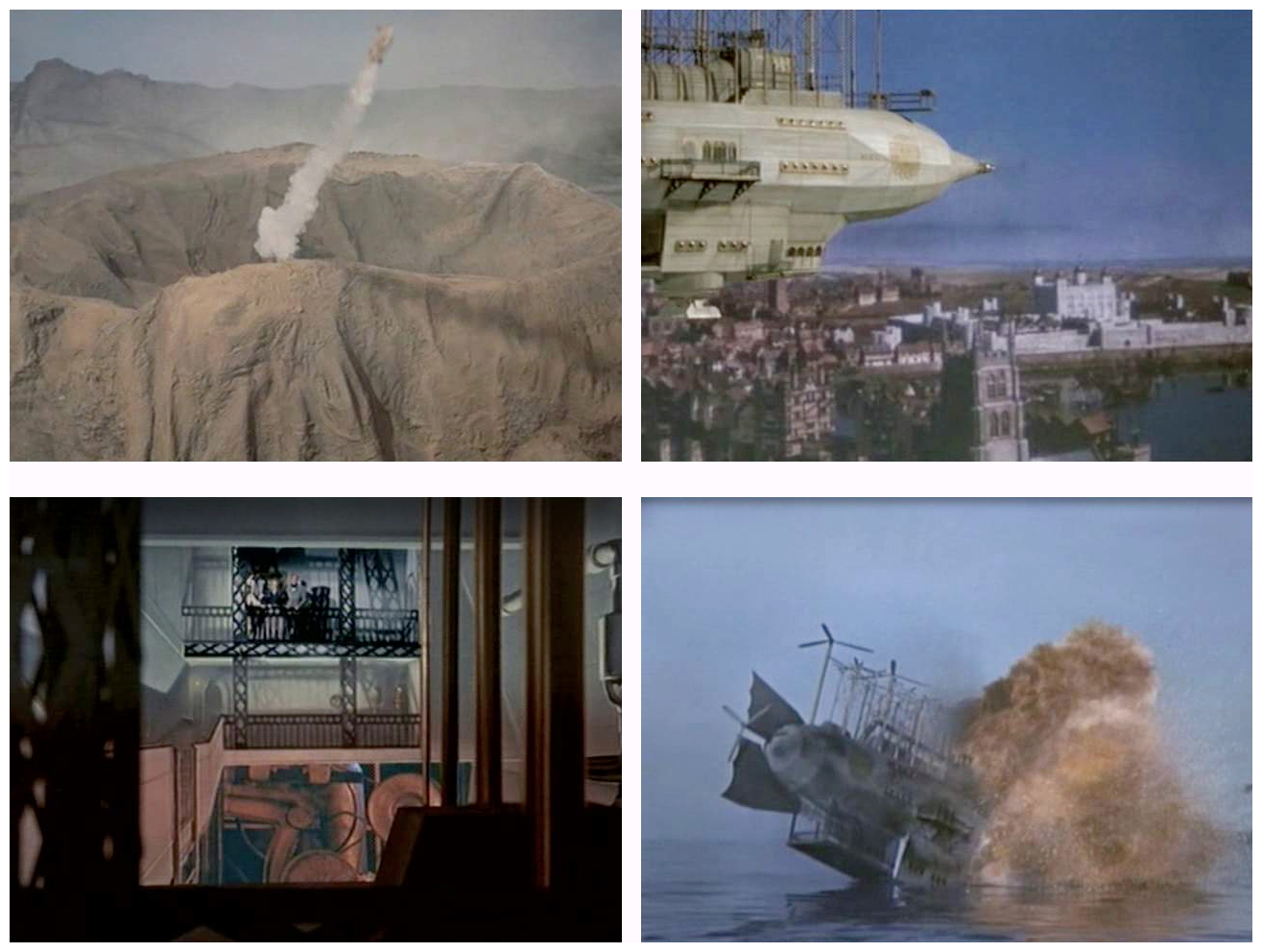 Despite the shonky special effects, children (and undemanding adults) should nevertheless enjoy the film, primarily due to the direction of William Witney, veteran of such exciting serials as The Drums Of Fu Manchu (1940), The Adventures Of Captain Marvel (1941), Spy Smasher (1942) and The Crimson Ghost (1946), who brings considerable verve to the proceedings. American International Pictures was so confident that Master Of The World would be a box-office success, a sequel entitled Stratofin was considered, with pre-production artwork completed and a model of a new airship, the Terror, was built. Unfortunately, the project was shelved indefinitely, possibly due to the way the filmmakers combined Verne’s two original novels, which would have resulted in some serious continuity problems. That very same year Irwin Allen, the last of the Hollywood Moguls, made his own version of 20,000 Leagues Under The Sea and called it Voyage To The Bottom Of The Sea (1961), but that’s another story for another time. Now it’s time to politely ask you to join me next week when I’ll have the opportunity to expose the very tenderest parts of your body to another awkwardly-probing journey through those damnable dank dells of…Horror News! Toodles! 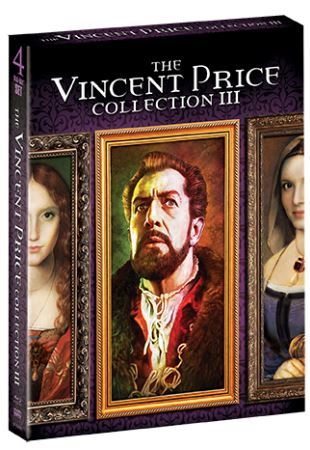 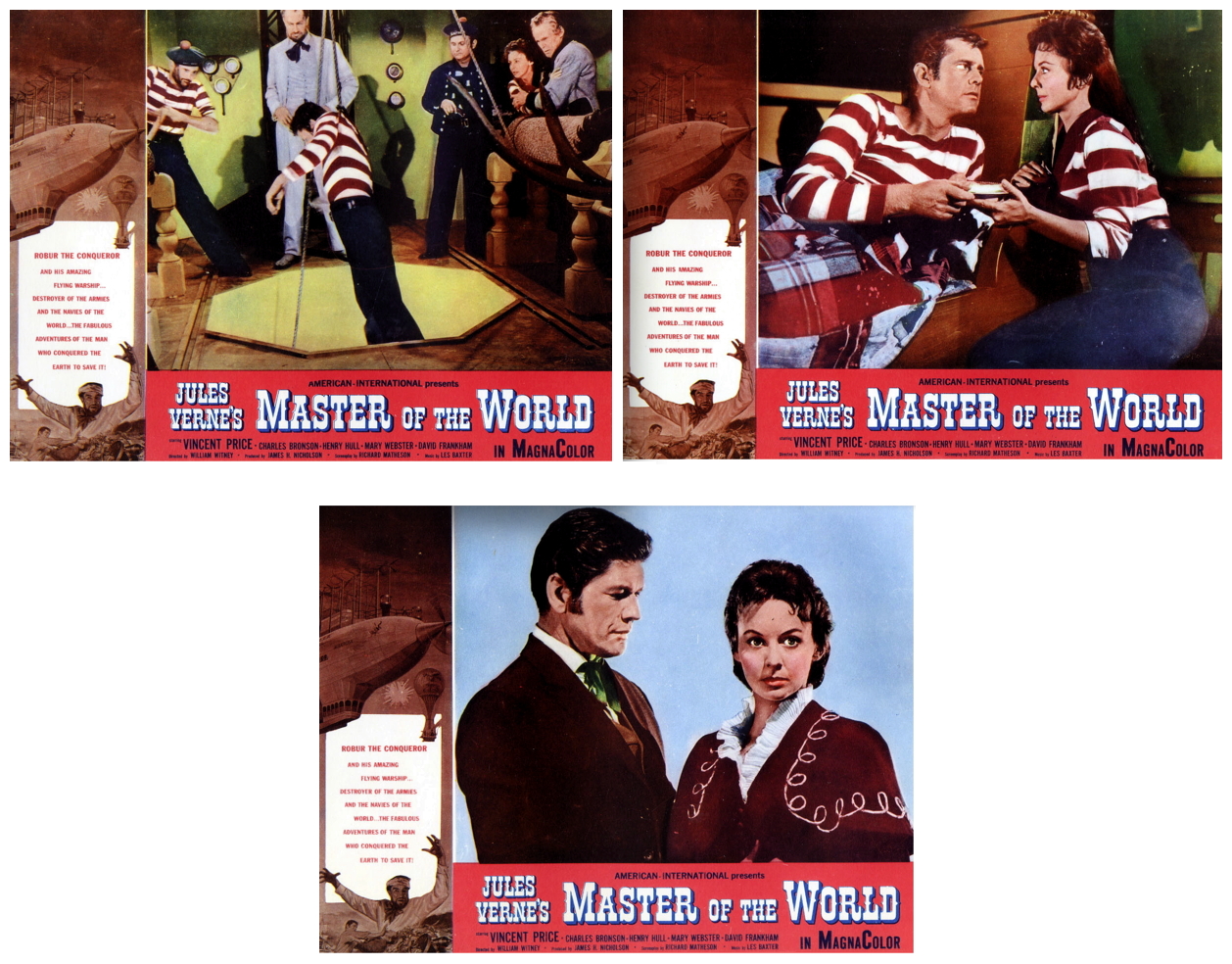