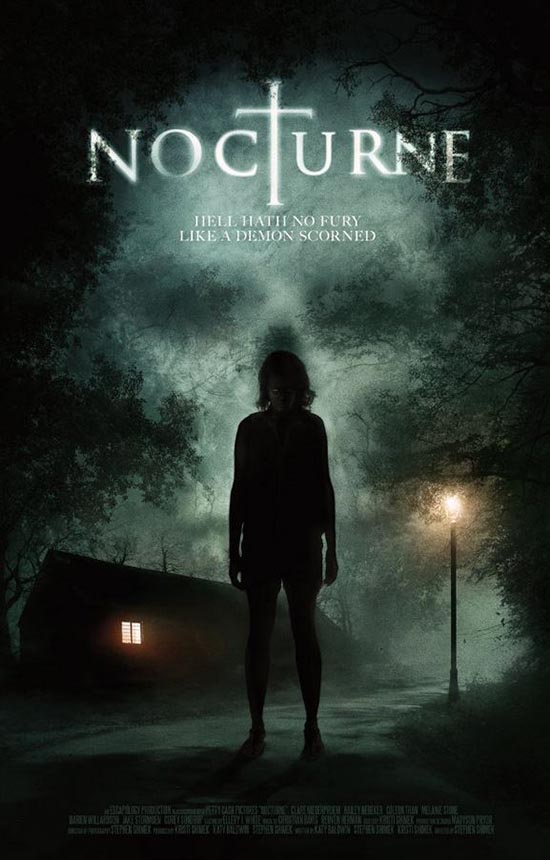 A girl running from her past is forced to confront her future when her friends perform an impromptu seance. Dirty secrets are revealed and an uninvited guest joins the party.

Alfred Hitchcock defined suspense perfectly.  In his famous analogy, he talks about a scene wherein a group of people are sitting around a table, talking, and without warning a bomb goes off under the table.  That was surprise.  Suspense, the great man said, was letting the audience know in advance that there’s a bomb under the table.  The filmmakers behind Nocturne understand this lesson very well.

The film begins with a cold open (or is it a flash forward?) of a young woman named Jo (Clare Niederpruem).  She is having a nervous breakdown in her car.  The next scene after the opening credits is Jo driving up to her friends’ house for a party.  In a very effective opening scene, we meet all the partygoers.  There’s the open-hearted Maren (Hailey Nebeker), her goofy boyfriend Liam, the superficial but sweet couple Vi and Isaac, and the prankster Gabe (Jake Stormoen).  All the characters are established through an entertaining scene where Gabe performs a card trick. We learn everything we need to know about the characters without feeling like it’s an exposition scene.  All the while, Jo is distracted and nervous.  Her phone is lighting up with a ton of text messages.  What could be bothering her?  Does she know something the rest of the group doesn’t?  Finally, in order to prove a point about how silly superstition is, Gabe performs a seance.  This will turn out to be a bad idea.

That description does not do justice to the film because it’s not the plot that sets Nocturne apart.  It’s the execution.  It all starts with the script, written by director Stephen Shimek with Katy Baldwin and Kristi Shimek.  There isn’t a piece of fat on the thing.  Every scene is important and well written.  There are no examples of characters saying the obvious.  No dumb decision making to advance the plot.  No filler to drag out the run time.  The character are all given time to breath.  They have internal lives.  They have hopes and dreams and people that will miss them if they die.  You worry about them, and we the audience know there’s a bomb under the table.

And then there’s the acting.  There isn’t a bad performance to be had.  Ms. Nebeker and Mr. Stormoen deserve special credit.  She has maybe the most interesting character arc (without giving anything away).  Mr. Stormoen does an amazing job of being at various times “the storyteller,” “trickster,” and bad guy while still having the audience’s sympathy.  Melanie Stone as Vi also deserves a round of applause.  She’s goes from ditsy eye-candy to heartbreaking effortlessly.

The use of effects is also well done.  They are subtle and effective.  Mr. Shimek, who has a background in special effects, could have used this film as an opportunity to make a glorified demo reel.  He does not.  The effects all serve the story.

The soundtrack keeps it all together.  Composed by Christian Davis and Reuven Herman, it is both ever-present and slow building.  This film, as I said, is suspenseful.  It also creates a visceral feeling of dread.  The score gets a lot of the credit for that.

Even the things that seemed like liabilities, at first, help make the movie effective.  The cinematography and set design are very naturalistic.  At first, that seemed somewhat bland and uninspired.  However, that realistic approach makes it more nerve racking.  These are real people in the real world, and they are in danger.  A more stylized approach would have killed the empathy we have for the characters, and made the supernatural elements seem silly.  Also, Ms. Niederpruem didn’t seem like the right fit for the character of Jo at first, but by film’s end, you will realize she was the best choice for the part.

In the end, what makes this film so good is the attention to detail and the respect it has for the characters and story.  Nocturne takes death seriously.   It’s a shame more horror movies don’t do the same.