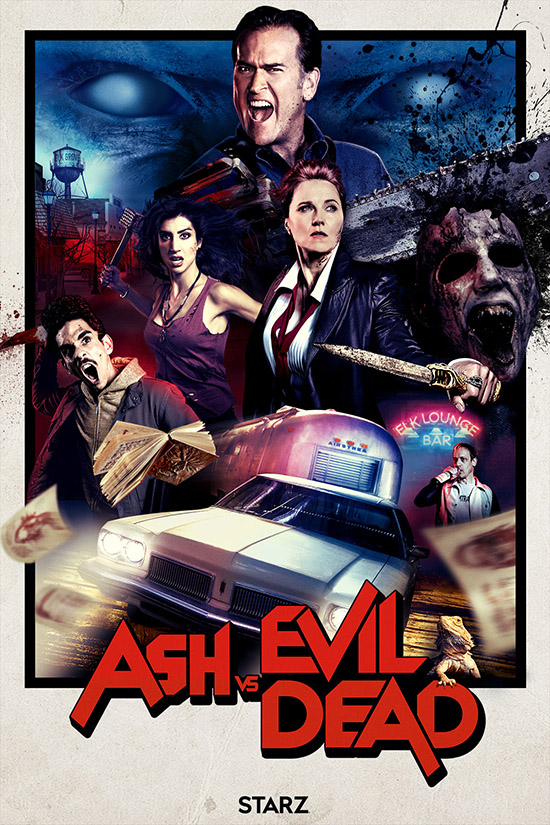 Ash has spent the last 30 years avoiding responsibility, maturity and the terrors of the Evil Dead until a Deadite plague threatens to destroy all of mankind and Ash becomes mankind’s only hope.

Ash and the gang complete another season in this Starz network series. If you haven’t checked out last season’s review of “Ash VS Evil Dead” Make sure and hop on over there first.

Season 2 completes its second season run with another 10 episodes of whacked out madness. To bring folks up to speed, after a successful first season, Ash and the gang were renewed for a season 2 which premiered in October of 2016. As of today, we have received word that their will definitely be a 3rd season promising to keep the fans busy with more Evil Dead mayhem!

Moving onto season 2, if you thought you’ve scene everything last season then you’re in for a surprise. Season 2 contains some of the most bizarre mind bending slapstick horror to hit the screen in ages. In fact this series has a knack for truly being inventive by simply breaking the laws of physics and reality every chance it gets.

If you are new to the series, then before you read any further, run out and purchase season 1 (it’s well worth it, trust me!) only proceeding “then” onto season 2. If you haven’t seen season 2 yet…… then maybe you’ll want to avoid a few of the SPOILERS ahead. If your right on track then glad to know we’re in good company as we comment on this most twisted wonderful series!

Ash and his gang which consists of: Ray Santiago as Pablo Simon Bolivar, Lucy Lawless as Ruby Knowby and Dana DeLorenzo as Kelly Maxwell are not your typical demon-fighting posse. Ruby who is cited as being immortal now has been on a life long quest to hunt and destroy the source of all this group’s issues, the “Necronomicon Ex-Mortis” aka Book of the Dead. The book contains spells and rituals designed to power the Kandarian Demon that erects the deadites, a minion of underworld demons often crossing over into Ash’s world with the goal of killing everything in sight.

Kelly and Pablo (who we now find on vacation with Ash living in Jacksonville, FL) are pulled out of their time-off excursion to battle more supernatural evil. This sort of “call to action” journey has been plaguing Ash his whole life who accidentally invoked the demon of the Book of the Dead back in the 80’s. 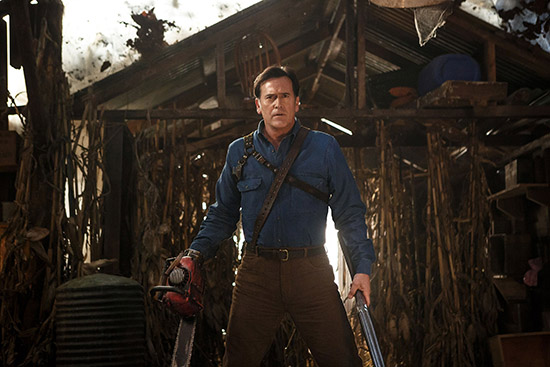 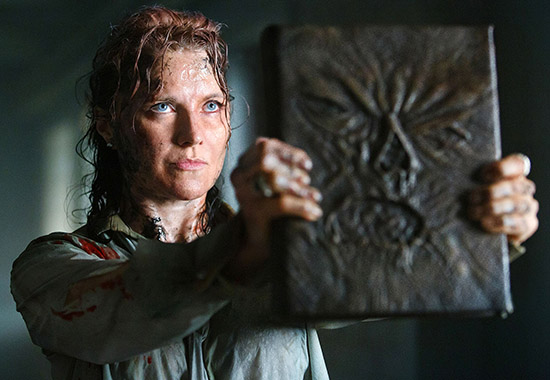 Editor’s special note:
Thank you Raimi for being involved and allowing old “Evil Dead footage/properties to be included in this series!

In pursuit of the book they have to eliminate Ruby’s demon offspring, a possessed Delta (Ash’s car), and develop a plan to eliminate a powerful new demon who has crossed over.

As Ash and company make their way from town to town, the team often runs into variations of possessions fueled by this very book. Though if that is where it all ended, it truly wouldn’t be the world of Ash and the Evil Dead. In season 2, we come into contact with objects, vehicles, and humans possessed to various degrees by this unstoppable source of evil. If that wasn’t enough how about a bloody battle to the death with a hand puppet? 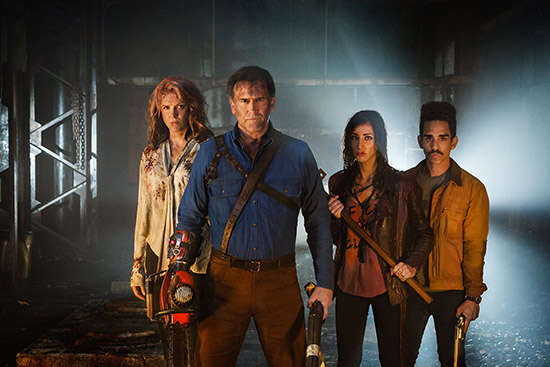 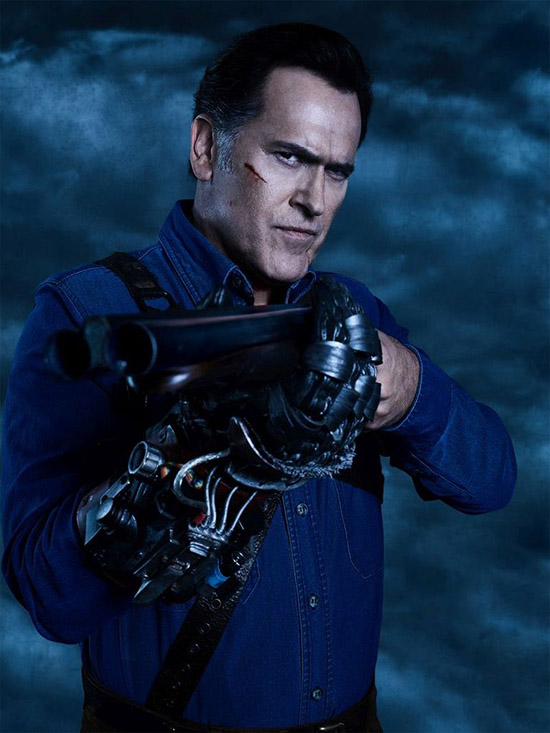 Each episode offers some sort of bloodcurdling battle usually ending in decapitation, dismemberment, or form of macabre execution. Though the charm of this series is that Ash William’s often sarcastic and lackadaisical attitude provides constant comic relief making for a gory but hilarious week to week TV series. The show’s ability to ignore the restraints of censorship and ratings provides a base for delivering a highly entertaining smattering of horrific special fx, practical fx gags, and content often never seen in a TV series.

Season 2 also introduces the emergence of an ancient powerful demon named Baal who crosses over with the intent of creating all sorts of physiological chaos for the group. We find that Ruby even had a “thing” with this very demon back in the day (who is later revealed as her former ex husband). 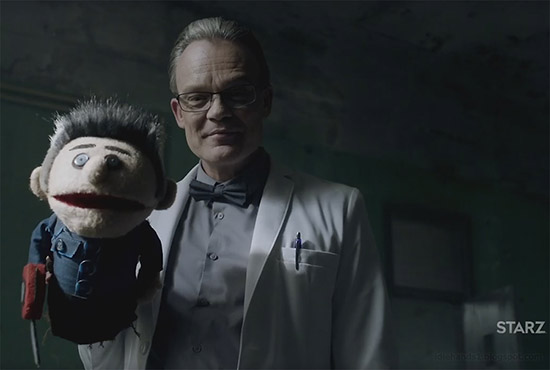 As the group tracks down the Book, they find themselves in Ash’s old town where he is reunited with his father Brock Williams (Lee Majors) (who he hasn’t seen in 30 years). We also learn of Ash’s often mocked reputation left over in a unappreciative town of Elk Grove who refer to him as “Ashy Slashy”, a nickname left over from his younger years and legacy.

Enough lunacy for one series? We haven’t even scratched the surface here!!!

How bout Ash traveling thru time to save his buddy by traveling back to the source of his first encounter with the Book of the Dead? (yep early Evil Dead era stuff!) How bout getting infected evil in his leg, stabbing it to suck out the poison, and then swallowing a mixture of hot sauce and cinnamon to draw out the evil parasite? Yep, that’s just a taste as Ash and his band of warriors take on demon after demon twisting the throes of reality in quest of stamping out evil forever! 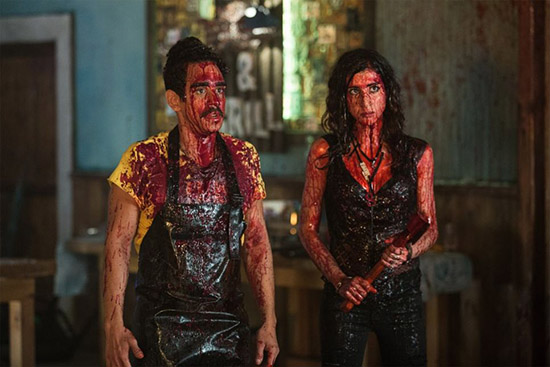 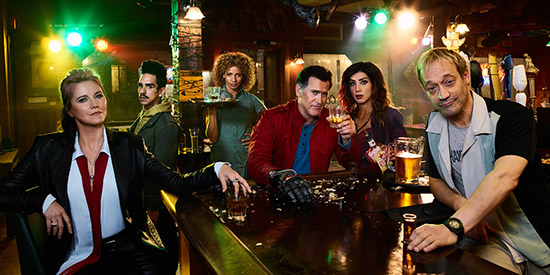 At the end of the day, it’s simply entertaining stuff that constantly reinvents itself episode to asking the question, what will the production team think up next????

Without spoiling things, season 2 does manage to wrap up its season nicely in the “event” that there wasn’t going to be a season 3. 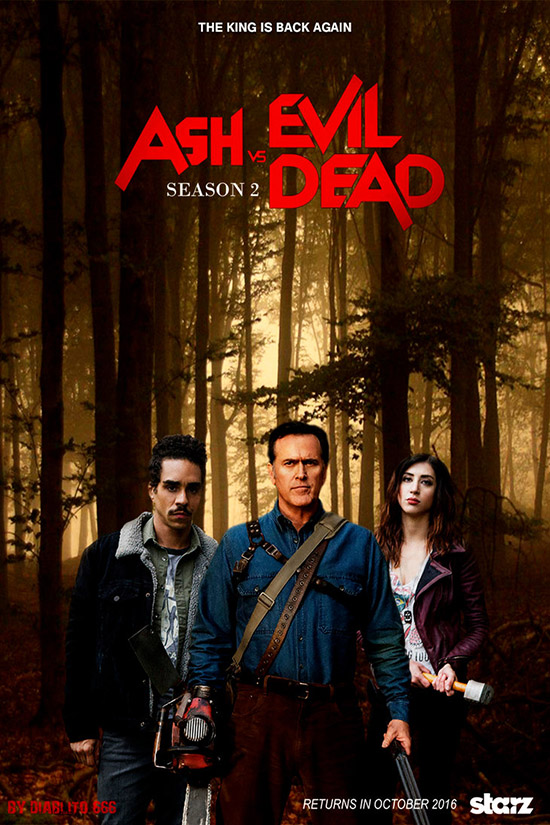 Season 2, like its previous season, is chock full of zany insanity that promises a constant stream of horror-meets-comedy entertainment. With season 3 on schedule we can only hope that the show continues with the same passion that it started with. “Ash vs Evil Dead – season 2” is highly original and well worth the watch……so make sure and grab your season 2 bluray release to keep the franchise going!

In closing, I simply love this series! In my opinion its one the best things going on in television right now.