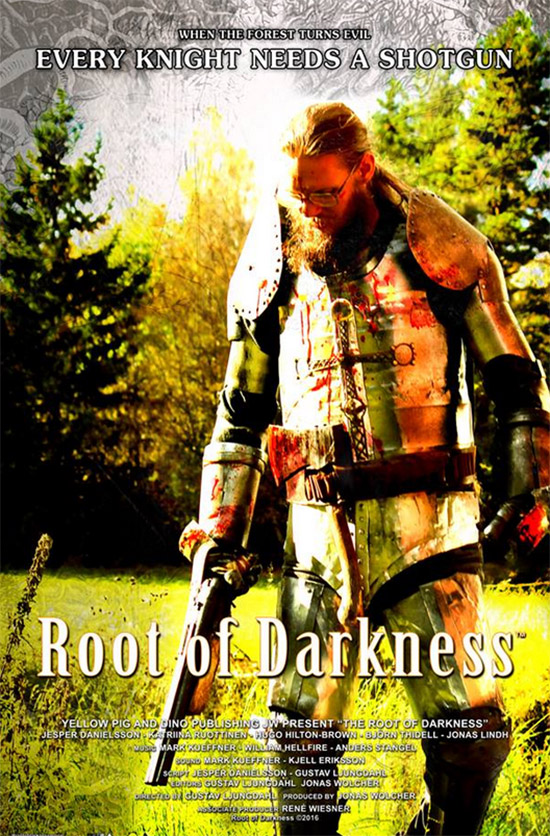 Erland is about to celebrate his 50th birthday. His wife Greta has invited some friends over to their newly bought cabin for a party. Erland is not happy about the upcoming party especially when some of the guests are relatives to Greta which he doesn’t like. The day before the party hell falls down a dried well and finds a box containing some old artifacts. Artifacts of evilness which is going to change his life forever.

It is with great pleasure that we can proclaim that creature features are very much alive and well in Sweden. Case in point: Dino Publishing JW, a film production and distribution studio run by Jonas Wolcher (director of Die Zombiejager and Cannibal Fog) and company, has made it their mission to bring low budget horror, sci-fi, and action films to the people. One of those films is Root of Darkness, written and directed by Gustav Ljungdahl and Jesper Danielsson (they also teamed up to make Kill Team and Jaws of the Shark). A variation on the Evil Dead/cabin in the woods plot, Ljungdahl and Danielsson put enough original content in here to make sure it is its own thing, and they put enough of themselves into it to make it a fun time for the audience. 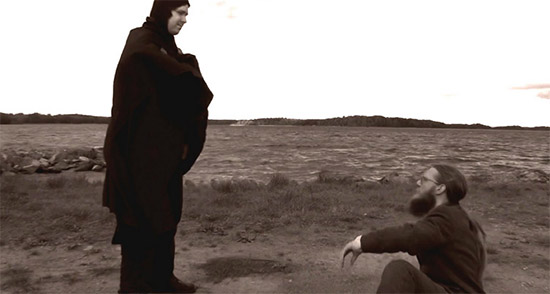 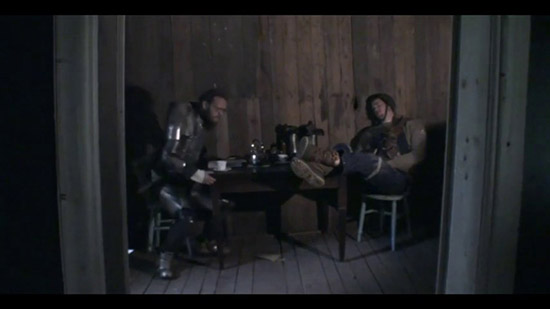 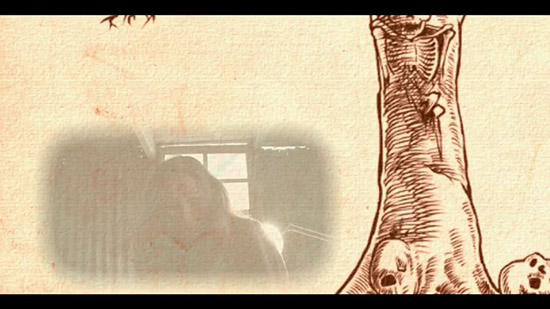 Erland (played by Danielsson) is about to turn 50, and so he and his wife, Greta (Katriina Ruottinen), have planned a getaway to their cabin out in the woods, where a few friends will meet up with them to celebrate. Erland is a bit stuffy, kind of rude, but hungry for knowledge, so he packs a bunch of books, while Greta just wants him to relax and enjoy their time away together. After problems with the water pipes causes Erland to ask their only neighbor, Leroy (Hugo Hilton-Brown), for help, the two accidentally discover a deep hole under the cabin (which is explained a bit in the opening minutes of the film), and a box containing what looks like a piece of tree root. Things happen that cause the root to grow, and when Greta steps on it, she begins to transform into something far more dangerous than a wife who is excited to enjoy a peaceful vacation.

The first thing that really stands out in Root of Darkness is the fact that the filmmakers weren’t afraid to embrace their very low budget and work with it and around it to still tell the story they wanted to tell. While the sets and effects are very low budget, the story around them is well put together, with enough humor to keep things upbeat and enough terror to keep the horror fans interested. The design of the creatures is cheaply made, but more importantly it’s original and fun. For the most part, the filmmakers keep the creatures just off screen, only really showing them (or parts of them) when absolutely necessary. This works twofold – it not only avoids unnecessary attention being drawn to the budgetary restraints, but by not seeing the creatures constantly, it helps build a little bit of suspense. And hey, if nothing else we can all appreciate the fact that they opted to work with practical effects over CGI. 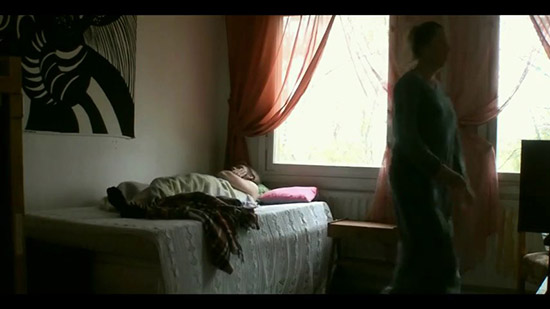 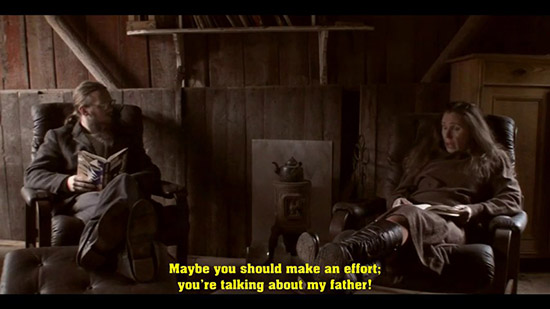 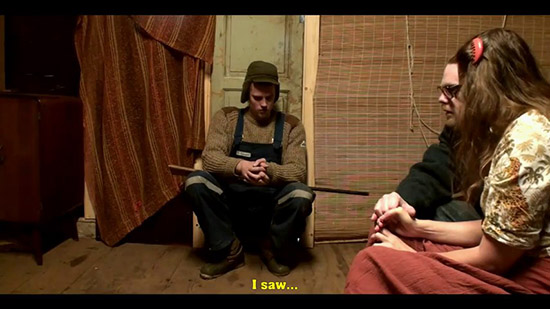 The acting in Root of Darkness is certainly not perfect, but most of the cast are first-timers who can hardly be blamed for not putting on Oscar-worthy performances. There is plenty of blood and gore, as you might expect from a film of this kind. The music is done by William Hellfire (director of Upsidedown Cross, Duck! The Carbine High Massacre, and so many more) and Anders Stangel, while the score was composed by Mark Kueffner, who also provided music for Phil Stevens’ Flowers and Lung II. The real strong point for this film is the writing. The story moves along at a good pace, avoiding the easy to fall into trap of low budget horror films where large chunks of the story are clearly just filler to cushion the runtime. And it is funny, whether we’re talking Erland’s Berman-esque dream meetings with Death (played by Ljungdahl) or his armoring up Evil Dead homage. At no point does the film become not fun or lose its edge, and that’s a major accomplishment. 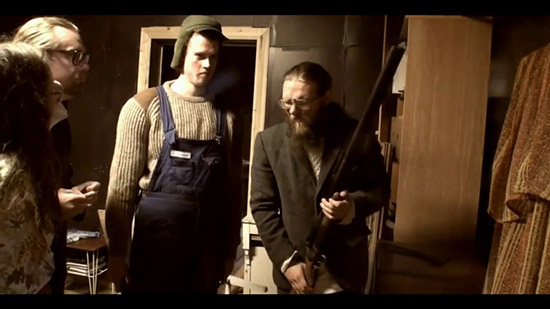 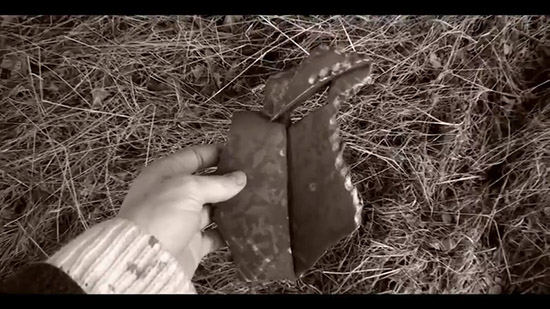 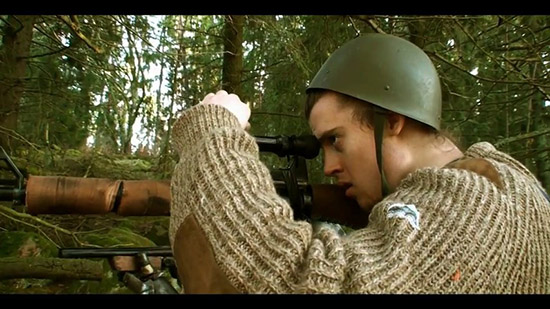 Root of Darkness is a fun horror film from Sweden that exemplifies everything that is good about low budget, independent filmmaking: well-crafted and fun story, creative effects and creature creations, and a lot of heart. It’s nice to see a movie like this getting a chance to be seen by a wider audience. Not only has Dino Publishing JW put out a special collector’s edition that includes a ton of extras and comes in a limited box, but Ron Bonk’s SRS Cinema has also released a blu-ray edition that comes with a couple other films as well. I look forward to more films from this filmmaking team, as Root of Darkness was an excellent introduction to their work.