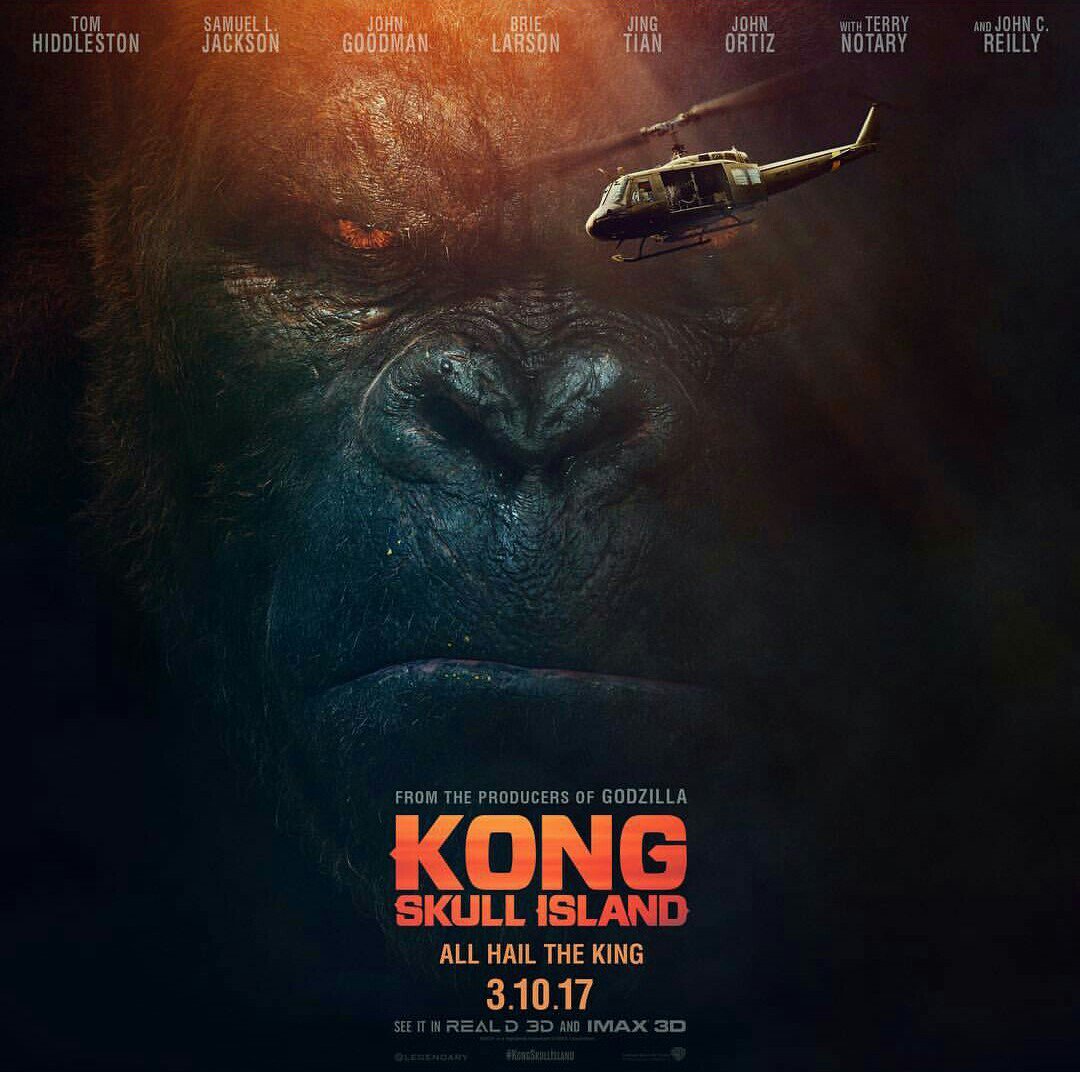 A team of scientists, soldiers and adventurers unites to explore an uncharted island in the Pacific. Cut off from everything they know, the team ventures into the domain of the mighty Kong. As their mission becomes one of survival, they must fight to escape a primal Eden.

A few year ago, we got a much anticipated Godzilla reboot. One that was supposed to return the venerated character to his former glory. And while the film did a good enough job of portraying the big green lug, audiences complained that they really didn’t get to see as much of him as was anticipated. Indeed, he was essentially a supporting player in his own film! The makers of the new film, Kong: Skull Island, have their own ideas on how to reintroduce a well loved character with tons of personality, you make him (or her) the center of attention right from the beginning. And that’s pretty much exactly what happens here, but despite the amount of actual screen time Kong gets, is this film worth sitting through?

Bill Randa (John Goodman) is in Washington with his assistant, Houston Brooks (Corey Hawkins), looking for some funding in order to attempt a survey mission on newly discovered Skull Island. But senator Willis (Richard Jenkins) is dead set against giving Randa any more money for anything. Luckily for Randa, Brooks convinces Willis that if they don’t get to the island first, the Russians might. If that happens, whatever valuable resources/information that’s available on the island becomes Russian property – and the USA just can’t let that happen. 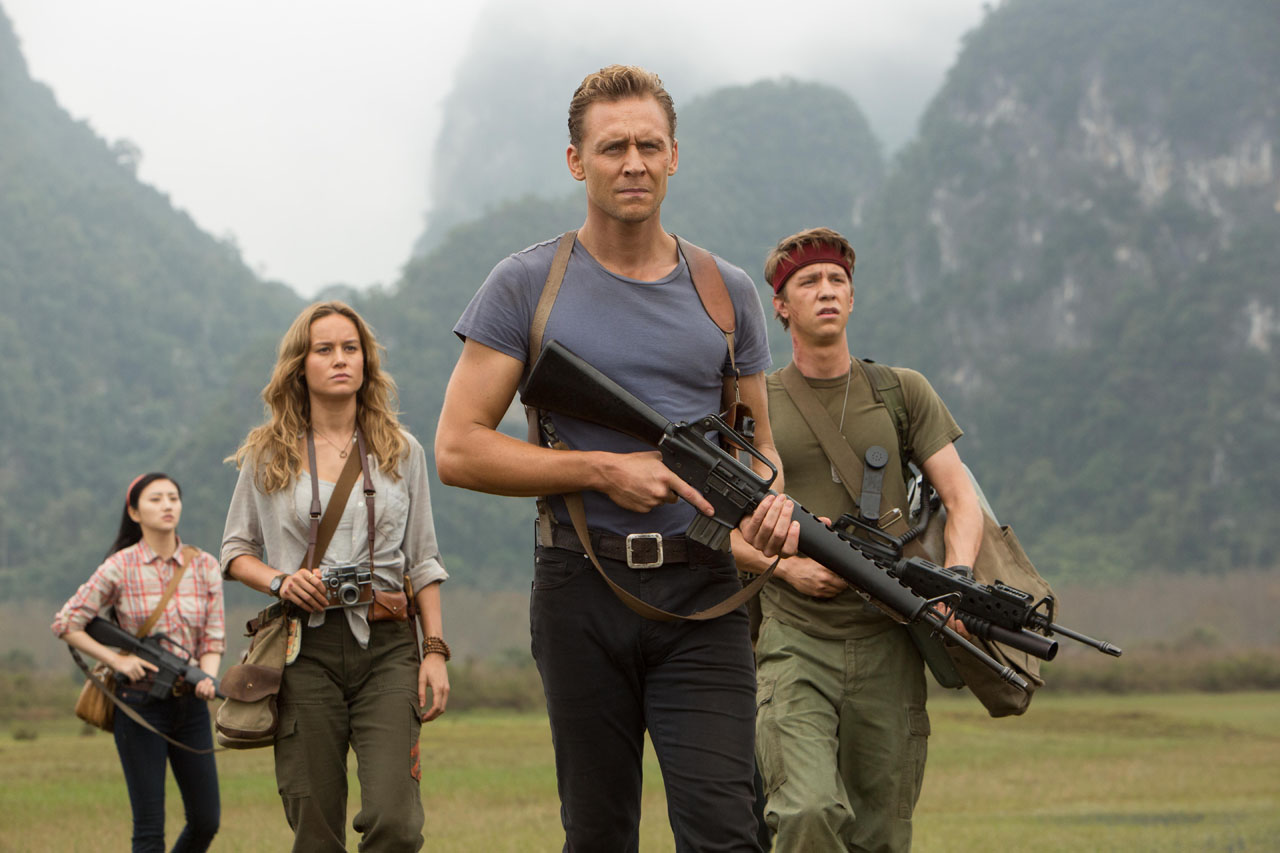 So Randa gets his funding, but he has one more request: He needs a military escort. So Colonel Preston Packard (Samuel L. Jackson) and his crew are chosen to provide an armed escort to the island. In addition, Randa brings along a guide in the form of James Conrad (Tom Hiddleston), a former British special forces agent. He also hires photojournalist Mason Weaver (Brie Larson), and biologist San Lin (Jing Tian) to complete his crew. So with nearly the entire cast introduced, what’s left to do but bring on the big guy? 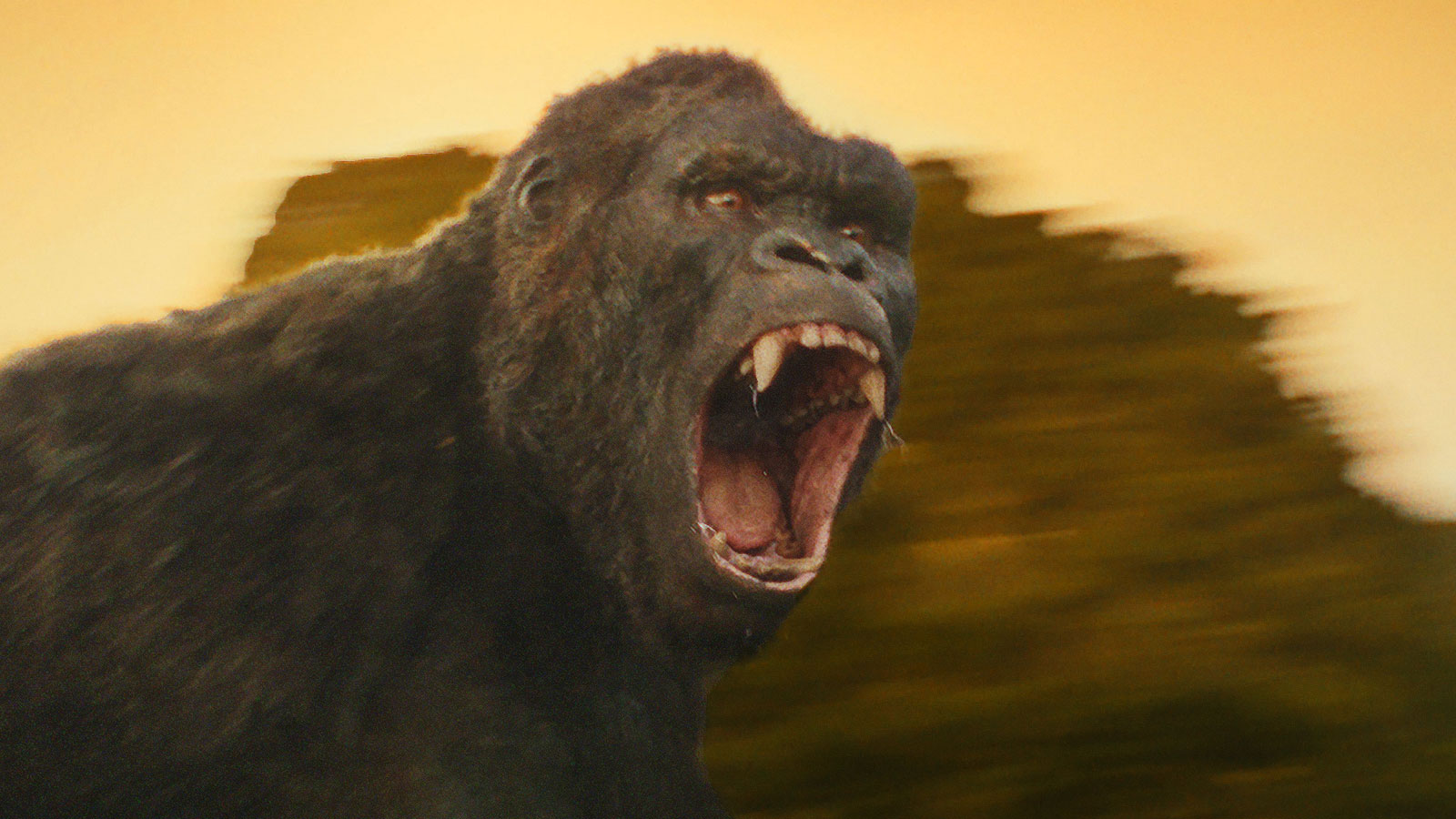 And that’s what director Jordan Vogt-Roberts does. Kong makes a quick pre-credits appearance to whet everyone’s appetite for more, and appears for good before the helicopters carrying our intrepid explorers touch down on the island, as he angrily starts to swat the copters out of the sky (He even swallows a pilot or two along the way). Once Kong has made his mark, and ambles away, the surviving cast realize that the only way to survive is to make it to the beach, where they can signal for a search party to rescue them. But they have to cover a lot of ground to get to that beach, and this island isn’t as relaxing as it’s lush greenery might lead one to believe. It’s chock a block full with giant creatures of all kinds, octopi, water buffaloes, spiders, ants, small pterodactyl like creatures, and other insects that (for the most part) aren’t too happy to see the surviving cast. There’s also a mysterious group of creatures that live underground, but come above ground to feed, and of course, Kong is still strolling about as well. And it’s already been established that he isn’t too big a fan of humans either.

Luckily the survivors run into Lt. Hank Marlow (John C. Reilly), whose been living on the island for the last 28 years (we discover how/why during the prologue). He calls the underground creatures “Skullcrawlers”, for no particular reason, and he tells the survivors that Kong is actually the entity that protects the island from harm. It’s the skullcrawlers that everyone needs to be fearful of, and now that the creatures know that there’s fresh meat on their island – everyone is gonna need Kong to protect them more than ever. But Preston is furious that Kong has killed most of his crew, and really wants revenge. But will he get to Kong before the skullcrawlers do? 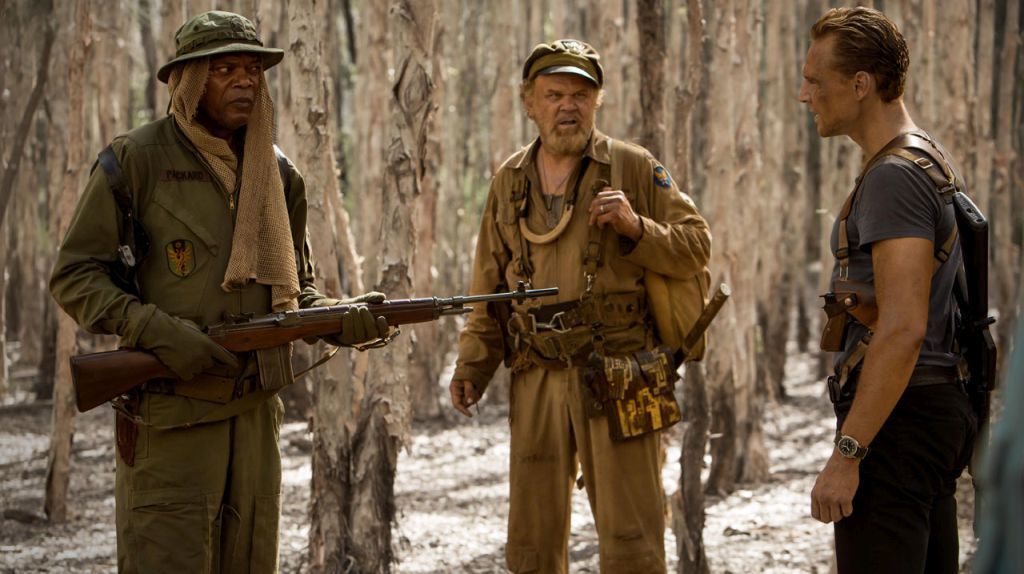 Movies like this one demand big name casting, and exorbitant budgets to get their point across, happily, Kong has both. It’s a beautiful looking film too, with cinematographer Larry Fong doing an amazing job of making the island look about as gorgeous as any similarly themed film locale. Vogt-Roberts keeps the film moving all the time too, it never really slows down despite a few odd moments of down time tossed in every so often. Best of all, most of the big fights take place during the day, which seems to be a novelty for films of this ilk that usually have their fight scenes take place at dusk or at night, where it’s hard to make out what’s happening (I’m talking to you Pacific Rim). All of the actors do a pretty good job here, believably interacting with a 100 ft tall gorilla, and his enemies (which are equally as big), with Hiddleston fitting the square jawed hero role rather nicely. Reilly seems to be having the most fun here with a role where he seems to be doing more than a little bit of ad libbing (which is something he does very well). One of the things I appreciated about the script is that it doesn’t turn Kong into a googly eyed doofus with a crush on the girl. Although he does save her from drowning at one point in the film, Kong never sinks so low as to be enthralled by Mason, and she in turn, doesn’t look upon him as a creature in need of a hug. He recognized that she needed help, and he helped – nothing more, nothing less. Make no mistake, this version of Kong is vicious creature who has no problems with doing away with anyone/anything that’s bothering him. The script (by Dan Gilroy, Max Borenstein & Derek Connolly) takes pains to keep the relationship between Kong & Mason slightly confrontational, eschewing the romanticized efforts of previous Kong films. The CGI here is first rate for sure, but it grew a bit tiresome for me. It felt like too much of a good thing after awhile. And what is it with all of these giant creatures sneaking up on people without being heard? How does a gorilla that’s 100 feet tall climb up the side of a mountain without making any noise? How does a giant sized skullcrawler come up right behind someone without a peep? All of these creatures sneaking about look great though, and Kong has never looked better in a film. 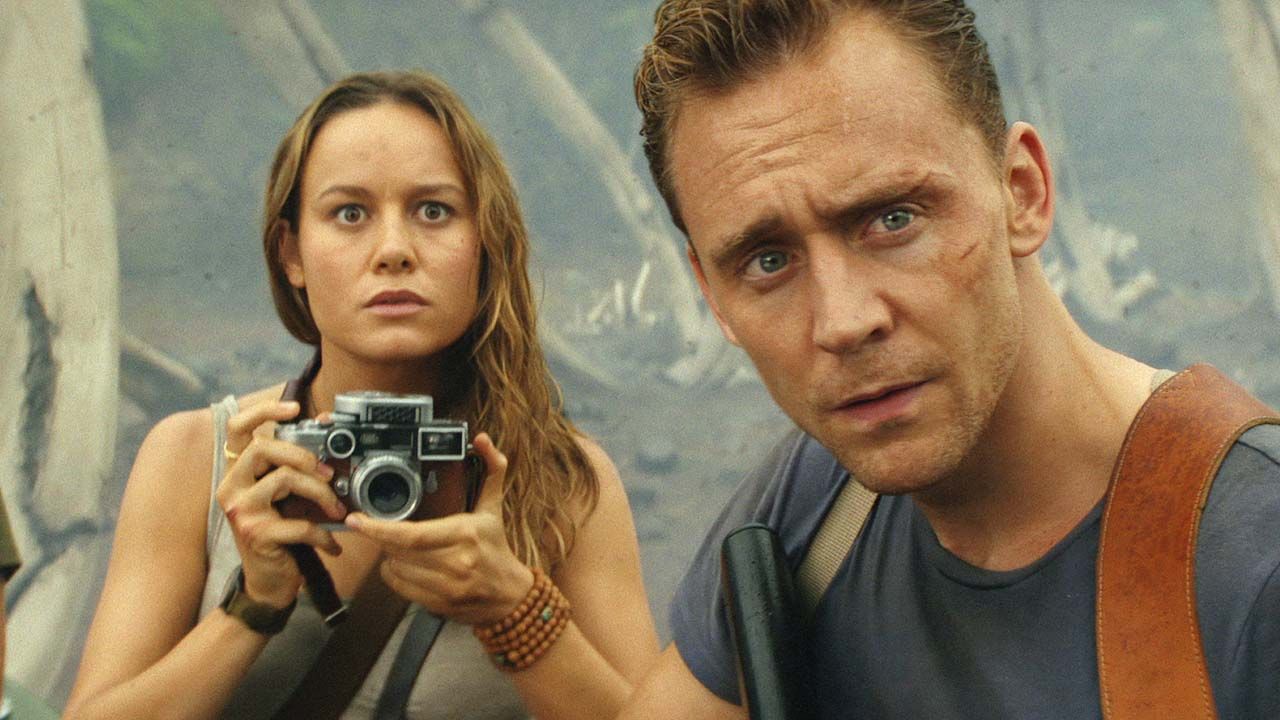 The preponderance of CGI became an issue for these eyes, but the sheer ordinariness of the film is a bigger one. It’s not that there’s anything really wrong with Kong: Skull Island, it’s a fine adventure indeed. But I feel like I’ve been to this island before (& no, I don’t mean in other Kong films), I mean in other films period. There’s not a whole lot of originality here, save for Kong’s near immediate appearance. 2014’s Godzilla didn’t introduce the title character until nearly an hour of the film had gone by, so seeing Kong front & center right off the bat was a welcome surprise. But I wasn’t too moved by what followed, it all began to look the same to me after awhile. The narrative/visuals held my interest, but I did feel a sense of ennui settling in as the film neared its climax. 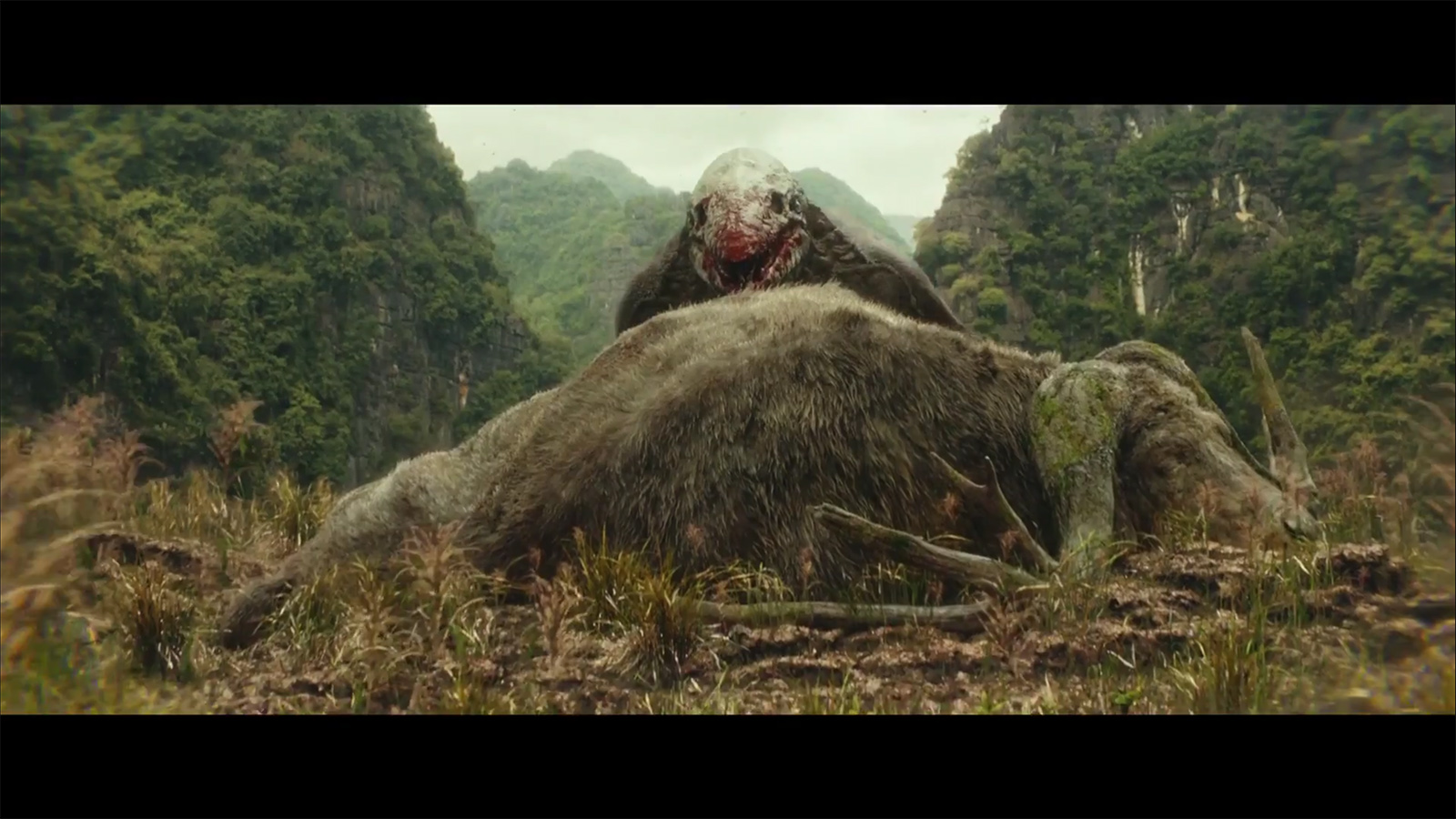 But don’t let that dissuade you from seeing this. For the most part, Kong: Skull Island is a rip roaring adventure that will satisfy your Kaiju lust until the next Godzilla film comes along (sometime in 2018). Do yourself a favor and stay through the end credits for a stinger that hints at (I’m stealing a line from the new Mummy trailer here) “A new world of gods and monsters“. If it lives up to what it promises, I think the future of American Kaiju films will be safe and secure for a long while.