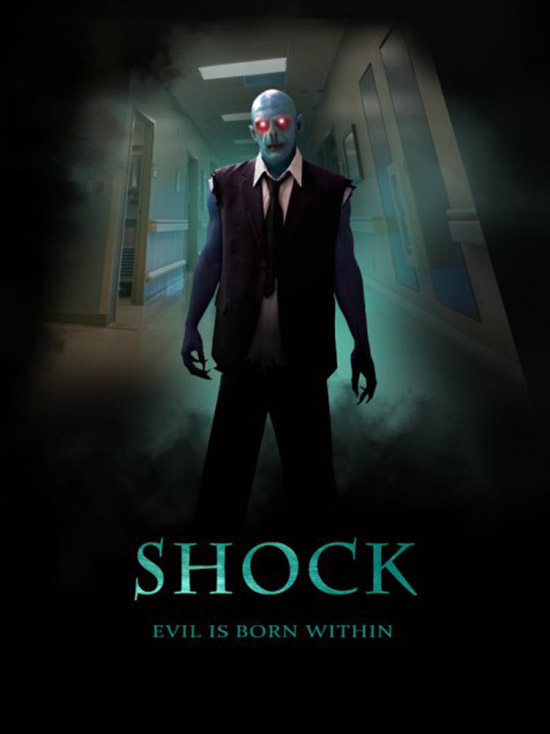 A private investigator and recovering drug addict struggles with his inability to believably deliver a line reading. Elsewhere, a psychiatric ward’s employees are being murdered by a bright blue orc from Lord of the Rings, wearing an ill-fitting suit with the sleeves cut off, like a pro-wrestler with an office job.

If there’s a single shock in the film,” Shock”, it’s that they were able to find fifty grand to make it. Making a movie is difficult work and requires a huge amount of dedication; making a movie this badly requires just as much effort, just in the wrong direction.

Doing a quick Google search will reveal that a Steadicam rig, brand new, is around an average of three thousand dollars, and it’s a sure thing there are plenty of places to rent them at even lower rates. Yet, the film seems to have been shot during an active earthquake. Some scenes look like the actors are slowly being lowered into the ocean as their chins touch the bottom of the frame. This movie couldn’t have had more than one quick attempt at each scene due to the wooden, no, not strong enough, due to the steel girder like performances. The acting is so poor it almost distracts from the director’s inability to correctly frame a shot. Awkward angles abound, making simple expeditionary dialogue surrealistic, almost as if each actor is totally unaware of the other, responding to lines they haven’t heard.

Mohammed Bardi, the writer and star of the film looks like a mechanic, dads wouldn’t bring their car to because he refused to itemize the bill. From what can be deciphered from this performance he’s playing the part of David Evans. We meet him after a one night stand with a British woman he has plied with drugs to sleep with him. The scene proves that it’s good to write the movie if you’re the star and look like Mohammed Bardi. Any other writer would have him at the best Henchman #8. She has left him her number, and her body doesn’t physically revolt at the thought of being in the vicinity of his naked body. Her lack of vomit is the only convincing acting in the film.

Later that day, he meets with a former colleague, who won’t be the only person who remarks that he looks terrible. She wants him to investigate the recent murder of a nurse at a psychiatric hospital. At only nine minutes in, this movie has become unbearable, and though the scene where David drinks a beer while ironing his shirt is thrilling, it is patience-testing.
Another scene follows with a shakey camera and beyond awful dialogue. It’s an emerging pattern. A cop still on the force gives him whatever information she has on the case. Oh, and also says he looks awful.

“Shock” takes its first turn from bad cinema into so bad it’s good cinema when David is back at home again, in the not very violent throws of withdrawal and he sees a lion-faced demon guy hanging out, looking at him meanly. No explanation, they stare at each other for awhile. Looking in the mirror afterwards, David confirms that yes, as he has been previously informed, he does look terrible.

A long, rambling, barely audible meeting with the head of the psychiatric ward follows, where unnecessary information is thrown out stiltedly like Santa throwing Tootsie Rolls at kids during a parade, which turn out to be turds. None of it is particularly pertinent or interesting. Settling into the idea that this is an absolute garbage film, the plot doesn’t mean much.

Waiting for the next strange thing to happen doesn’t take long, as the lion faced guy from the bathroom is seen casually strolling along the side of the road. Less a threat and more of a burnout trying to hitch a ride to a music festival. Once more, the encounter results in nothing. Is this guy some sort of physical manifestation of his withdrawal? Could this awful script contain such a high-minded idea?

The moment this becomes a masterpiece of trash is at the point, Rachel, his one night stand from earlier, returns seeking drugs. He hesitantly hands over his last stash, a bag of marijuana: the hardest drug of all. Retroactively forced to think that all of the discussion of his addiction and looking awful is about weed usage throws the film into an entirely new light.

David reveals to her a flashback, to the night he left the police force. In the flashback, a small child holds an old man at gun point and he holds the child at gun point. The kid shoots the old man; he shoots the kid. It’s baffling and insane, but the movie becomes far more watchable.

‘Shock’ is not a good or even largely comprehensible film. Bad acting, awful dialogue, and it even looks terrible. Yet, there’s that unique quality of trash cinema which doesn’t let you look away, needing to know how bad it can possibly become. This starts out terrible and for an hour and nine minutes continues to prove it can do worse. A potential future cult classic, perhaps the audience will one day yell along with all the times David is told he looks terrible.