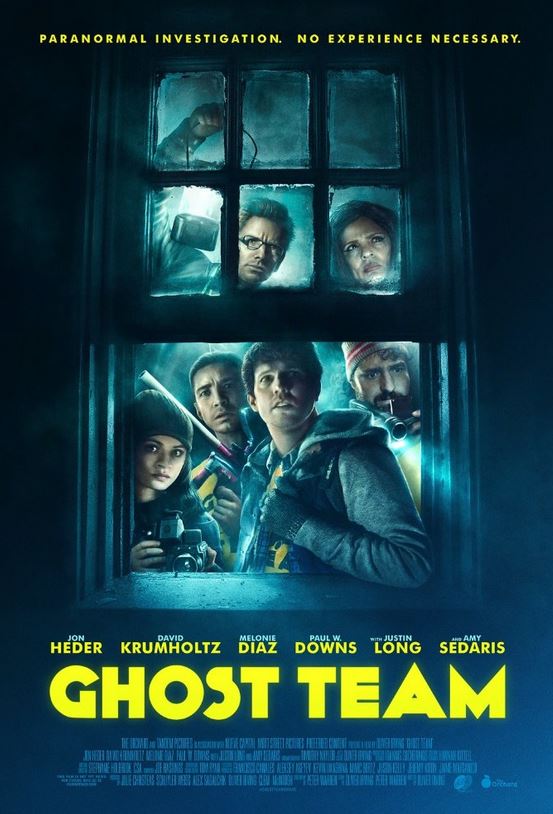 A rightfully depressed man assembles a ragtag group to investigate a purportedly haunted house. This group includes his nephew, who looks like someone about to attend a late 90’s rave. Along for moral support is his chubby best friend who believes his girlfriend was abducted by aliens. Also there’s a mall cop with the haircut of an Amish terrorist, a psychic, and a girl who works nearby.

If there is anything that could be remotely described as horror in Ghost Team, it’s a man in UFO pants making fun of someone and not being mocked himself. What the movie attempts to be is a charming comedy about a group of misfits looking for their purpose. It fails, admirably, and with a committed cast composed of actors and actresses that make you think, ‘hey that person looks familiar.’ With a stronger script, one that had included actual jokes and better utilized the talents of the established cast, this might not have been a slog. 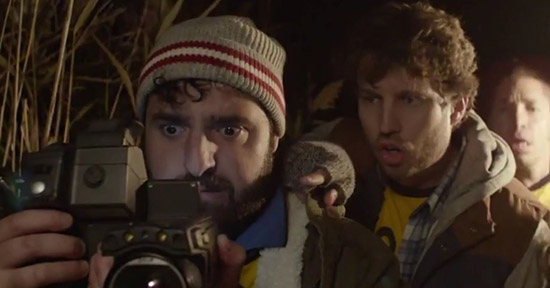 The overall humor level can be summed up by the introduction of David Krumholtz’s Stan. We first see him trapped in a window, but there’s no escalation of the joke he just struggles for a few moments and then falls in. It’s a reliance on the understood charms of the character, but he’s not someone that the viewer has anything invested in. Once he’s inside and heaving on the floor, the writer drops one of perhaps two running jokes, that Stan believes his girlfriend was abducted by aliens on their wedding day.

Due to this broken heart he crashes on the couch of Louis (Jon Heder.) Louis doesn’t seem too bothered by any of this. He doesn’t seem to be bothered by anything. Overall he’s a tiresome flat note, an uninspired choice for a lead in a movie. Louis is obsessed with the show, ‘Ghost Getters’ a clone of, ‘Ghost Hunters,’ even featuring two of the actual ‘Hunters.’ The show is seeking a new crew member and Louis with all the bursting charisma of a saltine, thinks he’d be perfect for the position.

Fortuitously, a man comes into the print shop where Louis works, spinning tales of the haunted barn he owns. This sends the wheels spinning in Louis’ mind and assembling the necessary equipment for any paranormal investigation, his ghost team sets off to investigate.

Ghost Team exists in the world of an IKEA showroom. As much as it tries for a simple reality, nothing in the world of has the remote appearance of being lived in. Louis’ apartment feels like it’s staged for an open house. During the investigation of the supposedly haunted barn it could be accurately described as rustic chic, not a hotbed of beyond the veil activity. Even if the characters had been written with great depth, the staging of the movie never ceases to remind you this is a film and not a very creative one.

When the paranormal investigation begins, the plot falls into an ambling hodge-podge of running around and irritating gags. Aside from Stan’s repeated insistence in his girlfriend’s abduction, there is only one other repeated attempt at humor. The constant mocking of a security guard who failed out of the police academy, Ross (Justin Long), by the preposterously dressed for a film in 2016, Zak (Paul W. Downs.) Ross is a grating electronics store employee, his sense of dominance over anyone feels vastly misplaced.
The other two team members are equally purposeless. The psychic Victoria (Amy Sedaris) walks around in a haze of throwaway dialogue. Her purpose is only to disappear about halfway through the film to further the plot. Needing one more female character Ellie (Melonie Diaz) is thrown in without any purpose whatsoever.

These aren’t badly acted characters at all, there’s an added layer of disappointment having such established character actors with no depth. After they arrive at the farmhouse any chance of developing them into someone worth investing in drops away faster than the already waning interest in the outcome of the movie.

Nothing in the entire second half satisfies either in scares or laughter. This is director Oliver Irving’s first film since 2008 and he may have completely forgotten about the concept of dramatic tension in the intervening years. It’s a gentle cup of tea desperately in need of a shot of espresso. It deserves the same effort to be seen as the writer put into the script; very little.