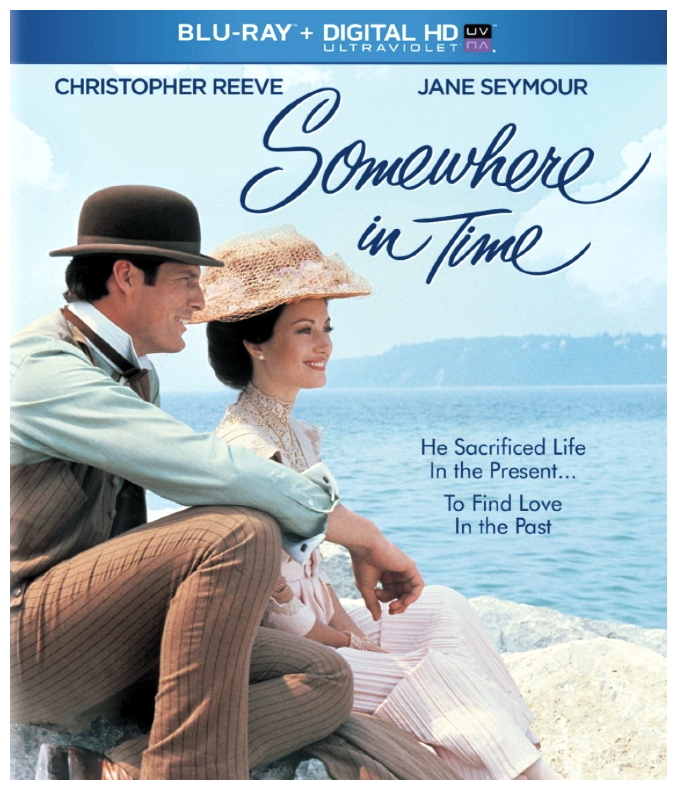 “College student Richard Collier gathers rave reviews for his new play. At a party, he comes face-to-face with an old woman who presses something in his hand and whispers ‘Come back to me’. He opens his hand to find an old pocket watch. Cut to several years later. Playwright Collier is in the midst of a break-up and writer’s block. He leaves the city for awhile to think things out and finds himself near his alma mater at the Grand Hotel. While wandering around the hotel, he finds a photograph of a beautiful young woman. Richard is entranced, and tries to find out all he can about her. During the course of his research he learns she was Elise McKenna, an actress from the turn of the century. He also discovers that she was the mysterious old woman who gave him the watch. Finally determining that he must meet her somehow, he employees self-hypnosis and wills himself back to 1912. He meets Elise and they fall in love, which does not make her manager, William Fawcett Robinson, happy at all. Will their love survive Robinson’s disapproval? Will Richard be able to stay in 1912?” (courtesy IMDB)

Time-Slip Romance is a branch of Romantic Fiction and closely associated with Paranormal Romance. These stories usually focus on characters transported to an unfamiliar time period, falling in love and deciding to stay in the alternate era or return to their own era. Such stories often involve unrequited love and do not always end happily-ever-after. The focus of these tales is usually the love story, although there is always some element of fantasy or science fiction used to initiate travel through time: Magical stones; jewellery; machines; time-warps; or simply the power of one’s own mind are all methods employed to send the character to the necessary era. Time-Slip Romances can sometimes concentrate on nostalgia more than actual love, from the comedic classic A Connecticut Yankee In King Arthur’s Court (1889) by Mark Twain, to popular television shows such as Catweazle (1970-1971), Goodnight Sweetheart (1993-1999), Life On Mars (2006-2007) and Sleepy Hollow (2013-2017). 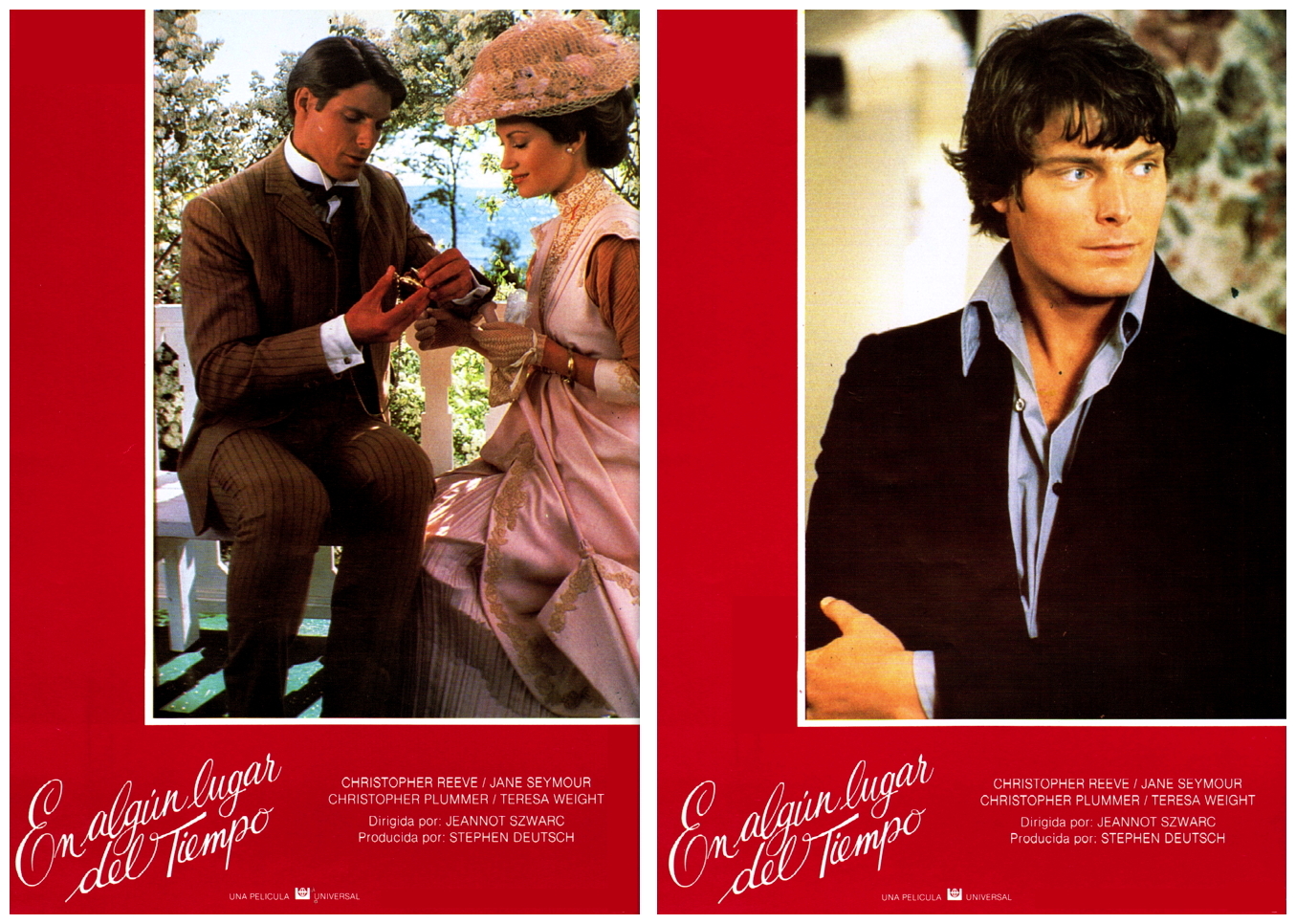 Cinematically, the subject has been best portrayed in Berkeley Square (1933), Portrait Of Jennie (1948), Time After Time (1979) and Somewhere In Time (1980). An earnest but uneven adaptation of Richard Matheson‘s romantic novel Bid Time Return, Somewhere In Time is a lifting and somewhat fragile tearjerker in the tradition of Portrait Of Jennie. Driven by mysterious passions, time-crossed lovers find themselves in a heartbreaking paradox – they are ultimately ripped from each other by fate, with only death enabling them to reunite. Matheson explored the afterlife in many of his works, most significantly in What Dreams May Come (published 1978, filmed 1998), but the focus here is on a romance that begins only after Collier has completed his inexplicable time-slip, drawing comparisons with the venerable Berkeley Square: Lock yourself away from reality, fill the room with artefacts of the past, and a person can somehow propel themselves into another era. That’s one method of time travel my old friend H.G. Wells never considered, although the determined John Carter was able to mind-project himself to Mars in the Edgar Rice Burroughs stories, which is similar. 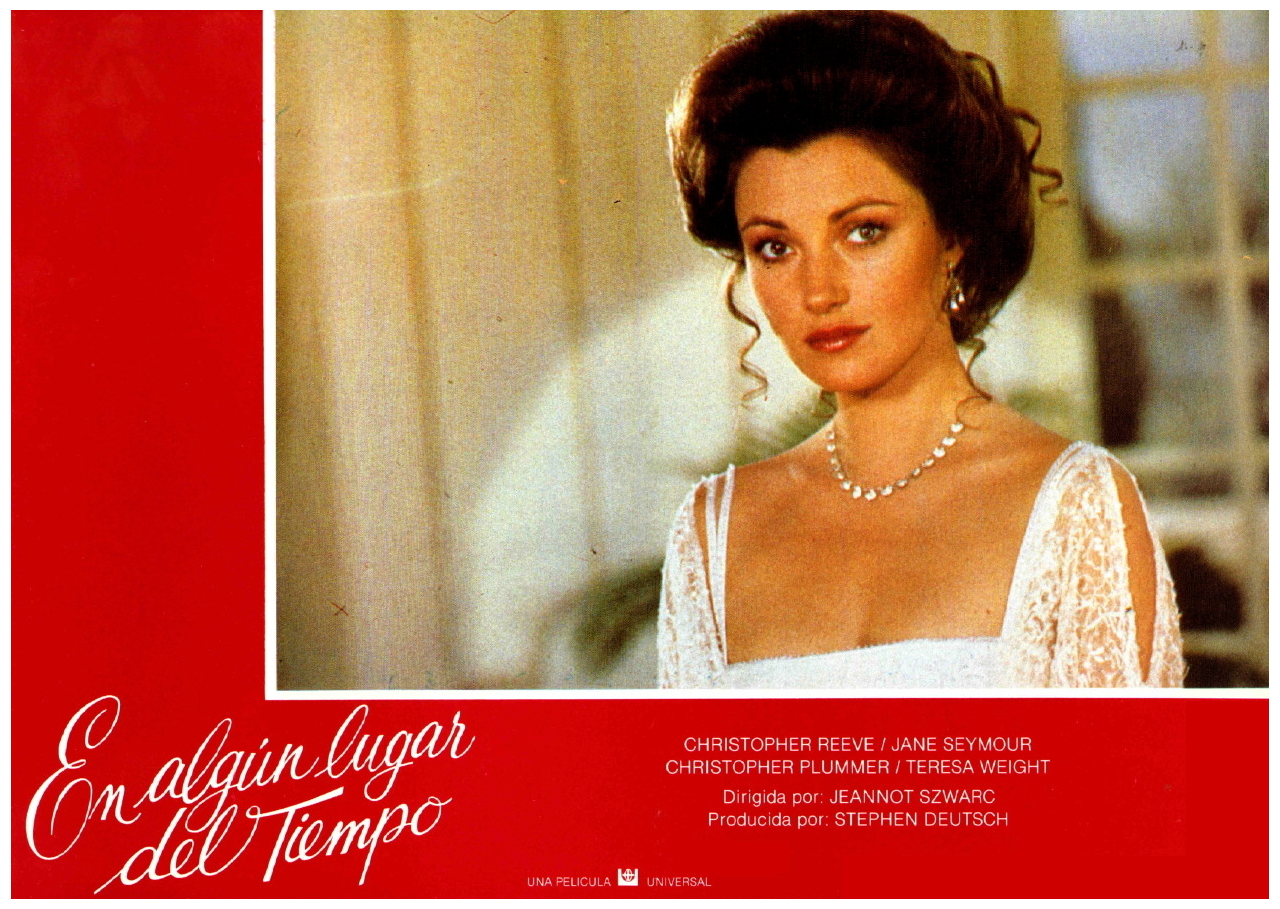 Somewhere In Time begins in 1972, when college student Richard Collier (Christopher Reeve) is celebrating the debut of a play he has written. During the party he is approached by an old woman (Susan French) who puts a pocket-watch into his hand and whispers, “Come back to me.” Collier doesn’t recognise her, and discovers soon after she had passed away after their meeting. Fast-forward to 1980, Collier is a successful playwright recently separated from his girlfriend and struggling with writer’s block. While on a short holiday at the Grand Hotel, Collier becomes obsessed by a photograph of a beautiful woman. An elderly bellhop named Arthur (Bill Erwin), who has been working at the hotel since 1910, says the woman is famous stage actress Elise McKenna (Jane Seymour). Collier soon realises it was she who gave him the pocket-watch eight years before. 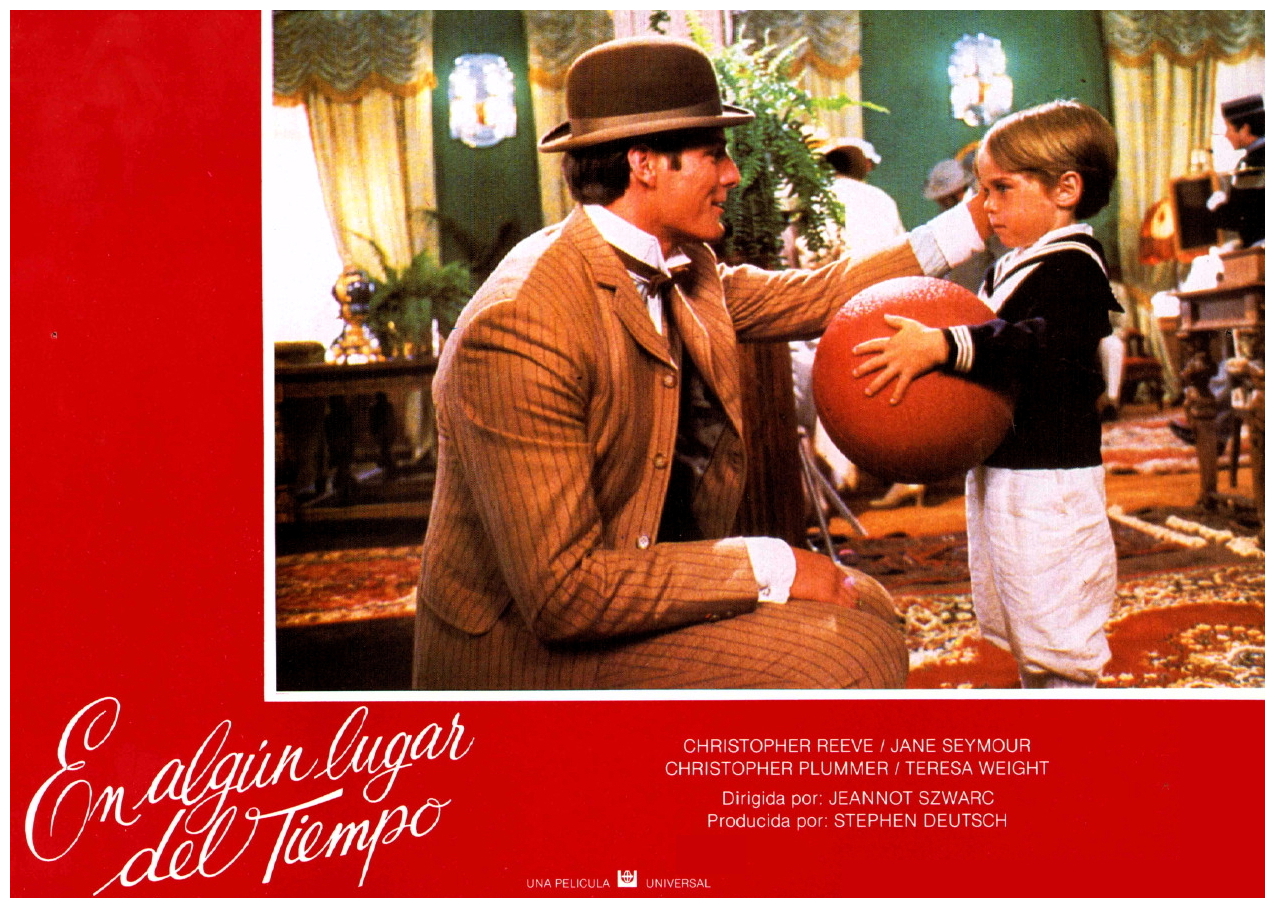 With the help of McKenna’s former housekeeper (Teresa Wright) he finds a music box that McKenna had made in the shape of the Grand Hotel which plays his favourite melody. Also found is a book about time travel by his old college professor Gerard Finney (George Voskovec). Collier becomes obsessed with traveling back to 1912 and meeting Elise McKenna. Collier discovers that Finney once time-slipped to 1571 through the power of self-suggestion. To accomplish this feat of self-hypnosis one must remove from sight all things that are related to the current time and trick the mind into believing that one is in the past. Finney also warns that such a process would leave one very weak, dangerously so. Collier buys a vintage suit, cuts his hair in an appropriate style, removes all modern objects from his hotel room and attempts to will himself into the year 1912, but fails to do so. Later Collier finds an old guest book from 1912 with his signature and knows that he will eventually succeed. 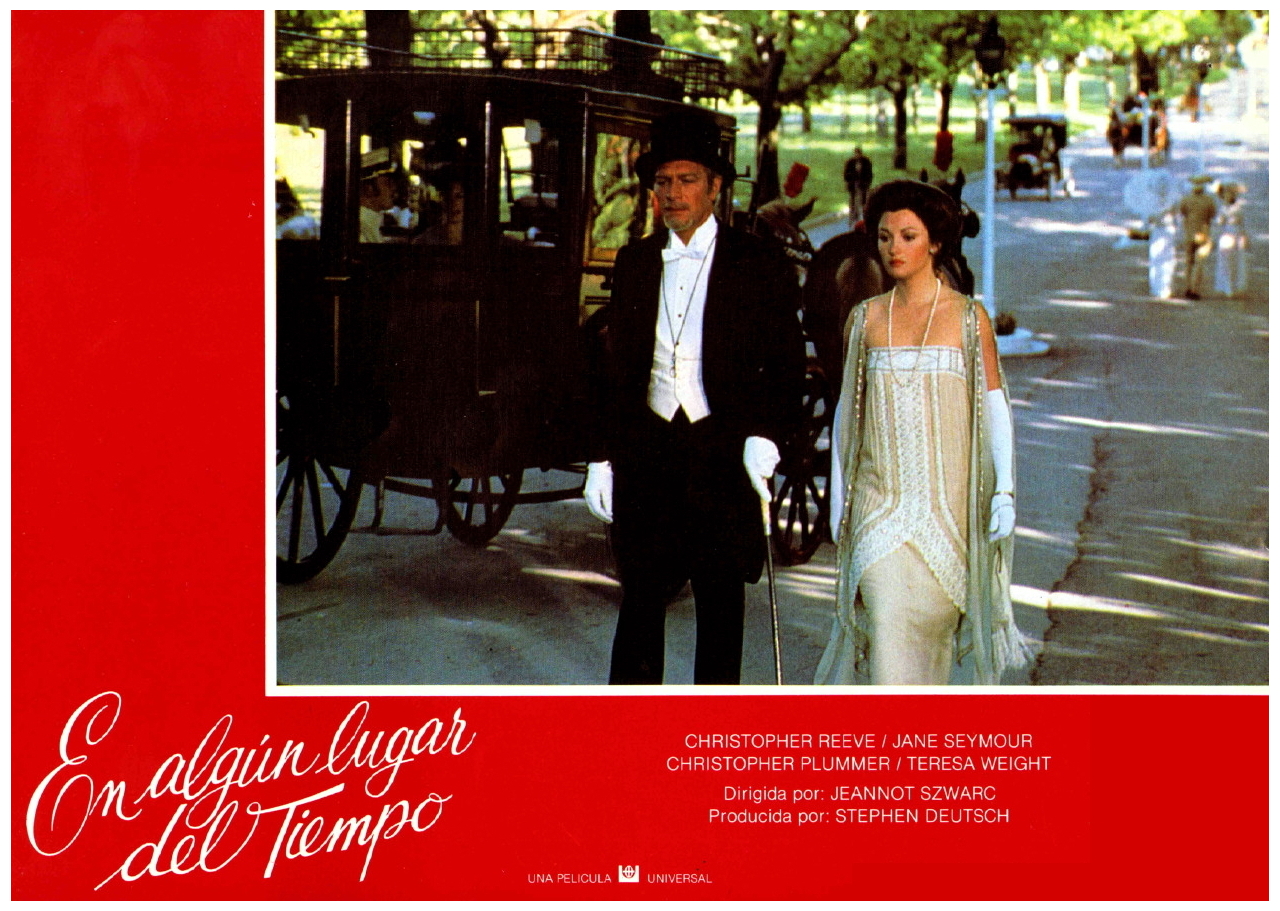 Collier hypnotises himself again and allows his absolute faith in his eventual success to become the trigger for the journey back through time, falling asleep and waking up in 1912. Richard meets Arthur as a small boy and looks for McKenna, finding her near the lake. She swoons at the sight of him and asks, “Is it you?” McKenna’s manager, William Fawcett Robinson (Christopher Plummer), sends him away but Collier stubbornly pursues McKenna until she agrees to accompany him on a stroll through the surrounding idyllic landscape. Richard hums a tune by Sergei Rachmaninoff, which McKenna has never heard before because it was composed in 1934. Collier watches McKenna in her stage play, where she recites an impromptu monologue dedicated to him. During intermission, she poses for a photograph and, seeing Collier, breaks into a radiant smile, the camera capturing the image which Collier saw 68 years later (this photograph of Seymour is the same used in her later television series Doctor Quinn Medicine Woman). Eventually Robinson demands that he leave McKenna for her own good but Collier refuses, so Robinson has him tied up and locked in the stables. 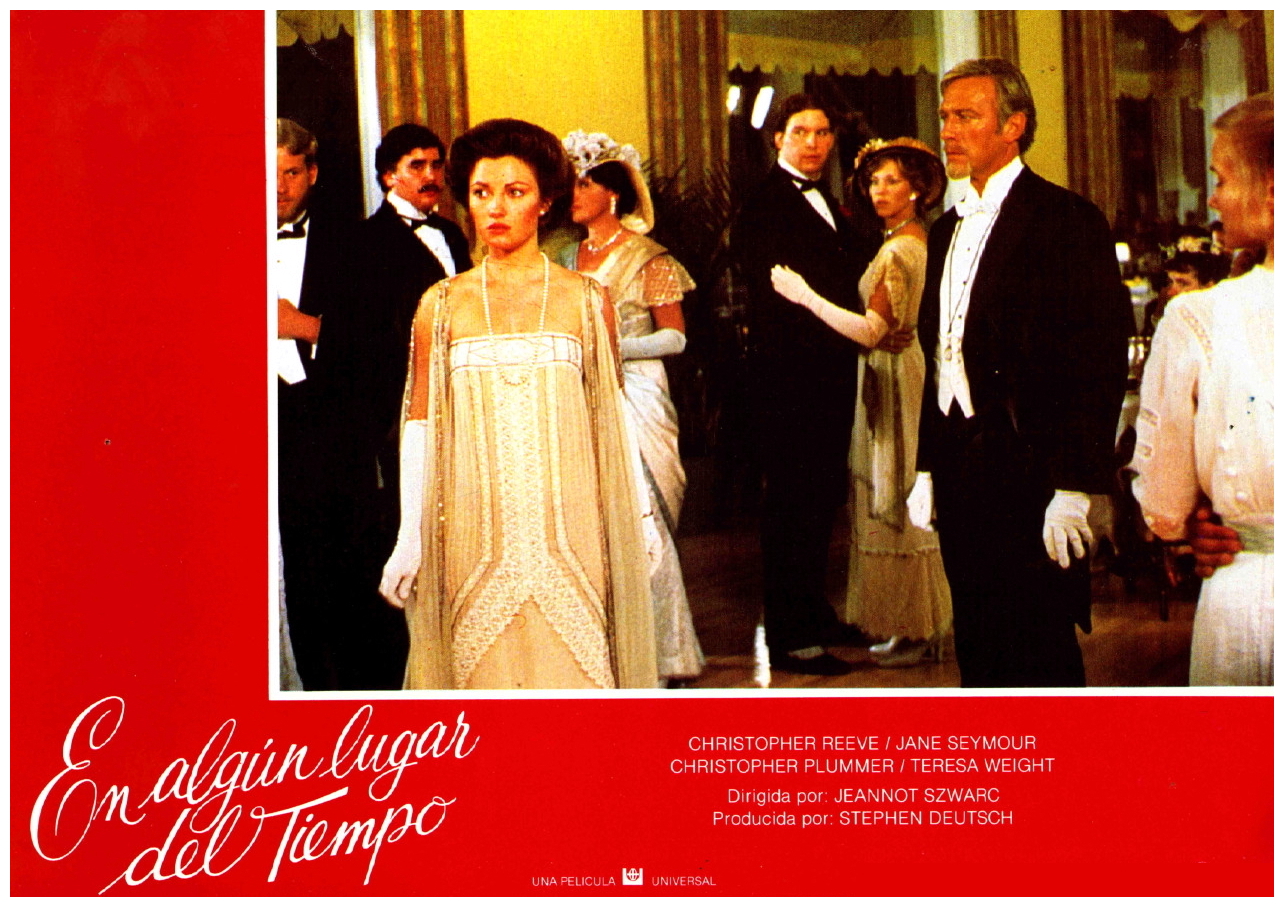 Robinson tells McKenna that Collier has left her, but she refuses to believe him. Collier eventually manages to free himself and runs to McKenna’s room only to find she’s booked out. He goes out to the hotel’s porch where he hears McKenna calling his name and sees her running towards him. They return to his room together to make love and, next morning, they agree to marry. All set for a happy ending until Collier finds a 1979 penny in his pocket. Seeing a modern-day item wrenches him out of his hypnotically induced time-slip, and McKenna screams his name in horror as he is yanked out of time. Collier wakes up back in 1980, in the same room where he and McKenna were last together in 1912. Drenched in sweat and exhausted from his trip through time, he runs back to his own room and tries to hypnotise himself again without success. He remains in his room for several days before Arthur sends for paramedics. Collier smiles and sees himself floating above his body. Having died of cardiac arrest, he goes toward the light shining through a window to be reunited with McKenna in the afterlife. 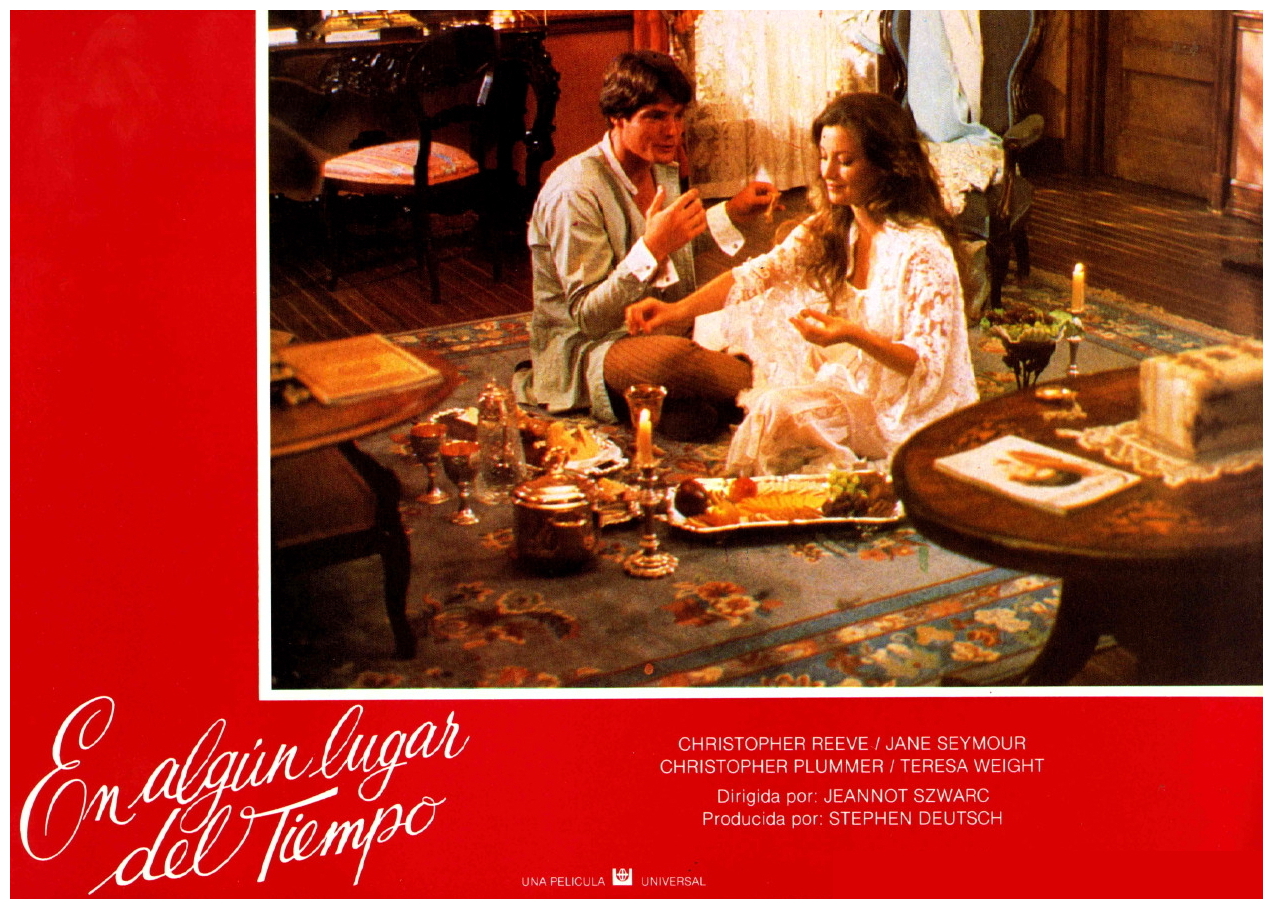 From its bittersweet plot to John Barry‘s lush Rachmaninoff-inspired soundtrack, Somewhere In Time certainly touched many viewers, earning its long-standing cult status, despite some major changes in adaptation. For instance, Matheson’s original novel has Collier travel from 1971 to 1896 rather than from 1980 to 1912, and is set in California’s Hotel Del Coronado rather than the Grand Hotel in Michigan (the reason for this change is simple – the Del Coronado had recently been renovated). Collier is dying of a brain tumour and the novel suggests that the entire experience may have been merely a series of hallucinations brought on by the tumour, and finally dies because of the tumour, not heartbreak. The scene in which the old woman gives Collier the pocket-watch is not in the novel at all and, instead of Robinson, it’s a pair of psychics who predict Collier’s arrival. Hunky Christopher Reeve does his best but is slightly miscast as the obsessed playwright protagonist, his Clark-Kent-style awkward delivery routine is often at odds with the tale’s elegant tone. This was his first film after the international blockbuster Superman The Movie (1978). Producer Stephen Deutsch wanted Reeve for Somewhere In Time, but his agent rejected the salary offered and neglected to inform Reeve, so Deutsch secretly slipped Reeve the script in his hotel room. Reeve called the next day and said he loved the script and accepted the role. 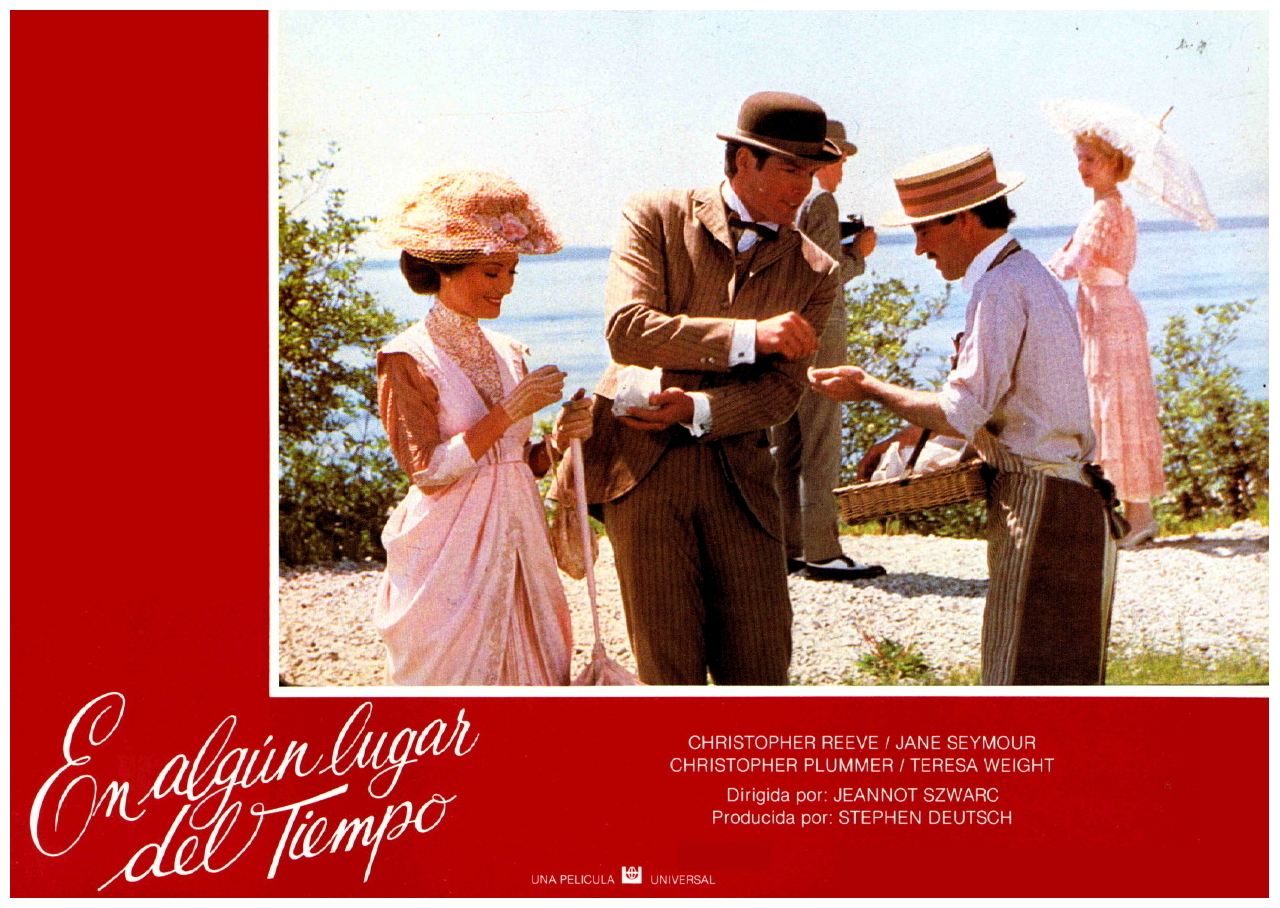 More effective is Jane Seymour, her spontaneous changing of dialogue during a stage performance to convey her preternatural love for Collier providing the film’s most memorable scene. The actresses who auditioned for the role (including Bo Derek) were all asked if they had ever been in love before, and Seymour was the only one who said no (it was actually Seymour who suggested John Barry compose the score, but Deutsch said there was no way they could afford the multi-award-winning composer. A close friend of Barry, Seymour told him about the project, he loved it and agreed to do it). Also present for some minor personal conflict is Oscar-winner Christopher Plummer, appropriately dour as McKenna’s jealous Svengali-like mentor-guardian Robinson, as well as the motion picture debuts of both William H. Macy (as a critic) and George Wendt (as a student). Hampered by a story better suited to a shorter treatment (ideal as an hour-long Twilight Zone or extended Night Gallery perhaps), Somewhere In Time failed at the box-office for a number of reasons: 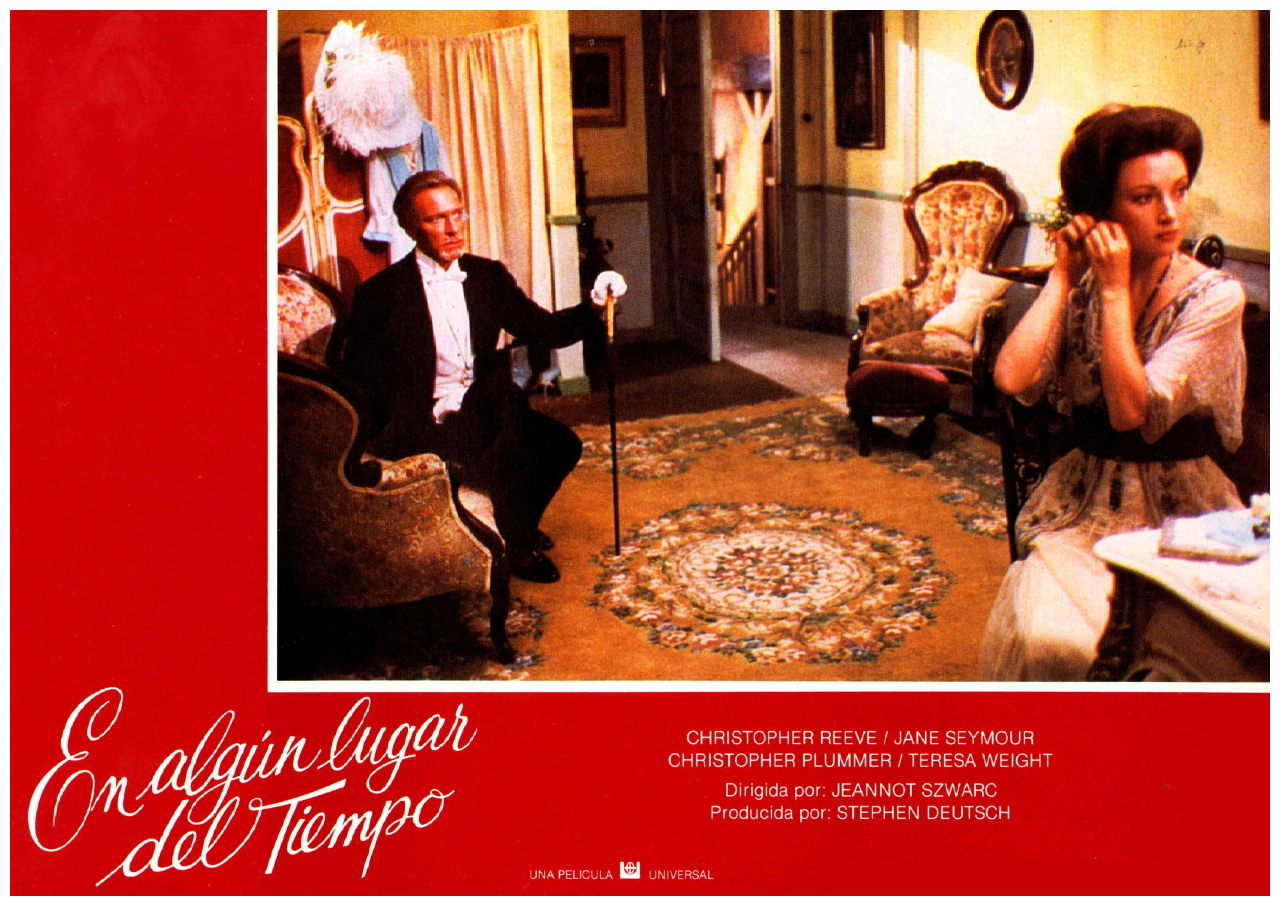 1. The leads were not permitted to promote the film or participate in interviews due to an actor’s strike.

2. Universal Studio‘s lack of support, choosing to concentrate on marketing The Blues Brothers (1980) instead.

3. No visual effects, which were expected by audiences in an era when cinematic effects were going through a major revolution.

4. No third act (a Broadway version written by Matheson himself premiered in 2013 but never toured, primarily for the same reason – the lack of a strong third act).

5. Bland direction from Jeannot Szwarc, a surprise since it was he who initiated the project. A director more suited to television, Szwarc has directed hundreds of TV episodes since 1968, briefly taking time out in the early eighties to make a few motion pictures like Jaws 2 (1978), Supergirl (1984) and Santa Claus The Movie (1985). 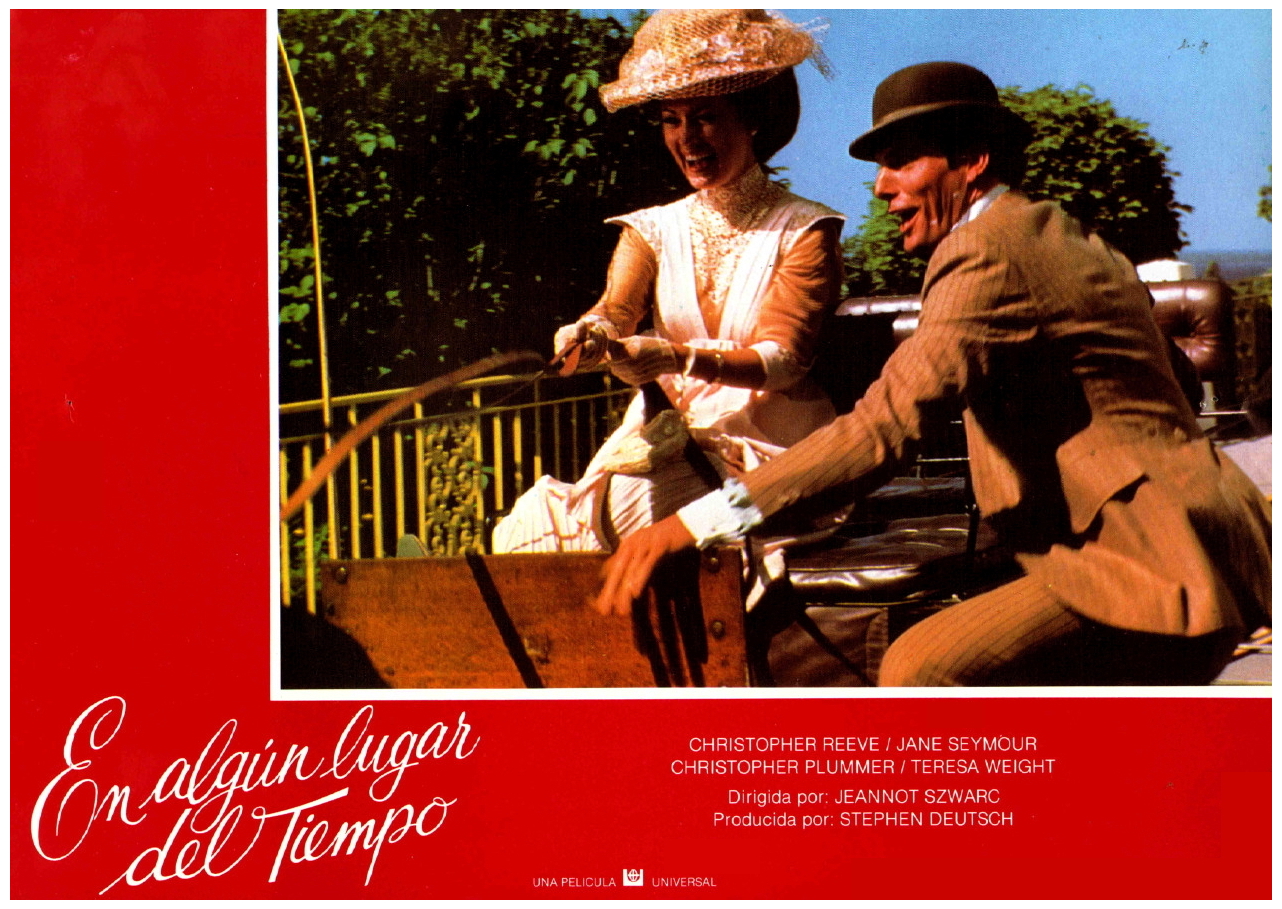 Despite these problems it was a huge hit in Asia, one of the highest-grossing films in China playing in Hong Kong for eighteen months, and eventually became a cult favourite in the West when released on VHS. Somewhere In Time is an old-fashioned movie made in an old-fashioned way with minimal effects and maximum impact. Reeve and Seymour are undeniably appealing, ideal for great romance, but the filmmakers should have scrapped the dreary plot (as it is presented here, not as in Matheson’s prize-winning novel), sent all the other actors home, and just had the two stars make love in every room of the glorious old hotel. It’s with this rather erotic thought in mind I’ll graciously invite to please join me again next week when I have another opportunity to make your stomach turn and your flesh crawl with another lusting, slashing, ripping, flesh-hungry, blood-mad massacre from the back side of Hollywood for…Horror News! Toodles! 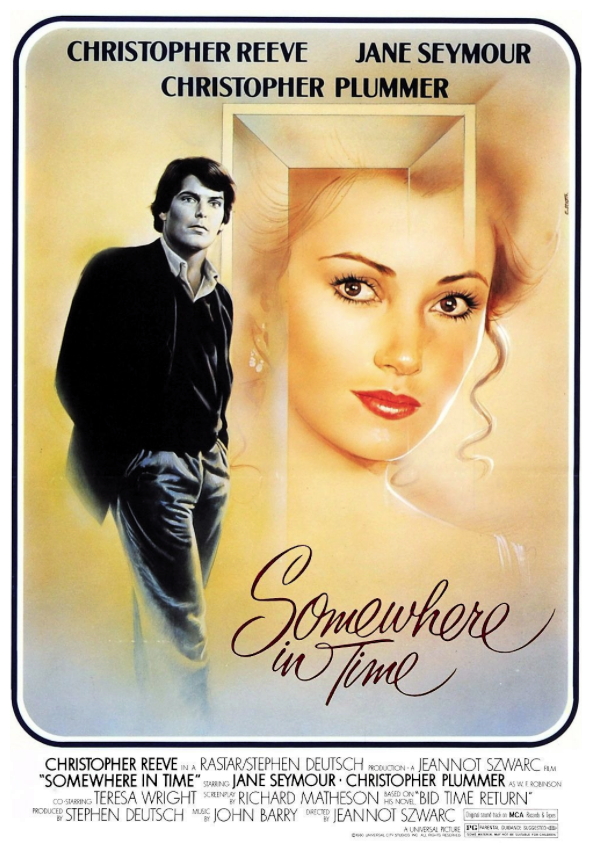