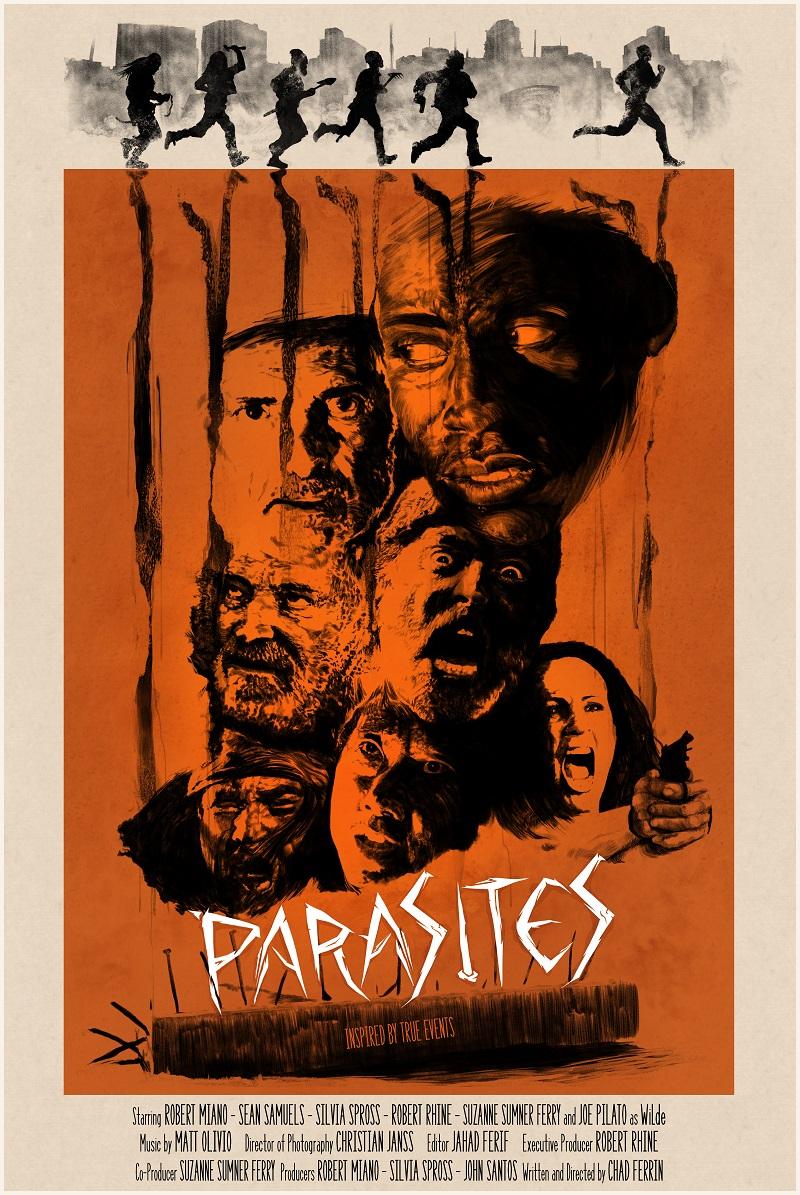 Genre vet Robert Miano (Donnie Brasco) headlines as Wilco, the leader of a band of bloodthirsty vagrants who rule the underpasses and alleyways of downtown LA. When he and his men come across a trio of lost college boys (centered around newcomer Sean Samuels), all hell breaks loose.

The industrial barbarianism of downtown Los Angeles is equal parts player and punisher in this survive-at-all-costs tale of a group of friends who get lost in the seedy streets where they encounter a crazed gang of homeless derelicts that captures and maims them one-by-one. One lucky man escapes on foot, naked and unarmed, with a pack of depraved transients in pursuit, staying only seconds ahead. Clinging to sanity and reduced to helpless prey, with only instinct to guide him, can he survive this coliseum of horror?

I’m always curious to see what the High Sheriff sends my way to review. When I got the latest list of movies, I saw the title of this particular flick and thought it’d be a documentary about the Kardashians. While that turned out to be wrong, the results were as equally terrible. 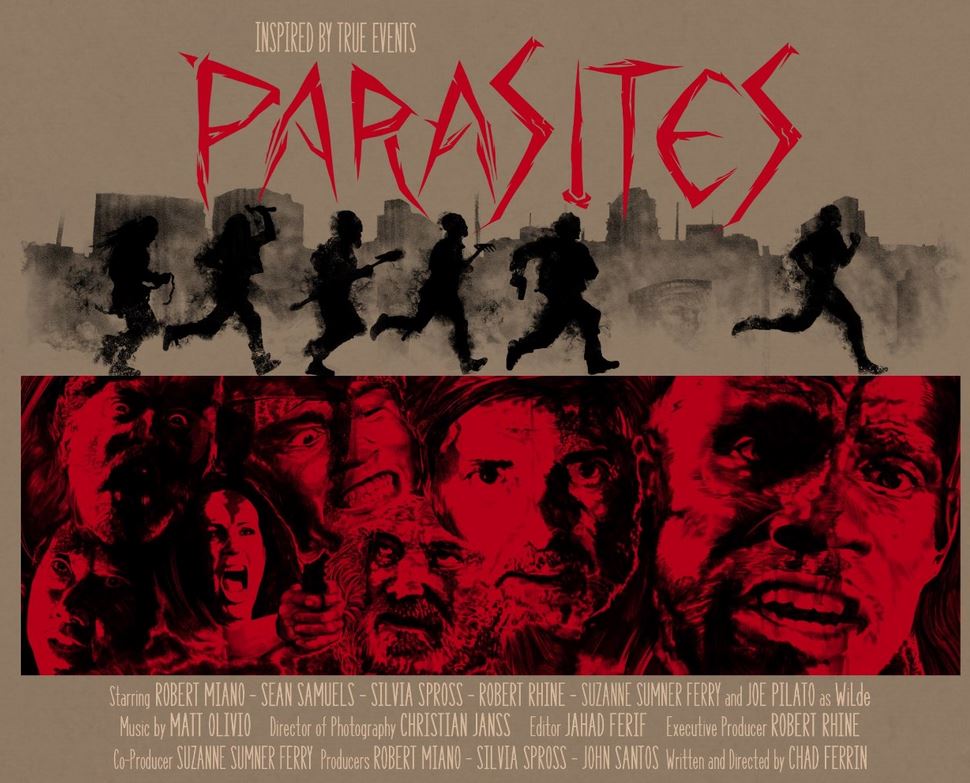 Parasites follows the story of Marshall, a freshman at USC who’s out on the town with his two buddies. Following the horror movie rulebook of bad decisions, he and his friends are taking a shortcut through some of Los Angeles’s alleys. Adding to the complications of getting lost, Marshall’s fancy new SUV gets a flat tire. While trying to change it, the three young men are set upon by a group of rather angry homeless people. The confrontation turns violent, leaving Marshall the only one of his friends to survive. He finds himself running for his life, hunted through the streets of downtown Los Angeles by a group of hostile hobos.

When watching this flick, I couldn’t help but think of the story “The Most Dangerous Game”. That’s a book that’s gone on to not only be adapted into film a few times, but has gone on to influence other movies  throughout the years. You see elements of it in movies like Australia’s “Turkey Shoot” and even Jean Claude Van Damme’s “Hard Target”. Parasites at least took a different kind of approach by having it be homeless people stalking wealthy targets. As interesting as flipping the concept around was, the movie doesn’t do enough to live up to the promise.
One of the main issues is the pacing. There would be a scene of Marshall fighting for his life, followed by scenes of him running. And running some more. And when you think you’ve seen enough running, you get to see him doing it some more. The Arnold Swartzenegger flick “The Running Man” didn’t have this many scenes of running in it. It wouldn’t be so bad if we had more action in the movie, or a feeling that Marshall’s pursuers are hot on his heels. The scenes of our antagonists arguing with each other when they discover Marshall killed on of them didn’t quite help. For the whole film to work, we needed to feel like the main character is in constant state of danger. When we’re bombarded with shots of him just racing through seemingly empty alleys and streets with no signs of pursuers, the experience becomes dull.
To talk about the biggest gripe I have, I’m going to have to go into spoiler territory here. The problem I speak of is the ending. There wasn’t some great big plot twist that came out of left field or anything like that, but that didn’t make it any less of a stinking steamy pile of bull poop. It’s a downbeat ending, to say the least, and that in itself isn’t the problem. It was the fact that the climax was actually very unfair to both the main character and the audience. He didn’t deserve to be in his predicament, and for the movie to end his story the way it did seemed to make his struggle seem completely pointless. One could argue that it’s part of the message that the filmmakers were trying to say about how unfair society can be, but they could have done that in any number of ways that would have been more fair. I can’t say anything more without giving it away, but trust me, this conclusion of the movie was kind of insulting. I went from being ambivalent towards the film to outright hating it.

Despite how much I’ve grown to loathe the film, there were some high points. One was a surprise appearance by Joseph Pilato. He was only in a couple of scenes, but man, did he chew that scenery like it was the first meal he’s had in days. He played a vagrant who seemed sympathetic to Marshall’s plight and was willing to help (after some bribery was involved). Pilato would go on to give a foul-mouthed speech that would have made his character from Day of the Dead proud. It was a blast to see him, and it was a shame he was not in it more. He looked like he was having some fun with the role. This movie definitely could have used more of him to add some life to it.
Another big plus was the character of Wilco as played by Robert Miano. Wilco was our main antagonist and seemed to have some real depth to him. He claims that what he’s doing is to protect his people and strike back at a society that’s taking what little they have left. All they have left is the streets, and the prospect of gentrification of their area is threatening to take that away from them. As the film progresses, we see Wilco call his followers racist names and be generally insulting to them. It soon becomes obvious that his real motivation isn’t to protect them, but to express his rage on those that have it better than him. The world has left him an angry and bitter man. It’s easy to understand why. He was someone that served his country only to end up living on the lowest rung of society. Robert Miano did an excellent job in giving Wilco an undercurrent of anger and bitterness, and he was electric in every scene he was in.

This movie showed some promise at first with it’s inversion of a classic concept. Robert Miano was fantastic as our villain, and Joseph Pilato was just fun as heck in this. Unfortunately, pacing issues and frankly b.s. conclusion quickly squandered its potential. Needless to say, I don’t recommend this movie.
Share