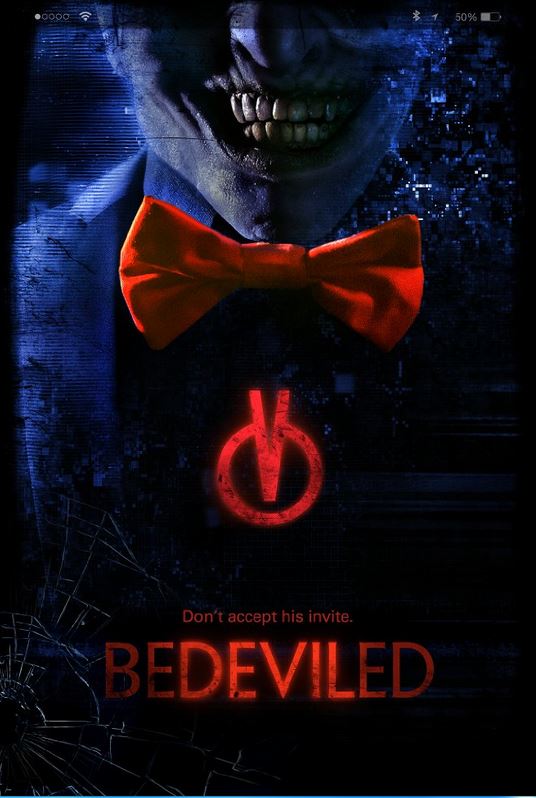 Five friends are terrorized by a supernatural entity after downloading a mysterious app.

I sighed a lot while watching ‘Bedeviled’. I wasn’t star-struck, love-struck or any other struck for that matter….it was just a boring, predictable exercise in fighting to stay awake. Comprised of equal parts ambition and annoyance, its a film that never quite seems to get where it’s going. The plot unfolds like this: We open on a laconic young woman, alone in a room, staring out a window. The room is quite dark (remember that:there’s a MAJOR overuse of darkness in this movie, which doesn’t yield its intended effect, trust me), when Mom appears in the room’s doorway stating, ‘Hey, I left a chicken casserole in the oven.’ When I heard that, I knew we were off to the races! A few moments later, we’re treated to an awkward jump scare and then the young woman decides to wander about the VERY DARK house for who-knows-why. After some time, she is met in a large dining room by Mr. Bedeviled himself, who admittedly looks a wee bit creepy. The girl screams and offers the obligatory run-away-fast shtick as instructed in her copy of the script…….<yawn> and <double yawn>.

Essentially, Hollywood has struggled with the mechanism of phone/computer/app as bringer-of-evil….and nothing new is accomplished here, trust me. The main antagonist, Mr. Bedeviled, is focused upon terrorizing and making the 5 teens as miserable as possible….but I rarely found myself caring one way or another.

I’ll be quick to admit: about an hour into the film, a few things start to bind (in a good way). Admittedly, the young actors cast in this one give their absolute best to play their respective roles to the hilt, but there’s only so much pie one can make from mud! A core mechanism is the presence of an app loaded on each of the teenagers’ individual phones. It features a silhouetted man, (think Apple’s Siri, but far creepier!) who chats with the characters, mostly at the oddest of times. The taunting, ‘bedeviling’ (see what I did there?) voice does smack of the phone voice from ‘Scream’ (which is more of a positive than not here) and he often says provocative and titillating things to each character, ostensibly to get a visceral response from them. The young Saxon Sharbino, playing our lead heroine , puts her heart and soul into this one, but it still isn’t enough to save this flick, sadly.

At various times, an assortment of creepy clowns appear, generally when Mr. Bedeviled is near. While these bits are scary, they often don’t really glue well with the plot when they pop up. As one might guess, Mr. Bedeviled begins invading the characters’ lives where he’s not welcome. He readily posts an intimate video of a couple ‘interacting’ to the whole danged internet, which of course sets in motion all manner of anger and humiliation! The directors use this odd little convention where the barely show or only show a part of the antagonist’s face. Now, that is often used and can be quite scary, if played properly. But this film (it’s hard to explain) often changes the faces of the bad guy(s). Sometimes, its a horde a near-faceless women, other times, its a creepy granny, then later Mr. Bedeviled himself or some member of the clown bevvy. It ends up feeling awkward, confusing or both. Mind you, the characters’ phones are an integral part of all these shenanigans, but it stills comes to a sum total of who cares?

One of the group’s members is the obligatory tech geek, played by the capable Mitchell Edwards. He really puts his back into figuring out how the app works and manages to fill their collective lives with so much harassment and misery. During a key scene of him doing that very thing, a group member throws a wall-eyed tantrum, and stomps on his own phone, only for it to yell, squall and repair itself to good health in the blink of an eye. When this happens, the other members know this isn’t some standard app they’re dealing with. One might guess correctly that things don’t work out well for a few cast members, but heck if I cared! The main heroine is left to chat with Mom via smart phone from her college dorm at the end and yes, there is a teeny twist, but it barely registers anyway.

All things considered, if you find this DVD at a flea market for a buck (and you have 29 bucks in your wallet), sure…..pick it up! Otherwise, just watch a sunset…..it’ll be much more meaningful!