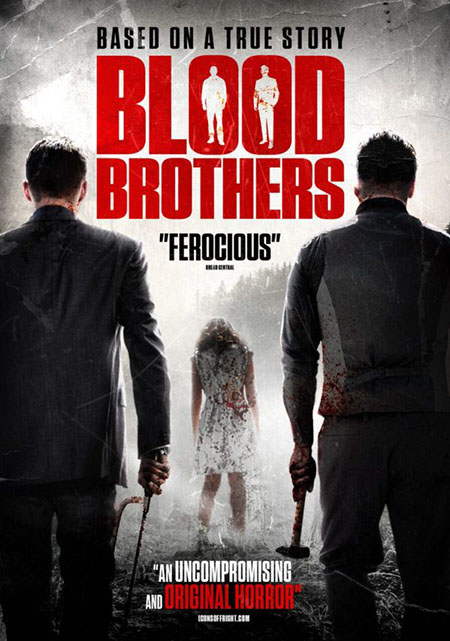 Two brothers, Charles and Thomas, who feel they are of superior intelligence, concoct a deadly game of murder to fulfill their devious fantasies, but doing so derails their relationship with horrifying results.

“Blood Brothers”, is a fantastic piece of art, and I do consider it art. Writer and director Jose Prendes takes the audience on a stylized and artistic journey with two murder bound brothers. We start by watching the brothers in a fantastic scene where they torment a drug addict and induce him to mutilate himself. The brother’s convince the addict to cut off the tip of his pinky with a rock for a promised amount of drugs, after the addict beats and rips the tip of his finger off with a rock they laugh and say that all they had was a bag of salt. 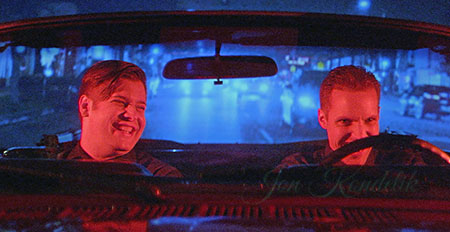 The movie progresses with strong psycho-sexual themes, one of the brother’s fantasizes about stabbing a waitress to death with a butter knife in a way where she orgasms as she’s being stabbed. We then watch as the shy gentler brother awkwardly courts the same waitress, with some dialogue that likens to a first teenage date.

This leads to jealously and conflict between the two brothers, as one seeks to kill the object of the others affection. They end up murdering the woman, and with that there becomes a role reversal of sorts. The more sadistic brother becomes plagued with nightmares of their victim coming for him, whereas the gentler brother seeks a new victim. The younger brother picks a hooker who insulted them earlier in the film, and when he attempts to attack her she beats him unconscious with a hotel telephone. Both brothers are sent into down spirals after this, one brother driven mad by guilt, the other takes to his newly discovered homicidal prowess. 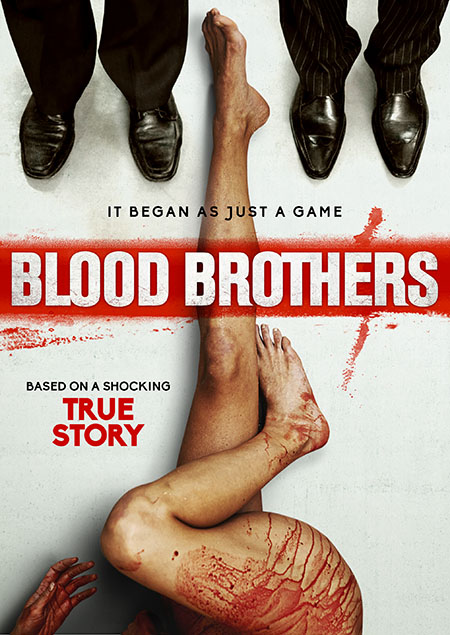 This movie is art and character driven, having said that, my biggest critique with the film is the brothers acting. We are immediately lead to believe that they are supposed to be psychopaths, but they behave in a dry nearly stunned way. The acting comes across awkward and forced in a lot of scenes where they are very awkward in their interaction with the world around them. The true danger of psychopaths really lies in how subtle their manipulations are, they learn to camouflage themselves with the world around them by pretending to be more human. All of the supporting actors were spot on in their performance, including portrayals of absolute fear and desperation.

The technical aspects of this movie were all very well crafted with intent, Jose Prendes really crafts a world for these characters with everything he does. He used a solid amount of lighting and filter effects to create the ambience for each scene. On top of that he also used classic stock driving footage to green screen behind his actors in car scenes. I did not catch that at first, that it hit me that the cars about to pass the brothers who were sitting in a parked car, was a 1930’s ford. For as small of a budget that they had to work with, Jose Prendes creates a visual feast for the audience.

There are a lot of practical special effects in “Blood Brothers”, throughout the course of the film a dead naked woman flashes across the screen with veiny pale skin. This is the very first special effects shot of the film, and incidentally the very beginning.

From there we are treated to maiming, scars, and blood. This is not quite a gore fest though, everything falls together in this masterful film of two brothers inching towards the goal of becoming murderers. Including nightmare sequences where the lead actress is zombie hunting down the more sadistic of the two brothers. My absolutely favorite moment in this movie is when the older brother is hallucinating and rips open his own chest and millions of butterflies spill out.

Watch this movie, I want this director to succeed and I liked this movie enough to buy it, its worth adding to the collection. If Jose Prendes gets a larger budget and the freedom to make what he wants in the future we can seriously expect a new icon in horror. Grab a copy and settle in folks, you are in for a treat here.