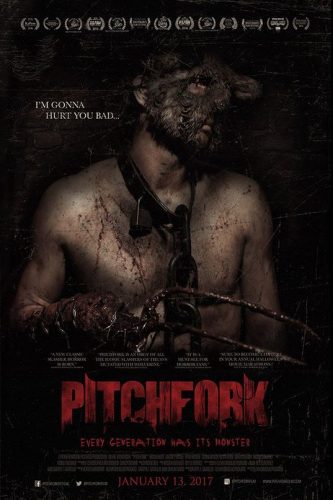 A group of friends return home with a friend to help him share a secret only to learn that sometimes older secrets are even more deadly.

Director Glenn Douglas Packard introduces us to a new character. Horror fans meet Pitchfork (Daniel Wilkinson) This film was shot in twenty-one days by Glenn Douglas Packard with one camera. It was also filmed at his family/childhood farm where he grew up. The film starts off with the song, “He’s Got the Whole World in His Hands,” which is sung airy and breathy to emphasize the country charm. 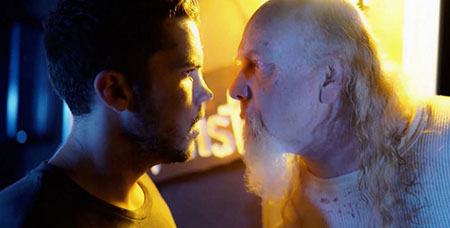 Then we meet the first character who is out walking her dog, Country and she is on the phone, taking a nice walk in the country. Which for those of us that are horror fans we know to quote the great Randy of Scream, “that is a no no.” The setting is different though although I was disturbed already and rooting for the dog. (Go Country, Run. Leave her! Sorry) you hear the whimpering and of course because she is a good dog owner, she goes to look for the dog in what looks like a building Jigsaw would have loved if he could get his hands on it. 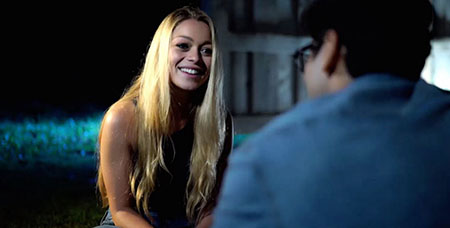 No need to give away details but the pretty girl should have stayed on her path and kept her dog on a leash. We meet a group of friends with what looks like the ultimate party van although I still stand by my motto or was it Sigourney Weaver’s motto? “Don’t park next to vans.” (Even if they look like a party waiting to happen) It is a modern group of young people who are heading to the same farm. The slow-motion and aerial shots give you the vast feel of just how big, creepy and how there may not be a ton of great places to hide.

Hunter Killian (Brian Raetz) begins to tell his coming out story as well. He is from a small town and this is also part of the director’s own story. It is beautifully told by Packard. He explains his homecoming and what it means to him to be there with his friends. There are a ton of cool images in the film. Random and small yet creepy. “It’s like a cult or something.” Remember, one camera so it is interesting to see the various shots although Packard said there was a drone involved.

“Small town views are not like New York City view.” 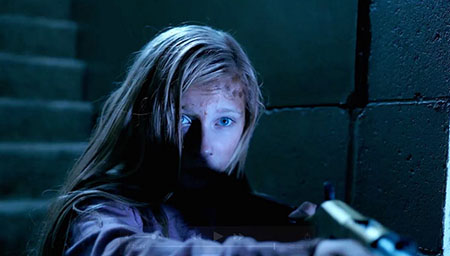 The film has the stereotypical characters. The jock, the cool girl, the couple so in love and the tough dude, Rocky (Keith Webb) they continue the journey to the farm which doesn’t look much what you may imagine an old creepy farm to look like. Hunter arrives and his parents look thrilled to see him and his “gang.” “It’s like The Breakfast Club just puked on my lawn.”

Hunter introduces his parents to the gang because let’s face it you need to know who Pitchfork is going to be killing. Gordon (Vibhu Raghave), Clare (Lindsey Nicole), Matt (Ryan Moore), Rocky (Keith Webb), Janelle (Sheila Leason) – I am rooting for you Janelle, don’t let us Janel’s down! Lenox (Celina Beach) and Flo (Nicole Dambro). Clare is kind and thanks Hunter’s family for the letting them stay but the father doesn’t seem thrilled.

Jenny (Addisyn Wallace) plays the sister and animal whisperer. As Hunter and his sister chat the horse is freaking out. They begin to unload and turn the barn into party central while Pa keeps a stern look on his face. The rowdy group decorates, gets pizza, beer, lights. You know the essentials for a soon to be murder spree. The slow steady shots show the scenery and the buildings are more than just appearances in the film but actual characters.

Hunter has a heart-felt chat with his mom and she tells him to give his father some time. You can definitely feel the choreographer in Packard as the barn dance starts. You get to see the talent in this young cast as they break out in a dance montage. It kinds of gives you the sense that they want you to like these characters and know they can throw down. The music stops as one of the “Children of the Corn” show up. It tends to shock the city-folks. There are fun moments and taking selfies while saying, “corn field” when well they should have got back in the Scooby mobile and hauled ass.

The father gives off a creepy vibe throughout the entire film. Jenny heads off to bed and of course wants her closet checked and of course under the bed! (Should have looked there first)

You get a feeling during the entire movie that something is just lurking and waiting.  Her father tells her, “There are no monsters in your bedroom.” Boy was he wrong! The Pitchfork coming up through the bed felt like a beautiful homage to “A Nightmare on Elm Street.” Why do people go in basements with only a flashlight? You should at least take a baseball bat or just don’t go in the basement. It is safer that way. “Someone is in a whole heap of trouble!” Ma is pissed due to the broken bloody glass in the basement. (There would be a whole lot of curse words) Pitchfork finally makes his appearance and let’s just say, Ma is a in a whole heap of trouble.

Pitchfork is human with a pitchfork as his weapon of choice. We get the barn sex scene and the happy couple just signing their death warrant. There is a slight difference in this film that one of the characters is pregnant. Of course party time goes a little crazy along with Clare (we can blame Matt) Hunter shuts the party down for the night.

There are a few sort of stalled moments but Packard makes up for it with the creepy shots. It gives a sense that this stuff could happen and an uneasy feeling. I somehow wanted Dean and Sam Winchester to show up. We get a closer, creepier look at Pitchfork and realize his hand is a Pitchfork and now Rocky and Janelle are in big trouble. The close up shots of the pitchfork make you feel uneasy in such a good way. You want to root for these characters but you also know they on Pitchfork’s turf and damn you Rocky!

So chaos takes over, Hunter wants to “call the police” and we all know how that always goes. One or two officer’s show up and well. Clare tries to get her friends attention and get them to, oh I don’t know? RUN! Pitchfork works fast though and he seems to have pretty good aim. When you find your friend with an AX in their back, don’t try and drag them away, just RUN!

The film is also shot with different lighting colors including a green hue and blue to give off the vibe of the killer can do what he wants. Flo is sort of the Tatum Riley (SCREAM) of the bunch. She is tough, sarcastic and witty but who runs in the corn field? Come on! Rose McGowan would do no such thing. Corn fields are not the best hiding places either. 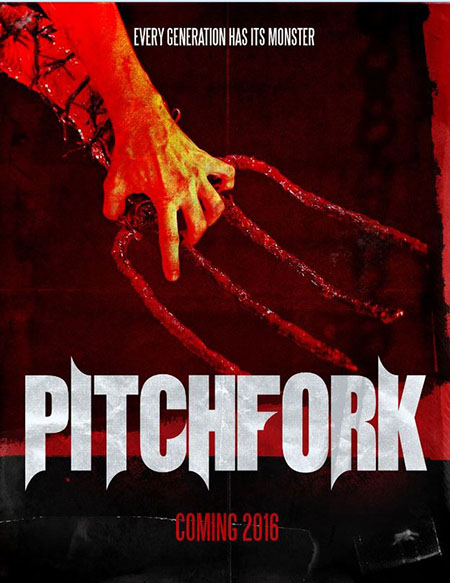 Flo fights! We have to give her that much, she does at least fight. Much predicted, two officers show up and “survey the area! The “Cops and Doughnuts” box shows that Packard has humor and appreciation for the genre. Of course there is the extra creepy place where Pitchfork is disposing and taking his victims.

Jenny tries the old let’s talk to the killer and try and relate but he isn’t having that. Hunter finds his sister, his mom and his father who is semi-alive. His father gives him a speech and asks Hunter to “finish what Pitchfork started.” So far, the sister, Hunter and Clare seem to be the survivors. Hunter winds up the barn and tries to go all Daryl Dixon (sleeves and all) on Pitchfork.

Pitchfork seems to enjoy barbed wire (Do you think he is a Negan fan?) Pitchfork taunts and creepily fawns over who he is killing. Matt winds up fighting, well kind of fighting Pitchfork who now shows a love for shovels and any farm related things you can stab people with. Oh and let’s not forget the creepy neighbor who is no help at all. Ma and Pa Holister who may have seen “Texas Chainsaw Massacre” one or two times. We meet Pitchforks family and boy are they a hoot. There are staple guns involved, duct tape, knives and enough crazy. It is a modern day “American Gothic.”

Rachel Carter portrays Ma and her level of crazy is off the charts. She takes it to the next level. Andrew Dawe-Collins plays Pa with an equal level of great insanity. This is definitely something new and for horror fans they will notice the various levels of homage and the build up to Pitchfork taking down Ma should definitely lead up to a sequel so grab the popcorn, turn off the lights and watch PITCHFORK.