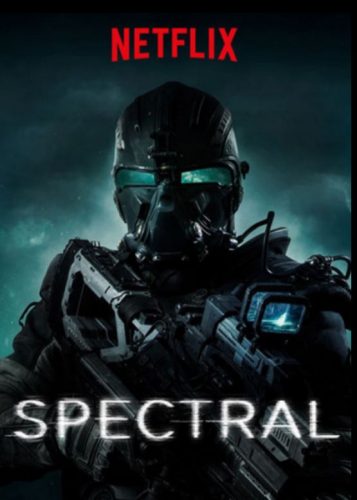 A sci-fi/thriller story centered on a special-ops team that is dispatched to fight supernatural beings.

The cool thing about science fiction—whether it be timeless literature, matinee classics, or episodic series delivered through popular streaming services—is that there’s almost always more there than meets the eye. Damn the budget, the star power, the pedigree, and—yes—even the quality, science fiction is usually about ideas. Even the bad ones generally have something to say.

The 2016 release Spectral is no different.

Starring James Badger Dale, Emily Mortimer, Bruce Greenwood, and a host of recognizable supporting players, Spectral unfolds in a war-torn European country, where U.S. Special-Ops have stumbled across an enemy power that they are wholly unprepared for. In the midst of a battle with local insurgents, an American soldier is killed by some sort of, um, spectral force. Is it a ghost? A demon? Or some sort of super-weapon designed by a hostile foreign power? The CIA expert (Emily Mortimer) believes the latter, specifically that the mostly-invisible but highly-lethal forces are enemy combatants protected by some high-tech cloaking armor. The locals think differently, though, believing the spectral forces to be agonized souls trapped between life and death by the war that rages through their country.

Enter the Virginia-based weapons expert (James Badger Dale), who embeds with the U.S. forces and ends up developing the leading-edge firepower that can potentially stop the otherwise unstoppable enemy.

Despite the top-notch cast (Badger Dale, Mortimer, Greenwood, and co. all have terrific credentials and perform solidly here), Spectral—superficially, at least—is pretty darn silly. For starters, the jarheads act just as one-dimensional as you might expect them to, mimicking their predecessors from a whole host of military/sci-fi flicks from Starship Troopers to Avatar. More cringe-worthy, though, is the ultimate revelation of the source of the enemy power. While the concept is interesting (and a spoiler, so I won’t go into too much detail here), the result is that all the soldiers and scientists end up referring to the evil, indestructible beings as “condensate”, which sounds decidedly unthreatening…like something you might wipe off your car window on a humid day. In fact, when the super-genius weapons guy ends up figuring out what they are dealing with and develops the arsenal of weapons to fight back (remind me again how the most advanced weapons in the history of mankind can be conceived, designed, and mass manufactured in a few hours in a bombed-out refugee camp?), the epic final battle ends up feeling like a clash between elite U.S. soldiers and a bunch of creepy-looking water balloons. But, you know, evil water balloons.

Silliness aside, though, Spectral isn’t a bad flick.

In addition to the solid performances, commercial director Nic Mathieu—making his feature debut here—has crafted a pretty good-looking film, from the authentic, gritty locations shot in Budapest, Hungary, to the well-executed practical effects and ghostly digital effects (I refuse to refer to the creatures as “condensate”). Mathieu appears to bring a steady, professional hand as a filmmakers, and all the talent around him here certainly did not hurt.

What’s most engaging about Spectral, however, is more the ideas in which it traffics.  Spectral can be read in any number of ways.

It may be a meditation on the horrors of war. Even though the narrative ultimately moves the film in another direction, the early mythology that Spectral begins to weave about war trapping the souls of its victims somewhere between life and death is ripe for exploration in any genre, but especially in science fiction.

It may also be about the idea that modern warfare—or at least our perceptions of it—are changing radically in the 21st century. After a series of misguided military “adventures” in Afghanistan, Iraq, and—going back a ways to the one that continues to hang over our heads half a century later—Vietnam, most American civilians tend to think of war, including wars fought by U.S. soldiers, as something that happens somewhere else. Spectral’s war is fought in the European theater, but its enemy apparitions are posited to feed off of the energy of war to grow stronger and reproduce…and their ultimate threat lies in the risk that they might spread throughout Europe and ultimately make their way across an ocean and to the homeland. If that’s not a metaphor for radicalization and terrorism, I don’t know what is.

Or Spectral may be a more traditional sci-fi story, ruminating on the horrors of technology and the arrogance of man thinking that he can somehow control it. Much of Spectral’s third act feels like an allegory about the dangers of nuclear or biological weapons and the creeping risk not that they might actually be used but that an accident might unintentionally unleash them on the world, letting the proverbial genie out of the bottle with no way to get it back inside. This has been the stuff of science fiction cinema for almost as long as it has existed, but it still never gets old.

Most likely, though, Spectral may be dipping its toes in several of these philosophical pools, and the end result is more satisfying than not.